All you need to know about Heat Rash 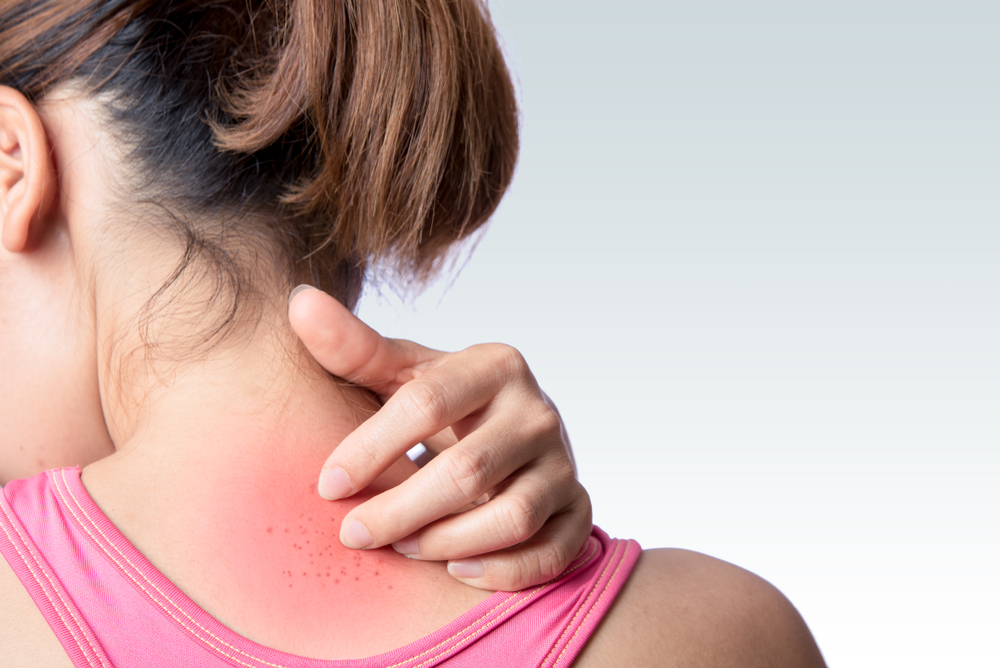 There are many types of rashes that could affect your skin. Each kind of rash could have different effects. Some of them could make you feel more uncomfortable than the others, while some could be more painful and others could even make you worry about them.

Heat rash occurs when the body needs to sweat, such as when the weather is hot or when you are doing physical activities and the pores are blocked, due to various reasons. As the sweat cannot be eliminated from the body, heat rash might be ignited.

Heat rash can affect both adults and children and all racial groups. For example, the mildest type of heat rash, miliaria crystallina affects about 9% of the newborn babies, and 30% of the adults who are exposed to hot weather, such as those who live in the tropical regions of the World.

Sometimes, the heat rash can easily be confused with a cluster of pimples.

Heat rash is also known as miliaria or prickly heat. Based on how severe the rash bout is and how affected are the sweat ducts, the heat rash can be classified into:

It is important to be informed that everybody can be affected by heat rash:

Usually, heat rash occurs in the areas of the body that rub together. Heat rash can also occur as a result of friction between the thighs and the jeans, for example, but it can also be developed due to increased temperature of the body. Most often, people develop heat rash between the inner thighs or under the arms.

The symptoms depend on which kind of heat rash you develop. Even if all types of heat rash affect the skin and could be uncomfortable, some could alter it in a more severe way:

Symptoms that can be associated to heat rash and that could indicate a potential danger are:

The usual symptoms of the heat rash consist of developing red bumps on the affected area of skin. Beside the fact that the skin is visibly inflamed, the suffering person could also feel the area itchy or even prickly.

The bumps are related to the most common type of heat rash, medically known as miliaria rubra and it affects children and adults, as well.

The bumps of heat rash usually appear as a result of increased temperature of the skin, due to exposure to a considerably warm climate or increased friction between the skin and the clothes or any other material.

The heat rash bumps will disappear by default if the skin gets the chance to cool down or if the friction between the affected area and the clothes is decreasing.

The heat rash with blisters is a skin condition related to miliaria crystallina. The blisters of the heat rash are fluid-filled and easy to break.

The blisters occur as a result of intense rubbing between the skin and other materials, pieces of clothing or shoes, for example.

The blisters collect fluid that has the purpose of protecting the tissue underneath. The liquid that fulfills the blister is called serum. The affected tissue will be kept clear and it will have all the conditions that are necessary in order to heal.

Heat rash or miliaria, as it is medically referred to, is a reaction of the skin resulted from perspiration that has not been eliminated. Usually, this irritation occurs when clothing pieces or other materials block your pores and the sweat remains blocked in within the skin. For example, the heat rash on face could be stimulated by wearing masks or scarves.

The sweat glands that are not eliminating the perspiration get inflamed and will irritate the surrounding areas of skin. Therefore, the skin will become red and possibly itchy.

It is important to know that heat rash is not dangerous, but it can truly be unpleasant. As you have pores all over the body, the heat rash can occur on any part of it, even the face.

The heat rash on face usually appears as a conglomeration of red bumps. The marks of heat rash on face could be, sometimes, even filled with fluid, just like blisters. In some very rare situations, the heat rash papules could transform into pustules. This means that the red and itchy spots become pus-filled.

Your face could be affected by four types of heat rash:

Each type of heat rash affects differently the skin of your face, as it follows: 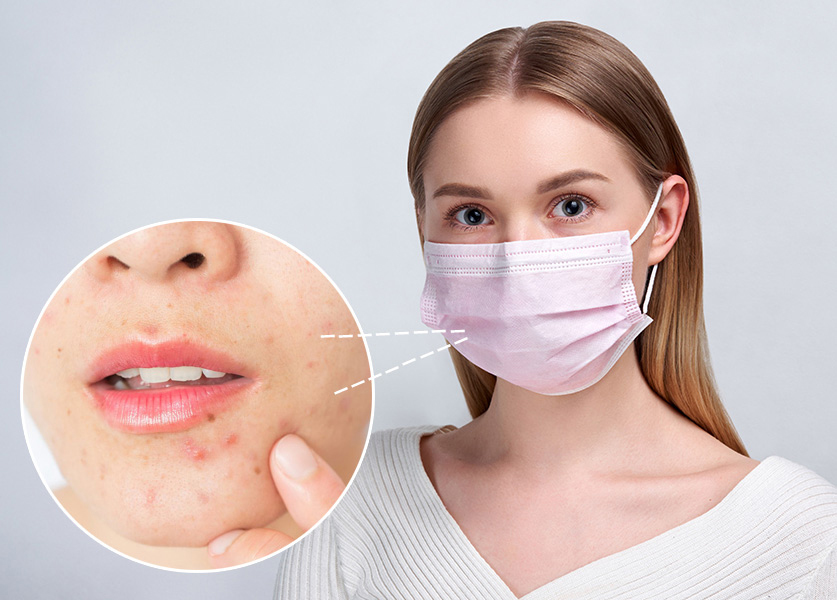 Heat rash normally occurs in spots that are covered up by clothes. The sweat glands can get blocked by the clothing or other skin coverings that you wear and so they become inflamed.

Usually, heat rash is a result of wearing tight clothes, for example the work-out equipment. In order to develop heat rash on face, you need to wear masks or other types of face coverings for long periods.

The perfect conjuncture for heat rash on face to develop is when you are wearing a mask or other cover for your face during work-out sessions or in a warm climate. The perspiration is blocked within the sweat ducts and get stuck.
Also, heat rash can actually occur at any time, during any type of weather as a result of friction with the mask or with another skin cover that you wear, a scarf, for example.

It is important to leave the inflamed area unbothered. You should leave the area cool and dry.

If you need to wear a mask, make sure that you are carefully washing it after use or if it is a single use mask, ensure you dispose it after using it. Also, it is best to have more clean masks and to change them during the day, in order to avoid saliva, mucus or other substances to transfer from the mask to the skin. Also, it is very important to make sure that the mask is not rubbing your skin.

If you get to see a doctor, he will carefully analyze the affected skin. Then, he will ask you when did the irritation occur, what were you doing prior to the inflammation and what were you wearing. Based on the answers that you provide him and the analyze the doctor performs, he will be able to say if what your face is affected of is heat rash or not.

The heat rash on neck is usually a bout of miliaria crystallina. It has the same causes as the heat rash on face, as the mask or scarf that you wear could cover the neck and produce friction with skin of the neck, as well. Also, the same face layers that cover your neck could obstruct the process of eliminating perspiration and ignite the inflammation and irritation of the skin.

In order to reduce the inflammation, it would be best to wear, for one or two days, some more loose trousers and underpants. If there is no friction between the clothes and the inflamed area, the skin would have the necessarily amount of space to normally breathe and to heal.

Normally, heat rash can occur anywhere on your body, as it is an effect of the not eliminated sweat.

Heat rash can also affect the skin of your legs. The usual symptoms of this skin inflammation consist of red bumps and an itchy feeling. The affected area of heat rash on legs consists of reddened skin that contains small blisters. Probably, if you have heat rash on the legs, the inflammation has occurred after wearing tight trousers and the air did not have enough space to circulate. 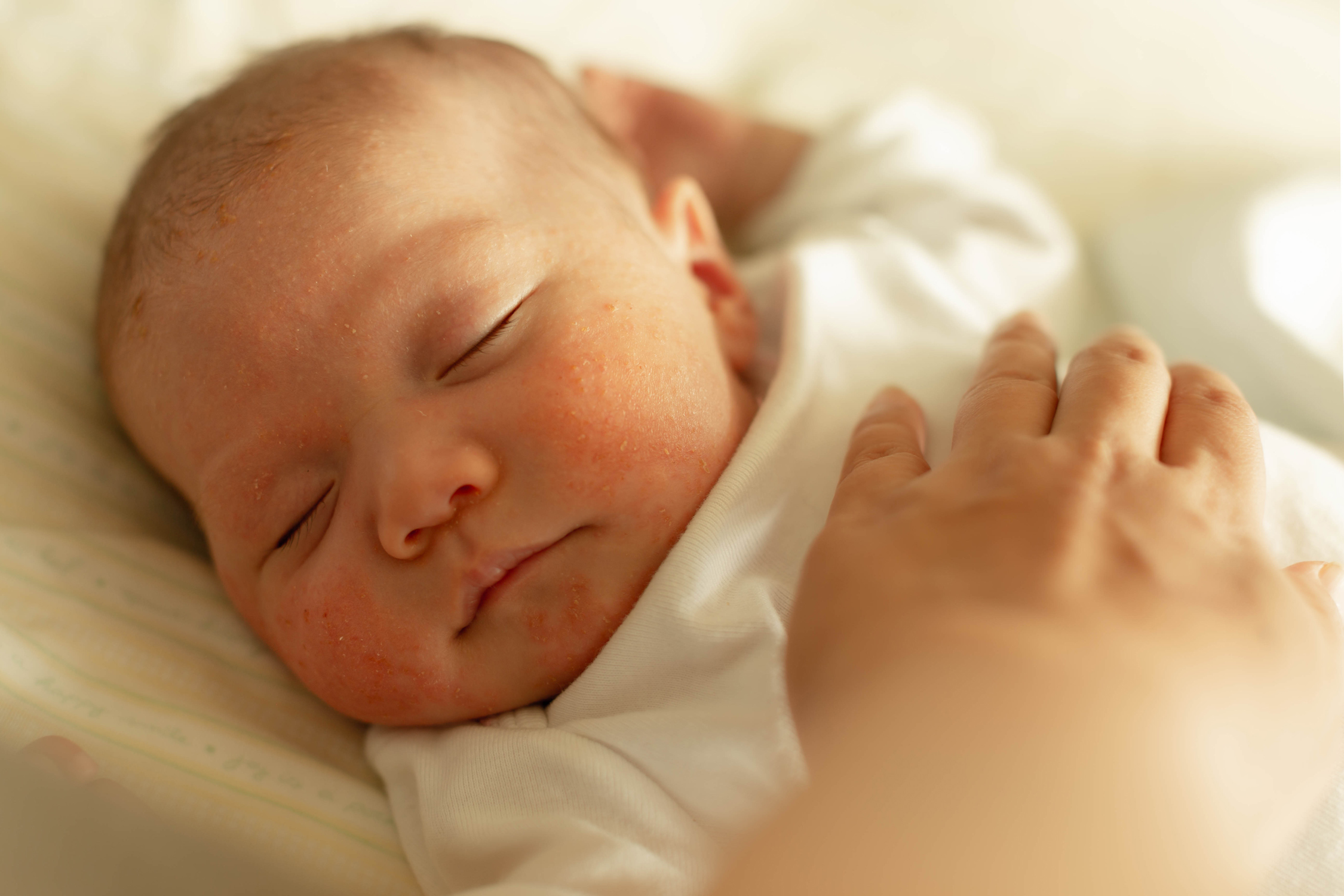 It is a fact that babies are prone to develop rashes in the early days of their lives. The most common areas where they develop rashes are on the necks, but also in the skin folds of the armpits, elbows or thighs.

Heat rash also affects the babies. When they overheat, they develop a smooth pink rash.

The main heat rash symptoms on babies consist of tiny pink bumps on the neck, chest or the upper back. The rash can also be itchy and it can present some small water blisters. The heat rash affects the babies during very warm and humid weather or after exposure to the sun.

The heat rash usually disappears within a few days. In some situations, the heat rash cannot disappear as soon as you would like to. In such cases, the heat rash can become infected and it can even lead to scarring. Therefore, if you notice that your bout of heat rash is persistent, you should consult a doctor.

The visit to the doctor should be pretty quick, as the heat rash is not a dangerous condition of the skin and it should easily be diagnosed and treated.

As there are no specific tests that could validate the heat rash as the skin condition that affects you, the doctor will carefully inspect the affected area of your skin and will ask you about the activities that you were performing before the occurrence of the irritation and what were you wearing at the time. In most of the cases, the doctor will easily identify the heat rash.

Normally, any bout of heat rash should disappear within a couple of days. In order for the bout to easily calm out, you should avoid touching the area and you should make sure that it is dry and unexposed to heating.

As none of the heat rash types are dangerous, you should be able to take care of it at the comfort of your house.

The best things that you can do, in order to treat the heat rash at home, are:

In very rare cases, you will need over-the-counter treatments, in order to improve the symptoms of the heat rash. If you find yourself in the situation of needing medicines to treat the heat rush, you need to consult your pharmacist or doctor. The doctor usually recommends calamine lotion or antihistamine creams to relieve the itching and to calm the rash.

If you find yourself suffering from heat rash, it is very important to find the causes of it. Avoiding the factors that ignite the irritation and inflammation of your skin could easily make your life more comfortable.

Mostly, try to avoid exposure to heat and the tight clothes. If you truly need to perform different activities under the hot sun, it is highly recommended to take cool showers afterwards. The loose clothes can also keep the sweat glands from becoming blocked.

Heat rash is an inflammation of the skin that is mostly stimulated by exposure to heat or friction with tight clothes. Therefore, anyone can get affected by the heat rash on different parts of the body.

There are different types of heat rash, which are medically known as miliaria crystallina, miliaria rubra, miliaria pustulosa and miliaria profunda. All of these heat rash types have different ways of affecting your skin, but none of them is a potential danger for your health.

It is important to find out which are the exact causes of your heat rash bout and to try to avoid them, in order to maintain the normal process of eliminating sweat and to keep your skin healthy.