All you need to know about Sinusitis 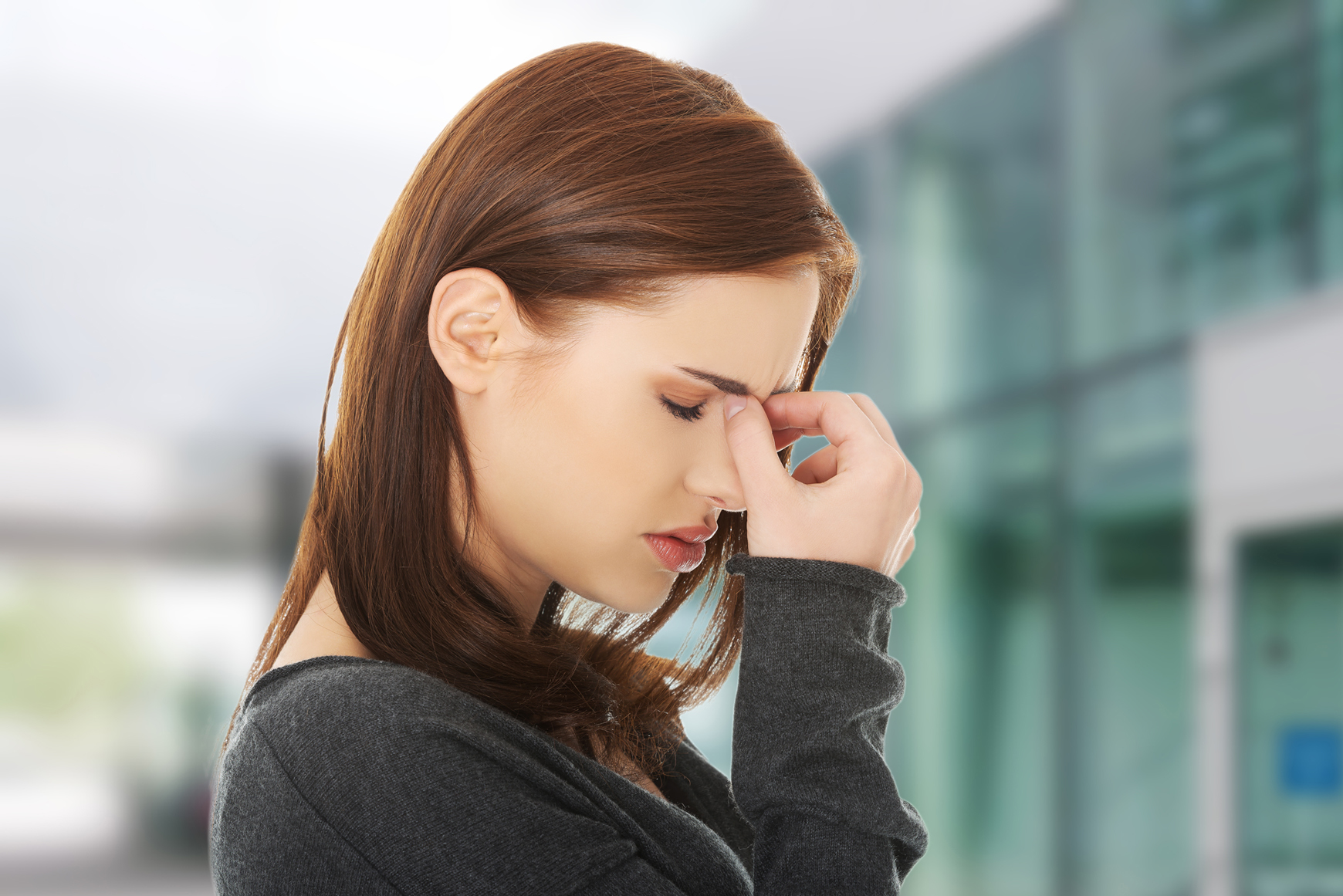 Sinusitis is an inflammation of the tissue around and between the sinuses. The sinuses consist of empty cavities which are located in the area of the nose, behind the cheekbones, between the eyes and in the forehead. When these cavities are healthy, they are filled with air.

The role of sinuses is to create mucus. Healthy sinuses create thin mucus that slowly drains throughout the nose channels in order to keep them moist and to filter out the harmful particles of polluted air, dust or allergens that could get into your nose and even reach the blood and they also keep nose away from bacteria.

Healthy sinuses, normally, are filled with air. But they can get blocked and liquid filled. This is a situation that could lead to bacterial sinusitis, as the sinuses become a very attractive place for bacterial development.

Anyone can suffer from sinusitis. Those who suffer from nasal allergies, polyps, asthma and abnormal nose structures are prone to get affected by sinusitis. Smoking is another factor that can increase one’s chances to develop sinusitis.

Also, sinusitis can occur as a result of an infection, due to a virus, bacteria or fungus. Such infections can create the perfect environment for sinusitis to occur, as the sinuses become inflamed and the nasal channels get blocked. Therefore, the drainage flow of mucus is considerably affected.

Moreover, it is very important to know that sinusitis is not contagious. Though, the viruses that cause the sinusitis bouts could be easily transmitted. Therefore, it is important to always wash your hands and try to protect those around you.

Where are the sinuses located?

The sinuses are quite complex as they are spread from the nose’s level towards the forehead. The names of each type of sinuses are given after the bones in whose structure they locate. The sinuses are:

Generally, the sinus that gets most often infected is in the maxillary cavity, which is also the most considerable sinus in terms of dimensions.

As the sinuses are a complex system of cavities, there are different causes of inflammation. Therefore, we will discuss about the different types of sinusitis.

The causes of acute sinusitis usually are normal colds, allergies or viruses. It can also be started by a bacterial or fungus infection that make blocks the sinuses and let them swell.

The treatment of acute sinusitis consists of:

Acute sinusitis could also be treated with antibiotics, but just in case that the cause for the sinusitis episode is a bacterial infection. Otherwise, antibiotics have no effect on the condition.

The subacute sinusitis is happening when the symptoms tend to last between a month and three months. Mostly, it appears due to seasonal allergies and bacterial infections. 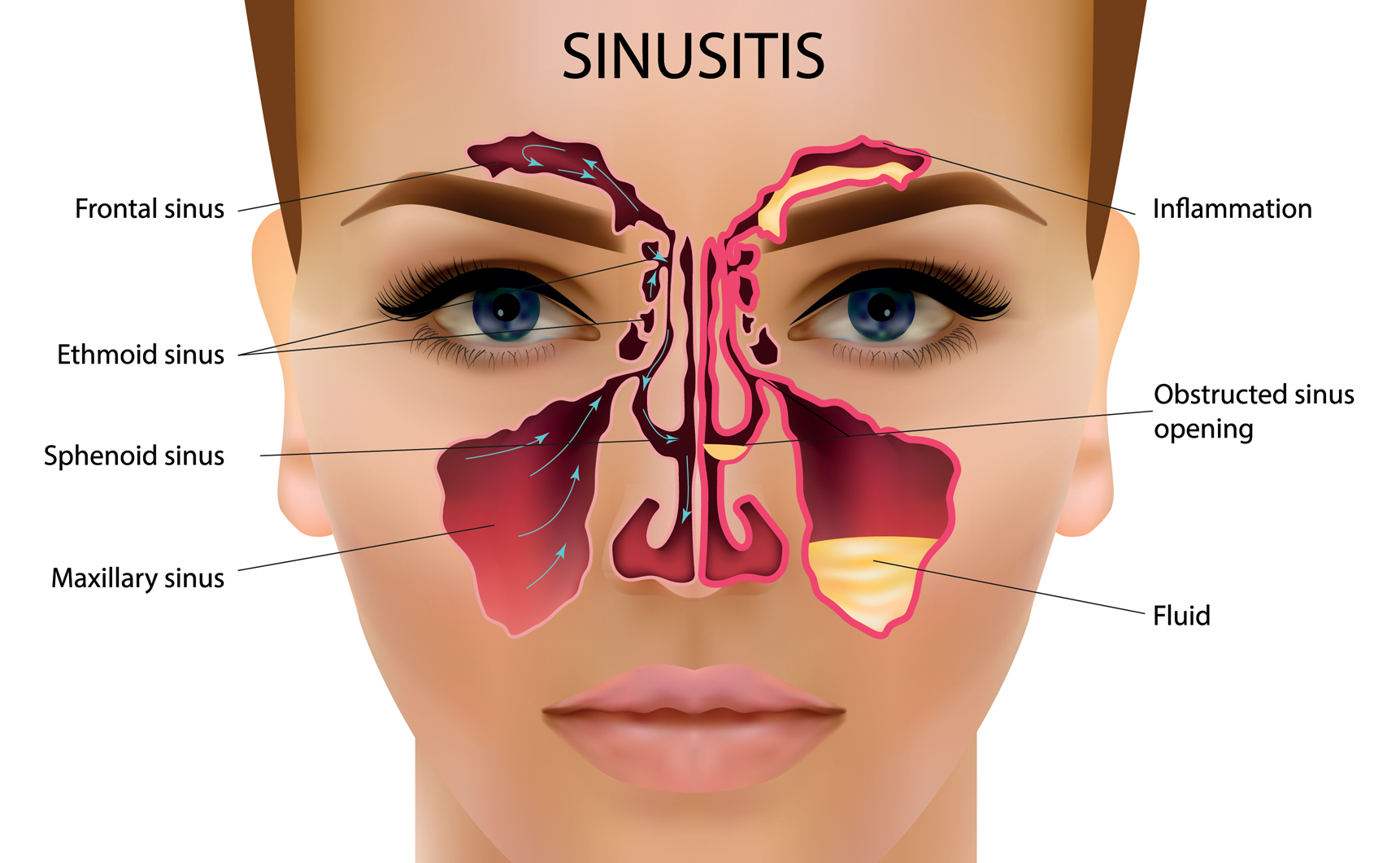 There exist more factors which could contribute to the ignition of chronic sinusitis. We can enumerate them:

The symptoms of chronic sinusitis usually are:

How is chronic sinusitis diagnosed?

The chronic sinusitis can be diagnosed by the specialists only when the symptoms have been active for more than three months.

Sometimes, the process of diagnosing involves an endoscopy. This means that the ENT (ear, nose and throat) doctor will look in your nose using a very flexible and small-scale device which allows him to get a sight of the depths of your nose and a sight of your sinuses.

Moreover, in order to fully perform the diagnose, the doctors might also need to perform a biopsy. This means that they will take samples of tissue or bone and they will examine them under the microscope.

It is very important to consult a specialist if you have symptoms such as headaches, facial pain or tooth pain. Moreover, it is very important to consult the specialist if you have tried therapies for the symptoms afore mentioned and they had no effect. Though the afore mentioned pains could be symptoms of other different conditions, they could also be symptoms of chronic sinusitis. The diagnosing process might be a little bit difficult for a healthcare provider, therefore consulting an ENT doctor will help you improve your health.

Normally, chronic sinusitis is not a result of a bacterial infection. But sometimes it can be. In such situations, the doctor will prescribe an antibiotic, such as amoxicillin.

Otherwise, the most common procedures known for sinusitis treatment and its management are:

Avoid the potential triggers, such as allergies;

Use the intranasal corticosteroid sprays and leukotriene antagonists, in order to reduce the levels of inflammation.

Treat the conditions that could stimulate the occurrence of chronic sinusitis, such as allergies, asthma or immune deficiency conditions, with topical antihistamine, for example

Correct the irregularities of deviated nasal septum or polyps through surgical intervention.

Perform a balloon sinus ostial dilation, which consists of introducing a balloon into the affected sinus. As it inflates, it creates more space in the sinus.

Chronic sinusitis can be managed and fully cured. In order to do so, it is very probably that you will need to try out multiple treatments.

Moreover, it is important to know that chronic sinusitis in not necessarily a life-threatening condition, but it can be truly harmful sometimes. The infection that causes the chronic sinusitis can spread towards the bones, brain or even spine. 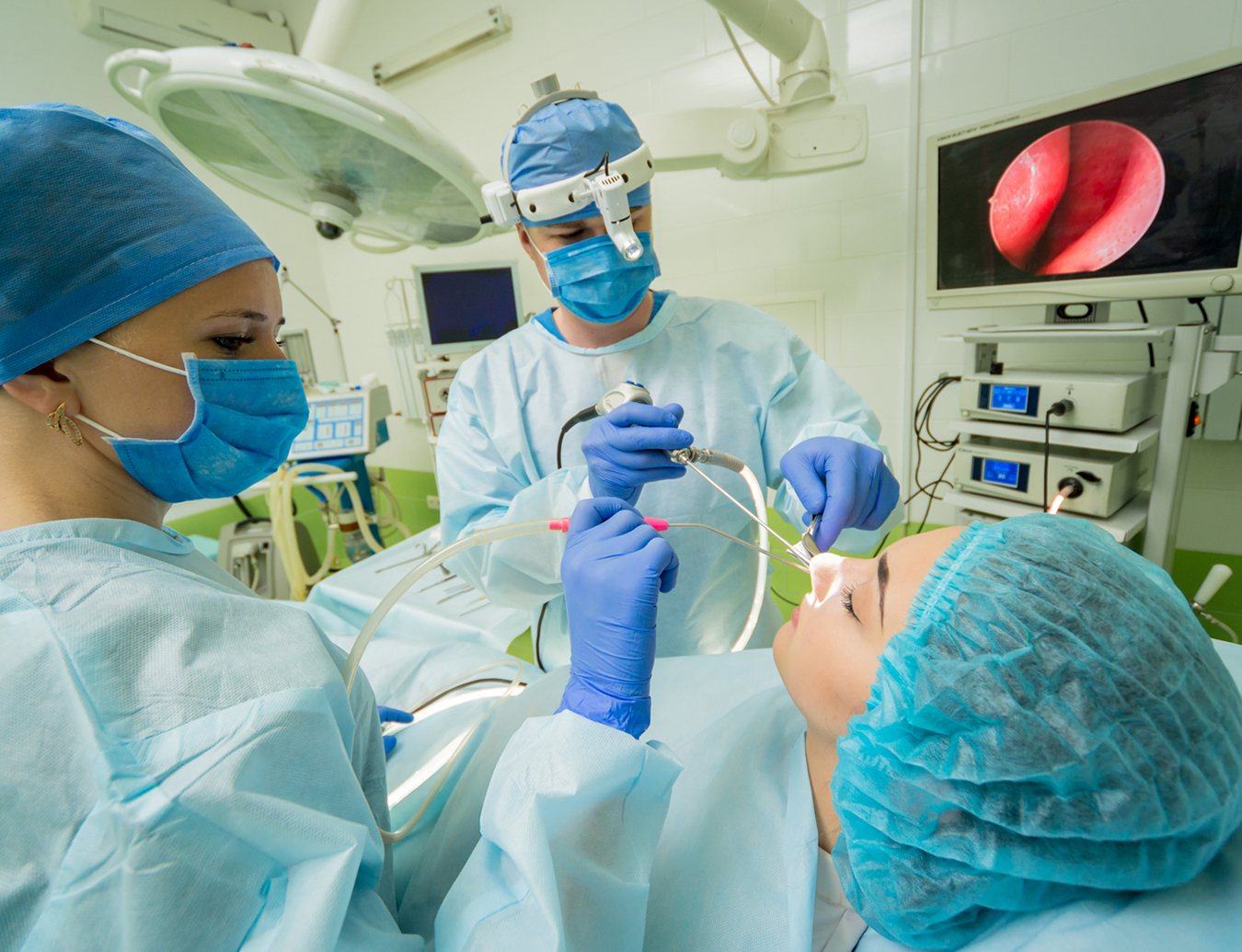 Normally, sinusitis is treated with medication. Unfortunately, there are cases in which the normal treatment has not been effective. In such situations, it might be necessary to perform a sinus surgery. In most of the sinus surgeries, the procedure was used in order to treat chronic sinusitis, as the symptoms were recurrent and persistent.

The sinus surgery represents a process of creating a larger room between the sinuses and the nasal channels. The sinusitis surgery actually consists in removing parts of the nasal structure that are obstructing the normal flow of drainage, such sinus tissue, bone or even polyps. After a sinus surgery, the air should get in more easily, while the drainage could get out normally.

Nowadays, there are three types of sinus surgery:

Sinusitis frontalis occurs when the sinuses that are situated behind the eyes and in the forehead get inflamed.

The causes of sinusitis frontalis could be any of the following:

Sinusitis with polyps represents an inflammation of the sinuses that usually lasts more than 12 weeks.

Polyps generally swell and get larger, occupying between 75% to even 90% of the nasal cavity and they become a major cause for chronic sinusitis.

The sinusitis caused by allergies could be both acute or chronic. Normally, the allergic sinusitis occurs within the childhood and is a reaction of exposure to allergens, such as pollen, dust, smoke or pelage.

The common symptoms of allergic sinusitis are:

Nobody is born with allergies but they can develop in time, depending on the surrounding environment. In order to improve the symptoms of the allergic sinusitis, it is very important to treat the sinusitis firstly.

Often, allergies and sinusitis can come together, as allergies are known to ignite the inflammation of the sinuses.

The main difference between sinusitis and allergies is that the allergies occur as a reaction of the immune system to allergens, such as dust, pollen or animal hair. Sinusitis is an inflammation of the sinuses, due to blockage or infection of the nasal channels.

Symptoms that help you identify sinusitis as they do not occur in any allergy:

The discomfort that you could feel during a sinusitis bout could be very annoying. Helpfully, there are some possibilities for you to drain the sinuses. When you are affected by sinusitis, you should:

If the Eustachian tube gets filled with mucus, you might feel dizzy, or even fell that you do not have equilibrium any more.

Pain is one of the main characteristics of sinusitis. The pain that sinusitis come with could be felt all over the face, depending on which of the sinuses is inflamed. When suffering from sinusitis, you could feel the pain mostly above and under the eyes, but also behind the nose.

Due to the inflammation and swelling, the signature pain of sinusitis comes along with a dull pressure in the forehead, on either side of the nose, in the upper jaws, between the eyes or even in the teeth.

You can avoid the bouts of acute and chronic sinusitis, by:

During pregnancy, it is important to avoid any health issues as possible. Also, it is very important to avoid the usage of various medicines, which could negatively affect the pregnancy depending on the toxicological profile of the drug and the trimester of pregnancy the woman is in.

As sinusitis can occur at any time, during pregnancy it could be a little bit more stressful and challenging to deal with. The key information is that most of over-the-counter medicines should be safe to consume. For example, the sinusitis headache symptoms could be relieved acetaminophen. Also, you can use some decongestants; antihistamines; expectorants or cough suppressants, but only at the recommendation of your doctor. Also, it is very important to note that aspirin and ibuprofen are not recommended during pregnancy.

Though any sinusitis bout could be very distressing and it could make you feel very uncomfortable, it is very important to know that treating it well, you might get rid of it sooner than you would expect it. If you suffer from a more complicated case of sinusitis, the ENT specialist will help you improve the symptoms. In worst case, you will need a surgical intervention. The good thing is that, normally, any sinus surgery doesn’t take longer than 2 hours, and there are no scars left after the procedure.

Anyway, if your symptoms last for more than 4 weeks, you should consult your doctor.