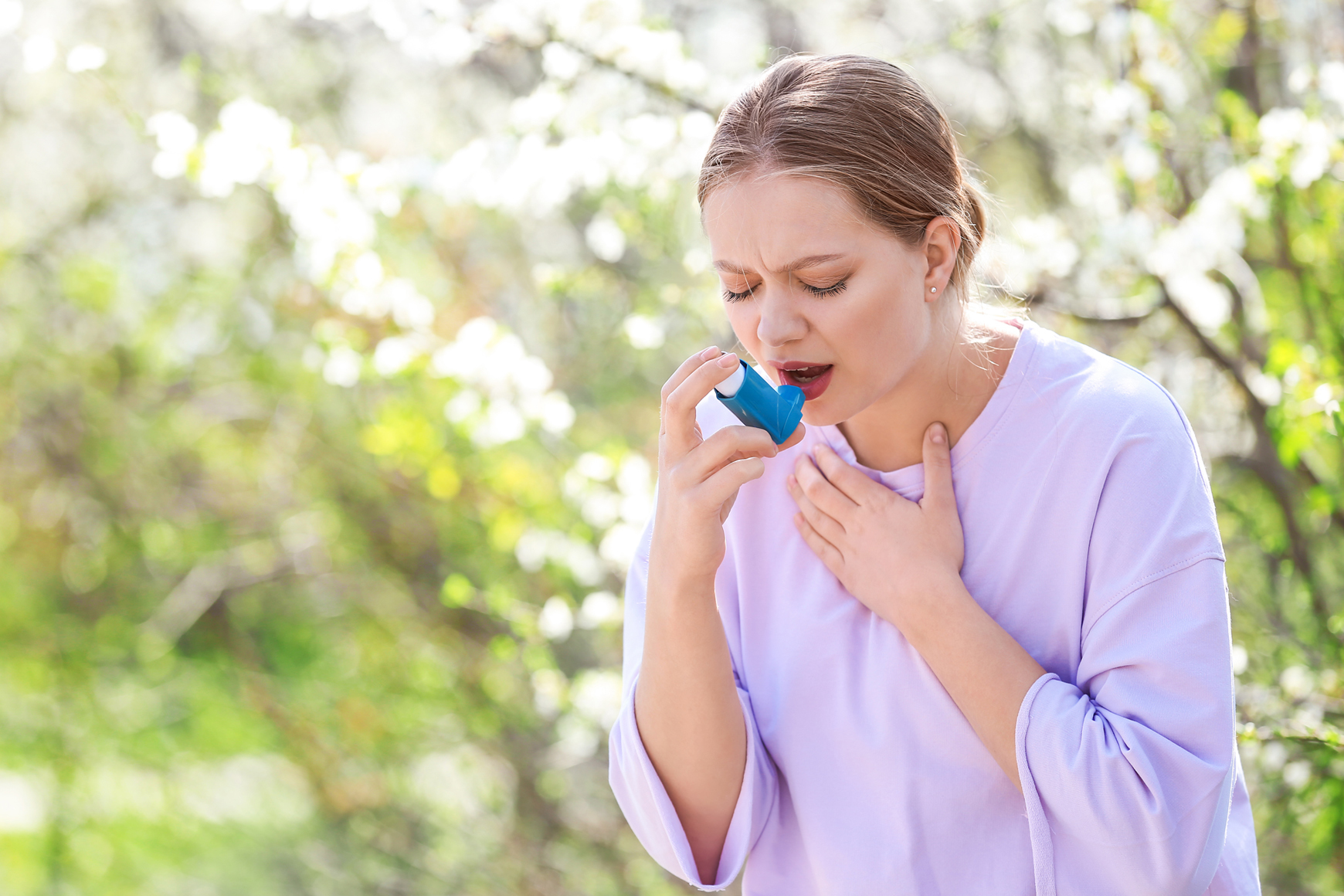 Asthma is a medical condition of the lungs and airways that makes breathing difficult, the most common symptoms being coughing, wheezing and shortness of breath. Even though it is a disease typically found in children, many adults suffer from it as well, with the severity of symptoms ranging from minor to life-threatening.

Asthma disease is a complex and diverse condition that can have multiple causes, which lead to different types of asthma. In this article we will tackle down all-things-asthma, from explaining the anatomy and physiology of breathing to describing the symptoms of asthma, what causes it, which doctor is best suited to diagnose it, how you can treat it, what are some ways to prevent it and more!

Anatomy and physiology of the respiratory system

Before we dive into the subject of asthma and what it means for the physiology and anatomy of the person who suffers from this condition, it is important to understand the way that the human respiratory system normally works.

In simple words, the respiratory system is responsible for getting oxygen into the bloodstream (inspiration) and getting carbon dioxide out of the body (expiration). This is achieved thanks to the airways, a pair of lungs and the muscles involved in the mechanics of breathing. However, the respiratory system also plays a few other important roles in our lives, such as: helping us talk and smell, helping regulate our body’s temperature according to the humidity of the environment we’re in and protecting our airways from different substances that might be damaging for our body.

In a more detailed overview, the human respiratory system has quite a few components, which are:

There are many medical conditions associated with the respiratory system, especially since it has such a complex array of components that are each and every one essential for the functionality of the entire system. Some of the most common conditions involve inflammation of some components which can be caused by allergies, asthma, infections or diseases such as cancer or COPD (chronic obstructive pulmonary disease).

By now, we’ve seen how the respiratory system normally functions, but one question prevails: what happens with these organs and how are they affected in case someone develops asthma?

What asthma really does to the respiratory system is that it causes inflammation, swelling and narrowing of the airways, sometimes accompanied by an excess of mucus. This process makes it difficult to breathe especially if the muscles that make up the airways constrict as well. Long term, asthma can cause damage to the airways, such as thickening of the walls of the airways or even the remodeling of the airways with permanent structural modifications. If by now you’re wondering what can be the cause of this serious and impairing condition, later on we’ll address this subject as well.

Asthma is a medical condition that can affect people at any age, but it usually develops in the early stages of life, some people growing out of it by the time they reach adulthood. There are some cases of asthma called adult-onset that develops later in life.

There isn’t a direct answer to this question, but research has shown that if your parents have this condition (especially your mother), there is a great chance you will also develop it. The explanation lies in the passage of genes that play a role in the way your immune system is formed.

There are some risk factors documented for asthma and they can be split into two categories: socio-demographic factors and environmental factors.

The socio-demographic factors include:

The environmental factors include:

Asthma is a condition that comes in different forms which means that the symptoms a person experiences depend on the type of asthma they have. However, these are the most common symptoms of this medical condition: wheezing (a sort of whistling sound that happens when the person breathes – asthma breathing), coughing, shortness of breath, a feeling of tightness in the chest, fatigue. When these symptoms aggravate for a period of time, this is called an asthma attack.

It is important to know that every person is different, everyone can have different symptoms at different intensity. Also, these symptoms can vary from one attack to another and the same person can have minor symptoms once, but severe the next time. Some patients with asthma can go a long time before experiencing an asthma attack and others can have a surge in symptoms during specific activities. While mild attacks are more common and easier to manage, severe attacks are serious and usually require medical assistance. 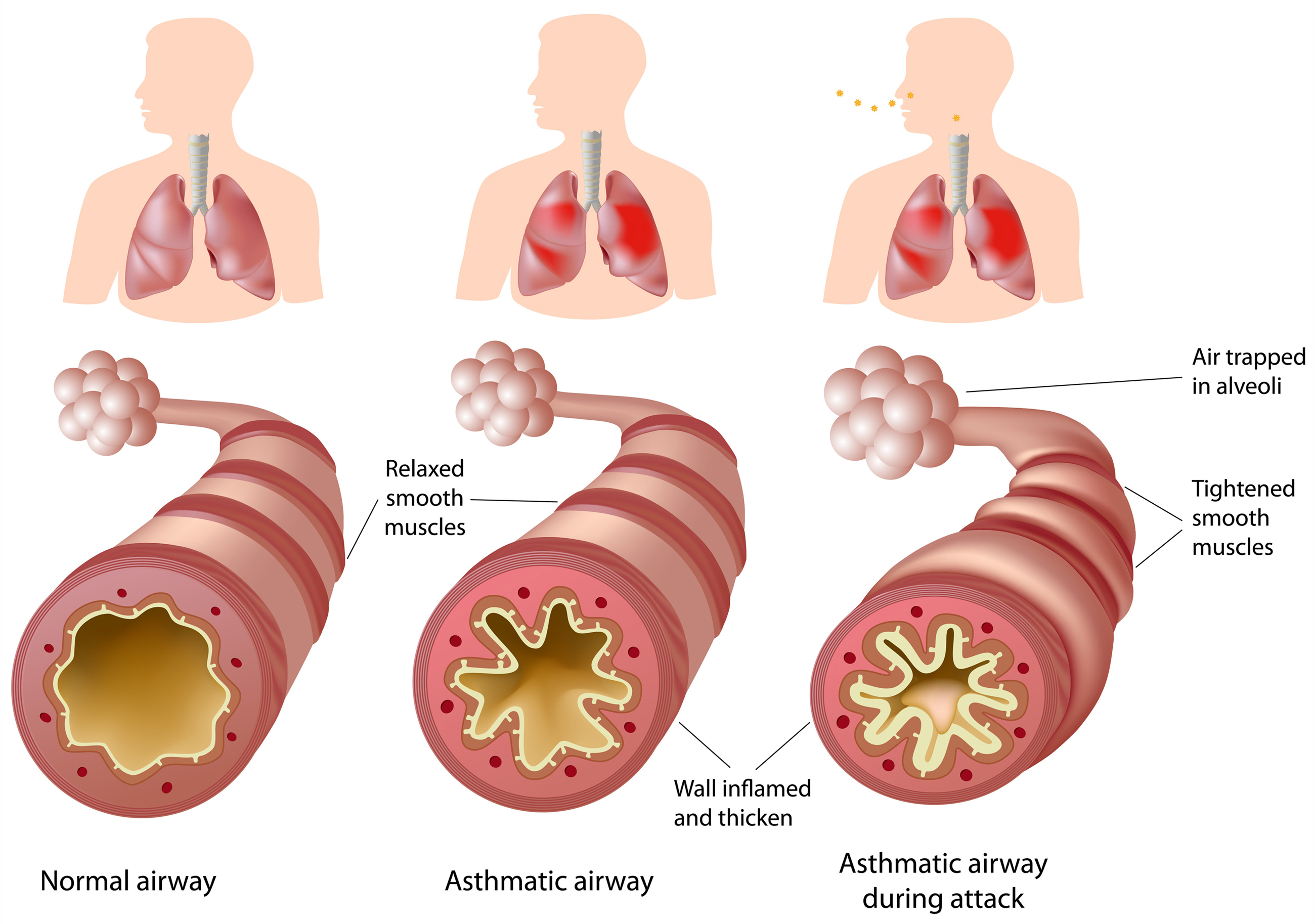 Given the fact that the symptoms of asthma are not permanent, when they flare-up and get worse, the terms used to describe this phenomenon are exacerbation (acute exacerbation of asthma), attack (asthma attack), episode or flare-up.

Asthma attack is the term used to describe the episode in which the symptoms of asthma worsen and is characterized by bronchospasm (tightening of the muscles that make up the airways), inflammation and an increased production of mucus. These physiological and mechanical conditions lead to the main symptoms of asthma (e.g. shortness of breath, wheezing, coughing). What is more specific to an asthma attack is that these symptoms are severe for a period of time and can be accompanied by chest pain, talking difficulties and anxiety. Things can escalate quickly and an asthma attack can easily become life-threatening if it’s not properly treated, sometimes requiring immediate medical assistance. The asthma exacerbation treatment is discussed later on, in the treatment section.

Why asthma worse at night?

Sometimes, the symptoms of asthma worsen during the nighttime which has lead the specialist to call this condition nocturnal asthma or nighttime asthma. This condition affects the quality of rest for the person who suffers from it, making it more difficult to manage the symptoms that occur during daytime as well.

While there isn’t a specific reason why asthma symptoms get worse at night, specialists in the field have found some potential causes, such as:

As we’ve seen before, so far there isn’t much light on the subject of why some people get asthma, but research has shown that there are some genetic and environmental risk factors that play an important role.

As far as what triggers the symptoms of asthma and an asthma attack, things can be very different from one person to another. Considering that usually asthma is an allergic response, some triggers can be pollen, dust, mold or pets. However, asthma can also be triggered by an infection of the respiratory system, by intense physical activity, smoke or other pollutants in the air, some medications (such as aspirin or ibuprofen), stress or gastroesophageal reflux disease.

Considering the many types of triggers and causes that can lead to asthma, this condition can be classified as follows:

Bronchitis is a medical condition of the bronchial tubes which are the two ramifications of the trachea into the lungs. When these tubes start to get inflamed, the condition is known as bronchitis.

You can have bronchitis without having asthma, however, if you have asthma, the chances of getting bronchitis as well are higher. The term of asthmatic bronchitis (asthma bronchitis) is used to describe the bronchitis you get as a direct result of asthma. Even though we see that there is a link between the two medical conditions, they are different in what’s causing them. Bronchitis, as the name also suggests, is a result of an infection, whereas asthma is more or less an allergic reaction.

However, the two conditions can get easily confused because their symptoms are almost the same: wheezing, shortness of breath, tightening in the chest. A medical specialist and specific testing can determine which one you suffer from.

Chronic Obstructive Pulmonary Disease is the term used to describe a group of medical conditions that affect breathing and obstruct the airflow, such as severe asthma, chronic bronchitis and emphysema (damage to the walls of the alveoli in the lungs). While people with either asthma or COPD don’t usually develop the other condition (asthma to COPD is not a bidirectional relation), it is possible for the two to co-occur, in which case the term used is Asthma-COPD Overlap Syndrome.

The symptoms of this condition are similar to those of asthma, and while it’s not serious all the time, it can quickly become life-threatening. Because of the similarities in symptomatology, usually people with asthma don’t get a diagnosis for COPD when there is the case which is unfortunate since both of these conditions should get appropriate treatment.

One of the triggers of asthma can also be emotional stress. Experiencing stress can also lead to anxiety if the person doesn’t know how to manage stressful situations which in some cases can trigger panic attacks. Panic attacks are episodes of severe anxiety that happen all of a sudden. While sometimes it’s hard to make a difference between an asthma attack and a panic attack because both of them cause breathing difficulties and chest tightness, there are some characteristics that make it easier to diagnose which is which. For example, panic attack also comes with hyperventilation, nausea, sweating, dizziness, increased heart rate and a fear of dying which are not symptoms that will occur in an asthma attack.

Asthma is diagnosed by a doctor following an assessment of the patient’s medical history, a physical exam and, sometimes, some additional tests. Some of the specific asthma test or asthma control test include:

Typically, the nursing plan for asthma is built around preventing the allergic reaction, managing the allergens, maintaining stable airflow and airways and preventing further complications of the respiratory system.

You might be wondering by now “for asthma, which doctor is recommended?”. Well, the two most qualified specialists that can help diagnose and treat asthma are a pulmonologist (or lung doctor) or a specialist in allergy and immunology (asthma and allergy specialists). If you don’t know anyone with this professional experience or you don’t have access to a GP that can refer you to one, you can always just google “asthma doctor near me” / “asthma specialist near me” and choose someone to make an appointment. 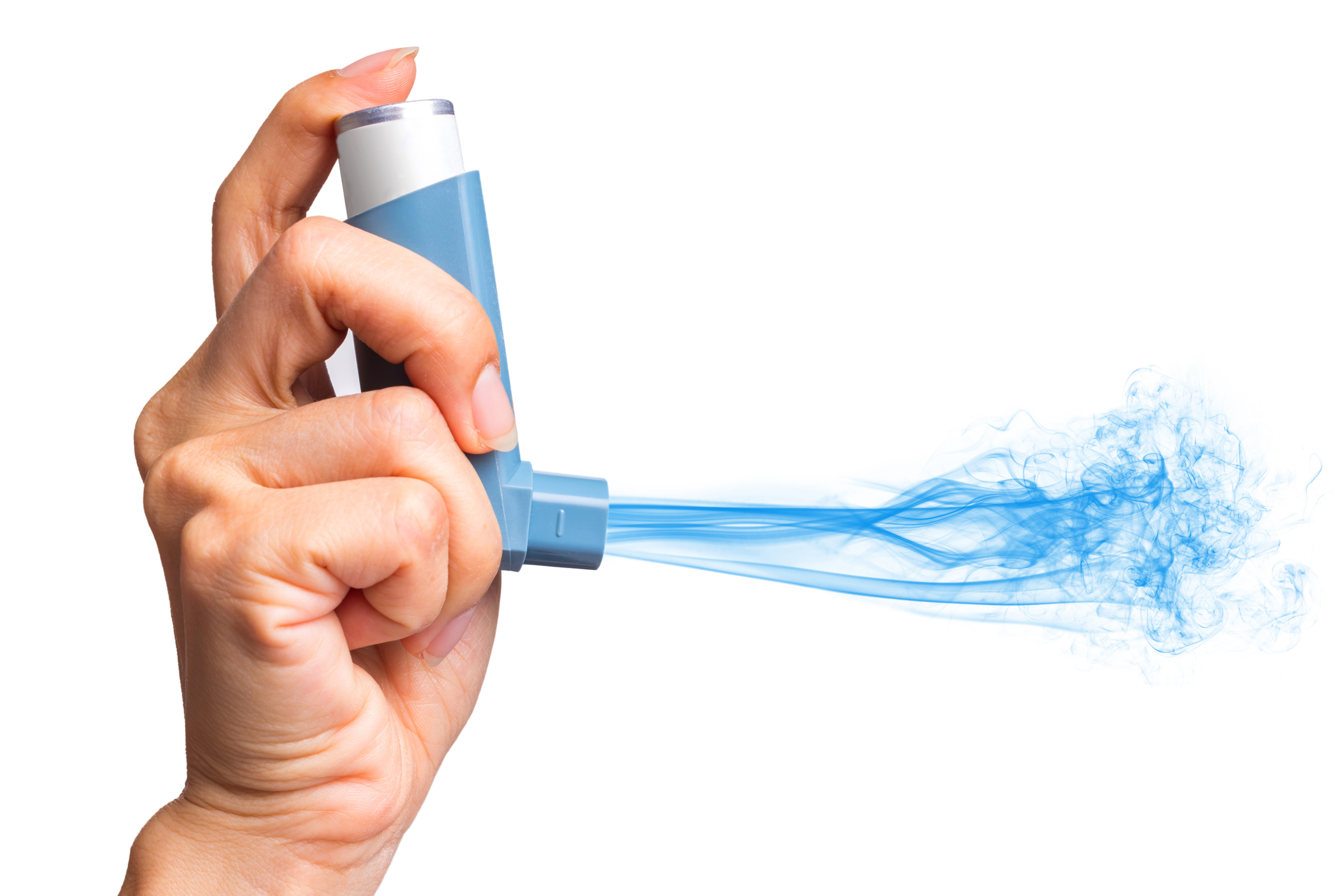 While there is no cure for asthma, there are some general guidelines for treating asthma, making its symptoms easier to manage. These recommendations usually include inhalers, tablets or other therapies that can keep asthma under control. When you get the diagnosis of asthma, the doctor will create a personalized plan for you depending on your specific symptoms and their severity, but keep in mind that this plan might suffer alterations in time due to the way your symptoms evolve and your body responds to treatment.

There are three types of inhalers, one that helps relieve the symptoms (asthma rescue inhaler or reliever inhaler), one that prevents symptoms from progressing (preventer inhaler) and the third one which is a combination of both.

Another treatment form that is very important especially for children with asthma is asthma oxygen therapy. Hypoxia, the condition in which there isn’t enough oxygen reaching the bloodstream and tissues, is the main cause of death in kids with asthma. Therefore, oxygen therapy is essential and very useful in managing asthma symptoms.

Something people with asthma can do to alleviate their symptoms is to use a humidifier in their rooms that can keep the humidity level constant and can also filter allergens and other substances in the air that might trigger an attack.

Is asthma a disability?

It’s clear by now that asthma is a serious medical condition that can critically impair someone’s quality of life and ability to work and function properly. As such, asthma is classified as a disability, as well as allergies.

Asthma is a lung condition that manifests through breathing problems that can range from mild to severe, even life-threatening. While there isn’t a specific thing that causes asthma or a cure for it, there are some ways to adapt your environment and lifestyle in a way that prevents asthma flare-ups, alongside following the treatment plan approved by a medical professional.