Before we dive into the subject of atopic dermatitis in particular, let’s have a look over what dermatitis is and the multiple ways it can be classified in.

Dermatitis is a medical term used to describe a group of conditions that affect the skin, making it dry, red and itchy. Dermatitis is usually caused by allergies, infections, different substances or even genetics and its symptoms can go from mild to severe. Further, we’ll discuss some of the (many) types of dermatitis that can affect your skin, other than atopic dermatitis which will be discussed in detail later on.

Seborrheic dermatitis. This is a type of dermatitis that in addition to making the skin red and itchy, it also causes the formation of some flaky scales. It is also known as dandruff or cradle cap and it can look similar to psoriasis or atopic dermatitis. It’s most common in babies, but it can also appear during puberty or adulthood. The body parts that are typically affected are the scalp, eyebrows, nose and behind the ears, but it can also appear anywhere there is hair or skin folds.

Diaper dermatitis. Diaper dermatitis is a very common rash in babies or toddlers that in most cases is caused by the baby’s skin contact with different substances (which makes it a type of contact dermatitis) in the diaper area. However, some other causes can be yeast infection (candida), seborrhea, bacteria or allergies. Because of the location of the area affected, urine and feces contribute to the rash so a proper hygiene routine is essential in managing this condition.

Nummular dermatitis. Or discoid eczema, is a type of dermatitis that manifests through coin-shaped spots on the skin that are itchy, red, might have liquid or crust and give a burning sensation. You can get it at any age, this type of eczema being triggered by dry or sensitive skin, lesions of the skin, insect bites, burns or other types of dermatitis (e.g. contact dermatitis).

Dyshidrotic dermatitis. It’s also called foot and hand dermatitis or palmoplantar dermatitis because it only appears on the hands and feet. Characteristic for this type of dermatitis are the blisters that can be extremely painful or itchy, flaring up in the palm of the hands, soles or between the fingers and toes. Nickel, stress, seasonal allergies or sweaty palms are the most common triggers for this type of eczema.

Stasis dermatitis. Stasis dermatitis is also known as gravitational dermatitis or venous dermatitis and is caused by poor circulation or venous insufficiency in the lower limbs. Because of this, this type of dermatitis usually affects people over fifty, with women being more at risk to get it. The most common symptoms include ankle swelling, spots of discoloration on the skin, itchiness, dryness and a heavy feeling in the legs after standing or sitting up for too long.

Periorificial dermatitis. As the name suggests, this type of dermatitis is characterized by multiple small, itchy, red papules that cluster together around different orifices of the body, such as the eyes, mouth, nose, rarely genitals. While the specific cause of this dermatitis is not known, some triggers can be steroids applied topical, inhalers, cosmetics, toothpaste or poor hygiene of the skin.

Now that we’ve covered the most common types of dermatitis, let’s move onto the subject of atopic dermatitis, the most prevalent of them all.

Atopic dermatitis is a chronic condition that appears and disappears over periods of time and is characterized by red, itchy rashes on the skin. The term “atopy” refers to an allergic predisposition of the skin that can be associated with other medical conditions such as asthma or allergic rhinitis.

Atopic dermatitis has a set of symptoms and signs that make it fairly easy to recognize, but these can vary from one person to another and even in the same person, from one flare up to another. Because it’s a chronic condition, atopic dermatitis can manifest periodically or between long periods of time. It usually appears at small ages, before the age of five, and can go well into puberty and adulthood.

The most common symptoms and signs are:

What’s characteristic for this condition is that it has two stages: exacerbations (flares) and remissions. The exacerbations are the periods of time when the symptoms get worse and really intense and the remissions are the times when the affected skin areas clear up and don’t cause any more discomfort (until the next flare).

There are some factors that can trigger the symptoms for people who have atopic dermatitis such a low humidity and temperature levels which is not beneficial for the dry skin, allergies (especially seasonal allergies such as hay fever) or use of different skin care or cosmetic products that contain substances that the skin doesn’t respond well to. 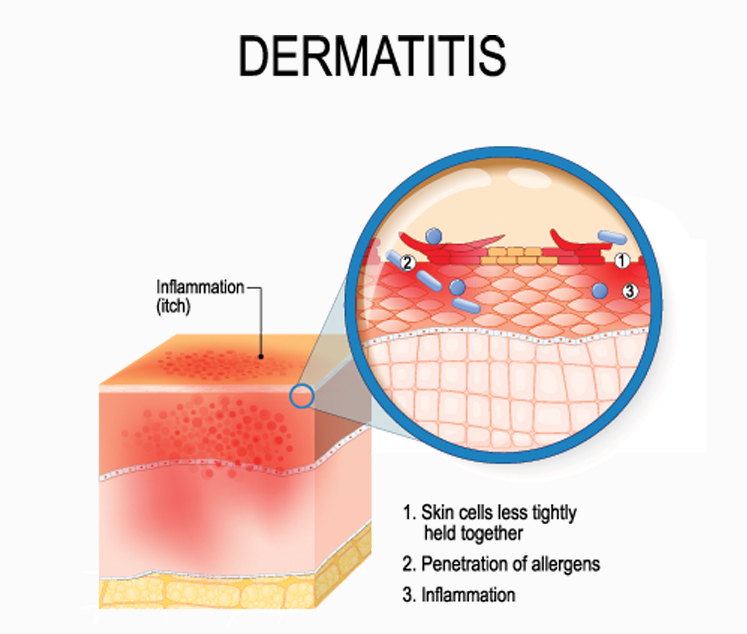 As far as what causes it, professionals have yet to solve the mystery. However, research has provided some insight into the fact that people with atopic dermatitis have a specific mutation of a gene that is responsible for the production of filaggrin, a protein involved in creating a good protective barrier for the skin. If the body doesn’t have much protein to maintain this barrier, it leaves the skin vulnerable to bacteria, viruses or other agents that can compromise the integrity of the skin and lead to inflammation and/or infection.

Plus, as we’ve highlighted before, it appears that people who suffer from this chronic, long-lasting condition also exhibit an erratic immune system that contributes to the low-functioning or ineffective protective barrier of the skin.

Who is more likely to get atopic dermatitis? Atopic dermatitis is a very common condition, affecting females and males equally. It usually starts in the first six months of life, but it can also develop later into childhood. It typically flares up periodically during the first years of life; for some people it can go away by the time they reach adolescent years, while for others it never really goes away, suffering from this condition well into adulthood. It’s very rare for someone to get atopic dermatitis for the first time later in life, but if it happens, it’s usually caused by exposure of the skin to damaging factors.

The most important risk factor for getting atopic dermatitis appears to be genetics, meaning that if you have a family history of any type of dermatitis (eczema), you are more likely to get it as well. What’s more, atopic dermatitis doesn’t always come alone and some people experience it because of two other medical conditions – asthma or allergic rhinitis (hay fever).

Given that people with atopic dermatitis have an unstable immune system, this means that sometimes it can become weak, leaving the person vulnerable to other medical conditions, such as fungal foot disease or infection with staph or bacteria.

Some other complications of this chronic medical condition can be asthma and/or hay fever, with more than half of children with atopic dermatitis developing asthma or hay fever; chronic itchy skin; skin infections – lesions of the skin caused by intense scratching can leave the skin open and vulnerable to bacteria and viruses; sleep difficulties because of the itch-scratch cycle that can disrupt the sleeping patterns. Plus, people with atopic dermatitis can also develop other types of dermatitis, such as neurodermatitis, irritant hand dermatitis or allergic contact dermatitis.

Where on your body can you get atopic dermatitis?

Atopic dermatitis can flare up almost anywhere on your body, but there are some more commonly affected areas among people. These are:

Atopic dermatitis on breast. Another area on the body where atopic dermatitis is quite common is the breasts. Itchy breasts or nipples are typically caused by atopic dermatitis. There are some specific factors that can aggravate the symptoms, such as dry skin, artificial fibers and fabrics, perfumes or cosmetic products. However, there are also other potential causes for itchiness in the breast area, such as pregnancy (the breasts enlarge causing the skin to stretch), mastitis (infection of the breast tissue) or even breast cancer.

What does your skin look like if you have atopic dermatitis?

Atopic dermatitis causes some particular skin features that make it easier to diagnose it and differentiate between atopic and other types of eczema. These characteristic skin features include: 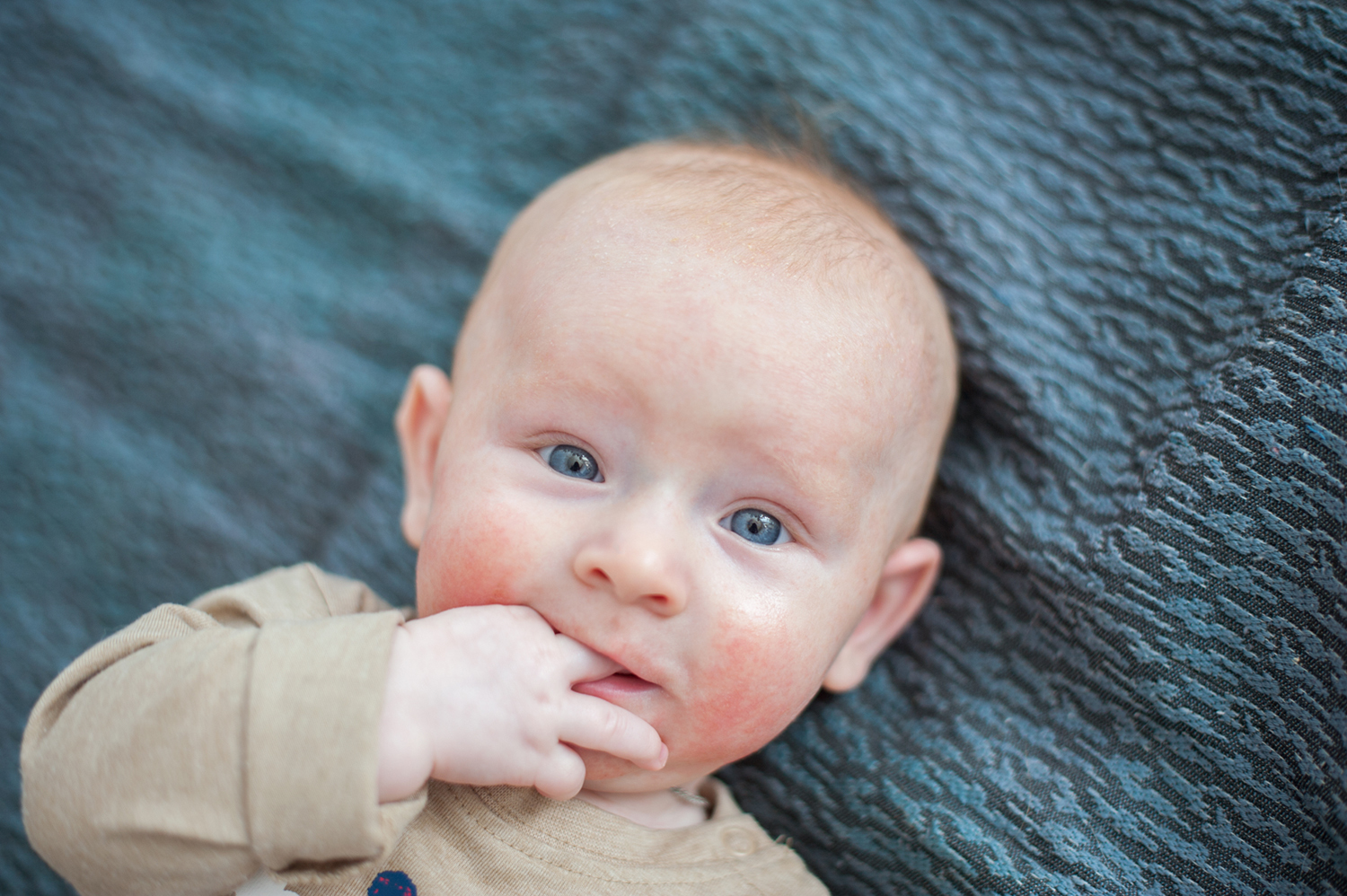 We’ve seen so far that the most at risk for developing atopic dermatitis are babies and children, this condition typically debuting in the first six months of life. While the exact cause for this chronic, long-term medical condition is unknown, a combination of genetics and environmental factors might be the answer. However, not all babies are at risk for developing atopic dermatitis, the most common risk factor being a family history of dermatitis and allergies. In children, the most affected areas of skin are the scalp, face, elbows and knees, as well as the skin around the mouth or in the diaper area.

How is atopic dermatitis diagnosed?

Being a skin condition that is also most commonly prevalent in children, the healthcare professionals that can help diagnose and treat atopic dermatitis are pediatricians, dermatologists and allergists. The diagnosis can be made following a physical exam and visual inspection of the area of skin affected. Plus, family and patient health history can help in making the diagnosis. There isn’t a miracle test that can diagnose atopic dermatitis, but blood tests and skin tests may be recommended by doctors to assess the levels of immunoglobulin and whether there are some allergies present that could interfere with the skin condition. To sum it up, if you or your child go to a healthcare professional looking for a diagnosis of atopic dermatitis, there are a few steps they might take:

How to treat atopic dermatitis?

Unfortunately, there is no known cure for atopic dermatitis. However, skin specialists have narrowed down a few pharmacological and non-pharmacological remedies that can help manage the symptoms and even reduce the intensity and time-frame of a flare-up. The treatment for atopic dermatitis depends very much on the severity of the symptoms, and considering how bad they are, your doctor might recommend medication. In most cases, though, a good skin care regimen and adequate lifestyle choices can be enough to tame down an exacerbation of atopic dermatitis.

Atopic dermatitis how to treat:

We’ve seen that the exact cause of atopic dermatitis is not known so there are no ways to prevent it from developing. However, there are some actions you can take in order to prevent the flare-ups from reappearing, such as: moisturizing religiously, identifying and avoiding potential triggers, taking shorter baths and using soaps and creams designed for sensitive skin.

Atopic dermatitis is a chronic skin condition that is very common nowadays. While we don’t know yet what exactly is the cause of this eczema, genetics and environment seem to play the main roles in the development of atopic dermatitis in the early stages of life. The symptoms of this condition can have a huge impact on a person’s life, ranging from sleep disturbances caused by extreme itchiness to body image issues if it occurs later in life. Even though this is a long-lasting condition that can have periods of remission, there are a number of treatment and preventative solutions that can help ease the symptoms, reducing the impact this condition has on one’s quality of life.