B12 - the essential nutrient you need!

What is Vitamin B12? 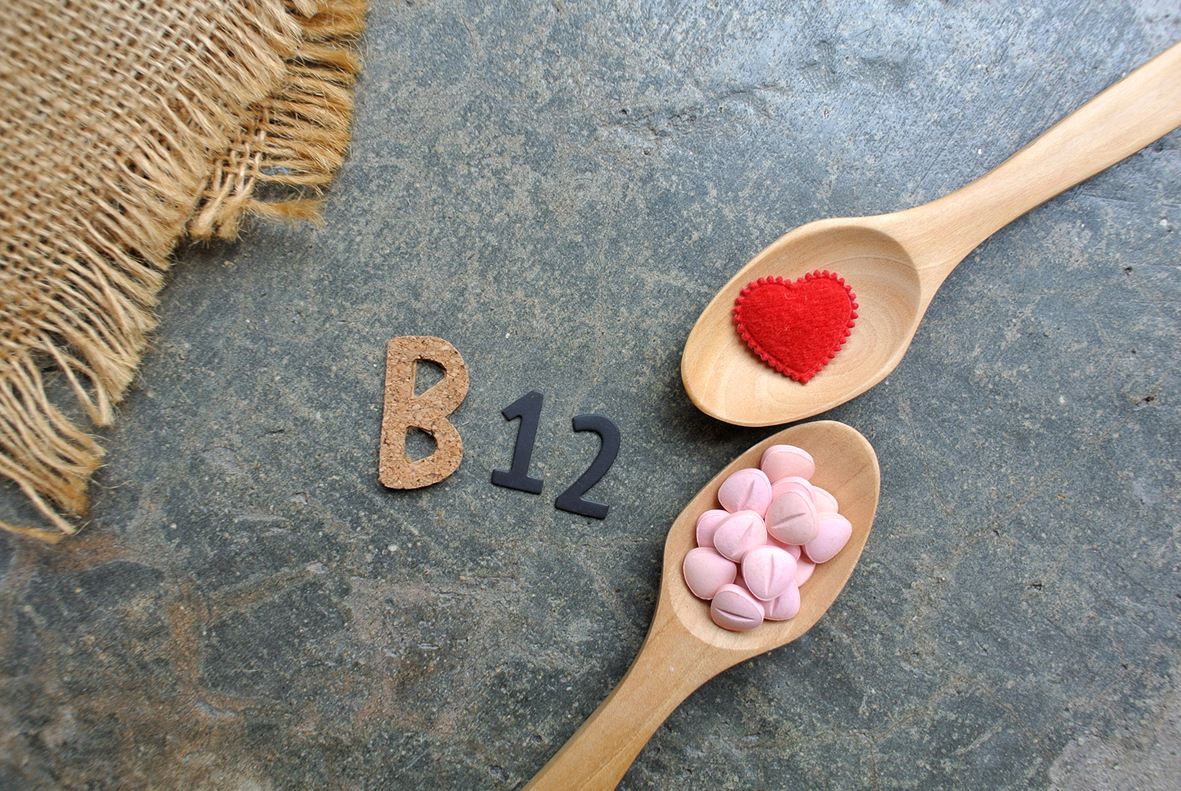 Vitamin B12 is also known as cobalamin and it is a water-soluble nutrient that the human body requires for distinct processes such as red blood cell formation, cell metabolism, nerve function, and DNA and RNA synthesis, which are essential for transmitting genetic information. In addition to that, Vitamin B12 plays an important role in transforming food (mainly carbohydrates) into energy (glucose). Its Current Procedural Technology (CPT) code is 82607.

Cobalamin’s chemical formula is C63H88CoN14O14P and it is one of eight B vitamins (B complex), among B1 (thiamine), B2 (riboflavin), B3 (niacin), B5 (pantothenic acid), B6, B7 (biotin), and folic acid. All B vitamins are necessary for healthy skin, hair, eyes, and liver, as well as a well-functioning central nervous system.

As mentioned, B12 is an essential nutrient for a well-functioning human body. Generally known as Vitamin B12 or cobalamin, there are four types of the nutrient, called Methylcobalamin, Cyanocobalamin, Adenosylcobalamin and Hydroxocobalamin.

Sources of Vitamin B12

Most people obtain the appropriate amount of Vitamin B12 without needing any type of supplements, only based on their diet. However, the nutrient can be found either in certain ailments, special foods fortified with it, or supplements. 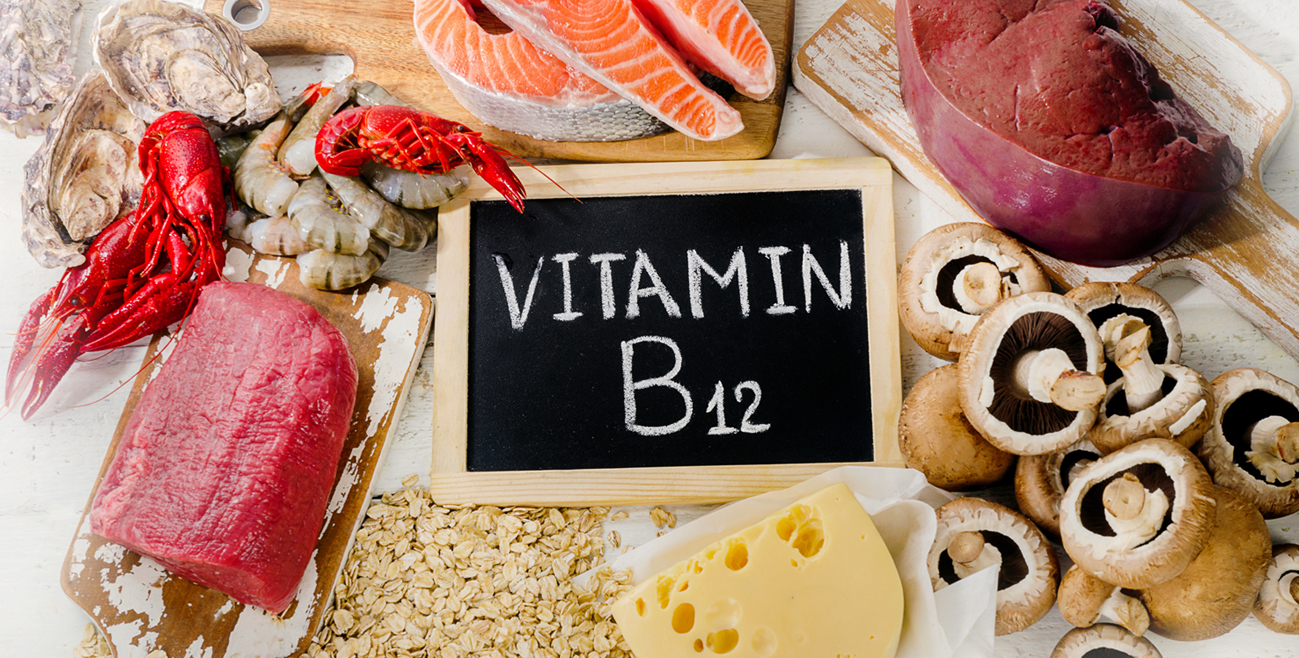 It is naturally found in foods of animal origin such as fish (salmon, tuna, sardines, trout), oysters and clams, meat, poultry, eggs, milk, cheese, yogurt, and other dairy products. While vegetarians can still opt for most dairy products and eggs, this represents a great obstacle for people that follow dietary restrictions such as vegans, individuals with gastrointestinal disorders, or people that had gastrointestinal surgeries, as their options are very limited regarding the Vitamin B12 sources.

Even though the main sources of the vitamin are animal origin products, most vegetables contain a small amount of Vitamin B12. Spinach, beetroot, potatoes, mushrooms, and alfalfa tend to have a higher level of this nutrient and therefore, they are great options for people with dietary restrictions. Typically, fruits don’t contain Vitamin B12. However, there are a few that can be considered sources of this nutrient, even though they contain very small amounts – bananas, apples, and berries.

Since there are many individuals facing this dietary obstacle, foods that are fortified with Vitamin B12 are available on the market. Some of these are plant-based milk (soy milk, almond milk, oat milk, cashew milk, or coconut milk) and dairy-free yogurt, breakfast cereals, tofu, nutritional yeast, or different types of spreads. Foods fortified with Vitamin B12 are vegan-friendly, containing a synthetic type of the nutrient, meaning it is man-made. 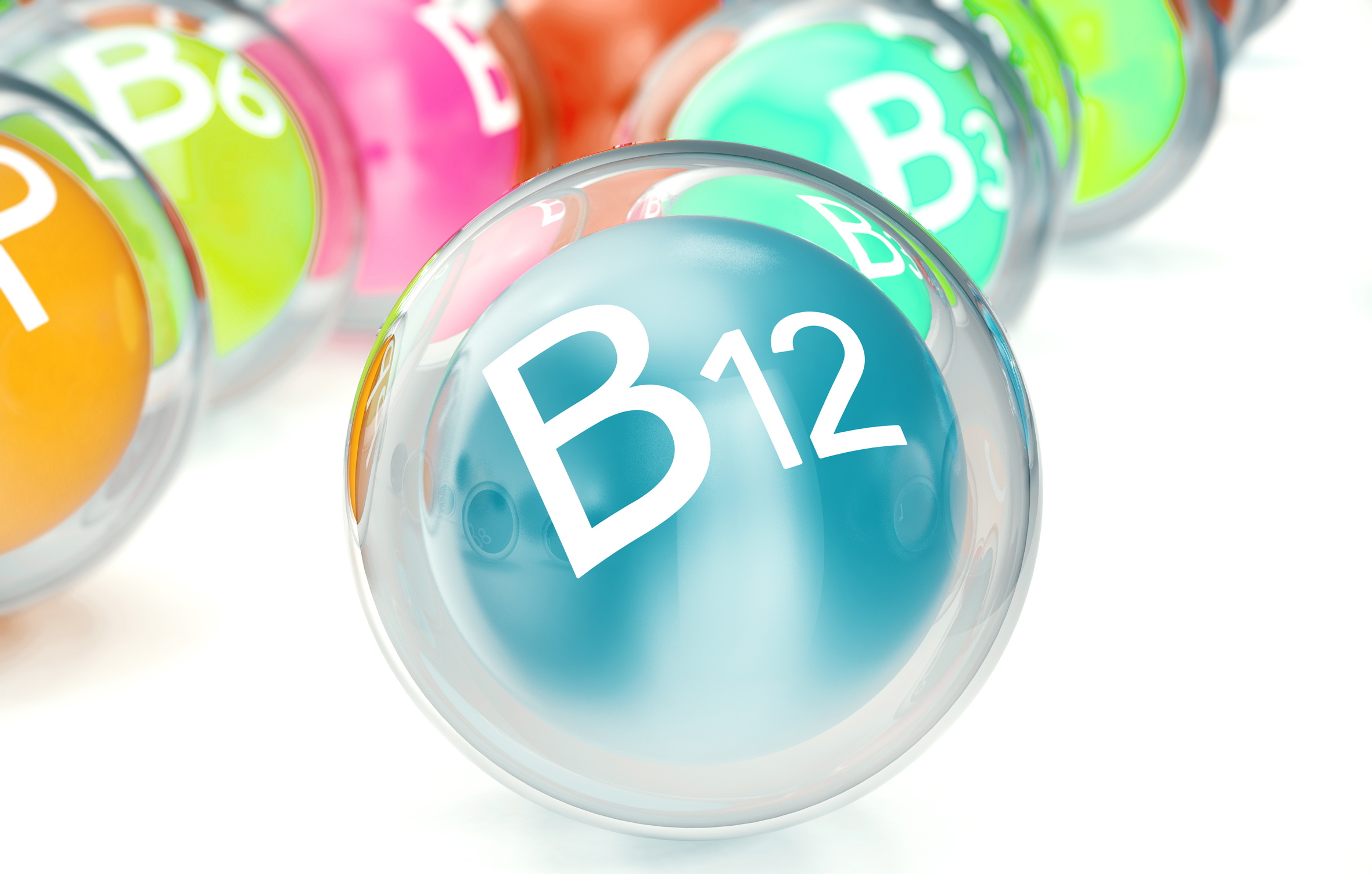 When the needs of the human body are not fully met using only a balanced diet that includes Vitamin B12 rich foods, individuals can opt for different types of dietary supplements found in multiple forms that they can swallow, chew and drink. These can be chewable tablets, capsules, gummies, or syrups. In addition to that, another option is represented by supplements that dissolve rapidly when placed under the tongue, known as sublingual formulations. For optimal results, dietary supplements should be taken regularly.

Even though gummies seem appealing to most people, their formula contains sugar which can severely affect one’s health if taken in big quantities and they may not be as efficient as the pill form of the dietary supplement. However, they represent a very good option for children, tasting similar to regular candy.

When it comes to the liquid form, it is designed to be taken by mouth, with or without food. The dosing quantity should be carefully respected, using a special measuring tool.

Vitamin B12 dietary supplements are completely safe for vegans, as they are artificial, the same as fortified foods. These are mostly recommended for those at risk of Vitamin B12 deficiency. As mentioned before, these include seniors, vegetarians, and vegans, people who had gastrointestinal surgeries or suffer from gastrointestinal disorders, as well as pregnant women and breastfeeding mothers.  Specifically for these categories and other people that suspect having a Vitamin B12 deficiency, it is best for a healthcare professional to develop the treatment plan and prescribe a suitable type of supplement, including recommendations for dosage and frequency of administration.

Benefits of Vitamin B12

There are multiple types of benefits for this particular nutrient. Generally speaking, its role is to help maintain a well-functioning human body, as follows: 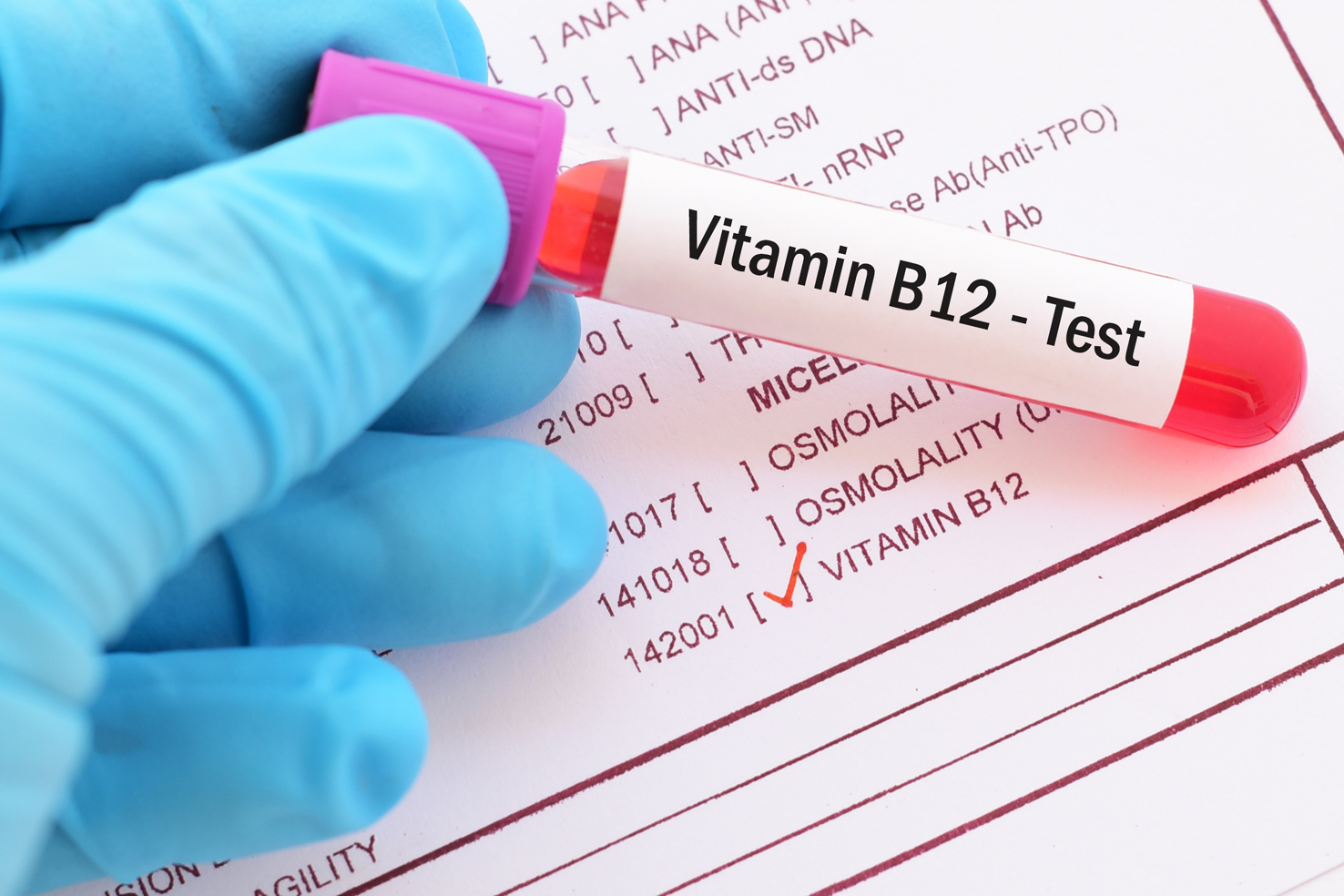 A simple blood sample is sufficient for checking if the concentration of Vitamin B12 in human blood is in the usual range of 160 to 950 picograms per milliliter (pg/mL) or 118 to 701 picomoles per liter (pmol/L). Considering this, values less than 160 pg/mL or 118 pmol/L are viewed as abnormal and potential signs of Vitamin B12 deficiency. Increased levels of Vitamin B12 are very uncommon because it is completely hydro-soluble, which means the body does not retain the excess and it is fully removed with urine. Typically, individuals do not experience Vitamin B12 overdose.  However, liver diseases (such as cirrhosis or hepatitis) and myeloproliferative disorders (polycythemia vera, chronic myelogenous leukemia) can lead to higher levels of B12.

When the values seem normal but there are symptoms of deficiency detected, professionals have the option of running a methylmalonic acid (MMA) test as an early indicator of the deficiency.

Causes of a vitamin B12 or folate deficiency

The causes of vitamin B12 deficiency can be various, including:

Symptoms of Vitamin B12 Deficiency

As the level of Vitamin B12 is insufficient for maintaining a normal activity of the human body functions, symptoms of deficiency can intensify slowly over time or appear quickly. The main symptoms observed in cases of cobalamin deficiency are:

Treatment for Vitamin B12 Deficiency 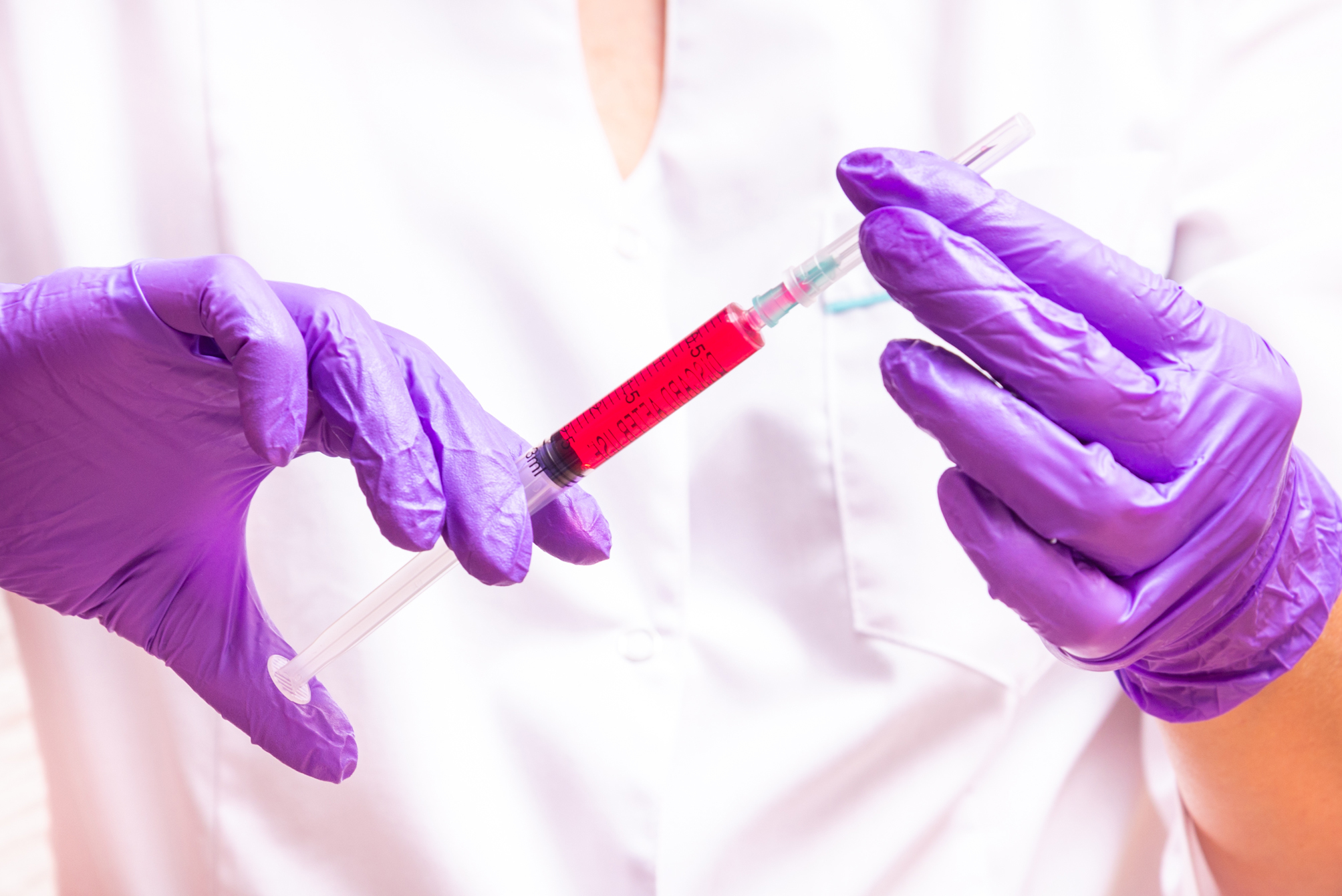 If Vitamin B12 deficiency is discovered after the testing process, there is required a treatment involving a boost of this certain nutrient in order to balance its concentration and keep a normal activity of the human body. A healthcare professional will recommend a suitable type of treatment for every person, as the causes and symptoms of the deficiency can vary.

Depending on the cause of the deficiency, this step is followed either by a regular dose of B12 tablets taken between meals or injections. Another recommended step is improving the everyday diet in order to achieve the necessary amount of this nutrient from foods. The aliments containing Vitamin B12 are mentioned above.

A different way that a professional can approach in order to treat Vitamin B12 deficiency is to detect a different health condition that may have caused the deficiency, develop the most appropriate treatment for that one and focus on their connection. There is usually an evolution regarding the Vitamin B12 levels during the treatment for the condition that caused the deficiency in the first place.

Complications of Vitamin B12 deficiency anemia

Typically, Vitamin B12 deficiency sticks to the symptoms mentioned above, but in very severe cases it can lead to a set of complications, especially if the deficiency is not treated properly for a very long amount of time. Some of the potential complications are issues regarding the nervous system, temporary infertility, pregnancy, and birth complications, different types of heart conditions, even heart failure in very extreme cases of anemia.

Most complications listed above can simply fade over time if treated correctly, but the nervous system may be permanently affected.

Similar to Vitamin C, medications such as aminosalicylic acid (that treats digestive issues), colchicine (an anti-inflammatory drug that treats gout attacks), metformin (used in diabetes), and any type of stomach acid-reducing drugs may also reduce the body’s ability of absorption of the Vitamin B12.  This is why it is strongly recommended to consult a healthcare professional before starting to use supplements of any kind and be careful to mention all types of medications consumed at the time.

Vitamin B12 for different age groups

The amount of the nutrient that the body requires depends on multiple factors such as age, regular diet, and other medical conditions, including the certain medications that come with them. Age is a very important aspect that influents the recommended dosage of Vitamin B12 that the body needs.

Vitamin B12 is 100% safe for children and parents are strongly advised to introduce it in their daily regular diet and even in a supplement form, as it is essential for healthy bones, blood, eyes, and hair, as well as a generally well-functioning body. Parents should be able to observe symptoms in their children’s behavior and health condition, such as fatigue, decreased appetite, irritability, or even developmental delays as they are growing up. In case some of these main symptoms are sensed, the next recommended step is to get the children tested for Vitamin B12 levels.

Usually, infants younger than six months need an amount of 0.4 mcg (micrograms) of Vitamin B12 per day, while infants aged from seven to twelve months require 0.5 mcg. As they grow, their bodies feel the need for more nutrients, which is why toddlers aged one to three years old require 0.9 mcg per day, and kids from four years old to eight years old already need 1.2 mcg. The average recommended dosage of Vitamin B12 for children aged nine to thirteen years is 1.8 mcg per day.

The recommended dosage of Vitamin B12 for teenagers (fourteen to eighteen years old) and grown adults is 2.4 micrograms per day.

Pregnant women should be extremely careful to offer themselves and the baby a sufficient level of Vitamin B12, in order to avoid developmental delays, especially when the mothers have strict dietary restrictions.  In cases of pregnancy, the body requires 2.6 mcg and while breastfeeding, the right quantity is 2.8 mcg per day.

Often testing their nutrient levels is strongly suggested, as well as seeking a specialist’s advice when it comes to cases of deficiency. The treatment plans, as previously mentioned, may include oral supplements or even shots of Vitamin B12, depending on the severity of the insufficiency.  Healthcare professionals usually recommend a dosage of 2.5 mcg per day or more, since the remaining excess amount easily passes through urine without staying inside the body for a long time.

Conclusion – What is important to remember?

Vitamin B12 is, without doubt, an essential nutrient that helps the human body function healthily as its main role is red blood cell formation. It is naturally found in animal-origin aliments, but people that follow dietary restrictions can opt for foods fortified with an artificial type of Vitamin B12 or supplements of various kinds. In case of observing deficiency symptoms (fatigue, pale skin, mouth and tongue inflammation, etc), it is important to see a healthcare professional, test the B12 levels and if it applies, follow the suitable treatment as prescribed as not treating a Vitamin B12 deficiency can lead to multiple health conditions.