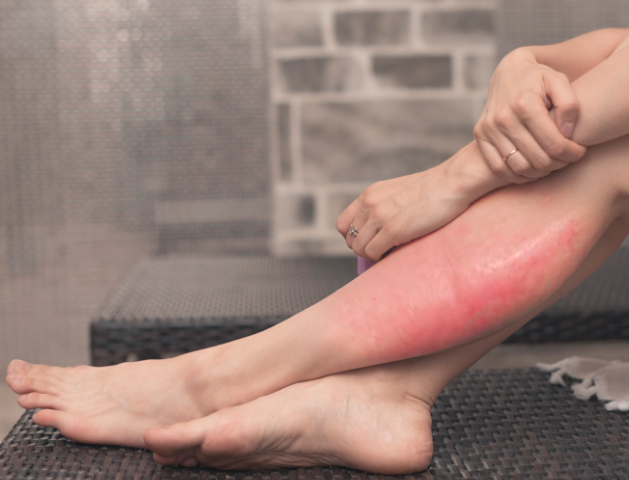 Cellulitis is an acute infectious process of the skin, affecting the dermis and the subcutaneous tissue. Although it can be quite common and generally straightforward to treat, cellulitis can also lead to serious complications, if left untreated.

As an overview, cellulitis is a bacterial infection of the skin, occurring when a lesion in the skin allows bacteria to enter the skin barrier. Afterwards, the skin becomes red, it swells, causing pain and warmth when you touch it. If not properly diagnosed and treated, this skin infection can spread to the nearest lymph nodes, entering the lymphatic system and turning into a seriously dangerous condition that requires immediate medical assistance.

Usually, the most common symptoms include redness of the affected area of the skin, swelling and tenderness, as well as warmth when touching the skin. More severe symptoms include fever, chills, skin dimpling. If you’re asking yourself “is cellulitis painful?” the answer is yes, given the fact it is basically a local skin inflammation, that ends up being extremely uncomfortable to patients. Also, the cellulitis rash can turn into cellulitis with blisters and scab which could also be painful.

Abscess represents a collection of pus within the subcutaneous tissue that turns into a red nodule on the skin that is usually painful and can have cellulitis surrounding it. Even though you can develop abscesses on your skin independent of having cellulitis, sometimes they can be part of the clinical list of dermatological consequences for cellulitis.

The short answer is no, cellulitis is not itchy, at least not in the early stages of development. However, the affected area of the skin could become itchy as a result of the healing process of the skin, itchiness being a good sign.

The erythema (redness of the skin), the warmth and the swelling represent the immune response to the bacteria that reaches the skin. The cells responsible for this immune response travel to the affected part of the skin leading to what it’s called the epidermal inflammatory response which produces the symptoms that can contribute to the diagnosis of cellulitis.

One of the main roles of our skin is to act as a physical barrier in order to protect our body against different pathogenic agents that infiltrate the lymphatic system and eventually the bloodstream. As such, a lesion on the skin allows different bacteria to pass into the dermis and the subcutaneous tissue. This leads to an acute infection of these two layers of the skin that eventually transforms into cellulitis.

One of the most common cellulitis causes is the infection with the A Streptococcus bacteria which is a beta-hemolytic bacteria responsible for an array of different diseases in humans. Even though there are also other types of bacteria that can lead to cellulitis, the group A strep is the most well-known and researched.

There are also a few rare bacteria that can lead to cellulitis, such as:

Given the fact that the cellulitis bacteria enter the body through the skin, specifically through injuries or cracks in the skin, people can’t catch it from other people, therefore cellulitis is not a contagious disease.

Moreover, there are a few medical conditions associated with being at risk for cellulitis, such as:

One particular medical condition that is highly associated with cellulitis is diabetes and that is because people with diabetes have a very high risk of amputation of the lower limbs due to infections such as cellulitis.

Why are people with diabetes at such a high risk? First of all, because these patients are more prone to foot ulcerations that can easily turn into infections. Second of all, one of the consequences of diabetes is poor blood flow in the limbs which lowers sensations leading to an increased risk of limb injuries (patients do not realize they have injured their feet as they do not have the sensation anymore). The decreased blood flow can also impair the body’s immune system to fight against any pathogens. And lastly, the high levels of sugar in the blood are also responsible for restricting the body’s ability to respond adequately to infection.

We now know that lymphedema is one of the most important risk factors for cellulitis. In fact, some studies have shown that it might actually be the strongest associated cause of this kind of infection, even more so than having any form of skin damage, venous dysfunctions, edema or being obese. But what exactly is lymphedema?

Lymphedema is a chronic disorder characterized by enlargement of the limbs (one or more) and it usually has two forms: primary and secondary (which occurs especially after undergoing cancer treatment). As far as the risk factors for developing lymphedema go, the main ones are obesity, pelvic cancer, melanoma or skin cancer, radiotherapy, mastectomy or any other intervention that might cause dysfunction of the lymph nodes.

People who have lymphedema are very prone to developing cellulitis given the impact it has on the lymphatic system which is severely affected and cannot properly battle an infection such as cellulitis. Therefore, it is very important to diagnose and treat accordingly cellulitis in people with lymphedema to prevent the risk of further damaging the lymph drainage routes putting the persons’ immune system and their life at high risk.

Like cellulitis, erysipelas is an acute infection of the skin and soft tissue which can make it very easy to diagnose it under the term of cellulitis. However, erysipelas is characterized by a different clinical pattern and different onset markers.

One thing that is characteristic for erysipelas is that it occurs almost in all cases on one part of the body, the lower limbs being the most affected (almost 80% of cases), then the arms or the face. The symptoms are very similar to those presented by people with cellulitis and they include redness and tenderness of the skin, swelling, warmth and pain. In most cases the affected area of the skin can have that aspect of an orange skin.

The pathophysiology of erysipelas is also very similar with the cellulitis pathophysiology, being characterized by bacterial passage into the lymphatic routes, dilatation of the blood vessels and swelling of the superficial layer of the skin (basically, the typical inflammatory immune response to bacteria).

What is different from cellulitis in case of erysipelas is that the patient can have no obvious wound or skin injury in the affected area and this makes it very difficult to assess and diagnose the problem via exudate cultures. Moreover, one thing that makes it easier to differentiate between cellulitis and erysipelas is the fact that symptoms such as fever, chills, headaches and nausea can precede the onset of any dermatological symptoms by up to 72 hours.

One other characteristic that makes erysipelas distinguishable from cellulitis is the redness of the skin in case of ear erysipelas which is called “Milian’s ear sign”. This has to do with the fact that the outer ear doesn’t have deep layers of dermis or subcutaneous tissue (which are the target in cellulitis infection).

Even though there is a need for being able to correctly distinguish between cellulitis and erysipelas, this difference is becoming less important in the medical practice because most of the time it is almost impossible to make this clinical difference reliably given the fact that the symptomatology is so similar. Moreover, in countries like the US, clinical guidelines don’t even make this distinction when it comes to recommending what types of treatment could be most effective.

Where on your body can you get cellulitis?

Can children get cellulitis?

Yes. Considering the fact that kids are usually adventurous and want to explore the world, this can lead to numerous injuries. Therefore, they are prone to becoming infected and developing cellulitis. In case of cellulitis baby, the reason behind a baby having cellulitis is that they have a particularly soft and fragile skin that is more susceptible to cracks and damage if not taken care of properly.

Usually, healthcare professionals can diagnose cellulitis by performing a physical examination, with two out of four criteria required (edema, erythema, warmth, tenderness). Blood cultures are useful only for patients that have a compromised immune system, patients that have been bitten by an animal or those who show signs of a systemic infection.

Cellulitis nursing diagnosis includes blood tests, cultures from the wounds and rarely ultrasounds as well as gathering information regarding past medical history that is vital in assessing the comorbid medical conditions.

We’ve seen so far that it is quite difficult to diagnose cellulitis given the overlap between its symptoms and those of other conditions, for example erysipelas. In assessing a patient and their symptomatology, it’s important to rule out other infectious or noninfectious illnesses, such as: necrotizing fasciitis, toxic shock syndrome, gangrene, dermatitis, insect bite, lymphedema, folliculitis etc.

Cellulitis medication typically includes antibiotics that are administered considering the severity of the cellulitis. Patients with no signs of systemic infection and no other complications receive oral antibiotics for at least 5 to 10 days. In some cases, the patient can take antibiotics for months, until all the signs of infection disappear. Treatment in this case should also include painkillers, an adequate hydration and caring for the skin damages.

In the most severe cases, it might be necessary to conduct an antibiotic susceptibility testing (antibiogram) to determine what type of antibiotic would be best.

Hospitalization for administering antibiotics might be necessary in case of systemic infection or for those who have a compromised immune system due to other medical conditions.

We discussed earlier how cellulitis in the leg might be the most common type of cellulitis. Cellulitis leg treatment includes the same medication as any other type of cellulitis, but in case of comorbidity with diabetes or obesity, a special care to the wounds is essential, in order to prevent the unfortunate event of having to amputate the limb.

Cellulitis healing stages – as we’ve seen, the time required for cellulitis to heal depends on the severity of the infection. Therefore, it can heal in 5 to 7 days, in case of mild symptoms, or weeks and even months, in case of severe infection.

If not diagnosed and treated adequately, cellulitis infection can lead to a dangerous diagnosis: cellulitis with sepsis. This means that the patient has all the symptoms of cellulitis, including high fever, tachypnea, tachycardia and shows an abnormal white cell count, signaling a systemic infection that can be fatal and requires immediate medical assistance.

Cellulitis can be recurrent, given the fact that you can get infected with bacteria all the time. However, there are a few preventative measures you can take in case of damage to your skin:

It is quite common nowadays to discuss about cellulite, but not so much about cellulitis. The two terms might sound incredibly similar, but they refer to two very different conditions. We’ve established that cellulitis is an infectious process of the skin, caused by bacteria infiltrating the subcutaneous tissues, leading to symptoms characteristic for an infection, such as tenderness and redness of the skin, warmth and edema. But what is cellulite?

Cellulite is a skin condition that is very common and also pretty harmless. It represents the accumulation of fat cells in a way that gives the skin a lumpy feeling and aspect (that orange peel look). It is more prevalent in women given the fact that the female fat cells are round, and the male fat cells have a square shape, which means that even if there is an accumulation of fat cells in men, it’s harder for it to become visible on the surface.

Unlike in the case of cellulitis, in case of cellulite there is no treatment necessary, only cosmetic or dermatological interventions that can ameliorate the aspect of the skin. In addition, good hydration, a healthy diet and exercise can help prevent or reduce the density of this kind of cellulite.