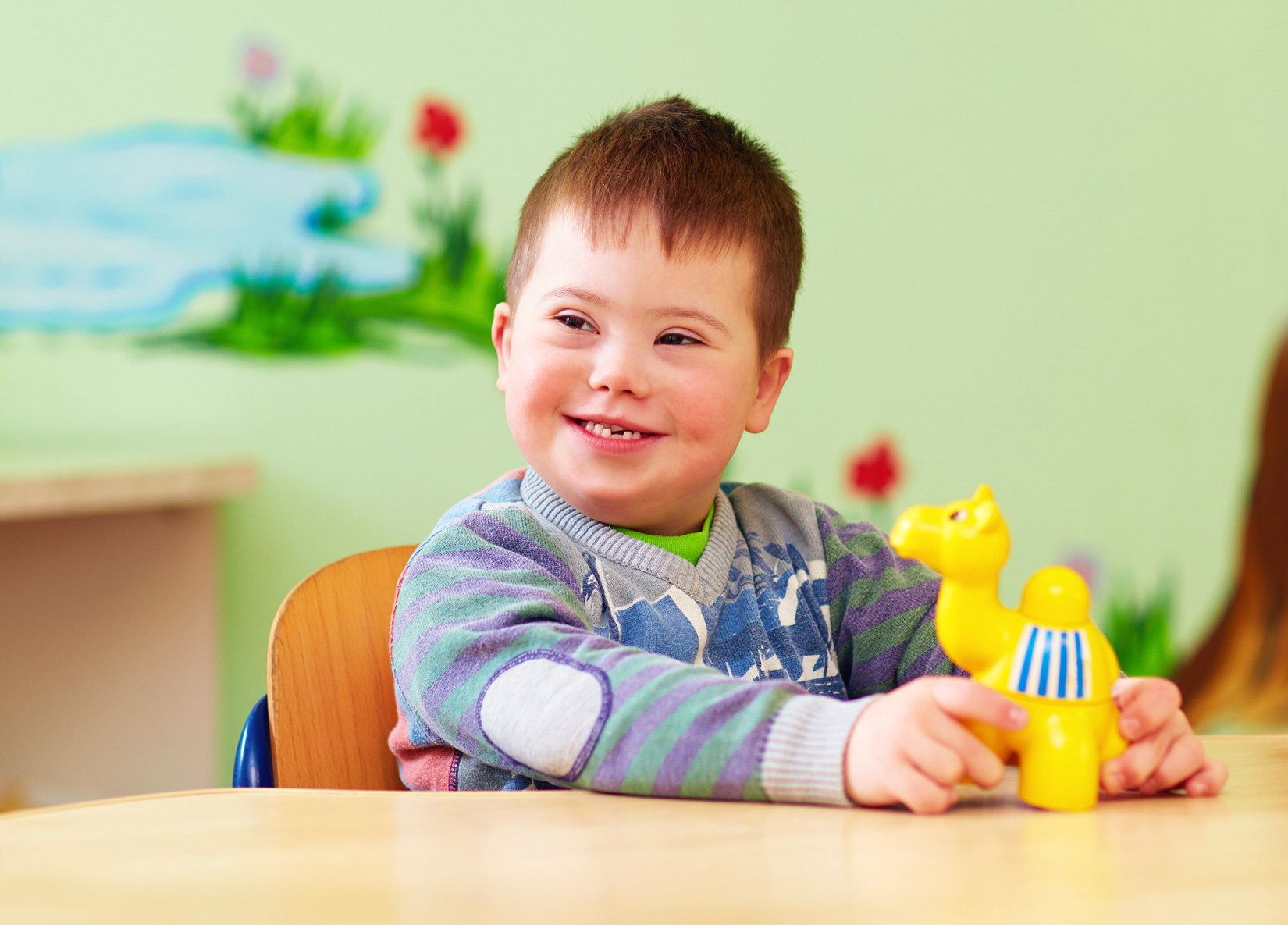 Before we dive in into the subject of genetics and symptoms of Down’s syndrome, let’s have a quick look at some history facts regarding this subject.

This syndrome was first described in 1866 by John Langdon Haydon Down, a British doctor that stated that the syndrome is characterized by three main things: particular dysmorphic characteristics, chromosomal aberration and mental retardation. Even though this condition was believed to be caused by some chromosomal abnormalities since the 19th century, it was not until 1959 when Jerome Lejeune, a French geneticist, discovered the true cause of Down’s syndrome: the presence of an extra copy of chromosome 21, adding one more chromosome for those patients who will have a total of 47 chromosomes instead of 46 (which is the normal number of chromosomes in humans).

What are chromosomes and how does genetics affect the development of a baby? Chromosomes are molecules that contain information about every characteristic of the human body. One chromosome is made up of protein and DNA which is basically the manual with genetic instructions that is inherited from the parents. One person typically has 44 chromosomes like these, that are organized in pairs, resulting in 22 chromosome pairs that are also known as autosomes. Additionally, humans have one more pair of chromosomes, X and Y, called the sex chromosomes because their combinations determine one’s sex – XX for females and XY for males.

So how does one person get its chromosomes? This all starts with the moment an egg from the biological mother is fertilized by a sperm from the biological father. The cells in the egg and sperm are also known as gametes and they are produced during the process of cell division, called meiosis. This means that gametes have 23 chromosomes, so half the number, with one of them being either X or Y. Gametes from the mother only have the X chromosome, while gametes from the father usually are divided – half of them have the X chromosome and the other half the Y chromosome. In the process of fertilization, female gametes combine with male gametes to produce a zygote that will have two sets of 23 chromosomes, adding up to the number of 46 chromosomes that is considered normal in humans. Usually, the terminology is that women are 46XX and males 46 XY. This, however, can vary due to the fact that the process of meiosis and then fertilization is a very complex one and it requires a lot of steps that can sometimes be influenced negatively by different factors (individual or environmental) that will result in mutations or chromosomal variations.

Down’s syndrome is a chromosomal condition so what exactly happens with Down’s syndrome chromosomes? We’ve established that humans typically have 23 pairs of chromosomes, so that means every cell in the body has 46 chromosomes, half from the biological mother, half from the biological father. Chromosome 21 is the smallest in humans, making up approximately 2% of the DNA in humans. Researchers have tried to identify the number of genes in each chromosome and what they are responsible for, and in the case of the 21st chromosome, they have estimated a number of 200 to 300 genes. What these genes do is that they give instructions for manufacturing proteins which are essentials molecules that have different functions within a cell (this process of protein genesis has two big steps known as transcription and translation).

Given the fact that the number of chromosomes can vary of that there are different chromosomal anomalies, there are a few conditions associated with chromosome 21:

Trisomy 21. This is the most common type of Down’s syndrome, with almost 95% percent of cases of this condition being caused by the presence of an extra chromosome 21 in every cell in the body, instead of the usual pair.

Can Down’s syndrome be inherited?

We’ve seen the three types of Down’s syndrome and what causes them, but a relevant questions arises: can this genetic condition be inherited? Usually, no, considering it’s caused by something going wrong with the chromosomes during cell division after fertilization. However, in the case of translocation Down’s syndrome it is possible to inherit the extra chromosome 21 attached to another chromosome from one of the parents (usually the mother). 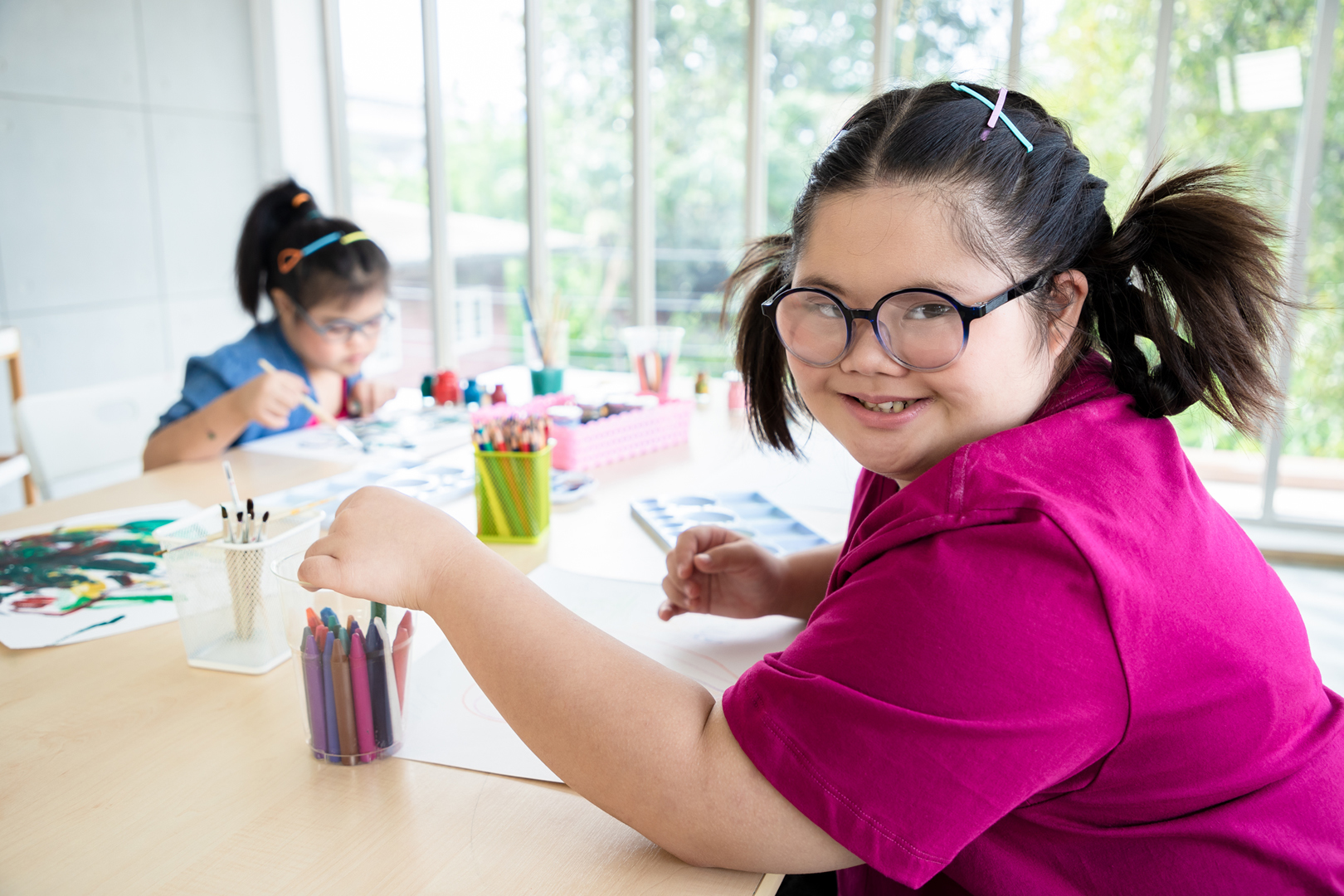 Down’s syndrome effects, symptoms and signs make this condition one that can be very easily recognized, even for someone who isn’t a professional in the field of medicine. While there are some distinctive facial features common in all people with Down’s syndrome, the intellectual abilities and health conditions associated with this syndrome can vary from one person to another.

Some of the most common distinctive physical features of Down’s syndrome are: flattened face, short neck, small head, almond-shaped eyes with upward slanting lids called palpebral fissures (Down’s syndrome eyes), white spots on the iris (known as Brushfield’s spots), protruding tongue (their tongue tends to stick out most of the times), small ears, hands and feet, broad palms with palmar crease (just one line across the palm of the hand), poor muscle tonus, loose joints. Even though at smaller ages, kids with Down’s syndrome can have an average size, their growth process is slower and they usually stay shorter than kids their age.

Some other effects of this genetic condition are developmental delays and behavioral difficulties. Speech and language in particular may develop slowly and later compared to children the same age that don’t have Down’s syndrome; speech can sometimes be difficult to understand as well. Some of the behavioral difficulties in people with Down’s syndrome can be attention problems, a stubborn and neurotic personality or obsessive-compulsive behaviors.

As they get older, people with Down’s syndrome are at high risk of developing some serious health complications, such as:

Given the personal characteristics of a person with Down’s syndrome and their risk of developing different physical and physiological conditions, they are at great risk of also having mental health issues, such as anxiety and general anxiety, depression, obsessive-compulsive disorder, difficulties related to sleep, autism and progressive neuropsychological loss. All these depend very much on the age and individual characteristics.

One mental health condition that is relatively high in prevalence in people with Down’s syndrome is autism. In the medical field the co-occurrence of these conditions is known as a dual diagnosis. Some of the symptoms and signs of people who have this dual diagnosis (Down’s syndrome and autism) are difficulties in changing routine patterns, stereotypical behaviors, challenged communication skills, higher preoccupation with rituals and higher levels of hyperactivity, conduct problems and different degrees of learning disabilities.

Considering the amount and variety of health conditions associated with Down’s syndrome, one can become curious about what is the life expectancy for individuals with this genetic syndrome. According to scientists, in the ‘60s, on average, people with Down’s syndrome had a life expectancy of only 10 years old. More recently, in 2007, on average, this number increased exponentially to 47 years old. This statistic begs the question if there are some factors that contribute to how long someone with Down’s syndrome can live and of course research is here to deliver. Some of these factors include weight at birth, race (with black or African-American babies with Down’s syndrome having a lower chance of surviving past the first year compared to white babies) or whether or not the babies are born with congenital heart defects.

Right now, there are two types of tests that can detect Down’s syndrome while a woman is pregnant (Down's syndrome pregnancy) which are: screening tests and diagnostic tests:

Blood tests and ultrasounds and their results are to be taken with precaution because one cannot rely entirely on the precision of a diagnosis made solely on these two screening tests. However, their advantage is that these tests are much safer for the mother and the baby.

Among some of the markers of Down’s syndrome that can be assessed during an ultrasound in the second trimester of the pregnancy, there are ventricles in the brain that are dilated, nose bone that is absent or small, fluid at the back of the neck, bright spots in the heart region, swelling of the kidneys, a shorter arm or thigh bone.

Unfortunately, there isn’t much to be done to prevent Down’s syndrome. Given the fact that this genetic condition occurs because of the presence of an extra copy of chromosome 21 as a result of cell division difficulties, prevention is not really an option. However, we’ve seen that in the case of translocation being the cause of Down’s syndrome, parents can benefit from a consultation with a genetic counselor before getting pregnant, in order to see what are their chances of having the translocation and passing it down to a potential baby. This is also the case for parents who already have a child with Down’s syndrome.

Down’s syndrome is a genetic condition that has become more prevalent in recent times. It has also gained quite a large body of research which has allowed for people living with this condition to live longer and more qualitative lives if themselves and their parents have access to the right resources.