Everything about kidney failure 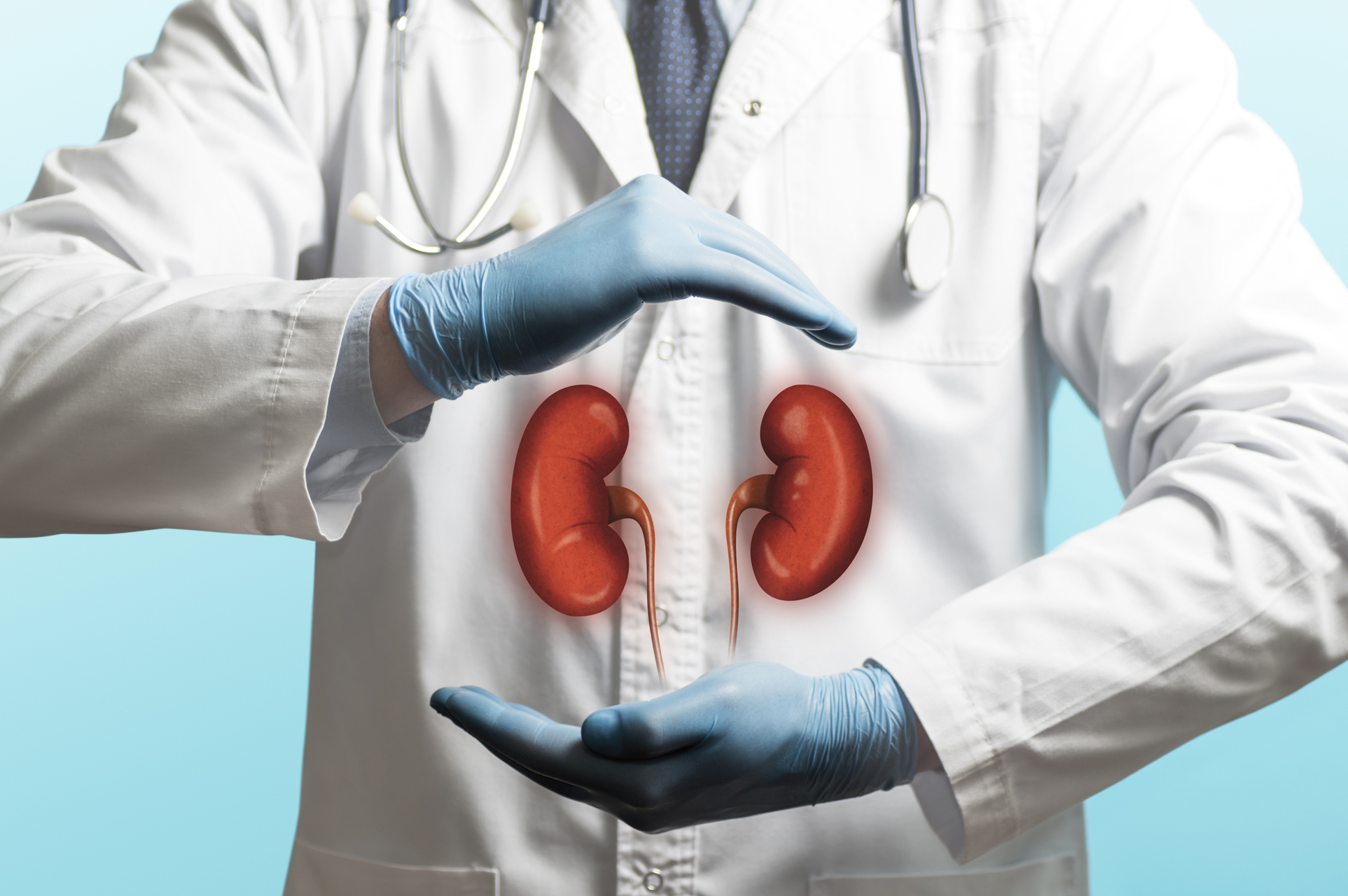 The human body has two kidneys located on either side of the spine, they are bean-shaped and measure up to 6 cm in diameter. Anatomically, they occupy a retroperitoneal position (behind the peritoneum) and they are overhung by the adrenal glands.

The kidneys are responsible for filtering the blood of its toxins and forming urine as a by-product which will be excreted out of the body through the urinary system.

Functions of the kidneys

The functional unit of the kidneys is called nephrons. There are millions of nephron units within one kidney. Here are some functions of the kidney:

Kidney damage, resulting in what is called renal failure, depending on the conditions and the speed of treatment, can be reversible or irreversible called end-stage renal failure (ESRD).

Primarily there are two main types of kidney failures - acute and chronic failures. Each is further divided into into subtypes.

Sudden and abrupt loss of renal function is called acute renal failure. This typically occurs within a matter of a few hours to a few days. The failure, in this case, can be reversed on remission of the cause of the diseased state. It can be due to the following reasons:

According to the KDIGO criteria in 2012, AKI can be diagnosed with any one of the following:

Acute kidney injury (AKI) has recently superseded ARF because it encompasses the complete clinical range, from a moderate rise in blood creatinine to overt renal failure.

Sudden insufficient renal blood supply can lead to high toxin build-up in the blood. Urine output is subsequently reduced to a great extent and the body may enter a state of shock, if not treated immediately. Heart failure (CHF) is one of the more prominent outcomes of this type.

Loss of kidney function itself is referred to as intrinsic ERF. The primary cause of this type can be cancer, autoimmune diseases, kidney stones, trauma, injury, alcohol and toxin content, etc. The remission begins with the treatment of causative factors. However, acute tubular necrosis and acute interstitial nephritis are the two main causes of intrinsic ERF

Kidneys are responsible for filtration of blood and its resulting urine formation. This urine must be excreted from the body in order for the process to reach its completion. Post renal complication is associated with the inability to remove urine from the body. Any point in the urinary tract beginning from the ureters up to the cervix can be linked to this type of renal failure.

Loss of renal functions that occurs over a course of a few years is referred to as chronic renal failure. The reduced value of GFR i-e <60ml/min/1.73m2, frequently for up to 6 months is the defining criterion for the chronic disease. There is a wide range of reasons for it, such as:

Optimum blood supply to the kidneys is crucial not only for the blood filtration process but also for the oxygenation of the nephrons. Insufficient blood supply to kidney nephrons results in decreased glomerular filtration rate (GFR). Kidneys with a chronic disease cannot cope with reduced GFR for a prolonged duration. Thus, the kidneys begin to shrink and reduce in size and volume. This process may prolong to a few years before it can cause renal failure.

Kidneys are the filtration system of the body. In addition, the regulation of hormones, blood pressure, and salt ion balance are some of its crucial roles, too. If the kidneys begin to lose their functions over a period of time, then such failure is categorized as intrinsic damage.

Similarly, as in the case of acute failure; post-renal chronic failure is the stage when the urine excretion is haltered. Damage to the urinary tract at any point for a longer duration can lead to build-up of toxins in the nephrons. If not diagnosed and treated on time, this can progress to renal failure, too.

Failure of the kidneys Pathophysiology can be defined as a series of processes that occur during an acute insult in the setting of acute renal failure, as well as progress over time in the case of chronic kidney illnesses. AKI is broadly categorized into three groups:

The pathophysiology of CRF is mostly associated with unique starting mechanisms. Adaptive physiology plays a role over time, resulting in compensatory hyperfiltration and hypertrophy of remaining viable nephrons. As the injury progresses, histopathologic alterations such as glomerular architectural distortion, aberrant podocyte activity, and filtration disruption lead to sclerosis.

The history and physical examination findings associated with renal failure include:

Dark-colored urine appears thicker in concentration. The color changes from light yellow to dark yellow to brown and even red during the end stages. The characteristic smell of urine also becomes more pungent and profound.

A rash might appear when your kidneys are unable to eliminate waste from your body. One rash that arises in persons who have end-stage renal illness involves tiny, dome-shaped, and exceedingly irritating pimples. As these bumps disappear, new ones might appear. The little lumps might sometimes come together to produce rough, elevated areas.

As mentioned in the history and physical exam chapters, patients with renal failure exhibit a range of clinical manifestations. Many individuals are asymptomatic and have an increased serum creatinine concentration, abnormal urine tests (such as proteinuria or microscopic hematuria), or abnormal radiologic imaging of the kidneys that is discovered by chance. The following are the essential laboratory and imaging investigations that should be ordered in patients with renal failure.

If initial tests do not show an etiology, more sophisticated imaging techniques might be considered:

This is the initial and mild stage. There is no substantial damage to the kidney functions and up to 90% of function is still retained and saved. The GFR value is also nearly more than 90ml/min. since the damage has merely begun, it can be reversed. Doctors recommend a regimen of medications along with lifestyle modifications. Avoiding alcohol and drugs, fizzy drinks, salty food, high protein diet etc. should be eliminated to achieve progress.

This stage is a step further from stage I, but still salvageable. The GFR value lies between 60 to less than 90ml/min. The patient begins to experience symptoms of renal deficit more frequently. Proteinuria, i.e. protein in the urine as well as creatinine in urine is observed during urine C/E testing. Uncontrolled diabetes and hypertension are almost always present in such patients. Healthy lifestyle maintenance becomes crucial and decisive at this stage of chronic kidney disease (CKD).

This mild to moderate damaged condition of Stage III is further categorized into stage 3A and stage 3B. This classification is done on the basis of eGFR values obtained in renal function testing (RFTs). The overall eGFR is reduced between 30 to 59ml/min. Even though the condition has reached a substantially damaged state, some patients may still remain asymptomatic. However, others may experience edema in their hands and feet, joint pain, pain while urinating, hypertension, etc.

although the kidney and nephron damage cannot be reversed at this stage, it is highly possible to stop the disease from progressing further. A healthy lifestyle and eating habits are key factors in controlling the disease.

The following symptoms are more frequently seen at this stage:

What is the diagnostic testing done at stage 4?

Treatment options for renal failure vary greatly and are determined by the etiology of the failure. Options are broadly classified into two categories: treating the cause of acute renal failure vs replacing renal function in acute or chronic circumstances and chronic diseases. The therapy for renal failure is summarized here.

The treatment regimen at this point has two objectives:

Since the glomerular filtration has reduced substantially at this stage, therefore, the immediate goal is to start the dialysis process as soon as possible. Following are the main treatment courses adopted:

This is also called end-stage renal disease (ESRD). The kidney function at this point has severely been compromised and reduced. The eGFR is less than 15ml/min. Some of the frequently seen symptoms are:

Since the kidney function at this point is close to none, it is, therefore, critical that the patient is immediately placed on dialysis. In addition, a transplant is a more permanent treatment.

Instead of canned veggies, go for fresh or frozen vegetables. Before preparing or eating canned veggies, drain and rinse them to eliminate excess salt. Avoid processed meats like ham, bacon, sausage, and lunch meats. Instead of crackers or other salty snacks, eat fresh fruits and vegetables.

The kidneys play both regulatory as well as purification and excretion roles in the body. Being a vital organ, the consequences of kidney failure can be dire. The following are the complications associated with renal failure:

The word kidney failure refers to the kidneys' inability to execute excretory functions, which results in the retention of nitrogenous waste products in the blood. The two types of kidney failure are acute and chronic renal failure. The end-stage renal disease occurs when a patient requires renal replacement treatment (ESRD).

Kidney failure is often managed by an interprofessional team of healthcare experts devoted to preserving renal function. Kidney failure has a high morbidity and death rate, and it costs the healthcare system billions of dollars each year.

When monitoring patients with renal failure, the nurse should take note of their urine output, potassium levels, blood sugar, and creatinine levels. Blood pressure and blood sugar control are critical in the prevention of renal disease. The nurse should regularly monitor all diabetics' renal function and send them to a nephrologist if it is worsening.

The pharmacist should highlight the significance of drug adherence in the management of high blood pressure. These individuals should be closely monitored to ensure that their renal function does not deteriorate. Finally, the patient should be counseled on good food, exercise, quitting smoking, and refraining from alcohol. If kidney disease is not properly controlled, it might progress to full renal failure, necessitating dialysis.