Find out more about Chickenpox and how to treat it fast 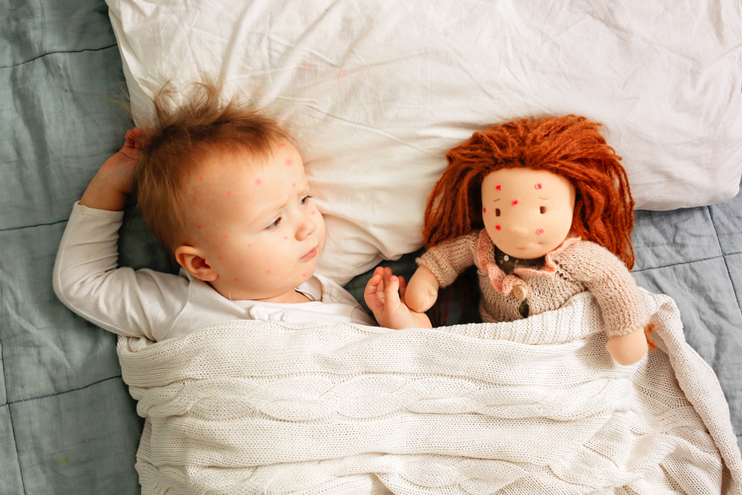 Chickenpox or varicella is a highly contagious infection caused by the varicella-zoster virus (VZV) that commonly affects the children and generally the unvaccinated population or those who have not had the disease before. Chickenpox can be life-threatening in those who have a weaker immune system in babies and pregnant women. Vaccination against chickenpox is highly recommended by the U.S. Centers for Disease Control and Prevention (CDC). The first vaccine against chickenpox was approved in 1995, and since then, people who have been vaccinated have reported minimal complications from the disease.

The main symptom of chickenpox is represented by an itchy rash that can be found anywhere on the body. This infection happens in 3 stages, as follows:

Other symptoms that may accompany the rash include:

How is chickenpox spread? 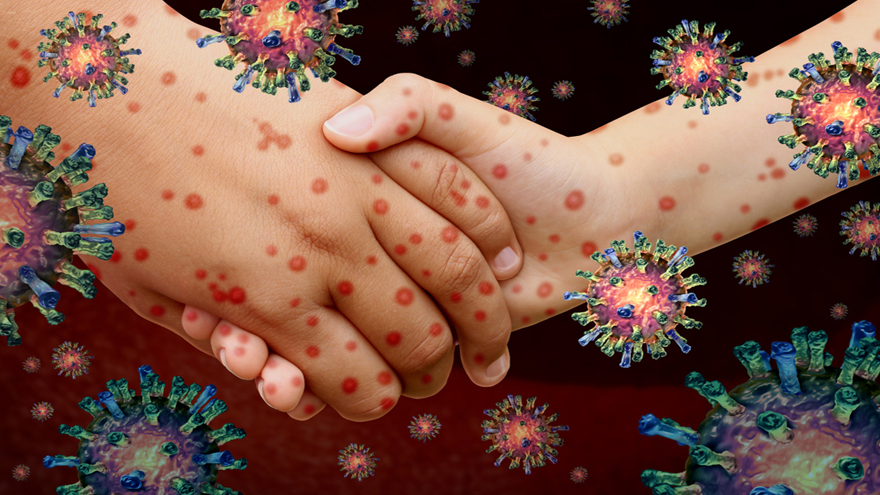 Chickenpox is more common in children, but it can occur at any age. Getting chickenpox as an adult comes with higher risks; therefore, vaccination is very important. After exposure to chickenpox, it may take one to three weeks before you get any symptoms. In the meantime, it can be spread up from one day before showing symptoms to about a week after the first rash.

Chickenpox, although not as dangerous as it was before the CDC's approval of the vaccine, can cause irritating and annoying symptoms. However, treatment for chickenpox can change if you develop complications from it. In this scenario, the treatment will differ and will be tailored for you.

Staying hydrated is highly important when ill, especially if you or your child have chickenpox.

Besides that, attending to the itchy rashes is essential as children tend to have less self-control when it comes to itchiness. A few measures to prevent that include:

To get rid of the varicella virus, antivirals could prove to be necessary. For example, Acyclovir is highly effective in treating chickenpox, if applied in considerably higher doses than those for treating the herpes simplex virus (HSV). Sometimes, IV therapy with acyclovir for 5 to 10 days is effective in newborns and immunocompromised patients, but only if treatment is begun early in the infection.

However, oral acyclovir is effective only if administered within 24 hours of the first rash. Acyclovir must be administered with caution during pregnancy and only if the doctor advises you so.

The role of immune globulins and antihistamines in chickenpox treatment

For the immunocompromised population varicella-zoster immune globulin, human (VariZIG) can be used for passive immunization. In this case, the agent does not prevent the disease, but it can make it more controllable and diminish the risk of complications. It is most effective when administered within four days of the infection.

Having had a chickenpox infection means that the virus will lay dormant in your nerves, hence why it can reactivate later in life, which is what causes shingles. Shingles also causes itchy and sometimes painful fluid-filled blisters and rashes. Shingles is also an infectious disease that can be passed on the same way as chickenpox.

Unlike chickenpox, shingles is not a life-threatening condition, however, it can be painful.

Vaccines are proven to help reduce the risk of developing shingles later in life. If you think you may have shingles, talk to your doctor as soon as possible, as early treatment shortens the infection and lowers the chances of any complications. One of the complications that commonly appears from shingles is postherpetic neuralgia. Postherpetic neuralgia affects the nerves and skin, which can eventually lead to chronic burning pain that usually lasts one to three months.

When it comes to symptoms, shingles generally affect only a smaller part of the body in comparison to chickenpox. This usually means that only one side of your body may be affected.

Some of the most common symptoms include:

Sometimes people who have shingles may experience a high fever, light sensitivity, tiredness, and headaches. These are, however, less likely to happen.

The most definitive symptom of shingles is pain. Sometimes, the pain might not be accompanied by a rash. This is a tough situation, as you will not be able to consider the suffering of shingles, and it might even get difficult to diagnose it. Make sure you see your general practitioner in either of these cases:

When it comes to treatment, antiviral medication is the gold standard. This medication speeds healing and reduces your risk of complications. Such medications are Acyclovir and Valacyclovir.

Shingles is also transmitted by coming into direct contact with open ulcers or sores. In case you give it to someone who has never had chickenpox they will not get shingles, but they will develop chickenpox. Therefore, if you suffer any of these health conditions, try to maintain your blisters covered to diminish the risk of transmitting the virus to other people.

Chickenpox in pregnancy - can it cause any problems for you and your baby?

Having chickenpox in pregnancy can be dangerous to both you and your baby, as it can increase the risk of getting pneumonia, which can become even more dangerous in pregnancy.

Symptoms of pneumonia to look out for include:

Depending on your pregnancy stage, chickenpox can create various problems:

If you know you have been exposed to the varicella-zoster virus during pregnancy, let your doctor know. Even though you cannot get the vaccine during this period of time, your doctor can give you an injection of immunoglobulin products (antibodies) that, if given during the first ten days since the exposure, can considerably reduce the risk of getting chickenpox.

If you are considering getting pregnant and you have not had the vaccine for chickenpox, yet, you should be considering it. Catching the virus during pregnancy can seriously harm your baby. However, it is generally recommended to wait for at least three months after the second dose of the vaccine before trying to conceive.

Congenital varicella syndrome is a rare condition that occurs due to a mother’s infection with chickenpox during early pregnancy or up to 20 weeks of gestation. These newborns have very distinctive abnormalities at birth that indicate congenital varicella syndrome. They may have a low birth weight due to abnormal delays in the growing and the developing period in the womb, also known as intrauterine growth retardation. Besides abnormalities concerning the arms and legs, these babies might also have brain abnormalities, such as cortical atrophy (the degeneration of the outer layer of the brain), ventriculomegaly (abnormally large ventricles in the brain), and abnormalities in the autonomic nervous system. The signs and symptoms of congenital varicella syndrome can vary since some newborns only develop limb problems, while others can also have neurological abnormalities. Always see a doctor if you know you had chickenpox in pregnancy, especially if you had it within the first 20 weeks.

Chickenpox in babies and newborns or neonatal chickenpox

Chickenpox can be very dangerous for neonates as it can pose serious complications. Newborns have weak immune systems that put them at a higher risk of life-threatening conditions.

Common symptoms of chickenpox in newborns include:

In newborns, chickenpox-like rashes that can resemble blisters may appear suddenly one to two days after the first flu-like symptoms. These can also appear in unexpectable areas, just like the inside of the cheeks, on the eyelids, or in the genital area. These can lead to more bothersome symptoms.

Chickenpox generally lasts for two weeks, while the first few days are the worst when it comes to itchiness. It is highly contagious in the first 2 to 5 days of infection, which means that your baby may pass it to someone else, even when there are no visible symptoms yet. After the blisters have dried up and become crusty, your baby will not be contagious anymore.

This disease can pose serious complications in infants, but only in some rare cases. Some of these include:

If your newborn has chickenpox, make sure to keep their nails trimmed and clean and have them wear even mittens. This can make it more difficult for them to scratch their blisters and cause scarring or infections.

Ask your pediatrician if you may use a calamine cream to soothe the itchiness and anti-inflammatory over-the-counter medication to alleviate the pain. Make sure they do not become dehydrated, as chickenpox can cause high fevers.

Always consult with your doctors if any of these circumstances happen to you:

Complications from chickenpox are not as common anymore, but they are possible. Generally, healthy people who get chickenpox do not develop serious complications. These are more likely in newborns, people with immunity issues, HIV positive, who have had transplants, and pregnant women. These may include:

As rare as it is, Reye’s Syndrome is a very dangerous syndrome that causes swelling in the brain and liver. It generally affects younger people, especially children, and teenagers, after suffering an infection, just like chickenpox or even flu. Early diagnosis is essential, so definitely look out for these most common Reye’s Syndrome symptoms:

Although the exact etiology of Reye’s syndrome is unknown, it is thought that it is caused by aspirin intake, especially if taken after a varicella infection. If you have a fever or pain due to chickenpox, try paracetamol instead of aspirin or other over-the-counter pain and fever medications. In case any of the following happens, emergency medical attention is required:

Generally, without a proper diagnosis and treatment scheme, it can cause permanent brain damage and even death. 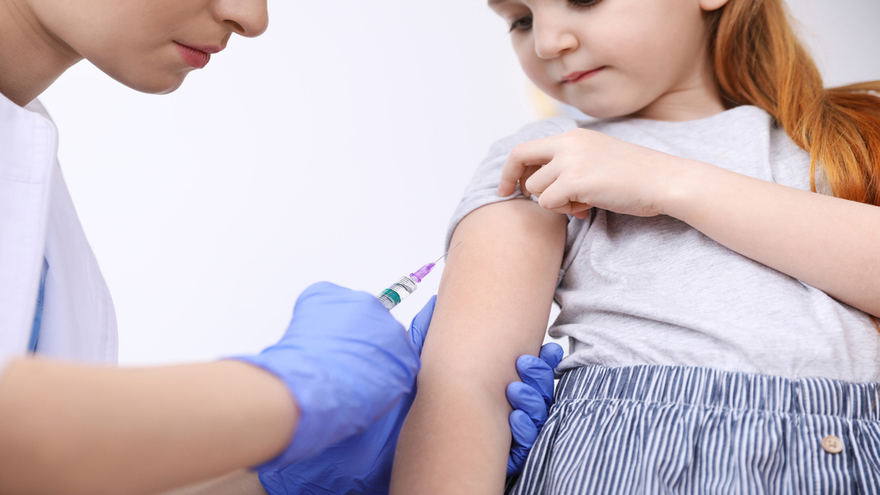 The chickenpox vaccine is the most efficient method in protecting against chickenpox, as it has a 90% success rate. Two vaccine doses are recommended: one between the ages of 12 and 15 months and the other one between the ages of four and six years. If your child is over 13 and has not had any dose yet, they can get the doses at least one month apart. You should avoid giving your child aspirin or other medicines that contain salicylates up to six weeks post-vaccination. These can increase the risk of Reye’s syndrome. However, in some cases, the chickenpox vaccine is contraindicated. Examples of such cases are as follows:

You should always consult with a healthcare professional before getting the vaccine.

Chickenpox does not usually cause severe symptoms in vaccinated people. You may have a lower fever and a milder rash that may not even develop into blisters.

When to see a healthcare professional?

Always seek help from your general practitioner if you suspect anything might be wrong. Always look out for:

How to prepare for a doctor’s appointment? 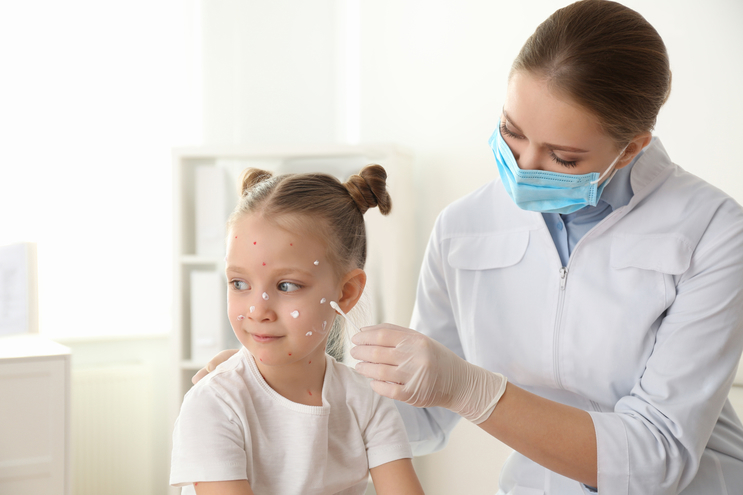 Before going to your appointment, ask if there are any restrictions you should follow. Write down the history of the symptoms, any medical information such as health problems, other diseases, or medicines you take, and questions to ask your doctor to make sure you do not forget any.

Some questions you could ask include:

What you can expect from your doctor?

You may expect your doctor to ask you to limit contact with anyone, especially vulnerable groups of people, like unvaccinated people, pregnant women, or babies.

Chickenpox, caused by the varicella-zoster virus, is a highly infectious disease that can affect the entire body. One of the most common viral diseases in children, chickenpox usually clears up on its own within a few days or weeks. However, children with compromised immune systems and adults may have more severe reactions to the disease. Here are the most important Do’s and Don’ts for chickenpox: