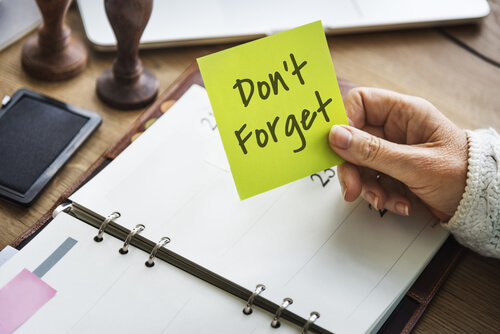 You walk into a room, and stand there, suddenly feeling empty, your mind blank. Why did you come here? Initially, you feel a bit irritated with yourself for this forgetfulness and walk back to where you came from. Very often, when you jog your memory by retracing what you were doing or thinking, you do remember! This short term memory loss is one of the common types of memory loss problems.

What are the other reasons for memory loss? When you read something, and cannot remember what you read a few minutes or sometime later, when someone tells you something important, and you end up not doing it at all. When they ask you “why?”, your only response is that they never told you anything like that at all. This may sound alarming but happens often. This could be absent-mindedness or because you did not pay attention when they were talking with you.

But when this starts happening  too often, you have cause to worry a bit about your forgetfulness and wonder what is the cause? . Is it just short term memory loss or a serious memory loss disease, like Dementia or Alzheimer’s? The alarm bells ring about your forgetfulness. Sometimes you can’t remember a person’s name, it’s on the tip of your tongue, but you cannot articulate it. This is Blocking, where a different thought intrudes on the one you are trying to retrieve. You tend to stress more if you are older, but forgetfulness is not just a sign of advancing age.

What causes memory loss and forgetfulness? Memory impairment and short-term memory loss can have many reasons. These could include the following:

Perhaps the most common cause of forgetfulness at any age, inadequate and fitful or restless sleep can also lead to anxiety, being on edge, restlessness. These again are causes of memory loss.

Overwork leads to fatigue that can dull your memory when some brain connections slow down. Tensions at work or on the homefront can lead to your recall facility being turgid. Lack of exercise will add to this. Stress and anxiety also prevent the formation of new memories and impair the recall of old ones.

Antidepressants, anti-epileptic drugs, heartburn drugs, non-sedating antihistamines, and bladder-control medicines are some kinds of medications that have a physiological effect on the chemistry of the body, which leads to forgetfulness.

Too much alcohol consumption is not just detrimental to general health and well-being, liver disease, etc., but seems to have an effect that is not so well known. It leads to short term memory loss. So don’t go for that additional ‘one for the road’!

Some people have a thyroid that is not functioning properly. If it is not performing to optimum capacity, it can lead to a lack of sleep and depression. This, in turn, results in memory impairment and, unless treated, can lead to chronic memory loss.

Some common signs of depression are a general lack of pleasure in activities that normally interest you, fatigue, lethargy, lack of drive, and an alarming blanket of sadness that envelopes your very being. There is a feeling of helplessness, and all these often lead to memory loss and forgetfulness.

We’ve looked at the salient causes of forgetting everyday things. When we look at what causes memory loss and forgetfulness, the above factors are the most common reasons.

However, among other factors are fatigue and lack of exercise.

Fatigue can dull your memory, but persistent, serious fatigue might have a medical reason and needs to be evaluated by a doctor. When you do a physical workout, you can feel your heart pumping faster, reaching oxygen-rich blood to the brain, and keeping you mentally sharp and alert. Ongoing research studies reveal that regular and moderate exercise stimulates parts of the brain that are involved in memory function. This is probably why physically active people display less forgetfulness as they age, compared to those with more sedentary lifestyles.

Keep your articles of daily use, like wallet, keys, spectacles, mobile phones in the same places every day.

Note it all down

Don’t rely on your brain to remember dates, names, places, details, etc. Use a pocket notepad, a sticky note, or a voice recorder. Use memory mnemonics – easy codes for you to remember long pieces of information.

Focus on one thing at a time

‘Multitasking’ spoils all the tasks because the brain can do only one thing at a time.

If you need to remember something vital, look at it more than once to absorb the information.

Keep a small cup for your medicines on your dining table, so you will remember to take your tablets after meals.

Make a checklist of your daily patterns to help you cope with forgetfulness.

Do you sleep enough every night? Do you get restful sleep? If not, you will be feeling unrefreshed, and fatigued throughout the day, leading to memory impairment. You should consult your doctor to look at medication to help you relax.

If you are taking medication for pre-existing health conditions, like blood pressure drugs, antidepressants, tranquillisers, anti-epileptic drugs, heartburn, bladder control drugs, antihistamines, etc., they are likely to affect memory by causing sedation or confusion. Your doctor can advise you on alternative brands or drug combinations that will not lead to memory loss and forgetfulness.

Certain conditions like Alzheimer’s might call for direct memory loss treatment. This could be a mild stimulant, or in some cases, doctors may advise officially approved memory disorder drugs for early Alzheimer’s. These increase the brain’s levels of neurotransmitters, thought to be important for memory formation. But these are prescribed only after trying behavioural changes, prosthetic devices like reminders and notebooks, and other memory rehabilitation steps.

Memory loss treatment is an area of ongoing research and study. Meantime, new and interesting methods of dealing with memory retention are being innovated and tested. An exciting and effective device is the creation of a new typeface or font that obviates forgetfulness by boosting focus, learning, and memory retention! Australia’s RMIT University’s new font, Sans Forgetica, has features like a slight 8-degree backward tilt, and gaps in the fonts that slow down reading so that cognitive processing is enhanced, helping the reader absorb the information clearer without rushing through the written matter. It is meant to be used as a highlighter to emphasise important bits of information.

But it needs to be emphasised that sometimes, just getting more sleep, switching medication, training the mind to seek silence in meditation, or a similar stress-reduction program could get your memory back on track. Your body and brain have rebelled against abuse and need to be attended to. Do not panic: approach forgetfulness with a calm, clear mind and fight it scientifically.

The most known types of memory problems are different kinds of Dementia. Working memory or short term memory loss could occur due to impact during accidents and is sometimes reversible. Transience is a tendency to forget facts and events over time because they are not used. Again, misattribution is a problem where you remember something accurately in part but misattribute some (perhaps) important detail to another source. This is one of the causes of memory loss. Suggestibility is when your memory of an event is altered because of the power of suggestion of something you learnt about it after the event. When your memory is altered by your perceptions or personal biases, the problem is bias. The persistence of memories of traumatic events, fears or negative feelings is a type of memory problem called persistence.