Learn all about poison ivy

Poison ivy is also sometimes referred to as Rhus dermatitis or Eastern vine. Biologically, it is called as toxicodendron radicans. It belongs to the family anacardiaceae. Another famous plant of this family is the cashew plant. This plant is notorious for its allergen properties. It has the tendency to cause rash and allergic reaction in almost 85% of the world population.

Habitat: The plant is found in almost all habitats except in hot, arid areas such as deserts. It is mostly found in temperate habitat areas where there is a lot of sun exposure, as well as high humidity. They have a tendency to grow in both urban and suburban areas. They are widely spread from North America to Mexico.

Nature: The poison ivy plant grows into bushes and spreads rapidly. Due to their rapid growth in temperate regions, they form mounds of bushes around the edges of forests and mountains. These plants benefit greatly from the carbon dioxide released from the trees.

Other common types of poison ivy

It is found in different forms but some forms are more famous than the others. These include:  Poison oak (Toxicodendron pubescens), Poison sumac (Toxicodendron vernix) and poison sap. 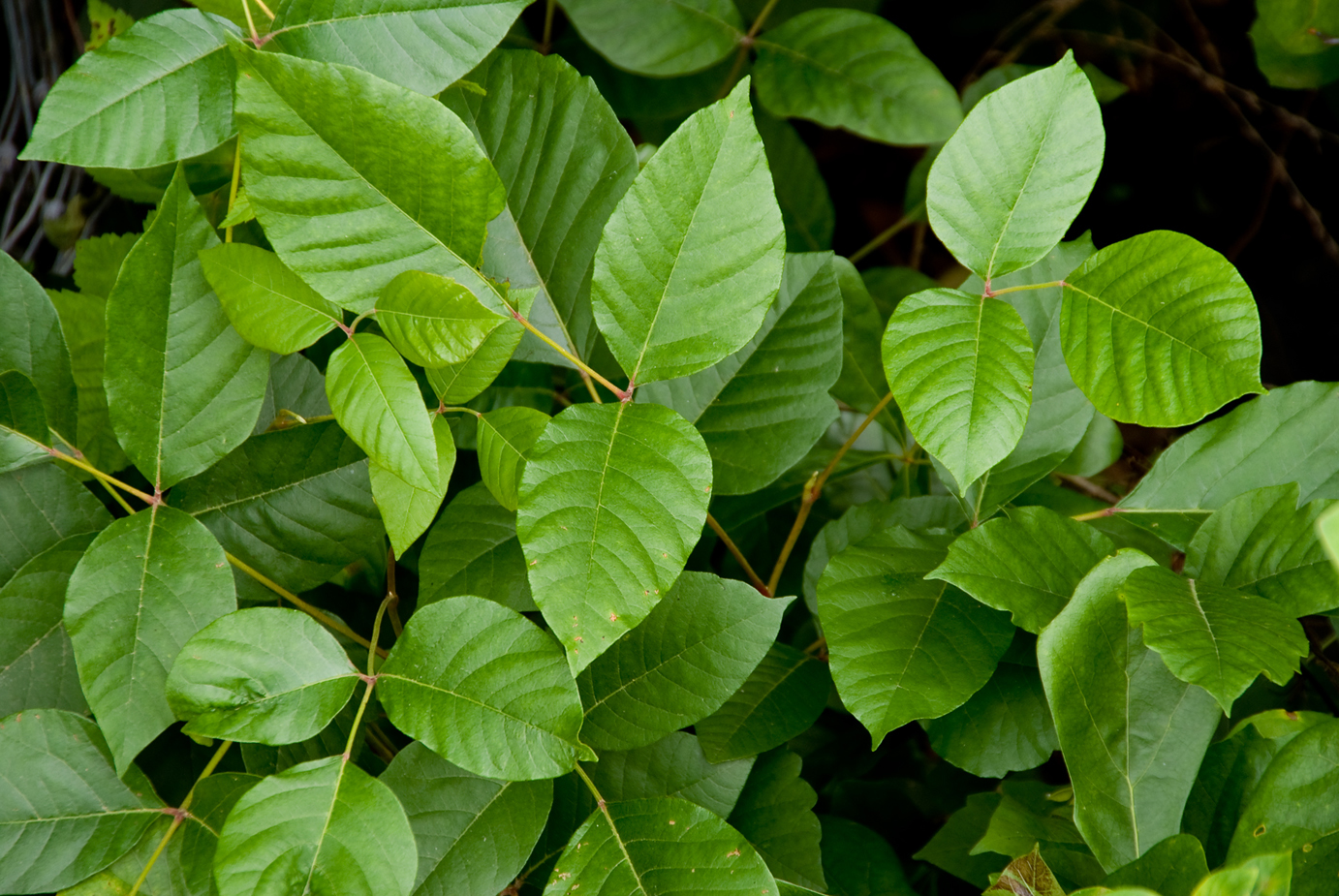 Appearance: Poison ivy grows into shrubs or vines. The shrubs have a unique shape of three leaflets. These leaflets are arranged such that there are two on the either sides and one in the center. They have a tendency to grow up to four feet in height. The bright green plant has shiny glossy leaves that are jagged or serrated at the edges.

The fruit of the poison ivy is referred to as a drupe. It is a cluster or bunch of small round berries. The berries change their color from greenish yellow to white as they mature. This also happens with the change of seasons. However, the berries are extremely small and can go unnoticed, too. The fruits or berries of the poison ivy plant grow from the bunch of its greenish yellow to white flowers. The flowers have a distinct orange spot at the center. This can act as a recognizable feature for the plant.

Color of the plant

Initially, the color of leaves is a characteristic of fall colors as they appear rusty red or orange. However, as the plant grows, the color of the leaves changes from reddish to bright green.

This family of plants has a distinguishing color changing cycle. The bright orange colors are due to the presence of anthocyanin pigments.

Poison sumac tends to grow in a different style as opposed to three leaflet nature of poison ivy. It grows into a tree of a smaller height. The leaves are not arranged in a three-leaf unit system. Instead, they grow into a pair of 10 to 15, or sometimes 8 to 13 leaves. They are usually filled with red colored berry clusters. They also tend to change their color to reddish orange during the fall season, making them extremely pleasing to the eyes.

Vines of poison ivy: Similar to any vine that spreads by catching onto a host for nutrition and support, vines of poison ivy grow on bricks, damp surfaces, walls, trees, and edges of mountainous ranges.

Aerial root system of poison ivy vines: Poison ivies lose most of their leaves during the fall season. The empty surfaces on the stem then appear to have small hair like fine fibers on them. The fine hair like structures stand upright and erect. These are called aerial roots. The purpose of these roots is to get attached to the host surfaces of trees, brick walls, etc.

The infamous plant is known for its allergy causing nature. They are notorious for inducing a quick allergenic response upon touching.

What causes the allergic reaction?

Poison ivies have a resinous compound found in them. It is referred to as urushiol. This compound has a tendency to induce rash, blisters or other allergic reactions on touching any part of the plant, which is called urushiol-induced dermatitis. This compound has following properties:

Effect of urushiol on the skin 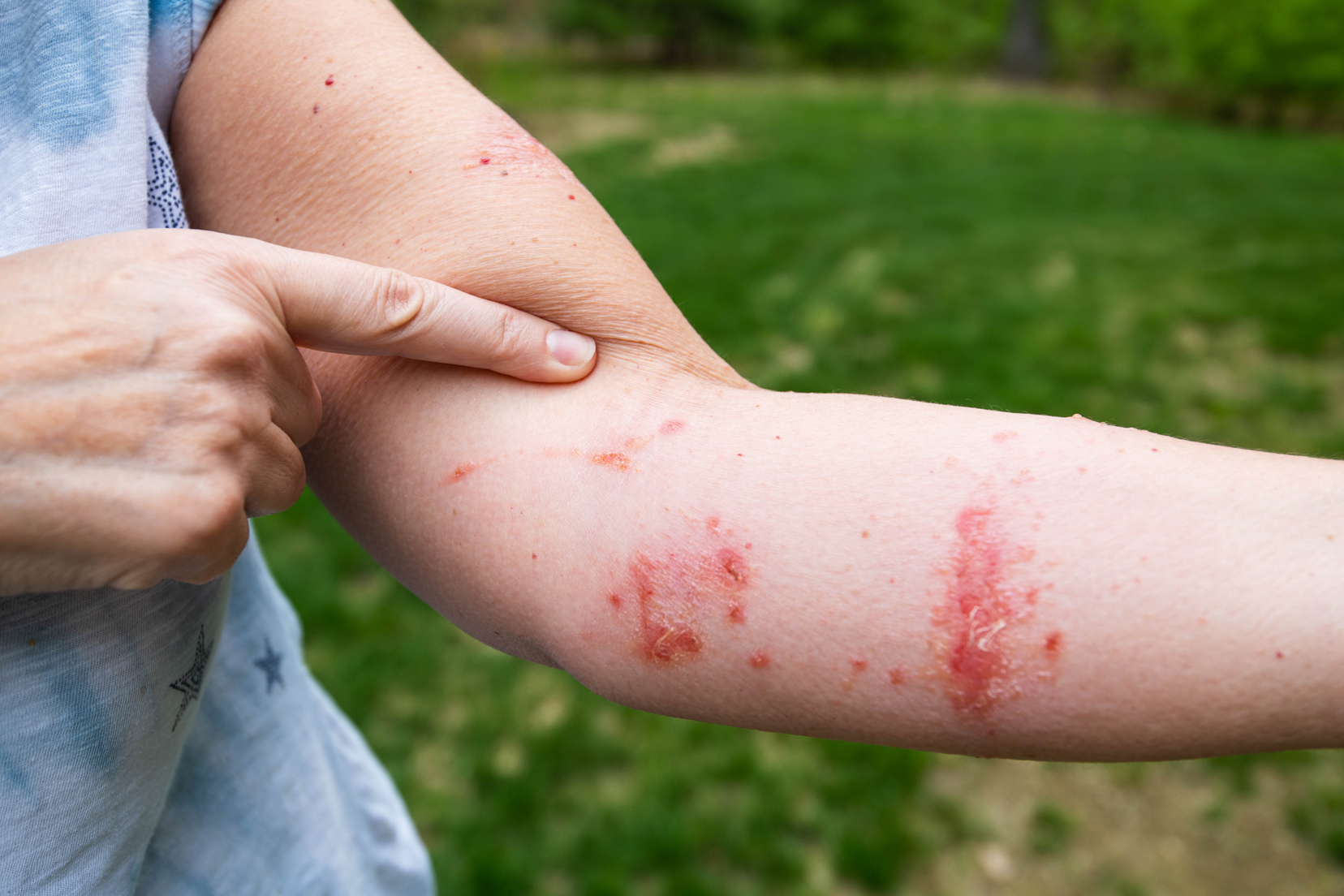 This resinous compound gets attached to the skin with the slightest touch. It is a quickly acting compound, so it is essential to act quickly if you come in contact with poison ivy.

If urushiol comes in contact with the skin, it is important to try to wash it off as soon as possible

within first 10-12 minutes of the initial contact as this compound gets adsorbed rapidly by the skin.

If water is unavailable, using alcohol wipes or antiseptic sanitizers can also help as first aid.

It then enters the circulation where it is detected by the T lymphocytes.

The result of the reaction is redness, blisters, rash and itching on the site of contact.

In some patients the compound can even produce a systemic effect of reduced breathing, shock and even numbness. Localized swelling is also frequently associated with this allergy. Sometimes, the swelling may occur on the whole arm, hand or leg instead of solely on the contact site.

Being a low maintenance plant, Poison Ivy is extremely common in both North and South America, Mexico and the mountains of New England. Other than that, they are also found in forest beds in different parts of world. They are also found on farms and old moist buildings. Due to their propellant nature, cases of poison ivy allergy are extremely common. It is due to their highly toxic nature, that the sites with poison ivy growth have hazard and safety signs.

1. Washing and wiping: Immediately after touching the plant, it is best to wash off the contact site as the resinous urushiol gets adsorbed within a matter of a few minutes. However, using alcohol wipes or washing off with water or alcoholic antiseptic solution can help minimize the effect of the allergy.

2. Apply steroids: It is always a good idea to carry topical steroids in the bag whenever traveling to forests or bushy areas. Corticosteroids help reduce swelling, itching and rash.

3. Apply calamine lotions: Calamine containing lotions are easily available over the counter. These are pinkish solutions which when applied topically can substantially reduce the rash and blisters. They have a tendency to ease the itch and pain by many folds.

4. Cold compress: This is another home remedy for the itch and rash. Poison ivy rash has a strong burning sensation. If children get exposed to it, there is a likelihood of concomitant skin conditions due to its burning like sensations. It is ideal to use cold compress or wash frequently with cold water to help ease the burning pain.

5. Oral anti-allergics: Poison ivy produces a quick allergic response in the body. It is a rapidly worsening condition. Therefore, if a person has been in contact with the plant, it is best to take some oral anti-allergic medicine prophylactically. This is to avoid allergic reaction even before it has started. However, if the allergic reaction on the skin has already started, anti-allergics should still be taken. Their dose should also be so adjusted that the drug is taken on a regular basis for a 5 to 7 days or up until complete healing.

6. Aloe vera gel and soothing agents: the rash, blisters and swelling can get flared up under sun exposure. This causes tremendous amount of pain and itching. Using fresh aloe vera gel can help alleviate the pain and itch within minutes. Loose cotton clothing should be worn and ice should be frequently placed onto the skin.

What are some of oral anti allergic that can be taken?

Diphenhydramine (Benadryl) is a good choice for topical skin allergies. It has a swift onset of action.

Loratadine (Claritin) are non-sedative anti-allergic and be taken during a hike or travel. It will reduce the rash and allergy by many folds.

Healing time for the rash

The usual healing time for any skin rash or swelling is up to 2 to 3 weeks. The duration of poison ivy rash is up to 3 weeks. If anti histamines are taken regularly, and skin medications are applied frequently, then the healing time can be reduced significantly.

The following complications may be expected after a poison ivy allergic condition:

1.Skin breakout: This is especially a major complication among children. Children have a low threshold for itch and pain. Itching can break or tear the skin surface where affected which will cause worsening of the affected skin condition. It is ideal to continuously treat it with cold compress in the case of children.

3. Breathing problems: In some urban areas the poison ivy plant grows very profusely. To get rid of the uninvited plant, people often burn them as a safety measure. However, the soot and smoke from the burning ivy plant can be extremely irritating and dangerous for the lungs. The smoke can irritate the mucosal layer of the trachea and lungs causing difficulty in breathing.

4. Damage to property: The vines of poison ivy grow very swiftly on the brick walls and cement. They can even propel and grow on the wooden walls. Not only do they make the walls toxic too but can also ruin their texture and strength.

Poison ivy allergy: when to see the doctor

Usually, the allergic reaction can be treated by over-the-counter medication and topical medications. However, some severe cases need medical assistance. These include following scenarios:

What are some of the uses of poison ivy?

Although the plant is extremely irritating to the skin, some homeopathic practitioners have employed its use in the treatment of gout, rheumatoid arthritis, menstrual issues, and some skin conditions. However, there is no research or evidence to prove its efficacy. Therefore, application of the plant for home remedies should be avoided.

1. Is poison ivy contagious from person to person?

No, the contagiousness is only dependent on the compound urushiol. If the infected person has been thoroughly cleansed then the rash cannot spread.

2. Can animals get affected by the poison ivy allergen?

No, the fur of animal skin protects them from getting any allergic reaction. However, animals can spread it to humans by the way of the urushiol resin.

Plucking out the plant is the only viable method to get rid of poison ivy. Protective overalls should be worn for this purpose. Burning the plant does not break the urushiol compound as they can stand up to heats of 300° C.

4. How long does it take for poison ivy to become non-allergenic?

It usually takes up to 48 hours for the resin urushiol to become less allergenic or eventually become inactive. Up until then, resin from one part of the body can spread to another while damaging the skin.