So, if cancer starts in the ovaries, then it is called ovarian cancer, which is our topic for this article.

What is Ovarian Cancer?

The ovaries are the sites of egg production in women, they are also the main source of estrogen and progesterone hormones. The eggs produced by the ovaries travel through the fallopian tube to the uterus where they get fertilized and settle in the uterus and form a fetus.

There is an ovary on each side of the uterus and each ovary is mainly made of three types of cells. Each of these types can develop into a different type of cancer. These cells are:

About 85 to 90% of ovarian cancers are epithelial carcinomas. Some ovarian tumors can be benign, which never spread beyond the ovary. Some others are cancerous or malignant, which can spread to other body parts and might be fatal.

So, in essence, ovarian cancer is cancer that starts in the ovaries.

It ranks fifth in cancer deaths among women, accounting for more deaths than any cancers in the female reproductive system.

When ovarian cancer is discovered in its early stages, the treatment works better.

Therefore, it is very  important to pay attention to your body and know what’s normal for you so that when there is something wrong or there are symptoms, you can detect them and pay the doctor a visit as soon as possible.

Very early stages rarely cause any symptoms of ovarian cancer but as the disease advances, non-specific symptoms arise, and they are commonly mistaken for other causes.

Ovarian cancer may cause the following signs and symptoms:

If any of the above mentioned symptoms or signs of ovarian cancer persist for two weeks or longer, immediately arrange a visit to your doctor. If you experience abnormal vaginal bleeding or discharge, call your gynecologist to see what is wrong.

It is not yet clear what causes ovarian cancer. However, researchers have identified some factors that can increase the risk of developing ovarian cancer.

In general, cancer develops when there is a mutation in the cells’ DNA. This mutation tells the cells to grow and divide quickly without stopping and beyond their life span, which eventually leads to the formation of a mass.

Despite all the scientific progress and research, there is no way to tell if you are going to develop ovarian cancer or not. Most women get it without being at high risk. But knowing the risk factors can help doctors identify the high-risk group and prevent the potential for developing ovarian cancer.

Here are the identified risk factors:

If you have one or two of these risk factors, it doesn't mean that you will get ovarian cancer for sure. However, you should speak with your doctor about your risk and how to protect yourself through regular check-ups and screening to detect any abnormality early.

There is no absolute way to stop ovarian cancer or prevent it. But there may be some precautions to reduce the risk of getting it, such as:

These are all factors that can modestly reduce the risk of ovarian cancer.

Ovarian Cancer Screening - What to Know

Unfortunately, there is no simple and reliable way to screen for ovarian cancer in women who don’t have any signs or symptoms.

Screening is a test that is used to detect the disease before there are any signs or symptoms and when the treatment works best.

So, unlike cervix cancer, there is no specific screening test that can detect ovarian cancer before having any symptoms.

And since, in fact, there is a gynecological screening test for cervical cancer only, it is especially important to pay more attention to any warning signs or symptoms. Every woman should pay attention to her body and know what is normal for her and what is not.

However, there are some diagnostic tests. These tests work best when there are symptoms. They either diagnose or eliminate the diagnosis of ovarian cancer.

Tests to diagnose ovarian cancer include:

In this test, the doctor tries to feel any abnormality, masses or tenderness in the pelvis. The doctor inserts gloved fingers into the vagina and simultaneously presses a hand against the abdomen to feel the pelvic organs. The doctor also checks the genitals for any abnormality or discharge.

Tests like ultrasound, CT scan, and MRI can help the doctor to determine the shape, size and surface of the ovaries. They can also show any abnormal mass of the ovary.

Blood tests can include a complete blood count that could detect any inflammation or infection, or it can include organ function tests that provide information about the overall health of the patient. But most importantly, your doctor might ask for a blood test for tumor markers. These are specific substances that are released by tumors. Some tumor markers might indicate ovarian cancer. For example, a cancer antigen 125 test, also called  CA125, is done to detect a protein that is often found on the surface of ovarian cancer cells. This test can’t tell if you already have cancer or not, but it can give your doctor a clue about your diagnosis and prognosis.

Our role today is to answer most of your questions regarding ovarian cancer. Today we have Dr. Lee, who is a leading doctor at Korea University Anam Hospital in Seoul. He is going to discuss ovarian cancer with us from an experienced medical point of view. 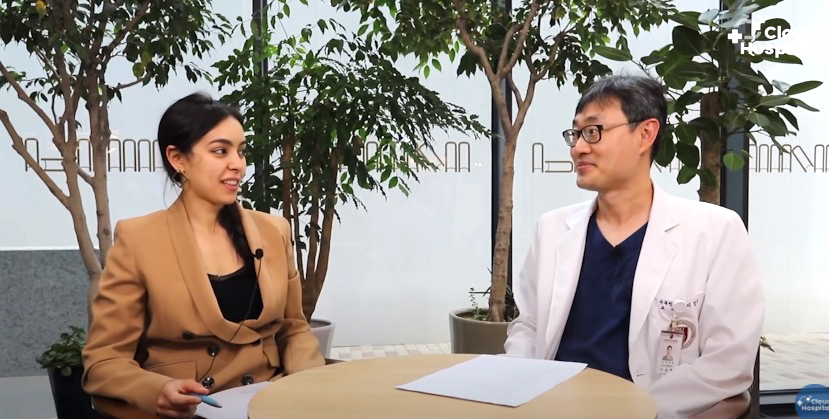 What is ovarian cancer?

Cancer from the ovaries is called ovarian cancer.

Are there any  specific symptoms for ovarian cancer?

Because ovarian cancer has no symptoms, it is difficult for patients to detect it, and as there are no early symptoms either, they usually end up coming to the hospital too late.

This cancer is divided into stage 1, stage 2, stage 3 and stage 4, but most ovarian cancer patients visit the hospital in the late 3rd to 4th stage.

Is ovarian cancer related to age?

Although ovarian cancer is believed to occur a lot in patients in their 50s to 60s, as regular hospital check-ups are done often these days, many young women are also discovering it.

Are benign diseases like fibroids or cysts related to ovarian cancer in any way?

How is it diagnosed?

Ultrasonography is the most commonly used diagnosis.

Secondly, a blood test called a tumor marker, such as a blood test-CA 125 is also used. CT is also taken if necessary.

What are the options out there to treat ovarian cancer?

Treatment is surgery. For ovarian cancer, surgery is the most important treatment. I think it is most important to remove most of the cancer as possible with surgery, and chemotherapy may be given after, if necessary.

After being diagnosed with ovarian cancer, can you get pregnant?

This is actually my major. To have a child after being diagnosed with ovarian cancer, you should do it during the initial diagnosis. Stage 1 can be divided into A, B, C in more detail. Until Stage 1C is discovered, pregnancy can be maintained and this is called fertility preservation. That’s why it’s most important to discover it early on.

Who is more likely to get ovarian cancer? Who is at higher risk?

Some people have genetic factors for ovarian cancer, and some don’t. Those who have it have a gene called DRCA. It is a gene that can occur together with breast cancer or ovarian cancer. So those with the BRCA gene have a higher risk. So, for people who have breast or ovarian cancer running in the family, it is good to have regular tests. It is also necessary to do a genetic test, if needed.

Cancer from the ovaries is called ovarian cancer. Because ovarian cancer has no symptoms, it is difficult for patients to detect it. This cancer is divided into stage 1, stage 2, stage 3 and stage 4. Although ovarian cancer is believed to occur a lot in patients in their 50s to 60s, as regular hospital check-ups are done often these days, many young women are also discovering it. Most benign ovarian cysts and tumors like fibroids and others are said to be unrelated to cancer. Ultrasonography is the most commonly used diagnosis. Secondly, a blood test called a tumor marker, such as a blood test-CA 125 is also used. CT is also taken, if necessary.

For ovarian cancer, surgery is the most important treatment and chemotherapy may be given after, if necessary. Stage 1 can be further divided into A, B, C in more detail. Until Stage 1C is discovered, pregnancy can be maintained, and this is called fertility preservation.

Some people have genetic factors for ovarian cancer. Those who have it have a gene called BRCA. It is a gene that can occur together with breast cancer or ovarian cancer, which can be detected via a genetic test.

In Korea, some say that it should be done every year, or when testing together with the HPV virus, it is done every 3 to 5 years. However, in the US, they advise you to get HPV and pap smears done together every 5 years.

For ovarian cancer, surgery is the most important, and whether in stage 1 or stage 4, it is treated with surgery. Chemotherapy is a supplemental treatment.