What is Anemia fatigue?

Anemia is a health concern in which the body experiences weakness and tiredness. It is due to the lack of adequate red healthy blood cells in the body. Anemia is defined as hemoglobin levels that are less than two standard deviations below the mean for the patient's age and gender. Iron is required for the formation of the hemoglobin molecule. Iron deficiency is the most prevalent cause of anemia worldwide, resulting in microcytic and hypochromic red cells on the peripheral smear.

There are numerous causes of Anemia and its various types. It can be long term or short term and the problem can range from mild to severe. Some people even become anemic due to the onset of any significant ailment.

Iron is required for hemoglobin synthesis. Iron levels may be depleted as a result of blood loss, decreased intake, impaired absorption, or increased demand. Occult gastrointestinal bleeding can cause iron deficiency anemia. Adults over the age of 50 who have iron deficiency anemia and gastrointestinal bleeding should be checked for cancer. However, in one-third of individuals evaluated, gastrointestinal diagnostic assessment fails to identify a reason. On a peripheral blood smear, iron deficiency results in microcytic hypochromic anemia. The American Academy of Pediatrics recommends iron supplementation since it is the most prevalent single nutrient deficit. When to start supplementing and how much to take depends on the child's age and nutrition.

There are several types of Anemia that affects people. They are given below:

The most common cause of anemia worldwide is iron deficiency anemia, which results in microcytic and hypochromic red cells on the peripheral smear. On exercise, the patient frequently complains of nonspecific symptoms such as weariness and dyspnea. Patients with iron deficiency anemia have a lengthier hospital stay as well as a higher number of adverse events.

The etiology of iron deficiency anemia differs according to age, gender, and socioeconomic situation. Inadequate iron intake, poor absorption, or blood loss can all lead to iron insufficiency. Iron deficiency anemia is most commonly caused by blood loss, particularly in elderly people. Low food intake, increased systemic iron needs, such as during pregnancy, and impaired iron absorption, such as in celiac disease, can all cause it.

Breastfeeding protects against iron deficit in neonates owing to the increased bioavailability of iron in breast milk compared to cow's milk; iron deficiency anemia is the most frequent kind of anemia in young children fed cow's milk. A parasite infection is also a major cause of iron deficiency anemia in impoverished nations. Green vegetables, red meat, and iron-fortified milk formulae are all good sources of iron.

The majority of individuals are asymptomatic and are diagnosed by a blood test. The most critical clinical indicator is pallor, however it is typically not noticeable until hemoglobin drops to 7 g/dL to 8 g/dL. A detailed medical history may indicate weariness, diminished job capacity, shortness of breath, or increasing congestive heart failure. Cognitive impairment and developmental delays in children are possible. Patients should be asked about their nutrition as well as any bleeding from menorrhagia or gastrointestinal causes. Pale skin and conjunctiva, resting tachycardia, congestive heart failure, and guaiac-positive stool may be discovered during the physical exam.

Anemia will be discovered by laboratory testing. In iron deficiency, hemoglobin indices will show low mean corpuscular hemoglobin and mean corpuscular hemoglobin volume. Microcytosis, hypochromia, and anisocytosis are revealed by hematoscopy, as evidenced by a red cell distribution width that is greater than the reference range. Ferritin, iron, and transferrin saturation levels in the blood will be reduced. Serum ferritin is a measure of the total iron reserves in the body.

The overall capacity for iron binding will be enhanced. A stool examination for occult blood may uncover a source of bleeding in the gastrointestinal tract. A simple Mentzer index, or mean corpuscular hemoglobin/RBC index, can assist distinguish between the two causes of microcytic/hypochromic anemia. Iron deficiency and thalassemia minor are the two reasons. A score of 15 or above indicates iron deficiency, whereas a score of 11 or below indicates thalassemia mild.

Hemoglobin electrophoresis is the definitive test for ruling out thalassemia minor. Other tests, such as an iron profile, are required for severe anemia or anemia that does not respond to iron treatment. Low ferritin levels are a reliable indicator of iron insufficiency. A ferritin level that is within the reference range or increased, on the other hand, is ineffective in individuals with inflammatory disorders such as cancer, infection, and collagen disease. This is due to the fact that it is an acute-phase reactant.

Because it is unaffected by inflammation, a bone marrow aspiration or biopsy followed by iron staining is the gold standard for determining iron deficiency. However, the expense and invasiveness of this test make it less viable; as a result, it is rarely conducted. 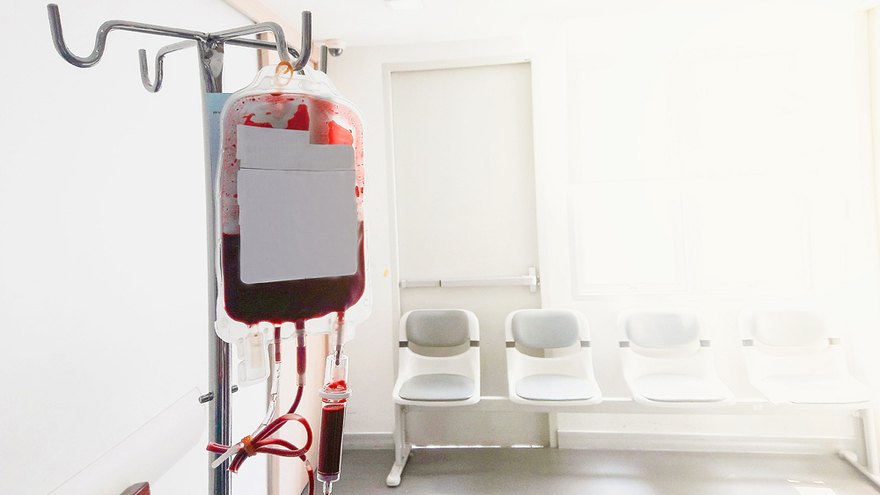 Thalassemias are a diverse set of hereditary illnesses caused by a reduction in the production of hemoglobin's alpha or beta chains (Hb). Hemoglobin is the component of red blood cells that transports oxygen. It is made up of two proteins, an alpha and a beta. If the body does not produce enough of one or both of these proteins, red blood cells may not form correctly and cannot carry enough oxygen, resulting in anemia that begins in childhood and lasts throughout life. Thalassemia is a hereditary condition, which means that at least one of the parents must be a carrier. It is caused by a genetic mutation or the loss of critical gene sequences. 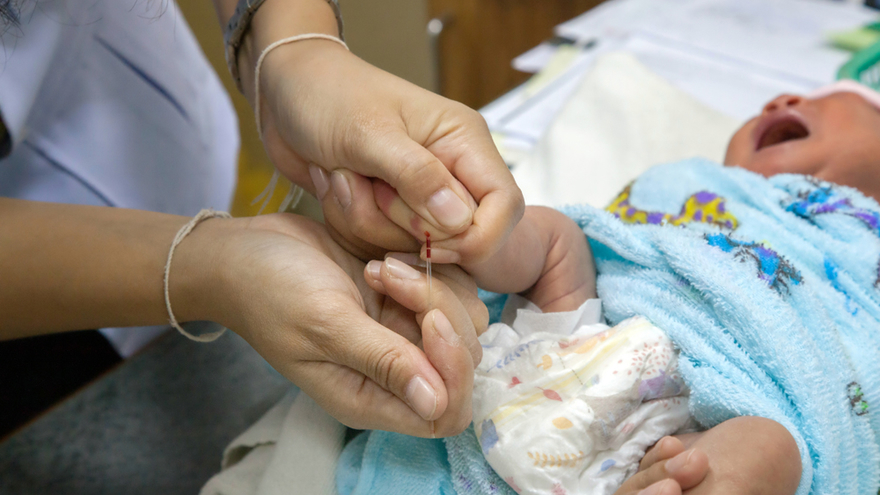 The appearance of thalassemia varies greatly depending on the kind and severity. A thorough history and physical examination might reveal various indicators that are not always evident to the patient. The following findings are worth noting:

Pallor owing to anemia and jaundice due to hyperbilirubinemia caused by intravascular hemolysis can cause pallor and jaundice on the skin. As the initial presenting symptom, patients frequently describe weariness owing to anemia. Ulcerations might be discovered during an examination of the extremities. Bronze skin can occur from chronic iron deposition caused by many transfusions.

Extramedullary hematopoiesis causes malformed facial and other skeletal bones, as well as the chipmunk face look.

Chronic transfusion-induced iron accumulation in cardiac myocytes can disturb heart rhythm, resulting in a variety of arrhythmias. Overt cardiac failure can occur as a result of persistent anemia.

Chronic hyperbilirubinemia can cause bilirubin gall stones to form, resulting in the classic colicky discomfort of cholelithiasis. Chronic iron deposition, as well as extramedullary hematopoiesis in these organs, can cause hepatosplenomegaly. Chronic hemolysis caused by poorly controlled hematopoiesis results in splenic infarcts or autophagy.

Hepatic involvement is widespread in thalassemias, owing to the recurrent requirement for transfusions. Chronic iron deposition or transfusion-related viral hepatitis can cause chronic liver failure or cirrhosis.

Anemia can slow a child's development rate, and thalassemia can cause puberty to be delayed. Particular attention should be paid to the child's age-appropriate growth and development.

Iron excess can cause iron deposition in numerous organ systems of the body, resulting in impaired system function. Iron deposition in the pancreas can result in diabetes mellitus; iron deposition in the thyroid or parathyroid glands can result in hypothyroidism and hypoparathyroidism, respectively. Chronic arthropathies result from deposits in joints. Iron preferentially accumulates in the substantia nigra of the brain, manifesting as early-onset Parkinson's disease and other physiatry issues. These symptoms belong to the large realm of hemochromatosis. 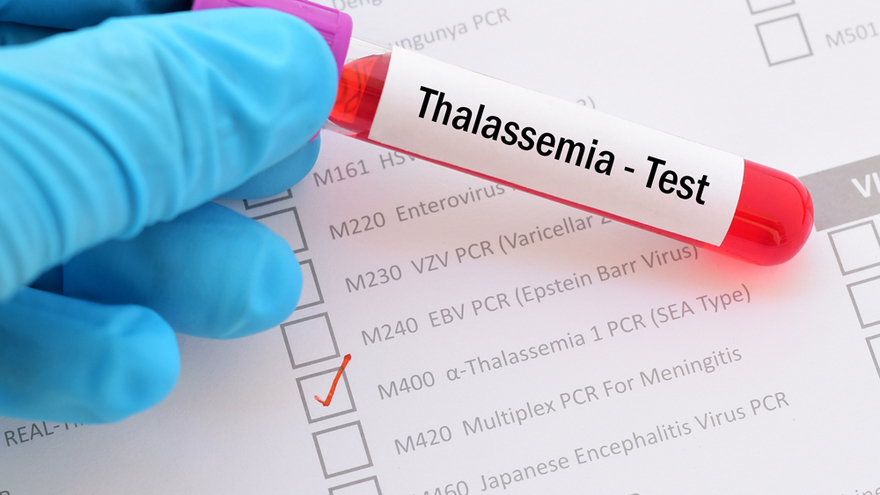 Several laboratory tests have been developed to screen and diagnose thalassemia:

A blood smear (also known as a peripheral smear or a manual differential) is performed next to evaluate further red cell qualities. Thalassemia can be identified on a peripheral blood smear by the following findings:

The equilibrium of beta and alpha hemoglobin chain production is disrupted by beta thalassemia. Patients with beta-thalassemia have higher percentages of HbF and HbA2 and no or extremely low HbA. Beta-thalassemia minor is characterized by a moderate increase in HbA2 and a mild reduction in HbA. HbH is a less frequent type of hemoglobin seen in some instances of alpha thalassemia. HbS is the hemoglobin found in sickle cell disease patients.

Hemoglobinopathy (Hb) testing is used for prenatal screening when parents are at high risk for hemoglobin abnormalities, as well as for state-mandated newborn hemoglobin testing.

These tests are used to assist confirm mutations in the genes that produce alpha and beta globin. Although DNA testing is not standard, it can be used to assist diagnose thalassemia and identify carrier status if necessary.

Because having relatives with thalassemia mutations enhances a person's chances of carrying the same mutant gene, family investigations may be required to determine carrier status and the sorts of mutations present in other family members.

It is important in the rare case where a fetus is at elevated risk for thalassemia. This is especially crucial if both parents have a mutation since it raises the likelihood that their kid would inherit a combination of faulty genes, resulting in a more severe type of thalassemia. In high-risk families, prenatal diagnosis with chorionic villi sample at 8 to 10 weeks or amniocentesis at 14 to 20 weeks' gestation can be performed.

Because of their frequent participation in illness development, all associated systems should be evaluated on a regular basis. Depending on the clinical suspicion and case description, biliary tract and gall bladder imaging, abdominal ultrasonography, cardiac MRI, and serum hormone measures are just a few examples of tests that can be performed or repeated.

Other causes of anemia

What are the Symptoms of Anemia? 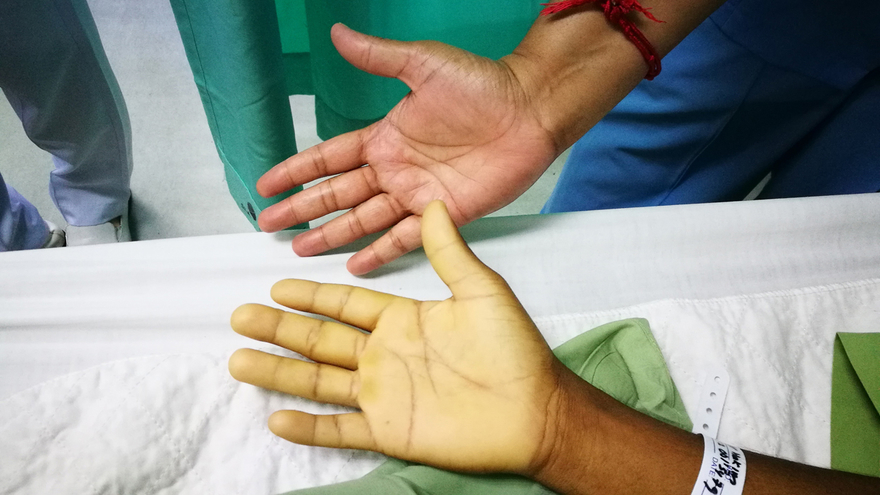 There are different signs and symptoms based on the types of Anemia. The symptom of mild Anemia is almost untraceable, but the symptoms become prominent when the anemia becomes worse. Some common symptoms are:

How is Anemia Diagnosed? 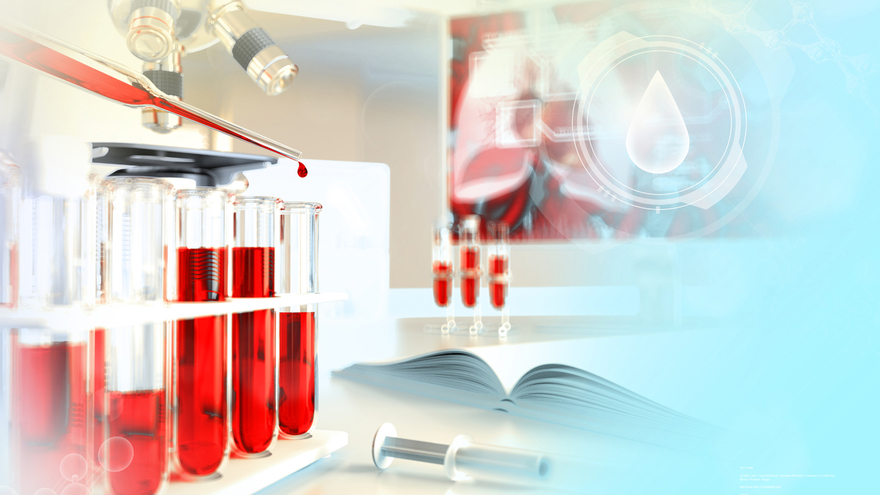 For the diagnosis of numerous types of Anemia, your doctor may examine your family history, do a physical examination, and advise the following tests:

What is the Treatment for Anemia? 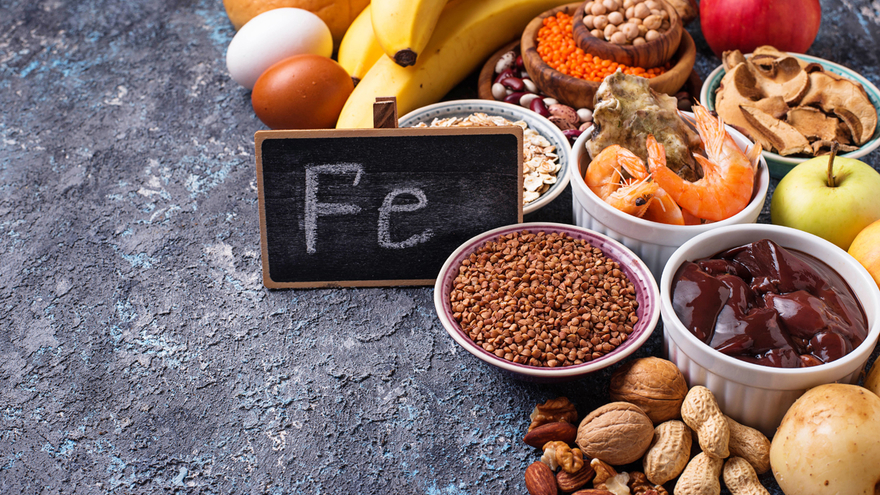 There are various treatments available for Anemia, depending on the cause. Some are given below:

When to See a Doctor?

If you are getting tired quickly or have fatigue without any exertion, these might be symptoms of Anemia. Also, if your blood test displays low hemoglobin; it is advisable to see a doctor.

Anemia is a prevalent health issue in people, and proper treatment can cure it. The treatment for this health condition includes the use of supplements, or even undergoing specific medical procedures as per the severity of the health condition of the patient. People can also prevent the occurrence of certain types of Anemia by eating a balanced and nutritious diet.