What is AV fistula? Why it is done? 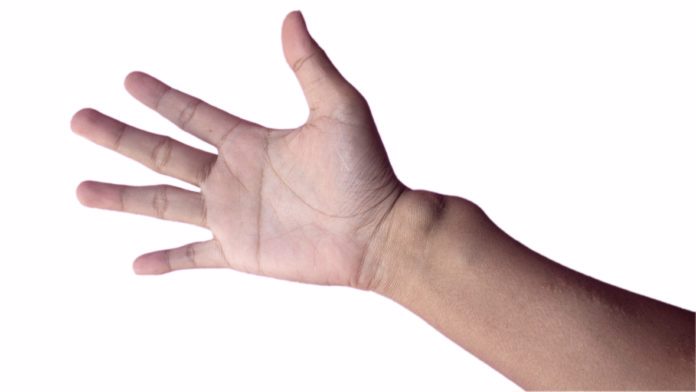 An AV fistula, also known as an arterial fistula, is a condition in which arteries and veins are abnormally connected to each other. Normally, blood flows from your artery to your capillaries and then to your veins. With an arterial fistula, blood flows directly from the artery into a vein across some capillaries. When this happens, the tissue below the bypass capillaries receives less blood. This condition usually occurs in the legs. But it can develop in any part of the body. It is sometimes created surgically for the treatment of other conditions.

What is an AV fistula?

AVFs (arterial-venous fistulas) are aberrant connections between arteries and veins. These are also known as arteriovenous malformations in some situations. Depending on the etiology, AVFs can be found practically anywhere in the body. These can be classified as either acquired or congenital. Fistulas can be surgically established, such as for hemodialysis, or acquired subsequent to trauma, whether accidental or procedure-related.

The anatomy of a fistula varies depending on where it is located in the body. AVFs for hemodialysis are frequently constructed in the extremities, with vascular surgeons preferring the upper extremity over the lower extremity. The cephalic and basilic veins are frequently utilized to create an AVF surgically. Although the radio-cephalic AVF is the recommended initial access for hemodialysis, the radial artery at the volar wrist and the brachial artery at the antecubital fossa and medial upper arm are common anatomical sites for fistula development.

In the literature, two forms of lower extremity surgical AVFs for hemodialysis have been reported. An SFV transposition occurs when the superficial femoral vein, also known as the popliteal vein, is mobilized from the knee to anastomose with the superficial femoral artery. The saphenous vein can be utilized to anastomose with the common femoral artery to form a loop AVF on the anterior thigh.

Although there are no prevalent types of congenital AV fistulas, pulmonary, aortocaval, dural, carotid-cavernous, coronary, and hepatic AVFs have been recorded. While the majority of neck fistulas are caused by trauma, congenital vertebrovertebral fistulas and carotid-jugular fistulas in children have been reported.

Surgical operations, invasive line installation, or needle biopsy are common causes of AVFs as a result of iatrogenic damage. Multiple examples of iatrogenic damage years after surgical operations have been found in the literature. Traumatic AVF can develop almost everywhere there has been trauma, and it can even show late. AVFs in the lower extremities account for more than half of all traumatic AVFs, with one-third occurring in the femoral vessels and 15% in the popliteal vessels.

William Hunter was the first to describe arteriovenous fistulas in 1757. Traumatic injuries from the Second World War, the Korean War, and the Vietnam War provided most of the experience in handling AVFs. During the Korean War, 215 AVFs and aneurysms were documented. Unlike the military, where the majority of traumatic AVFs occur in the extremities, traumatic AVFs of the abdomen and extremities are evenly distributed in the civilian population.

This disparity is most likely due to the military's use of body armor. Traumatic fistulas are demonstrably more prevalent than congenital fistulas, and thus are mentioned more frequently.

According to the National Institute of Diabetes and Digestive and Kidney Diseases, approximately 468,000 people were on hemodialysis in 2013. A surgically constructed AVF provides dialysis to 20% of those patients. AVF incidence differed between dialysis sites in the HEMO Study, which was published in 2000. Females, blacks, obese, elderly, and patients with peripheral artery disease had lower rates of AVF than those who had other types of hemodialysis. The rate of AVF development varies substantially across the United States, with the greatest rates in the Northeast and the lowest in the Southwest.

What are the causes of AV fistula? 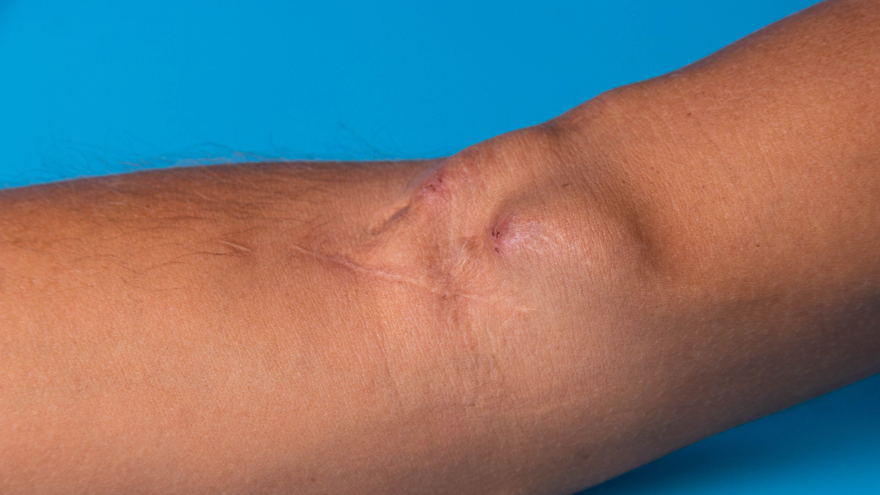 Arteriovenous fistulas can be constructed surgically for hemodialysis access, develop as a consequence of a congenital defect, or develop as a result of iatrogenic damage or trauma. Penetration of any mixed-type vasculature can lead to artery and vein healing simultaneously, bypassing the arteriole and capillary systems downstream.

An AV fist can be caused by:

What are the symptoms of AV fistula? 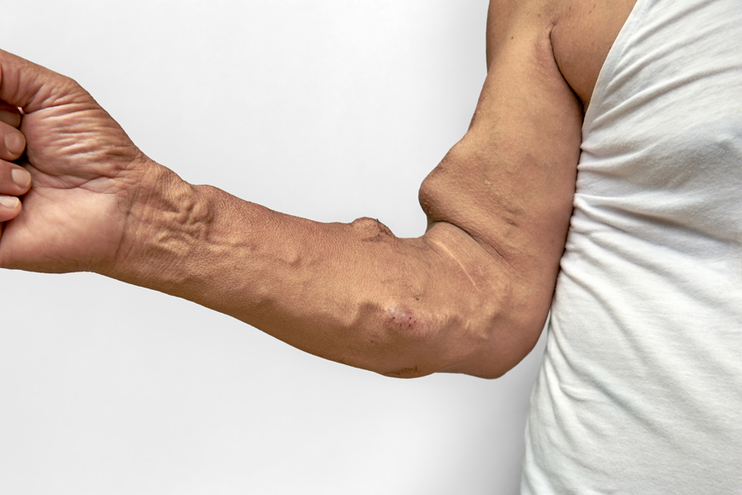 Arteriovenous fistulas can show in a variety of ways, depending on their location and cause. A surgical incision on the lateral wrist, volar forearm, or upper arm will be present in patients having an AVF for hemodialysis. The exhilaration of a functional AVF is real, and the noise is constant. A pulsatile fistula or prolonged bleeding from a hemodialysis puncture site may be seen in a patient with an AVF with an outflow blockage. A tangible thrill, a bruit, or even a pulsatile mass can be felt in superficial fistulas. Over the fistula, you might be able to hear a machinery-like murmur.

Small AV fistulas in your limbs, brain, lungs, or kidneys are usually asymptomatic and rarely require any treatment. However, large fistulas cause visible signs and symptoms. They include:

A large AV fist located in your lungs, known as a pulmonary artery fistula, is a critical condition. Symptoms of this condition are:

Patients with severe, chronic, or high flow fistulas might develop high output cardiac failure, resulting in oxygenated blood shunting back to the right heart. The arterial blood travels a shorter route via the venous system, resulting in lower peripheral resistance. The total circulating blood volume is raised to maintain blood pressure, which leads to heart failure.

A pink stain, a lump, dilated veins, uneven limb size, or skin ulceration are all signs of cutaneous AVFs. Patients may have heaviness in their limbs, which worsens with reliance and improves with elevation. Almost half of the patients are in discomfort. Ischemic tissues or a compressive impact on neighboring nerves might produce discomfort. Glomuvenous malformations, for example, might be painful.

An increase in the size of the limb, swelling, discolouration, or conspicuous vessels with a murmur or palpable thrill may be seen on examination. Pulsatile lesions are also possible. Hyperhidrosis, hyperthermia, hypertrichosis, or a bruit may occur over the lesion. Mass effect or necrosis from chronic tissue ischemia can cause functional impairment in limbs and joints.

Hematemesis, hematuria, hemoptysis, and melena are all symptoms of visceral AVFs. Patients may first appear with heart failure, especially if the fistula is between two extremely big arteries and veins.

How is an AV fistula diagnosed? 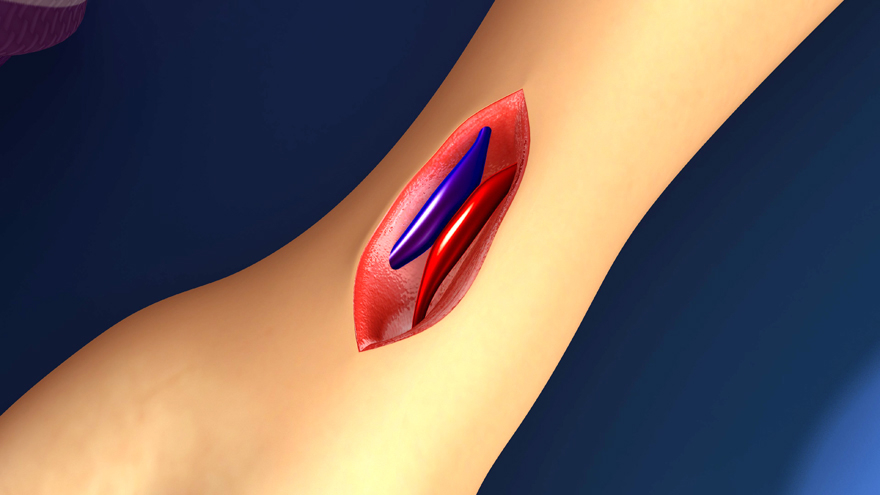 A duplex ultrasound (US) is a non-invasive and economical technique to confirm the diagnosis of AVF, providing that the AVF is superficial, in addition to the clinical assessment from history and physical examination. The feeding artery will show low resistance flow on a duplex ultrasound. Turbulence and high-velocity flow can be seen at the anastomosis or fistula.

The AVF's dilated draining veins or venous plexus will have thickened walls and high-velocity flow. An ultrasound check may also reveal a pseudoaneurysm, venous aneurysm, or dilated feeding artery.

Early contrast filling in the arterial phase of the affected vein can be seen on computed tomography angiography (CTA) and magnetic resonance angiography (MRA). MRA may not be an option in trauma or post-trauma patients because to residual metal, but CTA is a trustworthy, non-invasive, and accessible first diagnostic test. Streak artifact from metallic items (which might be a concern in penetrating injuries), motion artifact, and dependency on contrast timing in the fistula are all disadvantages of CTA.

The gold standard is selective angiography, which has demonstrated to be more accurate than CTA. It is the most intrusive test for an AVF, yet it pinpoints the precise spot of arteriovenous communication, including vascular architecture, flow dynamics, and treatment mechanisms. The downsides of angiography include cost, procedure delay, extra arterial or venous access, and the requirement for a highly trained staff.

Patients who require vascular access for ESRD must be examined to determine the best location for an AVF. Given the predilection of the upper extremity, non-dominant over dominant, forearm over upper arm, all patients, even those coming for assessment of an existing AVF, should have a duplex ultrasound scan. For best outcomes and primary patency rates, criteria have been created. In early attempts to establish AVFs, clinical examination, in addition to vein mapping, has been proven to reduce primary failure rates and unfavorable surgical exploration.

In an AVF, blood gas measurement reveals that the venous side of the blood distal to the fistula has a greater oxygen concentration than normal venous blood. Hemodynamics can be assessed with a flow-directed balloon catheter (Swan-Ganz catheter), which reveals higher cardiac output and lower peripheral vascular resistance. Due of continual turbulence and platelet entrapment, extremely large AVFs can cause thrombocytopenia.

How is the AV fistula treated? 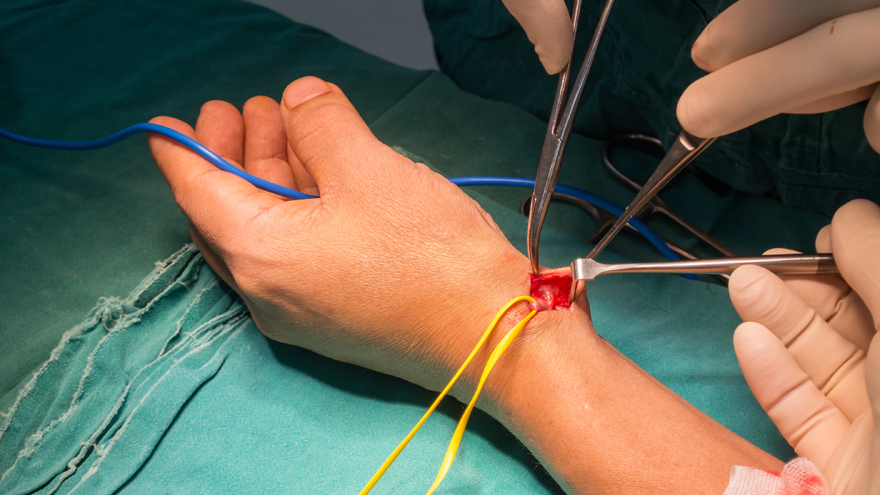 In the past, most occurrences of arteriovenous fistulas were treated conservatively during wartime and then surgically if necessary. Early management, on the other hand, may help to prevent problems from AVFs, and post-traumatic fistulas should be closed as soon as feasible after diagnosis. The objective of AVF therapy is to isolate and seal the fistula while trying to keep vital blood flow going. Direct primary repair, reconstruction (autogenous or prosthetic graft, or bypass), or endovascular repair are all treatment options.

Fistulas that have been present for a long time and are causing problems must be attended to immediately.

When will AV fistula be prosthetic?

Sometimes, AV fistula is placed into your body surgically to treat kidney failure in a procedure called hemodialysis.

Hemodialysis is a procedure that uses a machine to deliver your blood through an out-of-body dialysis machine. Fistula reconstruction surgery may be used to remove and restore your blood during the procedure. Inside the dialysis machine, waste and extra fluid in the blood are removed through a thin filtered fiber. The filtered blood is brought back to the body through another tube. The AV fist allows large amounts of blood to flow continuously. to filter as much blood as possible An AV fist should be created before the first treatment.

The AV fist is usually in the arm or upper arm. This provides reliable access to blood vessels. Without this access, dialysis would be impossible. When the session begins, two needles are inserted into the fistula, one directs blood from the body to the dialyzer, while the other carries filtered blood back to the body.

AV fistula is recommended over other types of access because it:

If you do not have veins of sufficient size for an AV fistula, an artificial vein may be installed through an AV bypass graft surgery. long term solution

The Schobinger Classification is a clinical staging system that serves to predict the success of treatment.

When should you consult a doctor? 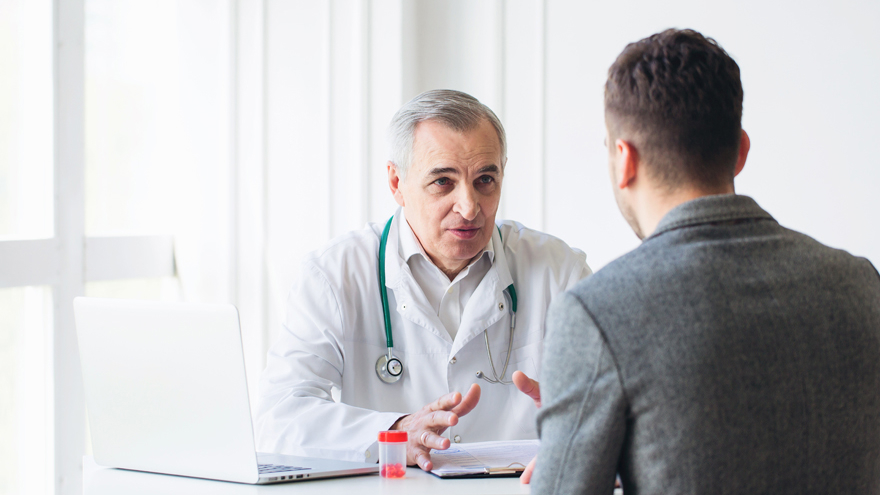 If you have the slightest suspicion of having an AV fistula, especially after noticing symptoms specific to this condition, see your doctor right away. Early diagnosis and treatment can aid recovery without any serious complications.

There are three types of AV fistulas for dialysis:

Some of the risk factors for AV fistulas are:

For more information see: What is BMI and what does a BMI calculator do?

Arteriovenous fistulas (AVFs) are aberrant arteries and vein connections. AVFs can be established surgically, develop as a consequence of a congenital or genetic defect, or develop as a result of iatrogenic damage or trauma. Other than medically induced fistulas, they are extremely uncommon. The pressure differential between the arterial and venous systems can create major pathologic consequences on the body, the severity of which varies depending on where the fistula is located.

Untreated AV fistulas can cause serious problems. Seek immediate medical help and treat yourself from this condition as soon as possible. If you are having AV fistula placement surgery, your doctor will check it regularly.