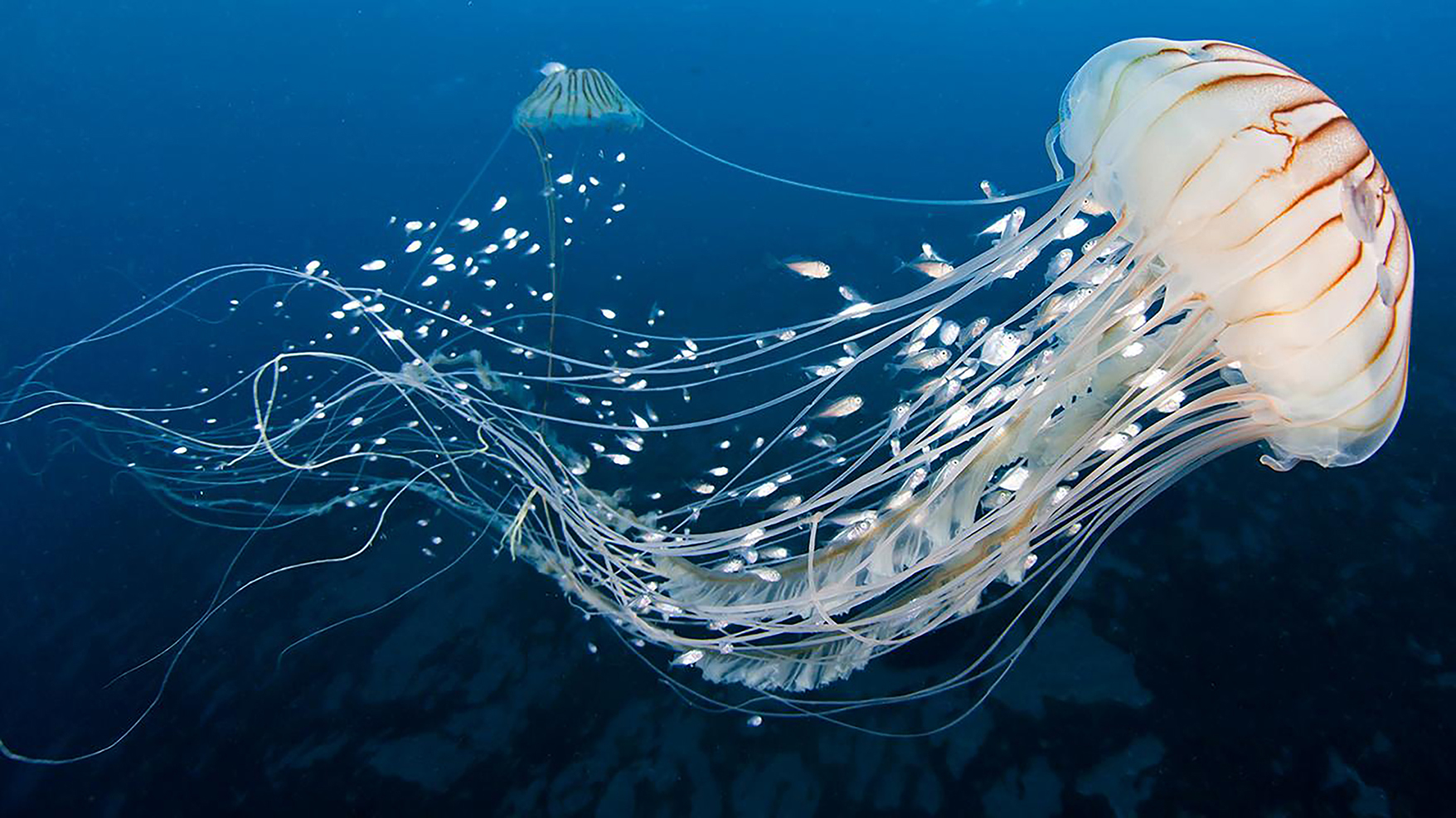 Ask anybody what their ultimate idea of the perfect holiday getaway is, and 9 times out of 10 they’ll tell you it involves them laying on a beach in the sunshine somewhere, cooling off now and then by taking a dip in the sea.

The sea may be beautiful to look at, and a great way to cool off after sunbathing, but she can also be a cruel mistress, hiding a variety of creatures that would do you harm if given half the chance.

If you do decide to go for a dip in the sea, beware of jellyfish as a jellyfish sting is not to be taken lightly.

There are a variety of different jellyfish out there, and while many of their stings don’t actually put your life in danger, the pain can still be excruciating and difficult to treat, which is where we come into the mix.

Ever wondered what to do when stung by jellyfish? Well, wonder no more because here is a guide on jellyfish and what to do if you are stung by one.

The sea is home to a whole variety of weird and wonderful creatures, with some of the most fascinating and popular creatures being jellyfish.

Jellyfish get their name because they’re kind of like fish, but with jelly bodies. These free-swimming, soft-bodied creatures basically look like an umbrella made of jelly, with trailing tentacles.

These tentacles may look amusing, but they are in fact covered with thousands of tiny sacks called Nematocysts which are loaded full of powerful venom. This is their natural defence mechanism against predators and threats, and if you find yourself on the receiving end of one of these tentacle stings, you’ll really know about it, and not in a good way.

Jellyfish are thought to be the oldest multi-organed animal species on the planet, as they can be traced back more than 500 million years.

Most jellyfish stings will simply be very painful, though some can be fatal, so avoiding these stings is always the best method of defence. If you are unfortunate enough to be on the receiving end of a jellyfish sting, though, knowing how to treat it is vital.

Do all jellyfish need to be avoided? 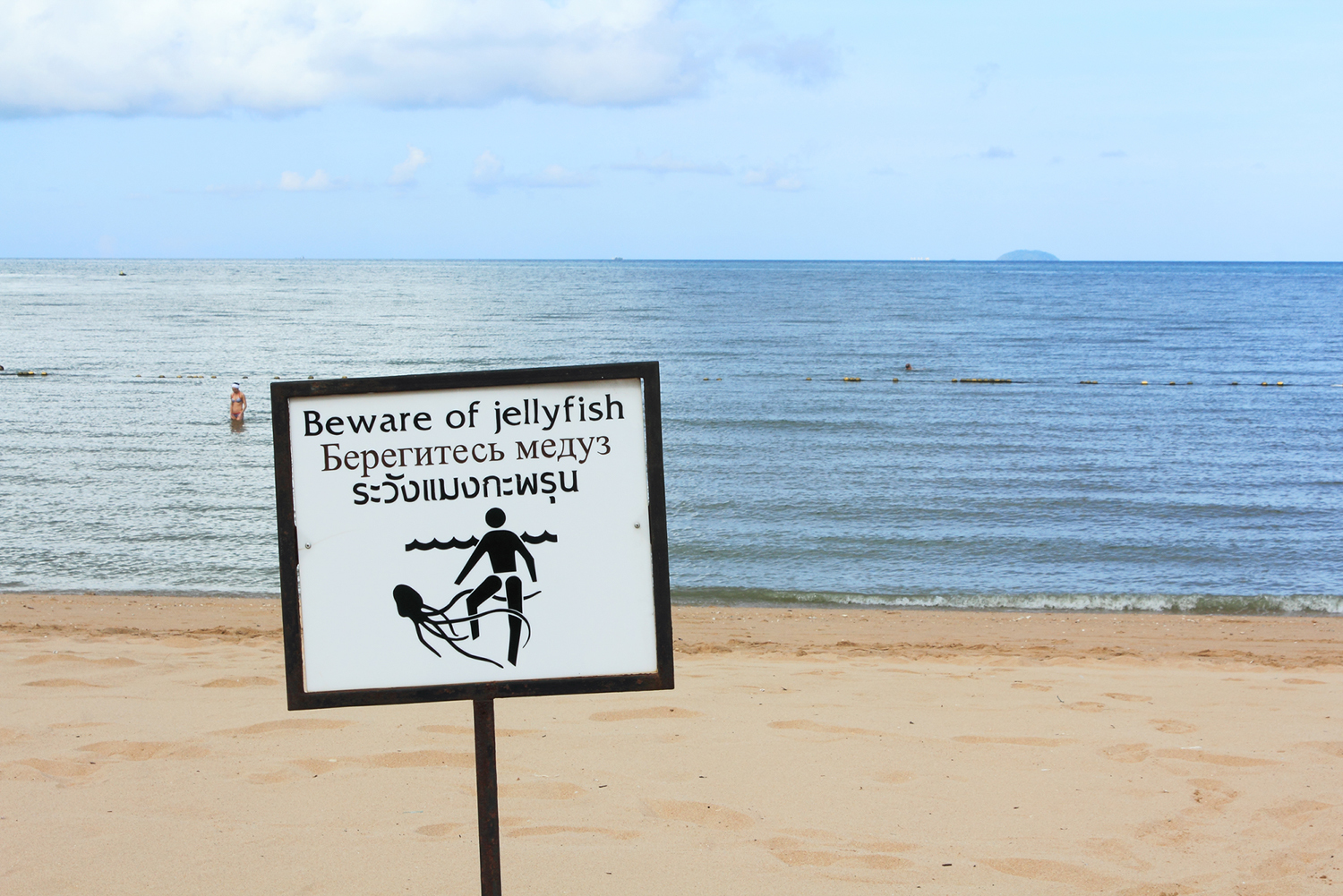 Contrary to popular belief, not all Jellyfish need to be avoided because not all jellyfish can sting you.

There are currently over 2,000 different species of jellyfish in the oceans and of those, only a handful of jellyfish produce venom that is strong and potent enough to be life threatening.

It is worth noting however, that because so much of the ocean has yet to be explored, there could be thousands, if not hundreds of thousands, of jellyfish species which have yet to be discovered, so who knows just how venomous they could potentially be.

More often than not, when people are stung by jellyfish it’s when they wade into them in shallow sea water, or accidentally pick them up or walk on them when paddling. Swimmers and surfers are obviously at risk of suffering a jellyfish sting, although in all honesty anybody in the sea could potentially be stung by a jellyfish at any given time.

Just how painful are jellyfish stings?

As mentioned previously, not all jellyfish can sting you, but out of those that can, the stings can vary hugely depending on the species of the jellyfish in question. We’ll be looking at some of the most venomous jellyfish species a little later on, but for now, let’s take a look at exactly just how painful jellyfish stings are.

Different species of jellyfish have different lengths of tentacles, they come in different sizes, and they can provide different types of sting.

If you experience a jellyfish sting, typically you’ll find that you feel as if you’ve been stabbed by a burning needle. This will usually result in generalized and sometimes localized irritation and inflammation causing itching, swelling, and pain. The pain experienced will depend on the individual’s pain tolerance, and of course, the species of the jellyfish.

Sometimes it will simply sting, whereas other times the main will be so severe that medical treatment will be sought out. People sometimes find that they experience nausea and vomiting, and experience muscle spasms and contractions.

Although rare, it is also vitally important that you keep an eye out for signs and symptoms of an allergic reaction to a jellyfish sting, as this could potentially be fatal. Allergic reactions to jellyfish stings can result in anaphylaxis, chest tightness, difficulty breathing, an elevated pulse, and severe swelling and inflammation.

In the event of an allergic reaction to a jellyfish sting, urgent medical treatment should instantly be sought out.

3 of the most venomous jellyfish in the world

As mentioned, there are thousands of jellyfish species that we know of, and potentially hundreds of thousands which are just waiting to be discovered.

Out of those thousands, only a select few are very venomous, which is what we’re going to be looking at right now.

In no particular order, here’s a look at the most venomous jellyfish on the planet.

The first jellyfish which we’re looking at today is considered by many to be the most poisonous and deadly jellyfish in the world.

The sea wasp box jellyfish isn’t just the most deadly jellyfish in the ocean, it turns out that it is one of the most deadly creatures in the world. Also known as the Marine Stinger, in less than one century, upwards of 5,568 deaths have been recorded as a result of this jellyfish’s sting.

One reason why this jellyfish is so deadly is the fact that it is transparent so it is very difficult to spot in the water. These jellyfish have 15 tentacles which extend more than 10-feet, and are equipped with roughly 500,000 poisonous darts on each tentacle.

The pain from this sting is so extreme that people have been known to die from the pain alone, before the venom even has chance to set in.

Whereas the sea wasp jellyfish is pretty large, the next jellyfish on our list today is the exact opposite.

The Irukandji jellyfish is tiny, and when we say tiny, we really mean it. This jellyfish is just 0.2 inches in length, and is virtually transparent, just like the sea wasp. It too, is a member of the box jellyfish family and it is highly toxic.

The venom this jellyfish produces is more than 100 times more extreme than that of a cobra. One single sting from this tiny creature can cause incredible pain, but multiple stings will almost certainly be deadly.

This next jellyfish probably has one of the coolest names in existence, but don’t let the fun name fool you, because this jellyfish is as deadly as it is beautiful to look at.

The Portuguese Man O’ War jellyfish isn’t technically a jellyfish at all, but rather something called a bluebottle.

These jellyfish have a transparent balloon “body” with brilliant blue and purple tentacles that trail behind them. They may look great, but if you’re stung by one you will experience large red welts, extreme burning and pain in general, and inflammation that will be with you for days afterwards.

What to do when stung by jellyfish? 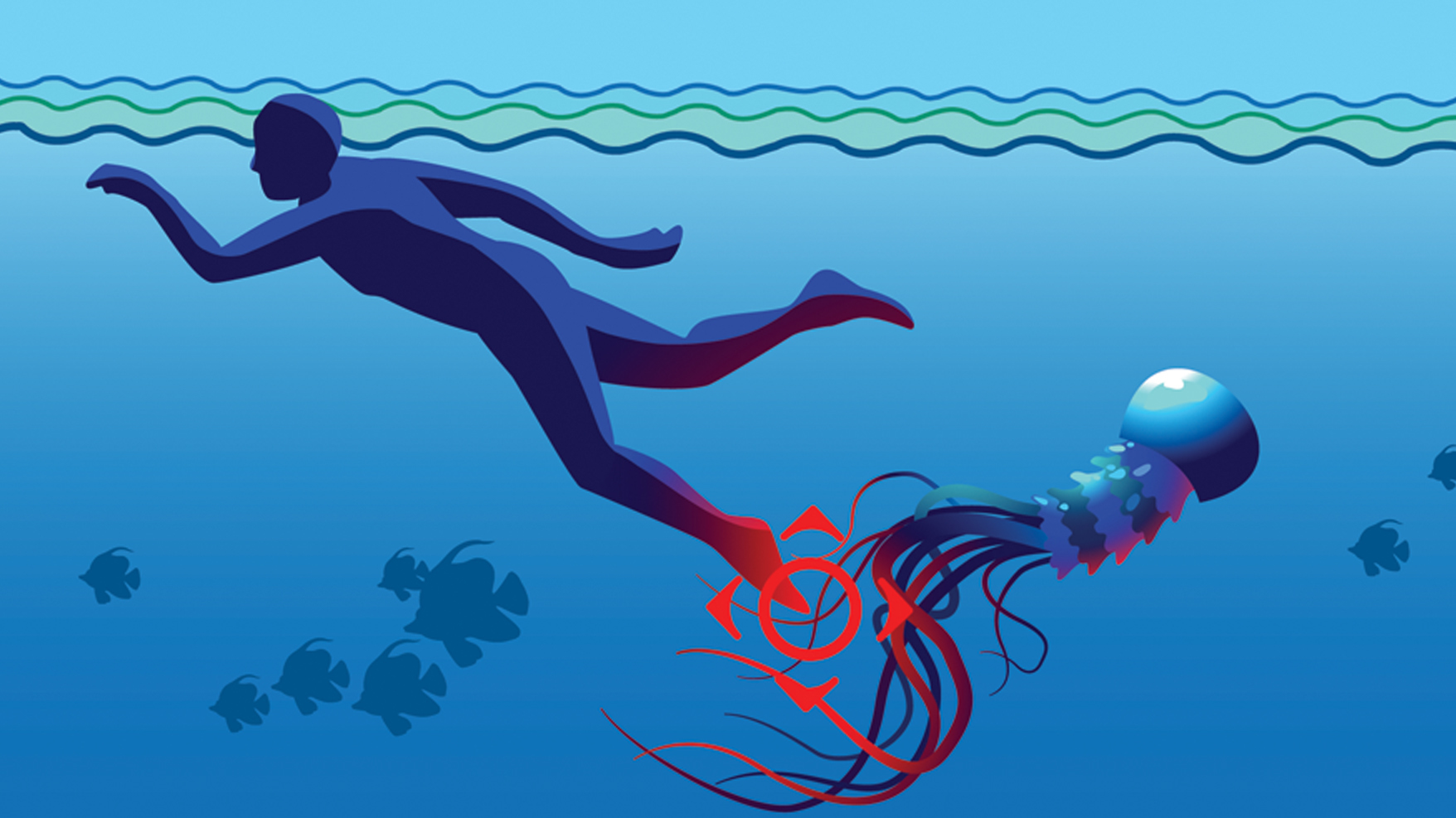 Right, so, we’ve looked at what these weird and deadly creatures are, and we know the top 3 to avoid, but what should you do when stung by a jellyfish?

A common misconception, thanks largely to the hit TV show FRIENDS, is that urinating on a jellyfish sting will help to neutralize the venom and ease the pain. This, however, is a myth. If for example, your urine is particularly alkaline, the stingers in your skin will release more venom and you’ll be in even more pain.

A few ways to treat a jellyfish sting include:

Rinse off in seawater

More often than not, when somebody is stung by a jellyfish, they’ll frantically make their way to shore and will try to get out of the sea as soon as possible.

In reality, thanks to the natural salt content, seawater is very sterile and is great for treating jellyfish stings.

Never use fresh water as this can actually increase the amount of venom produced by the stingers in your skin.

Remove any remaining tentacles with gloves

Like a bee or wasp sting, the best way to treat a sting is to remove any stingers in your skin. Using gloves to protect your hands, remove the stingers/tentacles from your skin.

Over-the-counter medicines can be great for providing near instant relief from jellyfish stings.

Topical painkillers applied to the skin will quickly get to work on helping to neutralize the venom and ease any pain or inflammation.

If you are stung by a jellyfish and you experience a great deal of pain and discomfort, it’s worth seeking medical treatment from experts.

They can look over the injury for you, treat it as necessary, and prescribe any drugs, medicines, or treatments to help speed up your recovery.