What is Aortic Dissection?

Acute aortic dissection (AAD) is an uncommon but deadly condition. Aorta dissection is caused by the separation of the aortic wall's layers. A rupture in the intimal layer causes the dissection to advance (either proximal or retrogradely), owing to blood penetration between the intima and media. Aortic dissection is linked with a very high mortality rate; the majority of patients die before reaching the emergency department. Patients with a chronic aortic dissection (one that has been present for more than two weeks) had a somewhat better prognosis.

Acute aortic dissection (within 2 weeks) is associated with significant morbidity and death. The first 7 days have the greatest mortality rate; in fact, many patients die before they report to the emergency department (ED) or before a diagnosis is made in the ED. Patients with chronic aortic dissection (lasting more than two weeks) had a better prognosis. Despite advances in diagnostic and treatment techniques, the death rate linked with aortic dissection remains significant.

The aorta is made up of three sections: intima, media, and adventitia. The innermost layer, the intima, is thin and sensitive, lined with endothelium, and readily injured.

The adventitia is the aorta's outermost layer. This is mostly made up of collagen. The adventitia contains the vasa vasorum, which feeds blood to the outside portion of the aortic wall. The nervi vascularis, which are bundles of nerve fibers present in the aortic adventitia, is implicated in the creation of pain when the aorta wall is acutely stretched due to dissection. There is no serosal layer in the aorta.

In diastole, the aorta is critical to the forward circulation of blood. The aorta is dilated by blood coming from the left ventricle during left ventricular contraction, and kinetic energy from the ventricle is converted into potential energy stored in the aortic wall. This potential energy is transformed to kinetic energy during aortic wall recoil, moving the blood within the aorta to the peripheral vasculature.

The systolic pressures inside the aorta are determined by the amount of blood expelled into the aorta, the aorta's compliance, and resistance to blood flow. Resistance is mostly caused by the tone of the peripheral arteries, with a little contribution from the inertia produced by the blood column during ventricular systole.

The elasticity and distensibility of the aorta decrease with age, causing the rise in pulse pressure seen in the elderly. Hypertension, coronary artery disease, and hypercholesterolemia all hasten the course of this process. 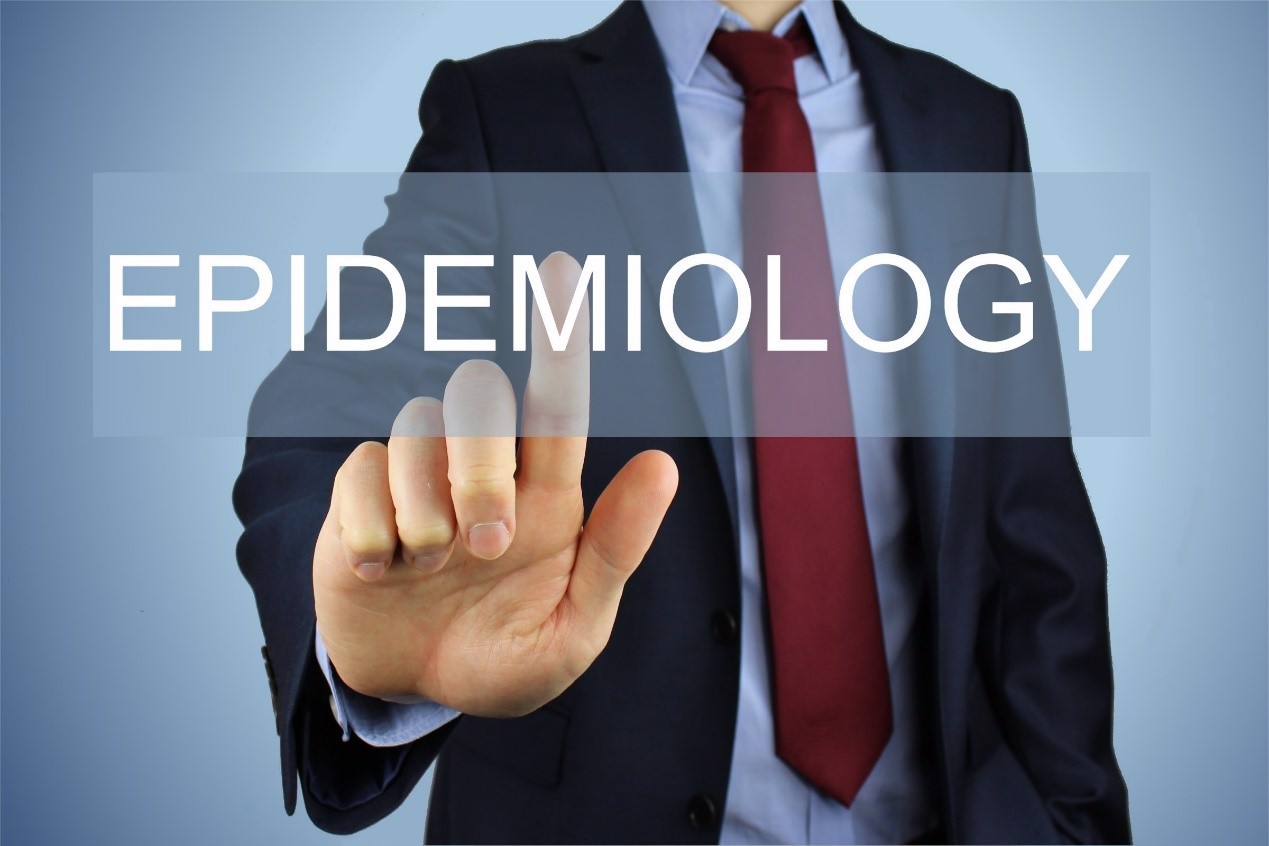 The annual incidence of aortic dissection is estimated to be 5 to 30 incidents per million individuals (compared to the much more common condition of acute myocardial infarction, which affects approximately 4400 cases per 1,000,000 person-years).

In the emergency room, three AADs are eventually diagnosed out of every 1000 patients who arrive with severe back, chest, or stomach pain. Age is a risk factor for nearly 75% of aortic dissections in people aged 40 to 70 years, with the majority occurring between the ages of 50 and 65. There are, nevertheless, some notable distinctions between older adult patients and younger individuals with ascending aortic dissections.

Presentations are frequently more modest than the classic description of a patient reporting sudden onset of intense 'tearing' chest pain. In as few as 15% to 43% of confirmed AAD patients, physicians properly suspect the diagnosis.

If left untreated, death exceeds 50% during the first 48 hours. Despite a plethora of research, many aortic dissections go undiagnosed in the emergency room.

The Stanford system is more commonly used. It divides dissections into two categories based on whether the ascending or descending aorta is affected. 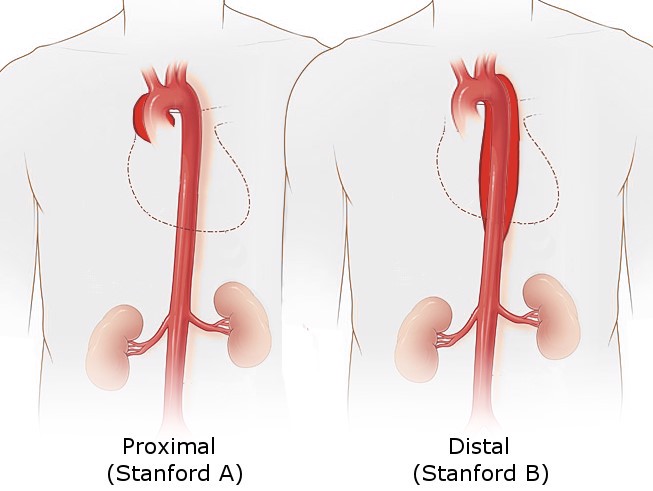 The DeBakey classification is based upon the site of origin of the dissection. 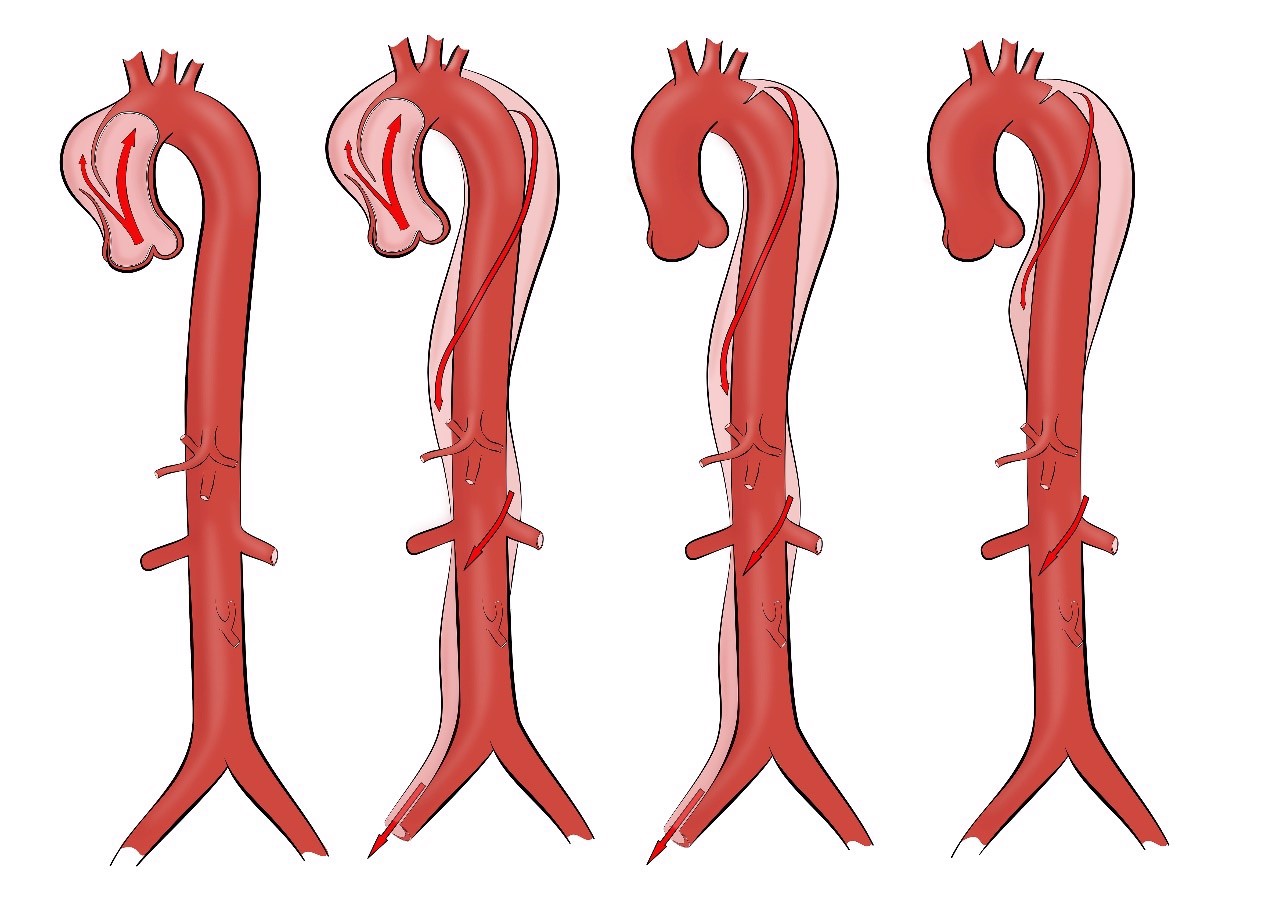 The aorta wall is divided into three layers: intima, media, and adventitia. Constant exposure to high pulsatile pressure and shear stress weakens the aorta wall, culminating in an intimal tear in vulnerable individuals. Following this rent, blood rushes into the intima-media gap, resulting in the formation of a false lumen.

The majority of these rips occur in the ascending aorta, mainly in the right lateral wall, where the aorta is subjected to the greatest shear strain. An AAD can spread anterogradely and/or retrogradely, causing branch occlusion that results in ischemia of the afflicted region (coronary, cerebral, spinal, or visceral), and proximal type A AADs can induce acute tamponade, aortic regurgitation, or aortic rupture.

Clinically, the amount of the dissection determines the clinical appearance of AAD, with symptoms correlating to the damaged cardiovascular structures. When conducting history of a patient with suspected AAD, three key factors must be addressed: the quality, radiation, and severity of pain from the outset. Several investigations have shown the severity of pain onset as the most accurate historical component.

While historically reported physical symptoms, such as a disparity in blood pressures in the upper limbs, a pulse deficit, or the presence of a diastolic murmur, increase the chance of AAD when present, they are present in fewer than 50% of confirmed cases of AAD.

Furthermore, the occurrence of chest pain in conjunction with any neurological indication, the combination of chest and abdomen pain, or chest pain followed with limb weakness or paresthesia should raise the clinician's suspicion of AAD.

AAD pain is frequently abrupt, reaches maximum severity rapidly, and can be ripping in nature. The AAD is painless in around 10% of individuals, which is especially frequent with Marfan syndrome. The discomfort may be felt in the front chest if the aorta is ascending, or in the back, if the aorta is descending. As dissection spreads caudally, it may take on a migratory appearance.

One-fifth of patients had neurological abnormalities at the time of presentation. Syncope is another typical symptom that can be caused by hypovolemia, arrhythmias, MI, or elevated vagal tone. If the dissection is antegrade, it may affect the extremities vessels, causing pulse loss, paresthesias, and discomfort.

If the AAD leaks or ruptures in the mediastinum, the patient may have dyspnea and hemoptysis.

Hypertension is particularly prevalent in AAD; if the patient appears with hypotension, this is a serious warning that a rupture has occurred. A blood pressure difference of more than 20mmHg between the arms should raise the possibility of AAD. Among the other features are:

A high index of suspicion is required for the diagnosis of acute aortic dissection, which entails the following:

Routine tests, such as an ECG and a chest x-ray, can assist differentiate between various probable causes of chest discomfort, but they can sometimes be deceptive. In 8% of instances of AAD, ECG abnormalities compatible with an acute myocardial infarction are seen. Furthermore, while a wider aortic profile raises the chance of AAD, its absence does not rule out the diagnosis.

Cardiovascular imaging is required for AAD confirmation to identify the presence of an intimal tear, establish the Stanford classification, and discover valve or branch involvement. For the diagnosis of AAD, most society recommendations prescribe either CT aortography or transesophageal echocardiography (TEE).

The institution's availability and competence should be considered when deciding which modality to use as a first-line screen. Because of its broad availability, CT angiography will most likely be the first sophisticated imaging method used in most emergency departments (EDs).

A widened mediastinum (>8cm) or fluid accumulation in the hemithorax owing to rupture may be seen on a chest x-ray.

If the patient is stable, a contrast-enhanced CT scan is advised. The spiral CT scan swiftly locate the intimal tear and assist the surgeon in planning the treatment.

Regardless of the site of the dissection, an immediate cardiothoracic or vascular surgical consultation should be undertaken if the diagnosis of AAD is established or strongly suspected. Acute ascending aortic dissections are considered a surgical emergency. For monitoring, the patient should have an arterial line and a central venous catheter. A foley catheter should be placed to measure urine output.

Concurrently begin pharmacological therapy, which includes appropriate analgesia (morphine is the chosen analgesic because it inhibits sympathetic output as well) and the administration of short-acting IV beta-blockers aimed at a heart rate of 60 bpm (reductions in heart rate and blood pressure reduces aortic wall tension and limit the extent of dissection).

Other blood pressure-lowering medications include esmolol, labetalol, and diltiazem. Because they inhibit compensatory tachycardia, B-blockers should be administered with caution in cases of acute aortic regurgitation.

Intravenous fluid injection is an appropriate initial step in hypotensive individuals. Vasopressors can be used to maintain enough perfusion if necessary, however, they may promote additional false lumen propagation. Inotropic drugs should be avoided since they are likely to increase the force and rate of ventricular contraction, causing aortic wall stress to deteriorate.

Excision of the intimal rip, obliteration of entrance into the false lumen proximally, and reconstitution of the aorta with the interposition of a synthetic vascular graft are all surgical treatments for type A AAD. Surgical surgery for type B AAD is often reserved for individuals who have a difficult course of the disease.

When AAD involves the ascending aorta, the aorta must be replaced and the valve must be evaluated. Most of the time, the aortic valve must be excised and replaced with a prosthetic valve. Dissections of the descending aorta are complicated and can result in paraplegia. Dissections involving the aortic arch are the most challenging. Surgical mortality ranges from 5 to 20%. Even those who survive must heal over an extended period of time.

Because of the high surgical mortality rate, endovascular treatments are now used to treat AAD. An endovascular stent implantation is associated with much-reduced morbidity as compared to surgery, however, patient selection is critical.

Alternative diagnoses on the differential of aortic dissection include the following life-threatening conditions: 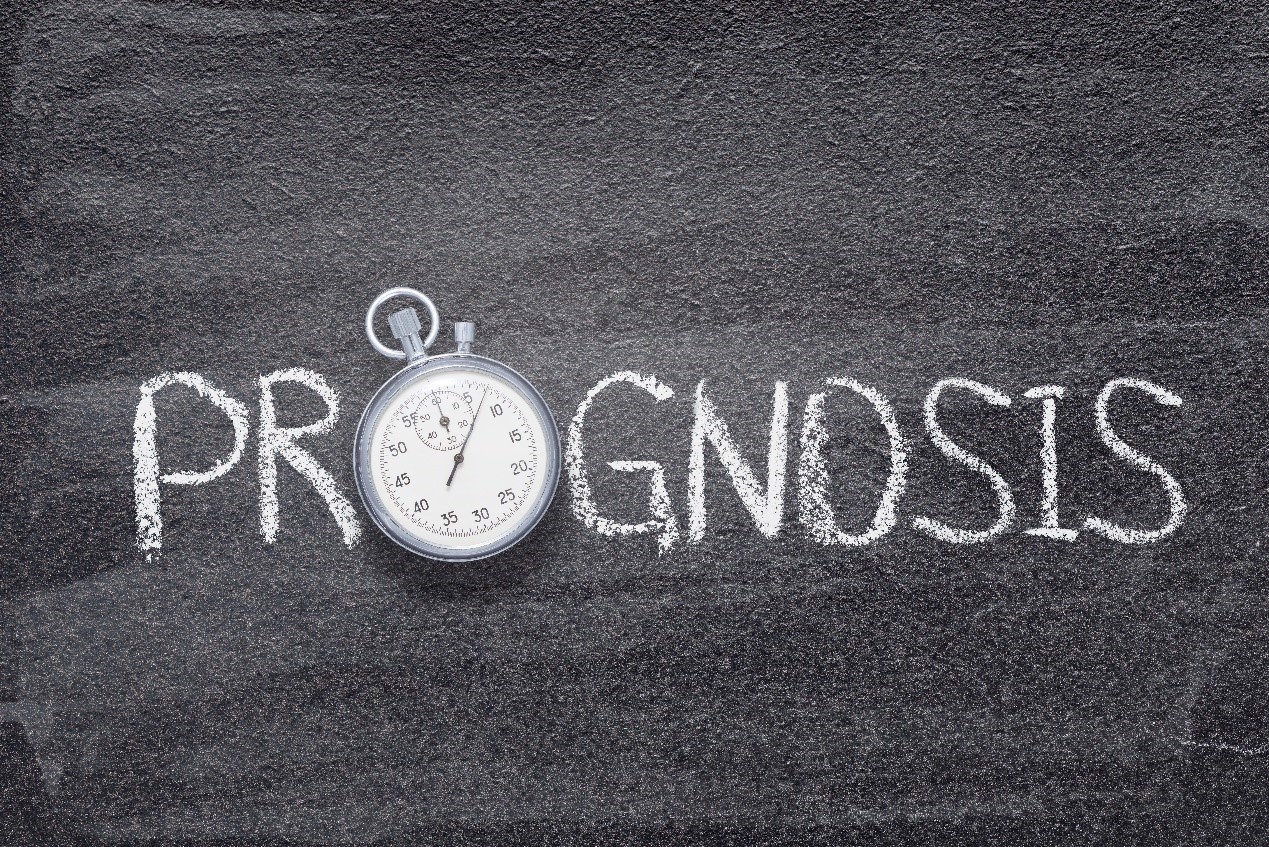 Aortic dissection still has a significant death rate. At least 30% of patients die after arriving at the emergency room, while death rates following surgery range from 20% to 30%. Comorbidity puts a toll on individuals who survive the procedure, and their quality of life suffers as a result. The first 10 days after an acute aortic dissection had the highest death rate. Patients with chronic dissection have a better prognosis, although their life expectancy is reduced when compared to the general population.

Several studies have found that when patients are handled by an interprofessional team of healthcare specialists that includes a cardiologist, intensivist, pulmonologist, nephrologist, cardiac surgeon, interventional radiologist, and anesthesiologist, their results increase.

Furthermore, the pharmacist must educate the patient on the significance of blood pressure control and drug adherence. Aortic dissection results seem to be better at big volume centers compared to small centers that conduct fewer than 5 cases per year. 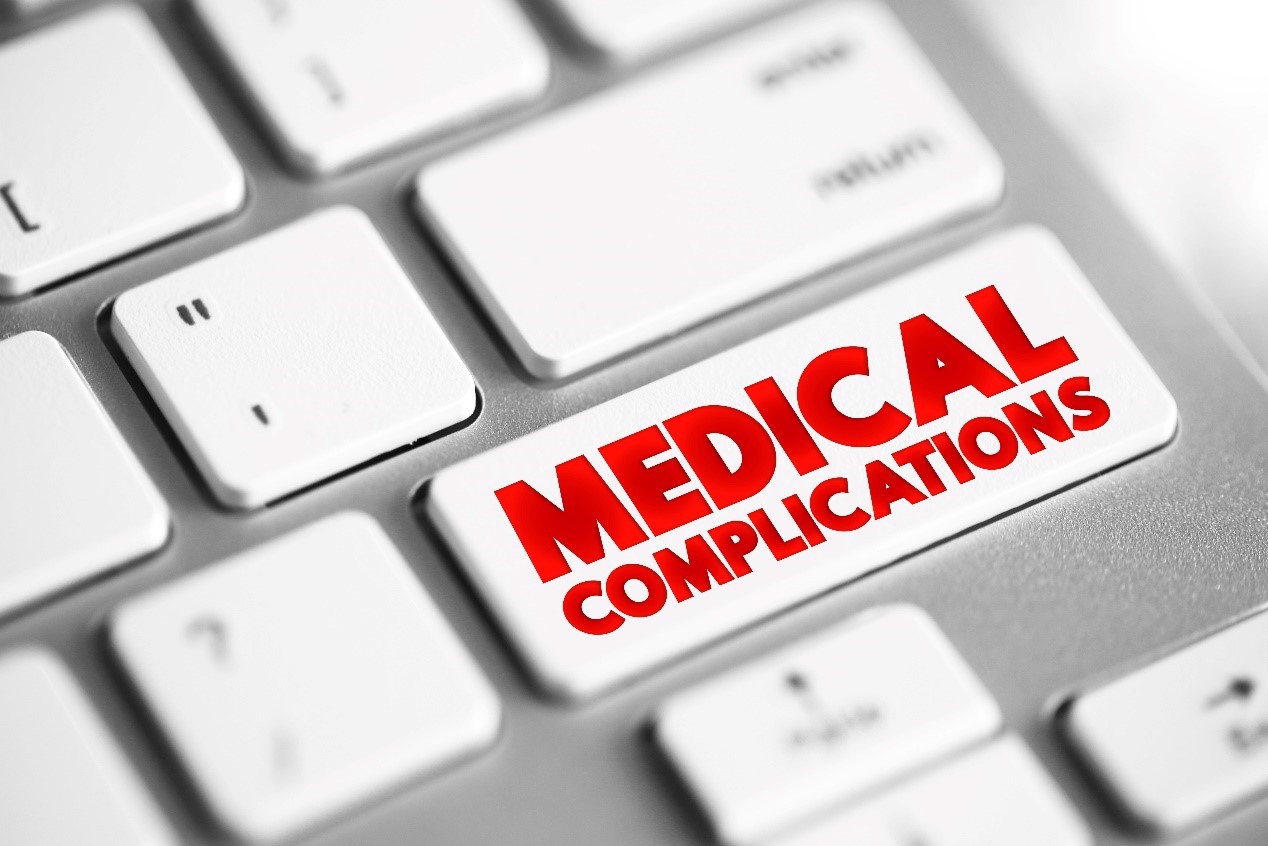 If undetected, aortic dissection is a medical emergency with a very high fatality rate. Because the majority of patients arrive to the emergency department, an interprofessional team is essential.

When a patient with an aortic dissection arrives at the emergency room, a standardized protocol must be in place to guarantee that the diagnosis and care are completed as soon as possible. The triage nurse should be well informed of the significance of the patient's rapid admittance and confer with the emergency physician and heart surgeon.

The technique of diagnosis is determined by the patient's stability and the availability of imaging testing. An ECHO or a CT scan are the two alternatives. A patient who is unstable should never be sent to the radiology suite. A cardiologist should be sought instead for a bedside echo.