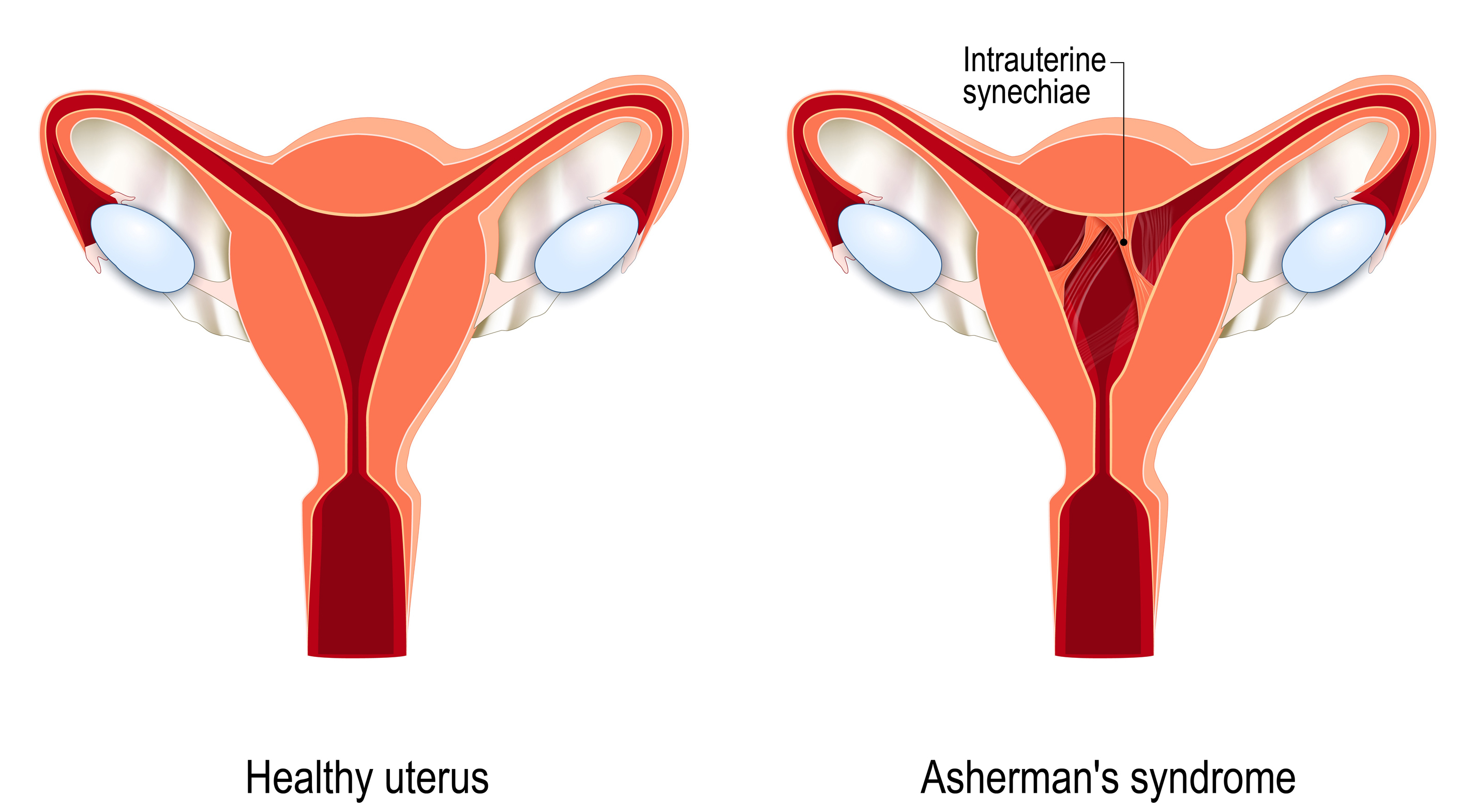 Asherman's syndrome is an uncommon, acquired uterine gynecological condition. It is distinguished by the bonding of scar tissue that borders the uterine walls, which reduces the volume of the uterine cavity. Intrauterine adhesions or synechiae can form as a result of surgical scraping or cleaning of tissue from the uterine wall (dilatation and curettage [D and C]), endometrial infections (e.g., genital TB), or other reasons.

Asherman's syndrome can range from severe (when more than 75% of the uterine front and back walls fuse together) to moderate and mild, where only tiny sections of the uterine wall fuse together. Depending on the severity of the condition, patients may have a variety of symptoms, including decreased menstrual flow, increased cramping and abdominal discomfort, ultimate cessation of menstrual periods (amenorrhea), and, in some women, infertility.

Asherman's syndrome, which is also referred to as intrauterine adhesions or intrauterine synechiae, occurs when scar tissue (adhesions) forms inside the uterus and/or the cervix. Scar tissue in the uterus or cervix forms as a result of the illness. The uterus's walls thicken because of the scar tissue. They occupy more room than usual, causing a smaller uterus. ‌

The walls can fuse in extreme circumstances. An intrauterine adhesion (IUA) is a term used to describe the condition. Because Asherman's syndrome isn't usually diagnosed, it's difficult to tell how common it is.

Asherman's syndrome is a rather uncommon condition. It's difficult to estimate how common it is because it's not often diagnosed. According to certain studies, IUA occurs in approximately 20 percent of women who have undergone dilatation and curettage due to pregnancy problems.

There's a 25% probability of getting Asherman’s syndrome if a D and C are done between two and four weeks after birth for a retained placenta. The more D and C operations a woman undergoes, the higher her risk of getting this illness.

Other pelvic procedures, including a cesarean delivery or the extraction of fibroids or polyps, might result in adhesions. Other potential causes include;

Less often, it results after a dilation and curettage for a non-obstetrical procedure for excessive bleeding, sampling for endometrial cancer, or removal of endometrial polyps. It can also occur after surgery to remove uterine fibroids. In patients with persistent excessive uterine bleeding (hypermenorrhea), specific procedures to create these adhesions throughout the uterine cavity is the desired goal to control the bleeding. These procedures are done to ablate the endometrium and create scarring. In the developing world, it may also occur due to infections from schistosomiasis or tuberculosis(genital).

Asherman syndrome may go unrecognized in women who are not trying to conceive since they may not recognize or be concerned with the symptoms. These women may have hypomenorrhea. Therefore, Asherman syndrome may be underdiagnosed because it is usually undetectable by routine examinations or diagnostic procedures such as an ultrasound scan. It may occur in up to 13% of women undergoing a termination of pregnancy during the first trimester, and 30% in women undergoing a dilation and curettage (D and C) after a late spontaneous abortion.

Women with placental abnormalities (e.g., placenta accreta) may have a higher risk of developing Asherman syndrome as the placenta adheres to deeper layers within the uterus and becomes more difficult to remove. The incidence may be as high as 23.4% in patients undergoing procedures two to four weeks after the initial procedure for a vaginal delivery or missed abortion. The risk increases for patients undergoing repeated procedures for bleeding or repeated elective termination of pregnancies.

Asherman syndrome occurs when trauma to or removal of the basal layer of endometrium in opposing areas within the uterine cavity. Such injury to the lining triggers inflammation that allows these adhesive bands to form from one side of the cavity to the other. Abnormalities in placentation where the placental tissue burrows below the basal layer of the endometrium significantly increase the risk of developing Asherman syndrome. The extent of the adhesions defines whether the case is mild, moderate, or severe. The adhesions can be thin or thick, spotty in location, or confluent. The adhesive bands are usually not vascular, an important consideration when discussing treatment options.

Signs and Symptoms of Asherman’s Syndrome

Most of the women with Asherman's syndrome don't have regular periods or don’t get any at all. Some women experience pain around the time their period is due, but no blood. This could mean you are having menstruation, yet the blood cannot exit the uterus due to scar tissue blocking the exit.

Your periods may be scarce, irregular, or nonexistent owing to another ailment. It can be health disorders like menopause, stress, unexpected weight loss, pregnancy, obesity, exercising excessively, using contraception pills, or polycystic ovarian syndrome (PCOS).

If your periods cease or become infrequent, consult your doctor or gynecologist right away. It could be Asherman's syndrome symptom. They can employ diagnostic tests to figure out what's wrong and start treating you. 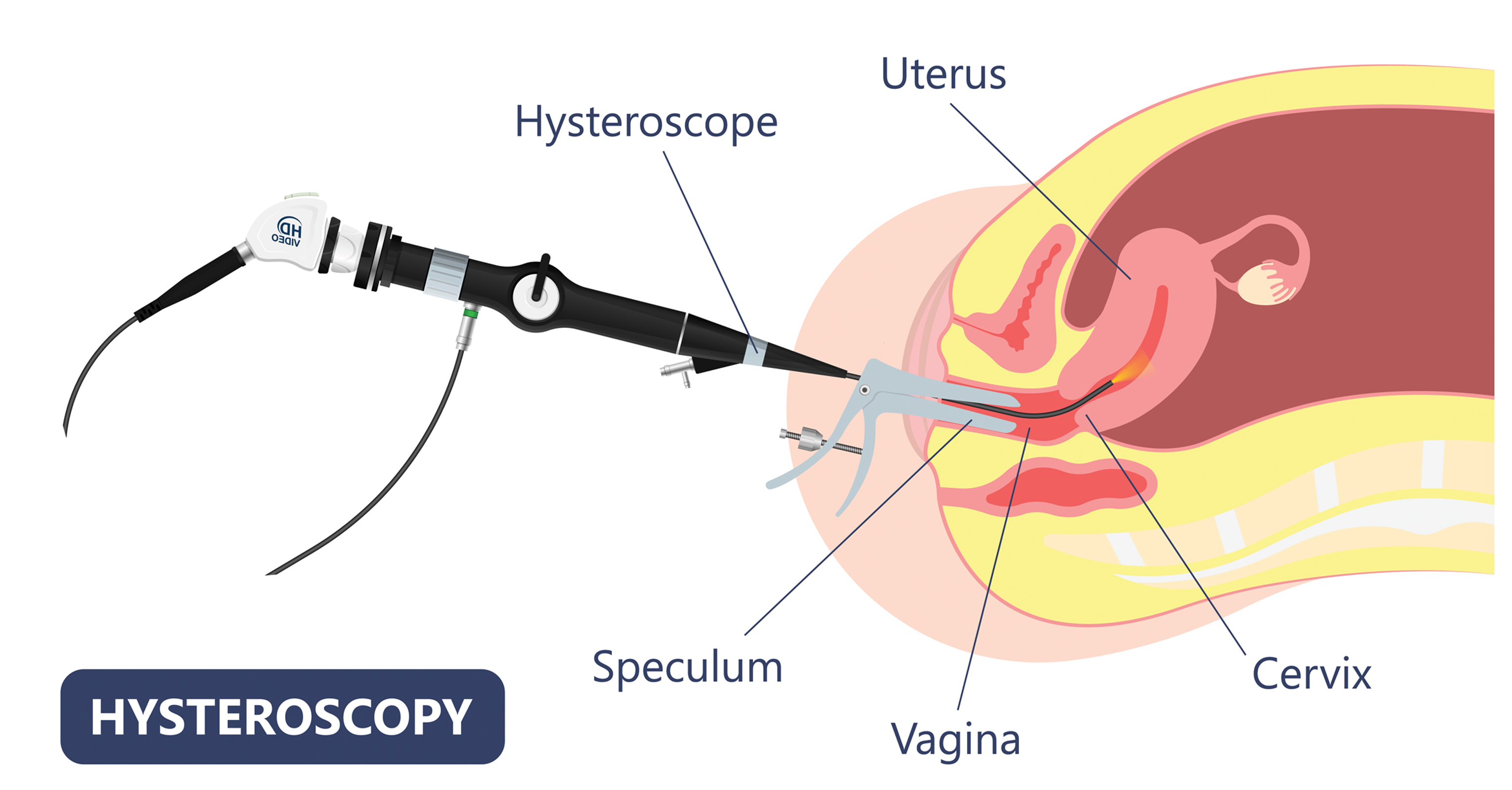 If the gynecologist suspects Asherman’s syndrome, he or she will run blood tests to rule out other possible causes of your symptoms. An Asherman’s syndrome ultrasound may also be useful in assessing the thickness of the lining and follicles of the uterus.

Hysteroscopy may be the most effective approach for diagnosing Asherman’s syndrome. The gynecologist will dilate the cervix and then implant a hysteroscope during this operation. A hysteroscopy is similar to a miniature telescope. It enables the physician to see the womb and check whether there is any form of scarring.

Sometimes, the gynecologist may also suggest a hysterosalpingogram (HSG). He or she can perform an HSG to see how your uterus and fallopian tubes are doing. A specific dye is injected into the uterus during this procedure to help the doctor discover abnormalities in the uterine cavity. It also helps identify any growths or obstructions in the fallopian tubes under an x-ray.

If you have any of the following symptoms, consult with your gynecologist about undergoing a test for Asherman’s syndrome;

Operative hysteroscopy is a surgical procedure that gynecologists use during Asherman’s syndrome treatment. Adhesions are removed using small surgical tools attached to the tip of the hysteroscope. This operation is always done under general anesthesia.

You will receive antibiotics to avoid infection and estrogen tablets to enhance the health of your uterine lining after the treatment. A follow-up hysteroscopy will be conducted to ensure that the operation went well and that your uterus is free of adhesions.

Because adhesions sometimes recur after the procedure, physicians advise waiting at least one year before you attempt to conceive. This is to make sure adhesion has not happened. If you aren't intending on having children and the issue is not causing any pain, you may not require this treatment.

Hormone treatment, such as estrogen supplements, has been advocated to aid with tissue healing and uterine lining restoration. While some studies have shown that estrogen therapy may improve uterine wall cell regeneration and growth, further clinical trials are being conducted to validate the efficacy of estrogen therapy in the treatment of Asherman's syndrome. Antibiotics are frequently recommended after hysteroscopic surgery. While antibiotics do not directly prevent re-adhesion, they do help prevent infections and inflammation that can damage the uterus and cause uterine wall re-adhesion.

The chances of conceiving and delivery after surgery are lower in patients with moderate to severe disease but may improve after surgery if the cavity can be reconstructed and menses recur. Although a normal-appearing uterine cavity may be seen after repeated surgeries, rebuilding a normal endometrial lining may lag for some time after surgery or may not reoccur.

Asherman's syndrome can result in repetitive pregnancy loss/abortions despite surgery and treatment. Recurrence of the adhesions can be seen even after adhesiolysis.

Although the risk of endometrial cancer in women with Asherman syndrome may be lower than the general population, women with Asherman may develop endometrial cancer before or after menopause. Since the signs and symptoms often found in these women (early or abnormal bleeding, thickened endometrium) may be missed due to the scarring or cervical obstruction; therefore, these women may benefit from a routine sonographic evaluation of the endometrium to monitor changes. 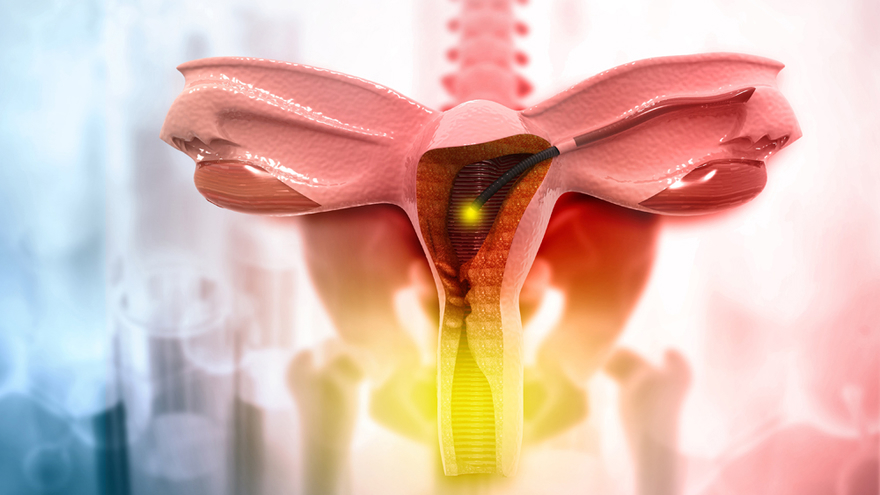 Some researchers believe that women who undergo uterine surgery or have injuries should also receive hormone therapy or mechanical uterine wall separation following their procedures to avoid IUA. This means that a stent is inserted into the uterus and remains there for some time to prevent IUA.

Before attempting to conceive, women who have had uterine surgeries may be advised to get an imaging test to determine if they have any adhesions. Furthermore, research states that the order in which D and Cs are conducted impacts adhesion development. If a postpartum D and C is performed, adhesions are more likely to occur two to four weeks following birth.

How Asherman’s Syndrome Can Affect Fertility 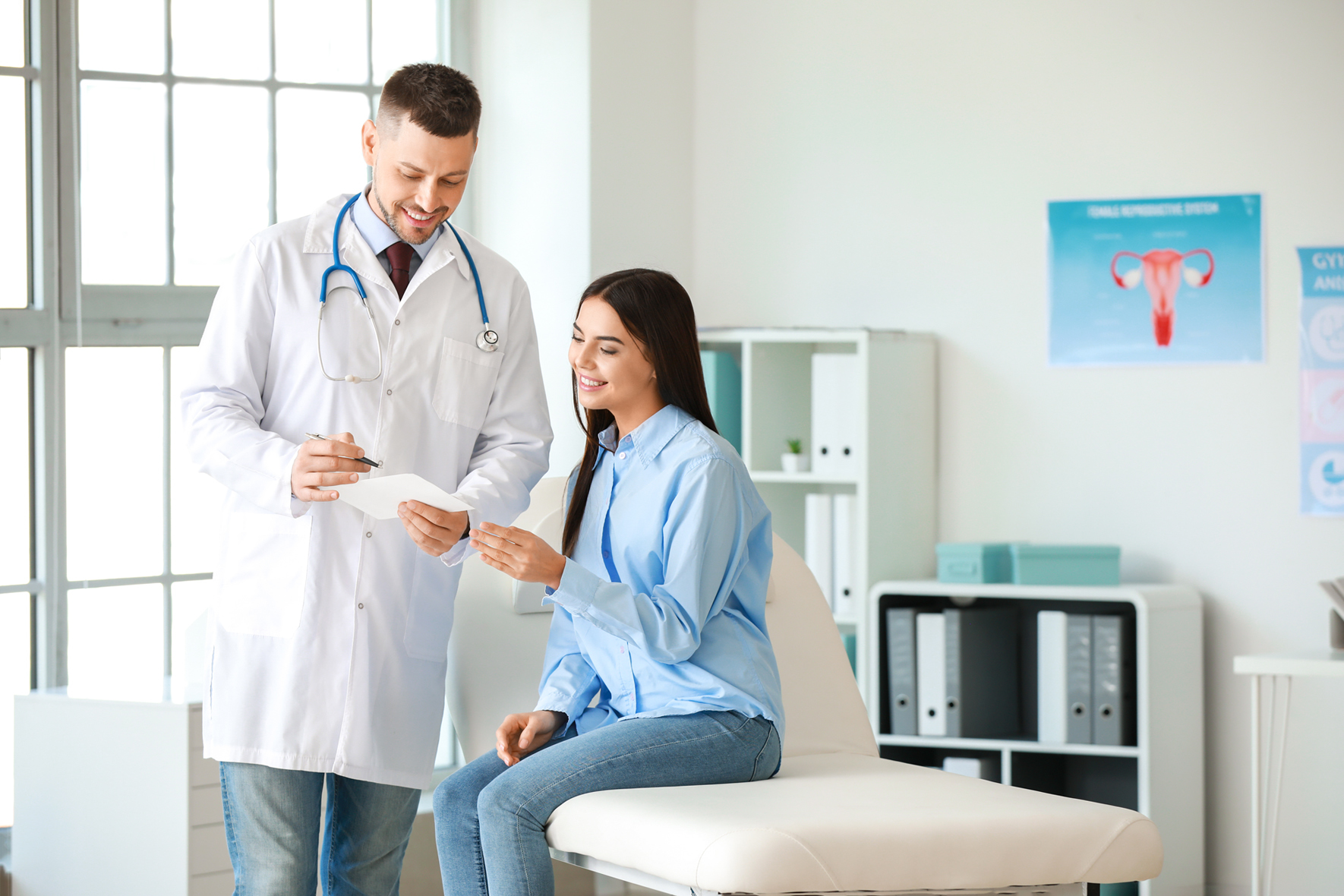 Asherman’s syndrome is sometimes the reason why some women are unable to conceive or have recurring miscarriages. If you have Asherman’s syndrome, you can still get pregnant. However, the adhesions inside the uterus may pose a huge risk to the growing fetus. Therefore, you will have a higher chance of miscarriage and stillbirth than women who don't have this issue.

Therefore, if you have Asherman’s syndrome, your doctor may want to keep an eye on your pregnancy closely. Surgery can be used to treat Asherman’s syndrome. This procedure usually improves your chances of conceiving and delivering successfully. Doctors advise that you wait a year after undergoing surgery before you try to conceive.

Gynecologists can categorize Asherman’s syndrome into the following stages;

You may find it difficult, if not impossible, to conceive if you have Asherman’s syndrome. It could also raise your chances of significant pregnancy issues. It is frequently preventable and treated.

Consider seeking help from a support group if you have Asherman’s syndrome and if your fertility can’t be restored. Women who wish children to conceive but are unable to have various options. Surrogacy and even adoption are two of these alternatives. 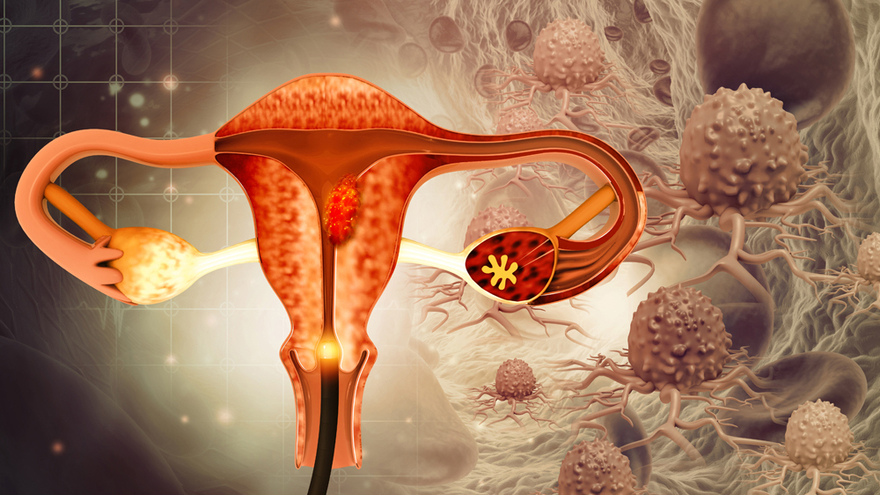 Asherman's syndrome affects women who have intrauterine adhesions and experience signs and symptoms like menstruation irregularities and pain. Following uterine trauma, amenorrhea (absence of menses) is the most common symptom.

Although Dilatation and curettage (D&C) being the most frequently used intervention for removing Retained products of conception(RPOC), hysteroscopic resection, in comparison, is associated with lower rates of intrauterine adhesion formation. Hysteroscopic resection gives the advantage of direct visualization of the uterine chamber, thus allowing the removal of RPOC with minimal damage to the endometrium.

Significant adhesions may necessitate more than one surgical procedure to repair. The majority of cases can be fixed, and the many women who have this condition will eventually recover successfully. Some people will have a condition that cannot be corrected, and they will need to seek alternative treatment, such as employing a gestational carrier.