Obesity is becoming more prevalent, with the United States presently ranked second in the world. Obesity (according to BMI) affected 40 percent of people in the United States, according to CDC data, involving around 100 million adults. Nearly 5 percent of the people were morbidly obese (BMI greater than or equal to 40). Obesity increases the risk of developing diabetes, malignancies, hypertension, hypercholesterolemia, obstructive sleep apnea, cardiovascular disease, cerebrovascular disease, acid reflux disease (GERD), osteoarthritis, and hepatic steatosis, among other comorbidities.

In 2008, the estimated yearly healthcare expenses of obesity in the United States were $200 billion, with the expense for just an obese person reaching $1,500 greater than those of a healthy weight, posing a major financial burden.   The expense of addressing obesity-related disease in the U.k. is estimated to be 6 billion euro each year, rising to 11 billion euros by 2050, according to the National Health System.

The body mass index is a measurement of a person's relative weight in relation to their height, and it has a strong relationship with total body fat.

Definition of obesity as per WHO is having a BMI of 30 or more.

Obesity can be treated with nonoperative treatment or bariatric surgery. Dietary improvements, exercise, behavioral alterations, and prescription medication are all part of the nonoperative treatment plan. For the most part, diet and physical activity recommendations have been shown to be ineffective. A cross-sectional study employing Behavioral Risk Factor Surveillance on 11 thousand persons in the United States indicated that despite the majority of the population are trying to lose weight, only 20 percent successfully lower their energy consumption and exercise for 150 min on weekly basis. Pharmacological intervention has had poor long-term outcomes in weight management, with a mean weight decrease of just 4 percent observed.

What is Gastric Bypass Surgery 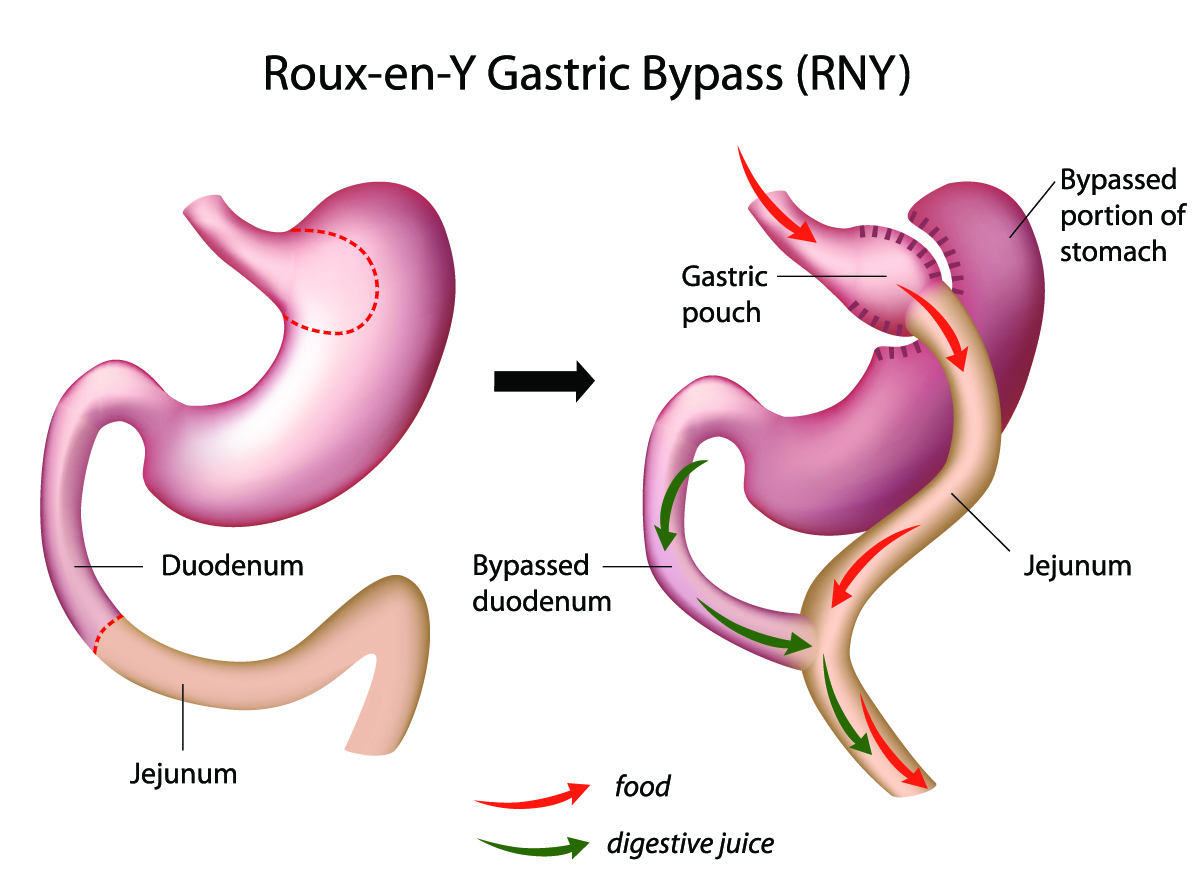 Gastric bypass surgery, also known as Roux-En-Y Surgery, is a laparoscopic technique involving the establishment of a stomach pouch and is undertaken to achieve dramatic and lengthy weight loss in highly obese individuals. The one-anastomosis gastric bypass is a less invasive alternative to the traditional Roux-en-Y bypass surgery.

The four anatomical regions of the stomach are explained below:

Curvatures of the stomach:

Connections to the peritoneum:

The two omenta separate the peritoneal cavity into bigger and lesser sacs, which connect through the Winslow foramen.

The celiac trunk and its branches provide a dense anastomotic system that supplies the stomach with blood.

Drainage of the Venous System:

In today's world, there are certain indications for gastric bypass surgery. A physician may perform this operation in rare cases of gastric outlet obstruction caused by malignancies or peptic ulcers.

The National Institutes of Health released a consensual statement regarding bariatric surgery patient selection.   Patients who met one of the following criteria were deemed eligible for surgery:

Patients must have tried and failed to reduce an appropriate amount of weight with guided diet adjustments to be considered for gastric bypass surgery. Individuals must also adhere to postoperative dietary and exercise guidelines. 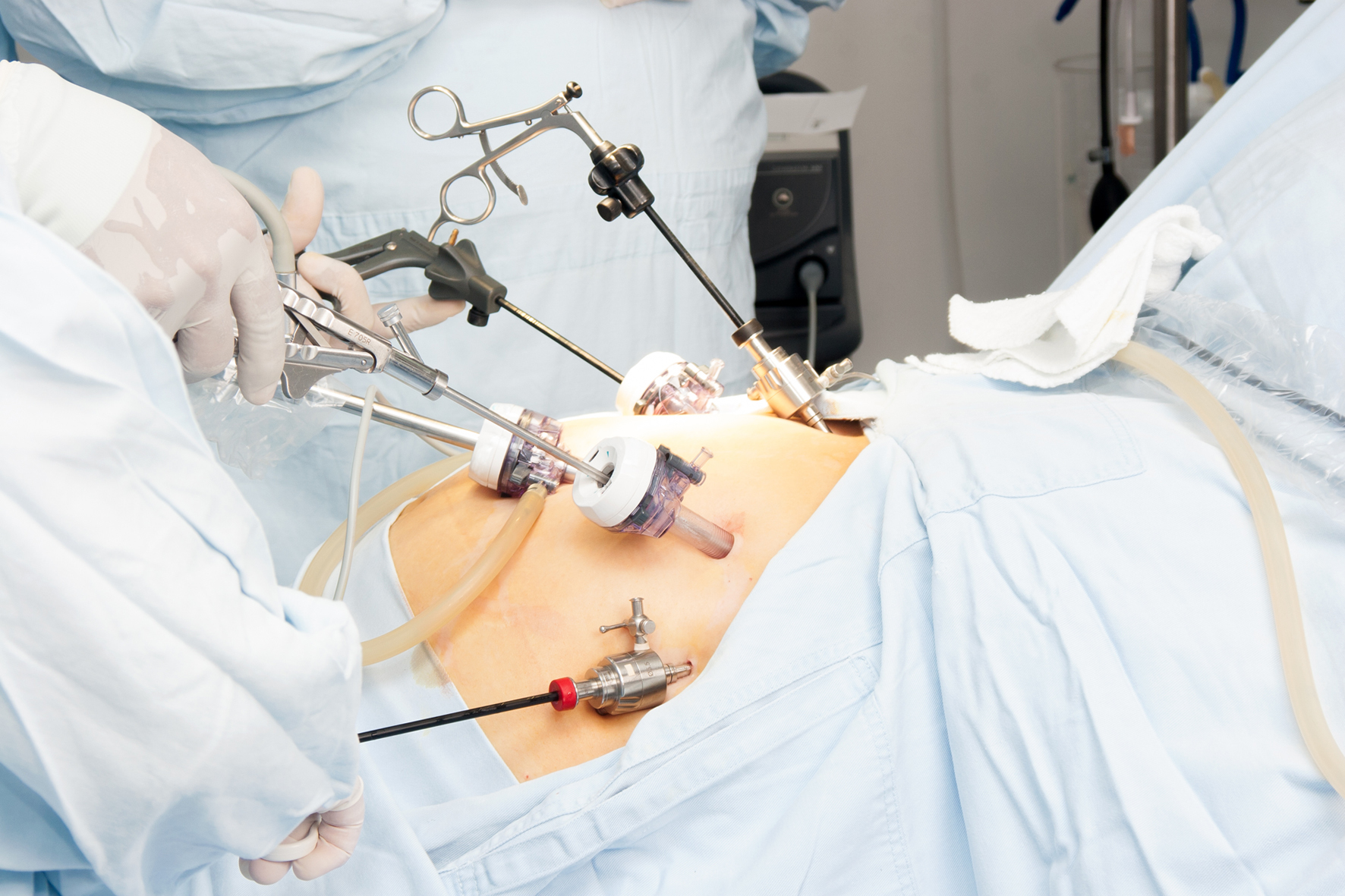 Although there are numerous procedures for performing a gastric bypass surgery, many of the steps and equipment needed are similar and include the following:

Before being considered for bariatric surgery, patients must be evaluated by a multidisciplinary team. A nutritionist, a mental specialist, the surgical team, and the primary care physician are among those involved. The following members are required for the operative component:

All patients should have an endoscopy with H. pylori screening, abdomen ultrasound, pulmonary function tests(spirometry), and a routine laboratory assessment performed prior to surgery.

Patients' risk classification is a field of study that aims to improve which client groups are offered gastric bypass surgery.

The obesity Surgery-Mortality Risk Score (OS-MRS), which has been approved to be used in gastric bypass surgery, consists of the subsequent items:

Class C patients are the most frequently involved in gastric bypass surgery.

Preoperative antibiotics and venous thromboembolism prevention measures are administered to the patients half an hour before the surgery. In the preoperative zone, cutters are used to cut belly hair. A foley catheter is inserted after anesthesia is administered, and an orogastric line is placed in the stomach.

The following are some of the most prevalent approaches and variants used by surgeons in gastric bypass surgery:

The patient is in a flat spread-legged position while being under general anesthesia. Once the patient is prepped and draped, the chief operator stands in between legs, and the monitor is placed above the patient's head. It can be difficult to establish pneumoperitoneum in extremely obese individuals. The Veress needle is most usually put in the right hypochondrium, with an optical trocar inserted 3-5 cm above the umbilicus. Additional 12 mm ports are inserted in the left and right upper quadrants, respectively. To withdraw the liver, a 5 mm port and Nathanson retractor are put into Martin's arm.

Putting the patient in reversed Trendelenburg, pulling the left lobe of the liver away with a Nathanson retractor, and pulling the omentum inferiorly allows for proper access to the gastroesophageal junction.

The diaphragm's left crus and gastro-hepatic ligament are exposed by starting cutting at the angle of His. To mobilize the stomach, the pars flaccida and retro-gastric attachments are separated. The lesser sac is entered through the lesser curvature of the left gastric artery and vein, which separates neurovascular branches from the artery and vein.

The ideal gastric pouch is up to 30 cc in capacity and mostly comprises the stomach's lesser curvature. With long-term follow-up, this approach has shown consistent weight loss for the past 15 years.  Starting at the lower boundary of the oblique fat pad, straight staplers are pushed transversely. A bite of 2–3 cm is taken. Then, the straight stapler is discharged vertically towards His angle.

The biliopancreatic limb (the afferent limb) is made up of the duodenum and proximal jejunum, which are connected proximally to the remaining stomach. Digestive enzymes from the stomach, hepatobiliary system, and pancreas are found in the limb. In a conventional gastric bypass, the biliopancreatic limb is created by measuring nearly 40 cm from the Treitz ligament and dividing it with a stapler.

The roux limb is measured from the jejunal division point 75 to 150 cm, with an average of 120 cm. At this point, the biliopancreatic limb is anastomosed to the distal segment of the jejunum, forming a side-to-side jejunojejunostomy referred to as the JJ anastomosis.

An upper endoscopy leak test is conducted before the procedure is completed when the gastrojejunostomy is apparent. The gastric pouch and gastrojejunostomy are immersed in saline while the patient is in Trendelenburg. To test patency, an endoscope is pushed through the gastrojejunostomy and subsequently expanded with gas. The submerged anastomosis is examined for bubbles, which could suggest a leak. When checking for a leak, some surgeons prefer to use methylene blue dye rather than gas.

In terms of post-procedure care and length of stay, protocols differ. an overnight stay is safe for the majority of patients. As same discharge has been linked to higher mortality and morbidity rates.

Side Effects of Gastric Bypass Surgery

Gastric bypass has a death rate of about 2 per 1000, which is greater than both sleeve gastrectomy and gastric banding, which have the lowest mortality of the three.

In the operating room, the camera lens is attached to a monitor screen. This allows the operator to see within the stomach while doing the procedure, which takes around two to three hours.

We advise our patients to bring a 24-hour dietary recall to their visit to assess proper nutrition. We advise them to drink at least 3L of water every day and stay away from sugary drinks and alcohol. Because of the limited size of the stomach pouch, which causes the individual to take fewer amounts of food, the diet following gastric surgery may be insufficient. Consumption of protein is frequently a concern, with most people consuming less than of optimum for body weight. Most patients can ingest 0.8–1 g of protein/kg of ideal body weight from a combination of foods and liquid supplements, resulting in a daily protein intake of 60–80 g.

The following are five guidelines for fluid consumption (in order to encourage fluid intake and improve satiety between meals):

The surgical admission for a Roux-en-Y gastric bypass (RYGB) costs between $20 000 and $30 000 (including the procedure and immediate preoperative, intraoperative, and postoperative treatments).

The Roux-en-Y gastric bypass is a malabsorptive surgery used to help people who have a BMI of 40 or more to lose weight, or who have a BMI of 35 or more and have obesity-related problems. Gastric bypass surgery can be done openly, laparoscopically, or robotically.  The laparoscopic gastric bypass is the second most popular weight-loss operation. It has clear economic and patient satisfaction advantages over the standard open technique, with similar results. After laparoscopic gastric bypass, patients should plan to lose about 60 percent of their extra weight and have excellent long-term management of obesity-related complications. A laparoscopic gastric bypass can be done with low morbidity and great results once a doctor has gained knowledge. Following up after gastric bypass is crucial and necessitates a multidisciplinary approach. For the vast majority of patients, the advantages much outweigh the dangers, and they are likely to enjoy better and longer lives as a result of surgery. Patients must understand that the surgery is merely a tool and that reducing weight and maintaining it off will necessitate considerable effort on their side, especially in terms of healthy eating and exercise. Follow-up is crucial for achieving the finest long-term outcomes.