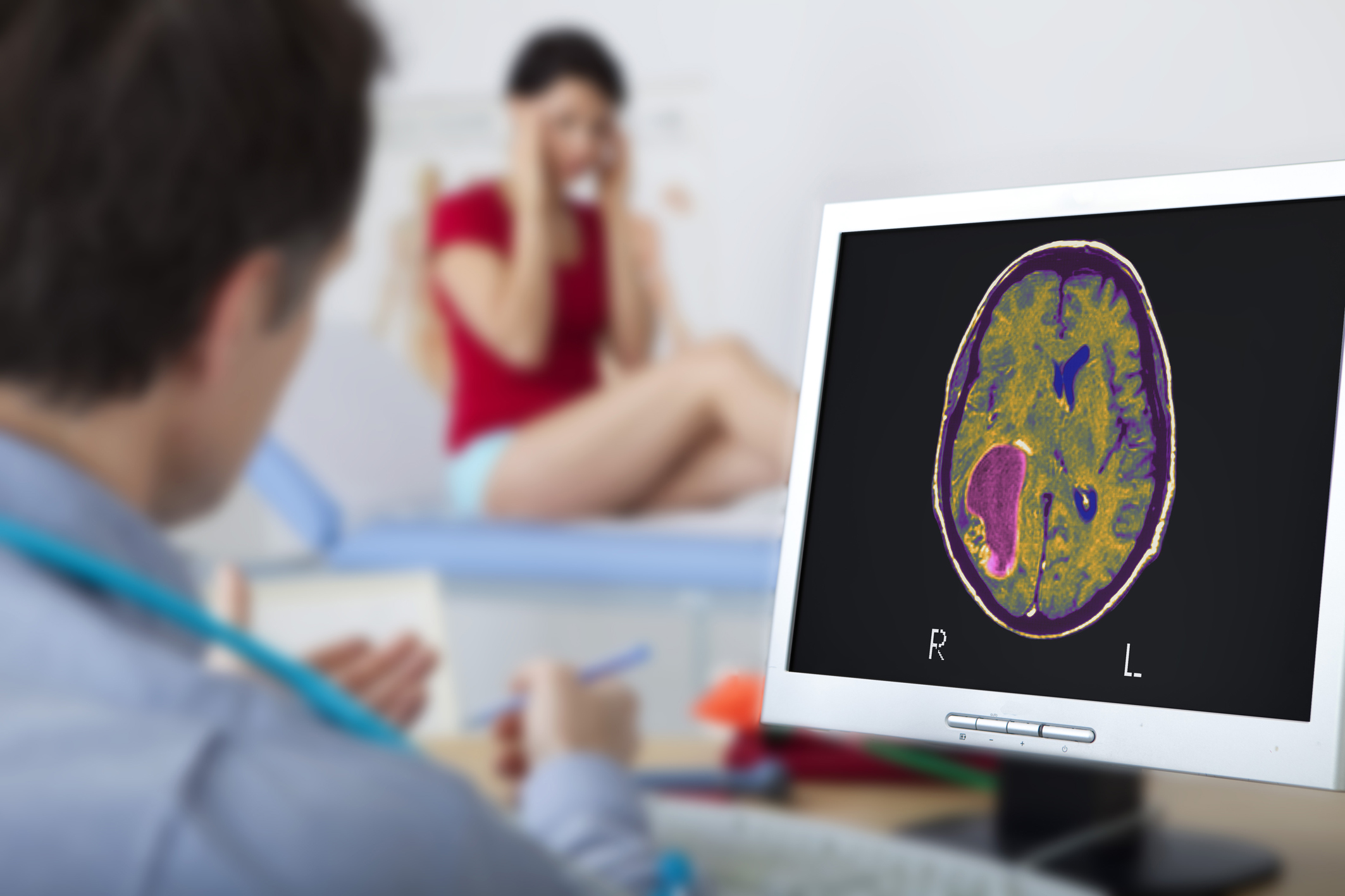 Glioma is the most prevalent kind of glial-cell-derived central nervous system (CNS) tumor. Every year, six cases of gliomas are identified per 100,000 persons in the United States. Gliomas are tumors that infiltrate the surrounding brain tissue in a highly diffuse manner. Glioblastoma is the most dangerous type brain tumor, whereas pilocytic astrocytomas are the least dangerous.

Previously, diffuse gliomas were divided into subgroups and grades based on histopathology, such as diffuse astrocytomas, oligodendrogliomas, or mixed gliomas/oligoastrocytomas.

Gliomas were recently classified using molecular and genetic markers. These advancements have more specific prognostic and therapeutic effects for glioma patients. Gliomas are graded from I to IV depending on the degree of proliferation indicated by the mitotic index and the presence or absence of necrosis, in addition to molecular and genetic markers.

The optimum therapy for a certain patient considers the tumor's location, prospective symptoms, and the advantages vs dangers of various treatment approaches.

Glioma treatment is customized to each individual patient and may include surgery, radiation therapy, chemotherapy, or observation. A multidisciplinary team is most suited to treating individuals with brain tumors. Neurosurgeons, medical neuro-oncologists, radiation therapists, and pathologists are among those who fall into this category. 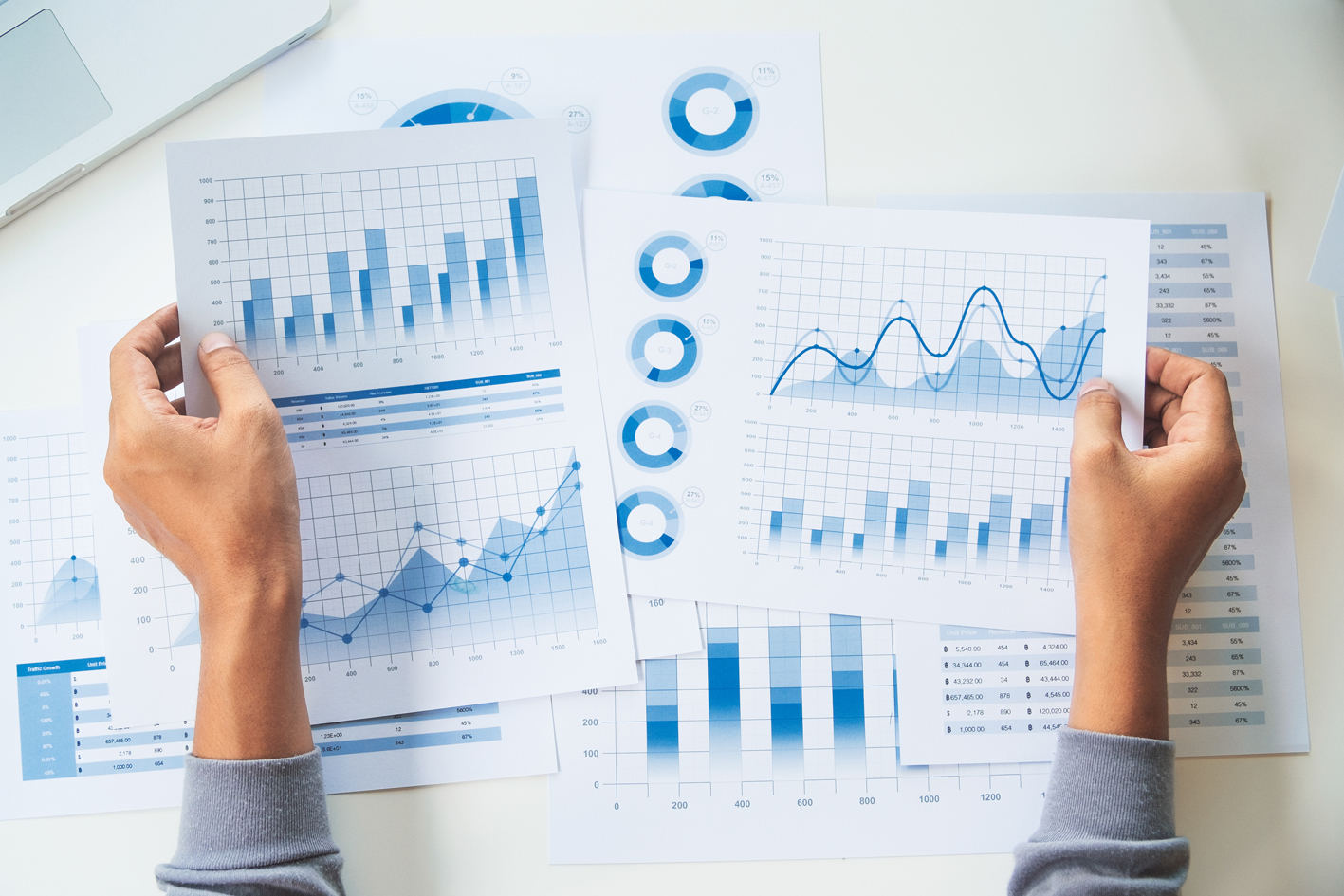 Each year, an estimated 80,000 new cases of primary brain tumor are detected in the United States. Gliomas account for approximately one-fourth of all cancers (i.e. 20,000). Each year, roughly 12,000 cases of glioblastoma are diagnosed (approximately 15 % of total newly diagnosed brain tumors). 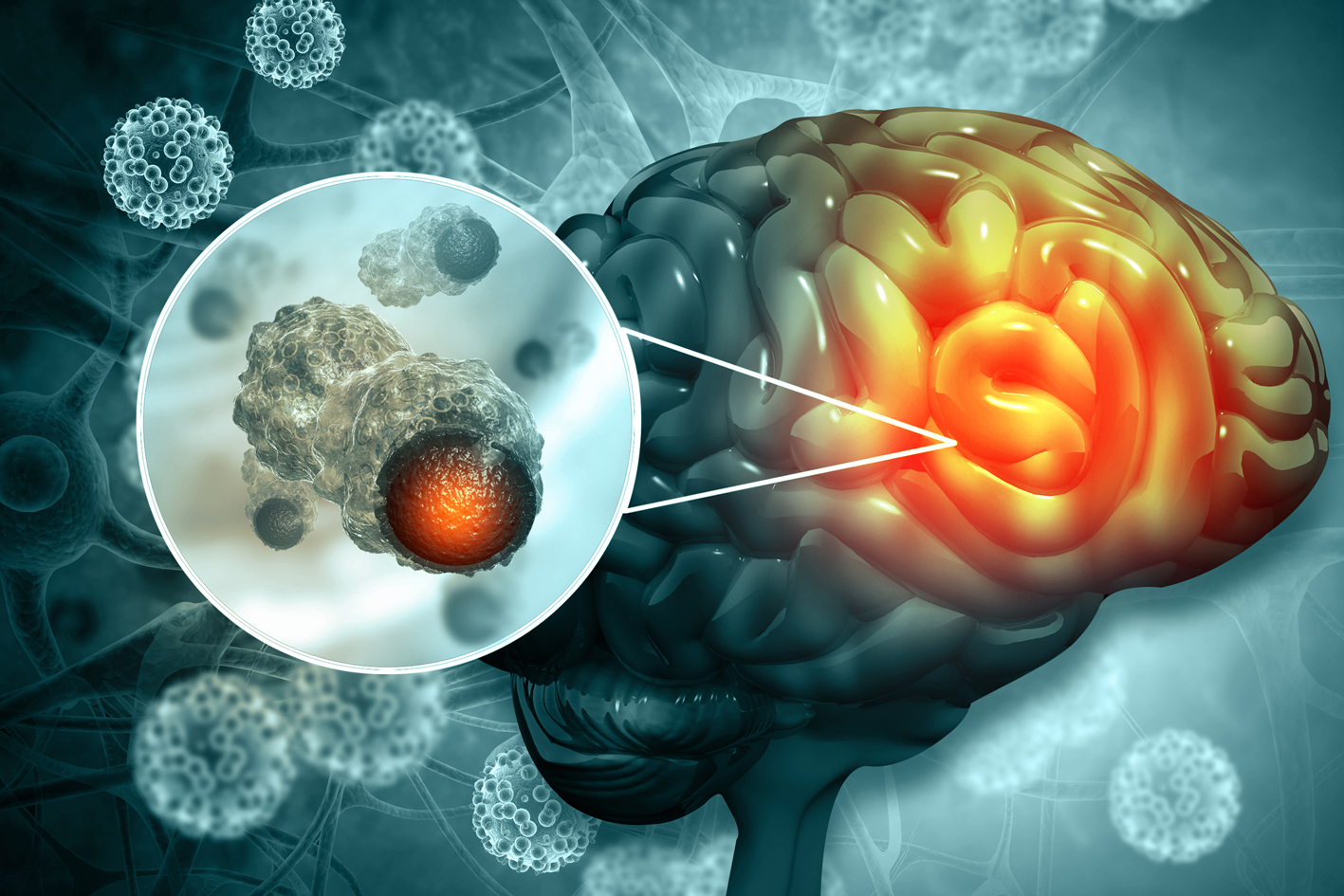 Headaches are the most prevalent initial presenting symptom of glioma patients. The pathophysiology of headaches is thought to be caused by tumor development, which causes a mass impact on surrounding tissue. The mass effect, in turn, causes pressure in the microvasculature, which causes edema. The mass effect causes signs of a brain tumor depending on the location of the tumor in the brain.

Frontal lobe tumors, for example, might cause behavioral disorders, whereas dominant temporal lobe tumors can cause receptive speech impairments. Other symptoms of mass effects include nausea, vomiting, and visual changes. Seizures are the second most prevalent presenting symptom. Seizures are caused by tumor irritation of the cerebral cortex, which results in localized or widespread seizures.

Other symptoms of gliomas include tingling, weakness, and difficulties ambulating. In rare circumstances, patients may appear in a comatose condition due to bleeding inside the tumor, resulting in an acute herniation syndrome.

Gliomas have been revealed to have a number of acquired (rather than inherited) genetic alterations. Early in the illness, the tumor suppressor protein 53 (p53) is mutated. p53 is the "guardian of the genome," ensuring that the DNA is replicated correctly during DNA and cell duplication and destroying the cell (apoptosis) if the DNA is altered and cannot be repaired. Other mutations can persist when p53 is altered.

Another tumor suppressor gene, phosphatase and tensin homolog (PTEN), is deleted or altered. The epidermal growth factor receptor, a growth factor that typically encourages cell division, is increased and causes cells to divide excessively. These mutations, when combined, cause uncontrollable cell division, which is a characteristic of cancer. Mutations in IDH1 and IDH2 were discovered to be part of the process and associated with a poor prognosis.

Who is at risk of getting a Glioma? 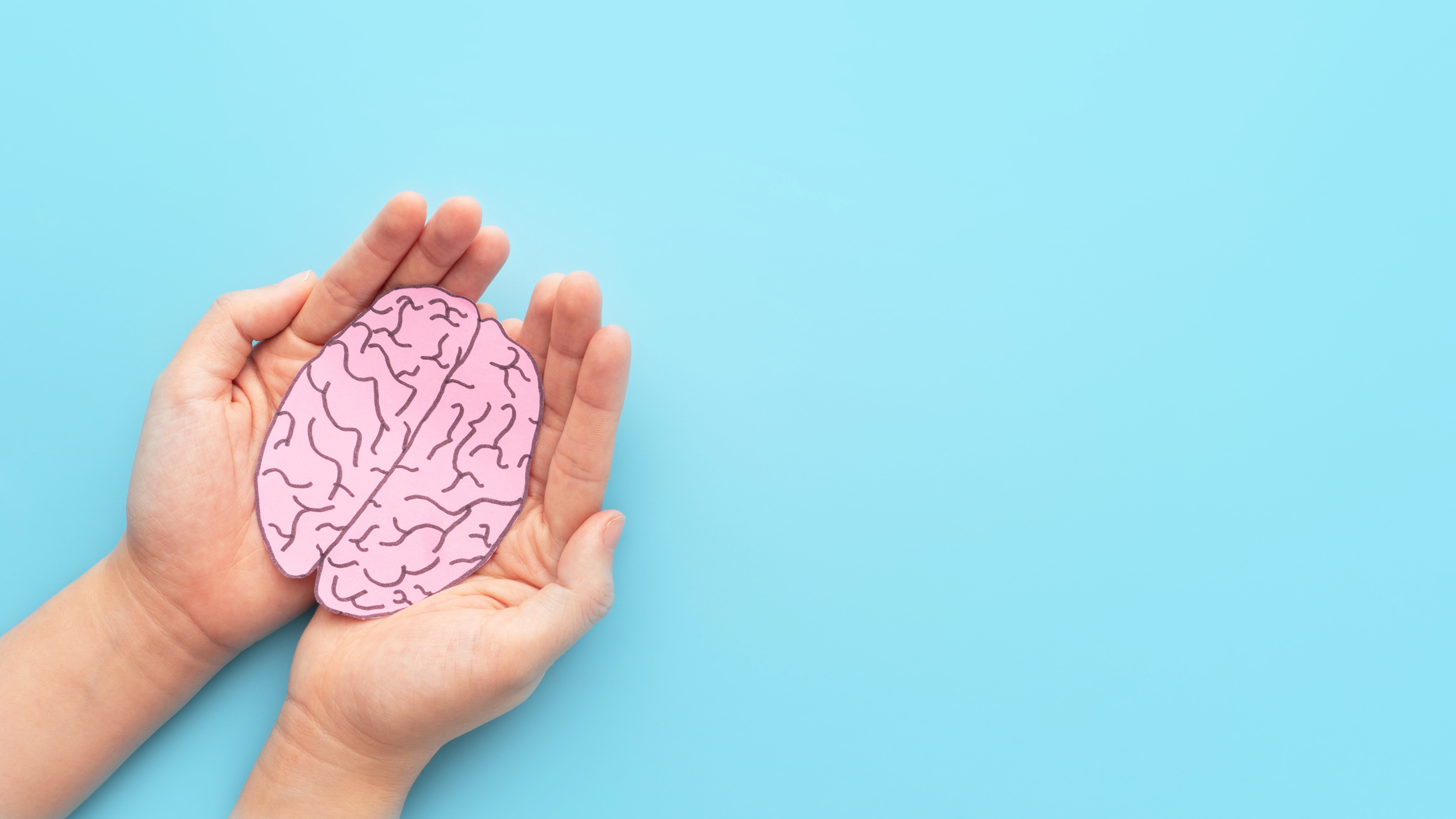 Anyone can develop a glioma, but the following factors may increase your risk: 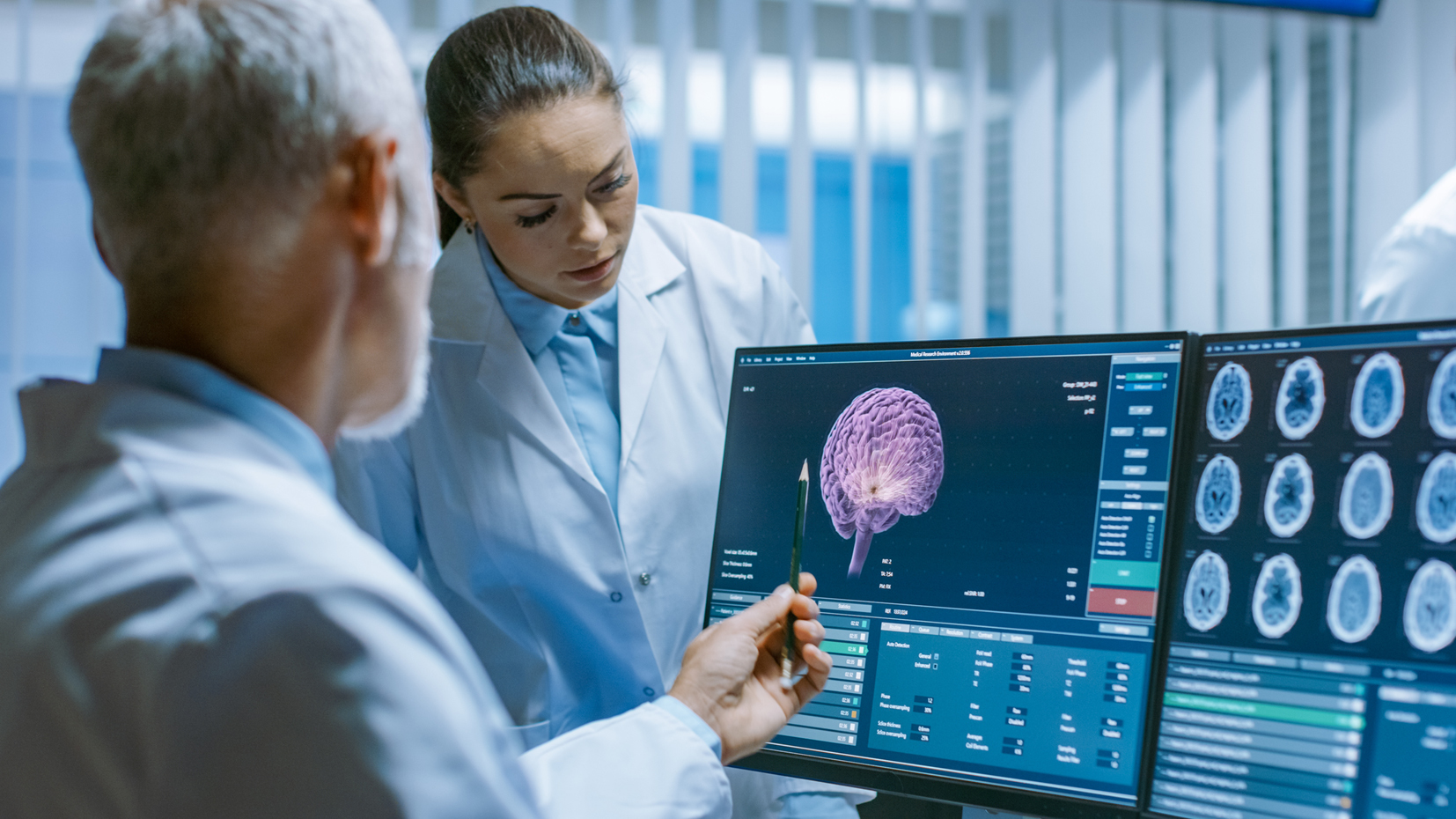 The precise causes of gliomas are unknown. Hereditary disorders such as neurofibromatoses (types 1 and 2) and tuberous sclerosis complex have been linked to their development. Different oncogenes can work together to cause gliomas.

Some dietary and vitamin supplementation studies appear to suggest that dietary N-nitroso compounds may impact the risk of both childhood and adult brain cancers. In certain investigations, researchers discovered that brain tumor patients (or their mothers) ingested more cured foods (also known as Curing) than control groups. Adults with glioma were more likely to eat a diet high in cured foods and low in vitamin C-rich fruits and vegetables, as well as a diet high in nitrites and low in vitamin C. The impact was stronger in males than in women.

There is no clear evidence of a relationship between gliomas and electromagnetic radiation from cell phones. It was thought to be conceivable, despite the fact that various large studies found no conclusive evidence, as stated by the NIH's National Cancer Institute.

However, more research is being conducted to obtain more robust evidence and confirm that there is no relationship (the most recent press release from the NIH's National Institute of Environmental Health Sciences discussed an ongoing study with mildly positive results, though it appears that there may have been issues with the control group dying prematurely).

Some investigations have found that glioblastomas are infected with CMV, raising the possibility that this may accelerate tumor formation. However, this is a contentious viewpoint, as subsequent in-depth investigations have failed to demonstrate a link between viral infection and glioma development. Previous research may possibly have been influenced by false-positive antibody staining artifacts, according to evidence.

Glioma risk is increased by germ-line (inherited) polymorphisms in the DNA repair genes ERCC1, ERCC2 (XPD), and XRCC1. This suggests that gliomas are formed as a result of altered or inadequate repair of DNA damage. DNA damage is a probable significant primary cause of cancer development in general.

Excessive DNA damage can result in mutations via translesion synthesis. Incomplete DNA repair can also result in epigenetic changes or epimutations. Such mutations and epimutations may provide a cell a proliferative advantage, which can eventually lead to cancer growth through natural selection.

Though some studies have found that farmers had a greater risk of glioma than the general population, exposure to farm animals or manure is not linked to glioma. Later studies have not shown a link between farming and gliomas; similarly, conflicting data exists between teachers and glioma. Architects, surveyors, retail employees, butchers, and engineers have greater incidences of gliomas, according to more consistent statistics. The majority of investigations have concluded that pesticide exposure is unlikely to be a cause of glioma, while a small number of studies have identified a link. 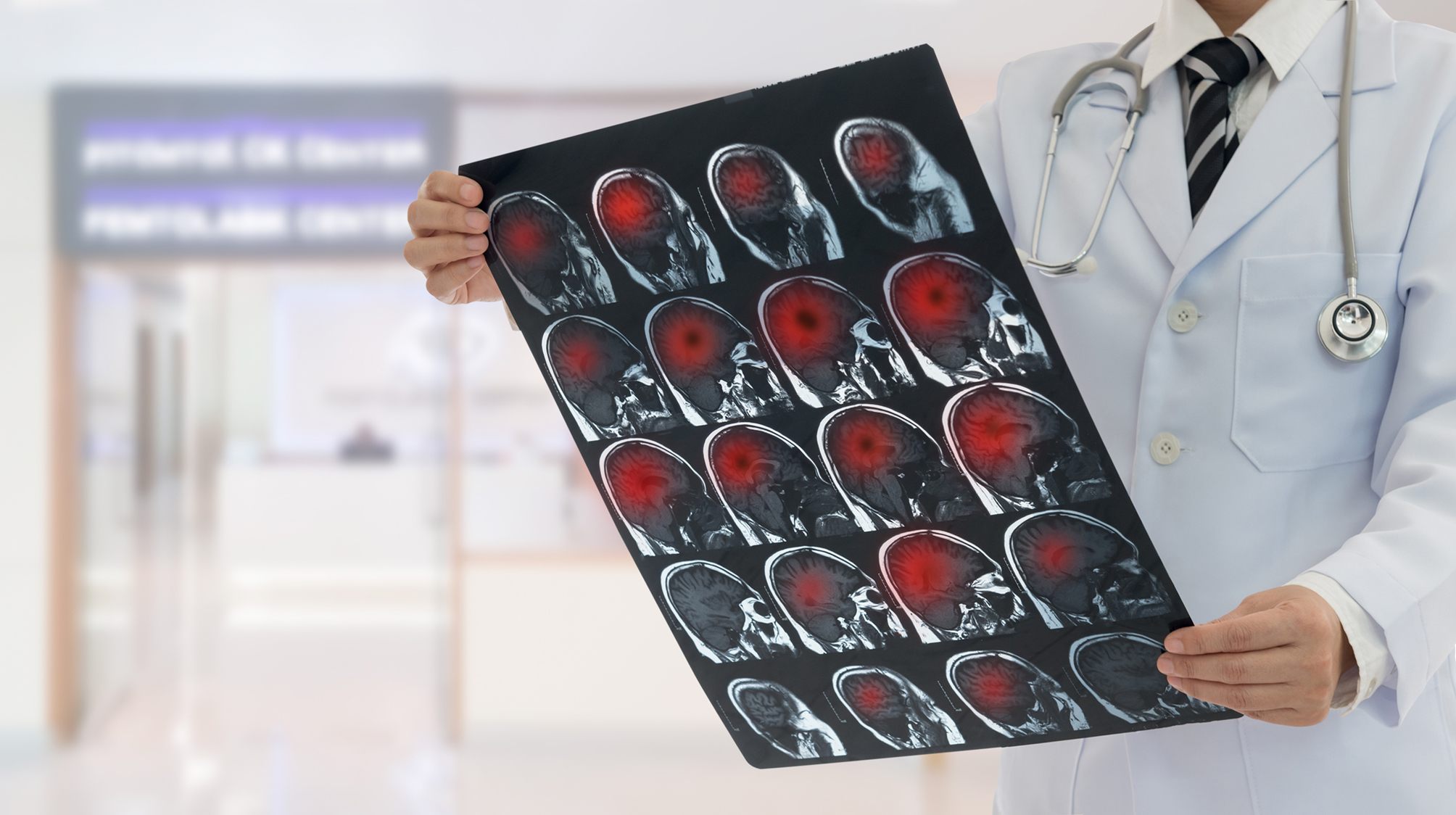 Gliomas are categorized into three categories based on phenotypic cell characteristics: astrocytomas, ependymomas, and oligodendrogliomas. Based on cell shape, mitotic activity, and molecular marker, these cell gliomas are further categorized as low grade, atypical, and high grade tumors. The World Health Organization (WHO) grading system makes use of molecular markers that have been found to have predictive and therapeutic consequences. Gliomas are classified by cell type, by grade, and by location:

By type of cell:

Gliomas are named according to the specific type of cell with which they share histological features, but not necessarily from which they originate. The main types of glioma are:

Gliomas are further classified based on their grade, which is determined by pathologic analysis of the tumor. The WHO Classification of Tumors of the Central Nervous System is used for the neuropathological examination and diagnosis of brain tumor specimens.

The World Health Organization (WHO) grading system for astrocytoma is the most frequent, with tumors rated from I (least progressed disease—best prognosis) through IV (most advanced disease—worst prognosis).

Gliomas are classed based on whether they are located above or below the tentorium, a membrane in the brain. The tentorium is the space that separates the cerebrum (above) from the cerebellum (below).

Signs and symptoms of Gliomas 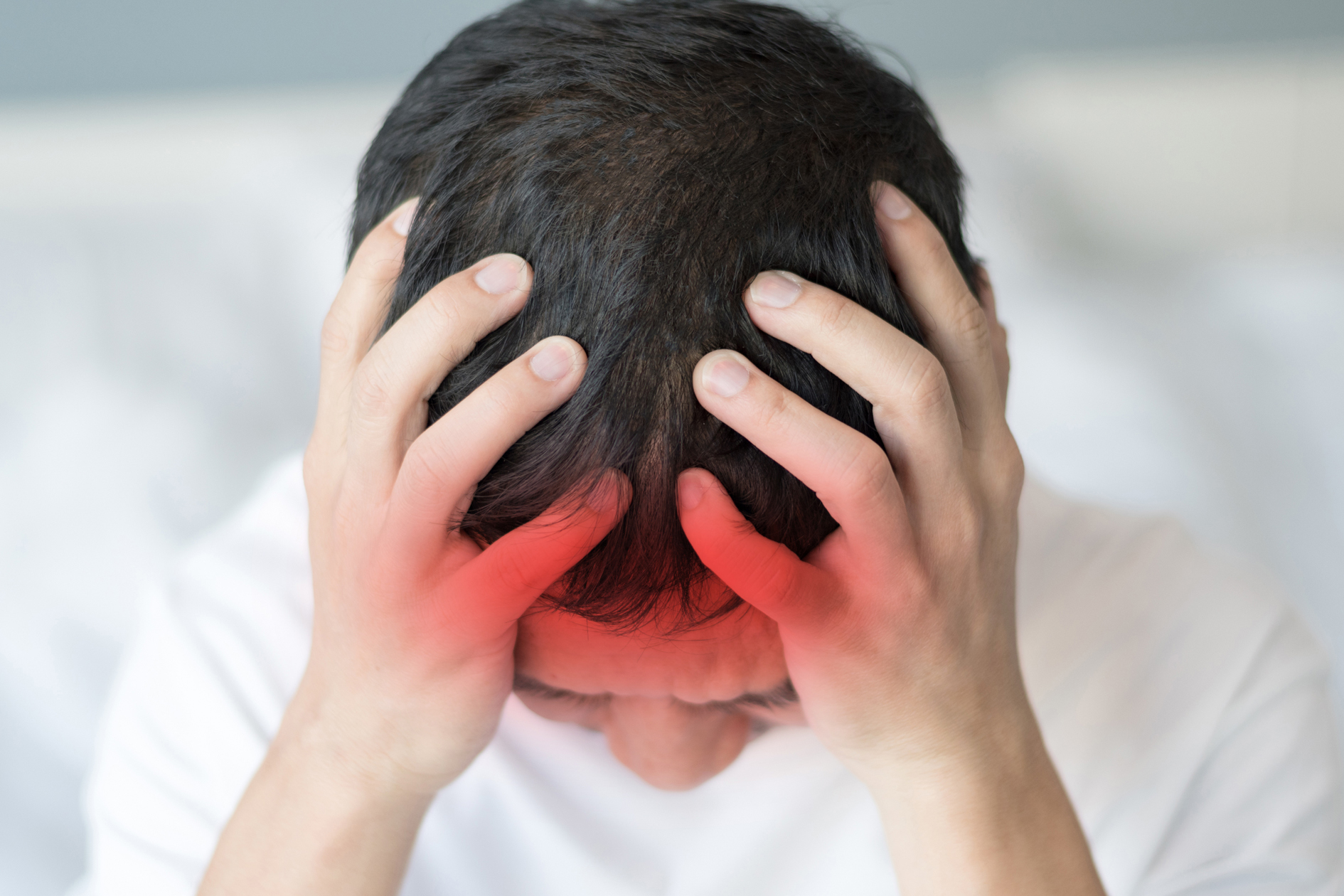 The most frequent symptoms of brain gliomas include headaches, nausea, vomiting, seizures, and, in more advanced instances, weakness or altered mental state. The neurological examination of these individuals may be normal or may show various degrees of focal weakness, sensory impairments, or, in a severe case, changed mental state due to an acute mass effect caused by tumor enlargement.

Evaluation of patients with Brain Gliomas

In the setting of a history and physical examination that imply brain tumors, the following imaging tests are appropriate:

How Brain Gliomas are treated? 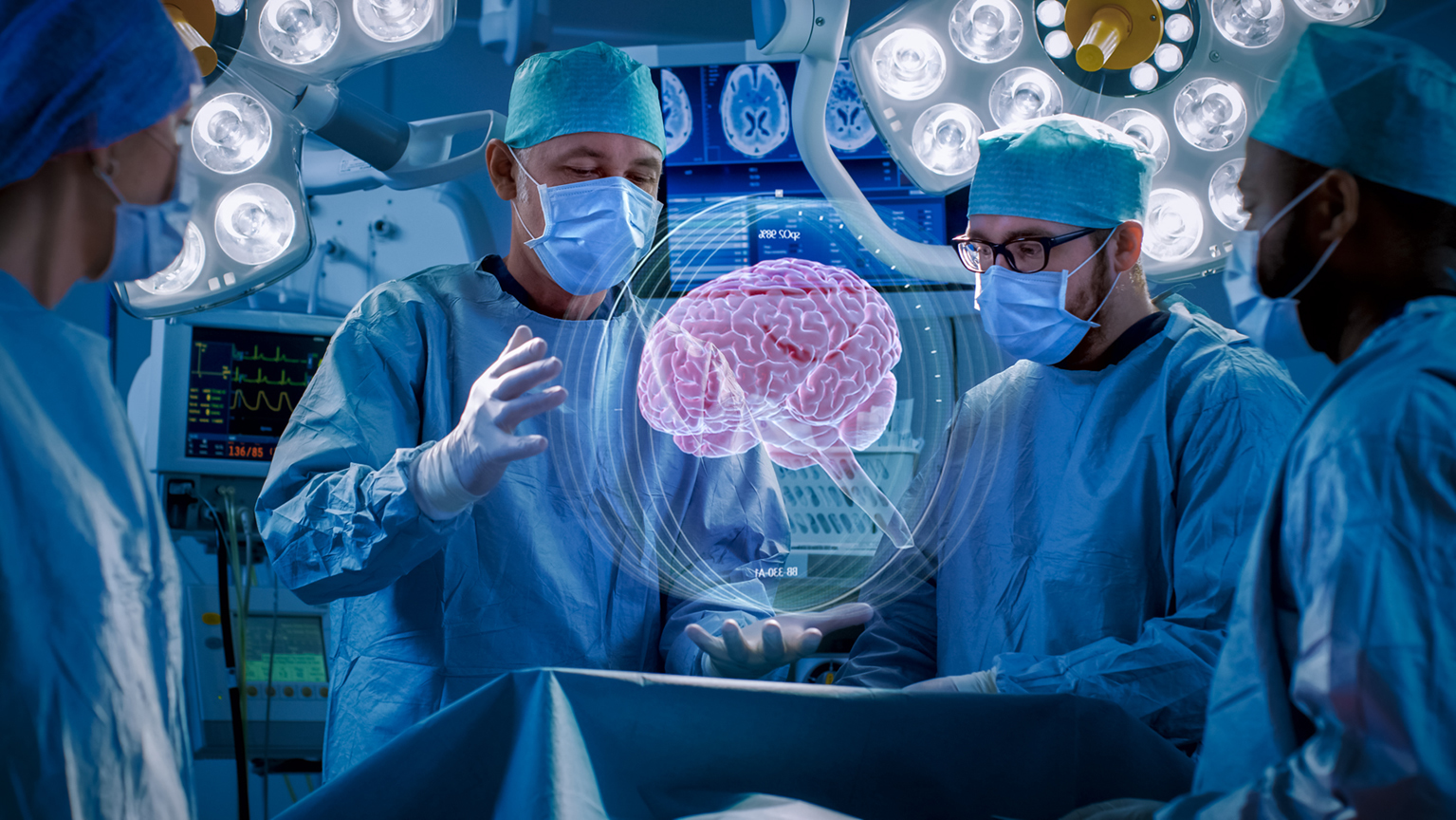 The treatment for brain gliomas is determined on the location, cell type, and degree of malignancy. Treatment is frequently a combination of surgery, radiation therapy, and chemotherapy. Treatment with radiation and concurrent temozolomide resulted in a longer survival time.

Radiation therapy can take the form of external beam radiation or a stereotactic radiosurgery method. Spinal cord tumors can be treated surgically and with radiotherapy. Temozolomide is a chemotherapeutic medication that may be conveniently delivered in an outpatient environment and successfully crosses the blood–brain barrier. Some gliomas may benefit from immunotherapy treatment.

Recent trials have used angiogenic blockers such as bevacizumab in conjunction with conventional chemotherapy to treat recurrent high-grade glioma, with promising outcomes. 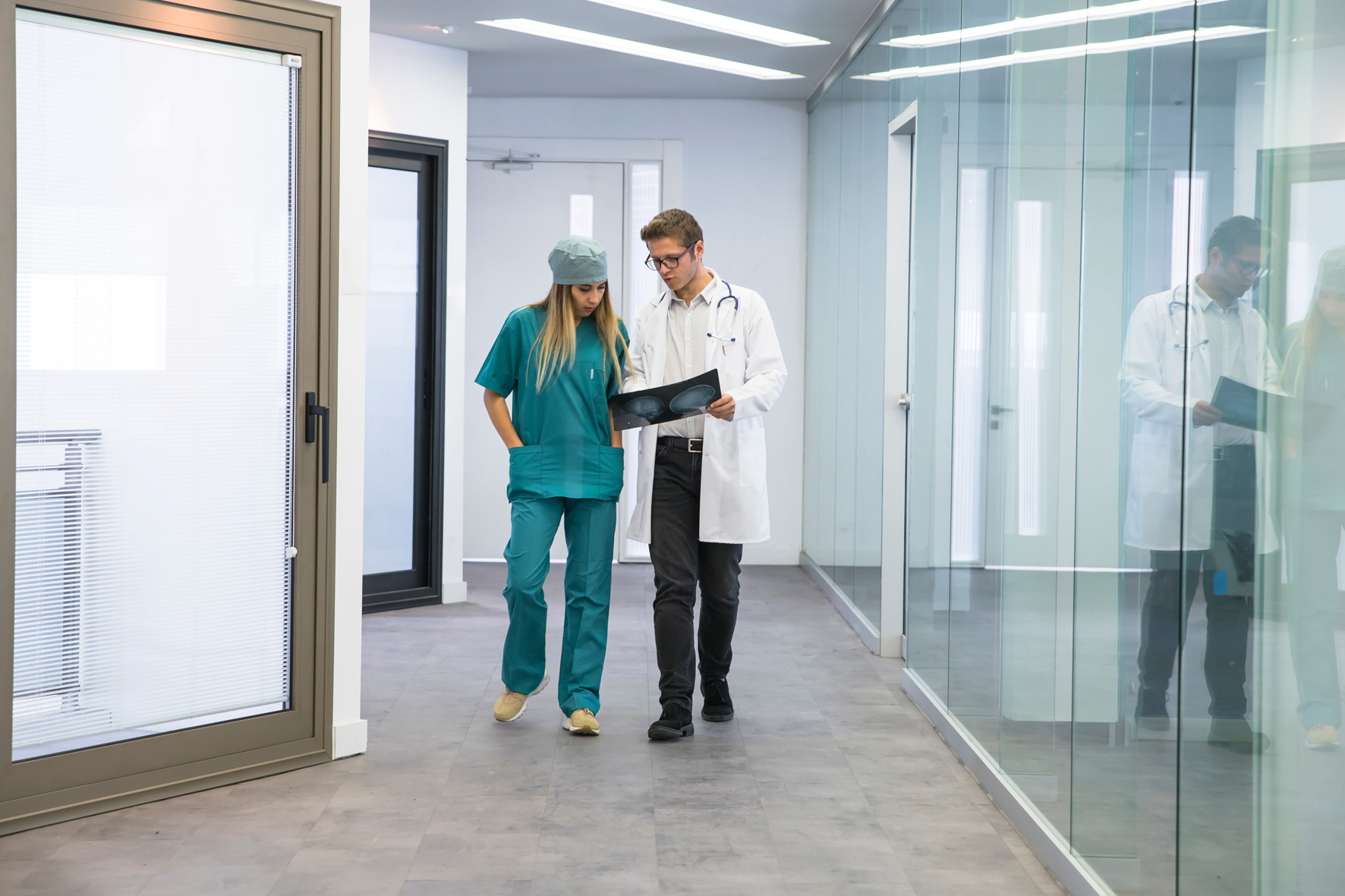 The prognosis of gliomas is determined by the grade (as determined by the World Health Organization classification) of the tumor with which the patient presents. Any tumor that is beyond WHO grade I (i.e. a malignant tumor as opposed to a benign tumor) usually has a prognosis of mortality that ranges from years (WHO grade II/III) to months (WHO grade IV). Prognosis can also be offered based on cellular subtype, which may have an effect on prognosis.

The prognosis for low-grade cancers is slightly better. Low-grade glioma patients are 17 times more likely to die than comparable individuals in the general population. The age-adjusted 10-year relative survival rate was 47%. One research found that individuals with low-grade oligodendroglioma have a median life of 11.6 years, while another found a median survival of 16.7 years. Unfortunately, 70% of low-grade (WHO grade II) tumors will develop to high-grade tumors within 5–10 years.

Diffuse intrinsic pontine glioma predominantly affects children, most of whom are between the ages of five and seven. DIPG has a median survival duration of less than 12 months. Surgery to remove the tumor is typically not possible or advised in the case of DIPG. These tumors, by definition, infiltrate the brain stem in a diffuse manner, developing between normal nerve cells. Aggressive surgery might severely harm neurological structures necessary for arm and leg movement, eye movement, eating, breathing, and even consciousness. 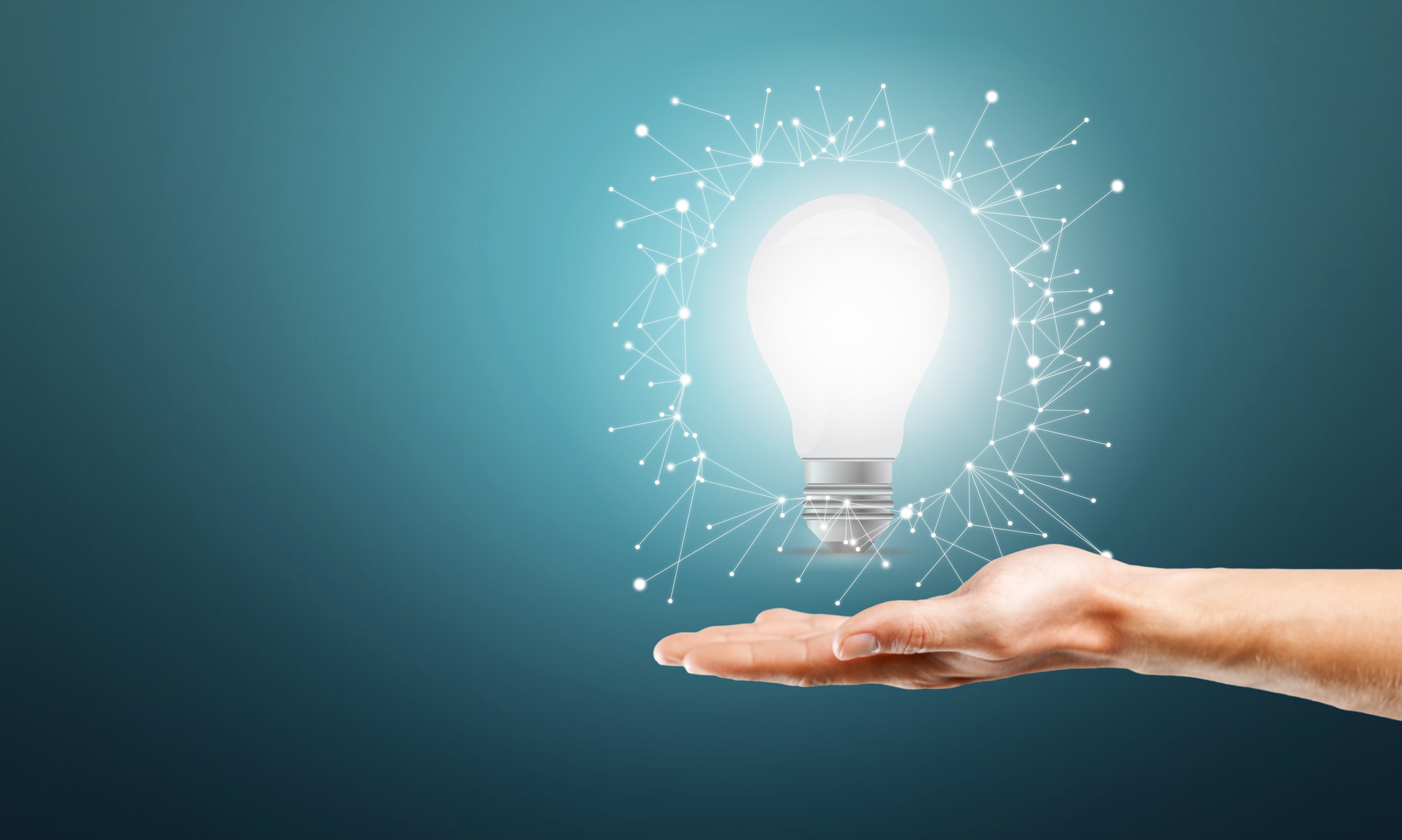 Gliomas are tumors that begin in the glial cells of the brain or spine. Gliomas account for around 30% of all brain and central nervous system cancers, and 80% of all malignant brain tumors.

According to research, alterations in DNA cause the development of brain and spinal cord malignancies such as gliomas.  Cells are given instructions on how to develop and reproduce. Mutations, or alterations to the DNA in our genes, can cause cells to proliferate uncontrollably.

Patients suffering from this condition may exhibit non-specific symptoms and signs such as aphasia, cognitive issues, difficulty walking, dizziness, headaches, weakness or numbness on one side of the body), nausea and vomiting, personality or behavioural abnormalities, and even seizures.

In the presence of a history and physical examination suggestive of brain tumors, CT and MRI are the imaging modalities of choice.

For the majority of individuals, surgery is the first line of therapy for a glioma. If the tumor is easily accessible, a surgeon may be able to remove it altogether. Gliomas, on the other hand, can be difficult to entirely remove, especially in difficult-to-reach or fragile parts of the brain.