A hysterectomy refers to the surgery that takes out the uterus, ending the menstruation and the capacity to get pregnant. A hysterectomy may be done for a variety of reasons. It can be used to address different chronic pain issues, including some forms of cancer and infections.

Depending on the purpose of the surgery, the degree of a hysterectomy can vary. The uterus is usually removed in its whole in some instances. The doctor can only take out the uterus while leaving the cervix intact or sometimes remove both the uterus and cervix. In addition, the doctor may remove the ovaries and fallopian tubes during the treatment. 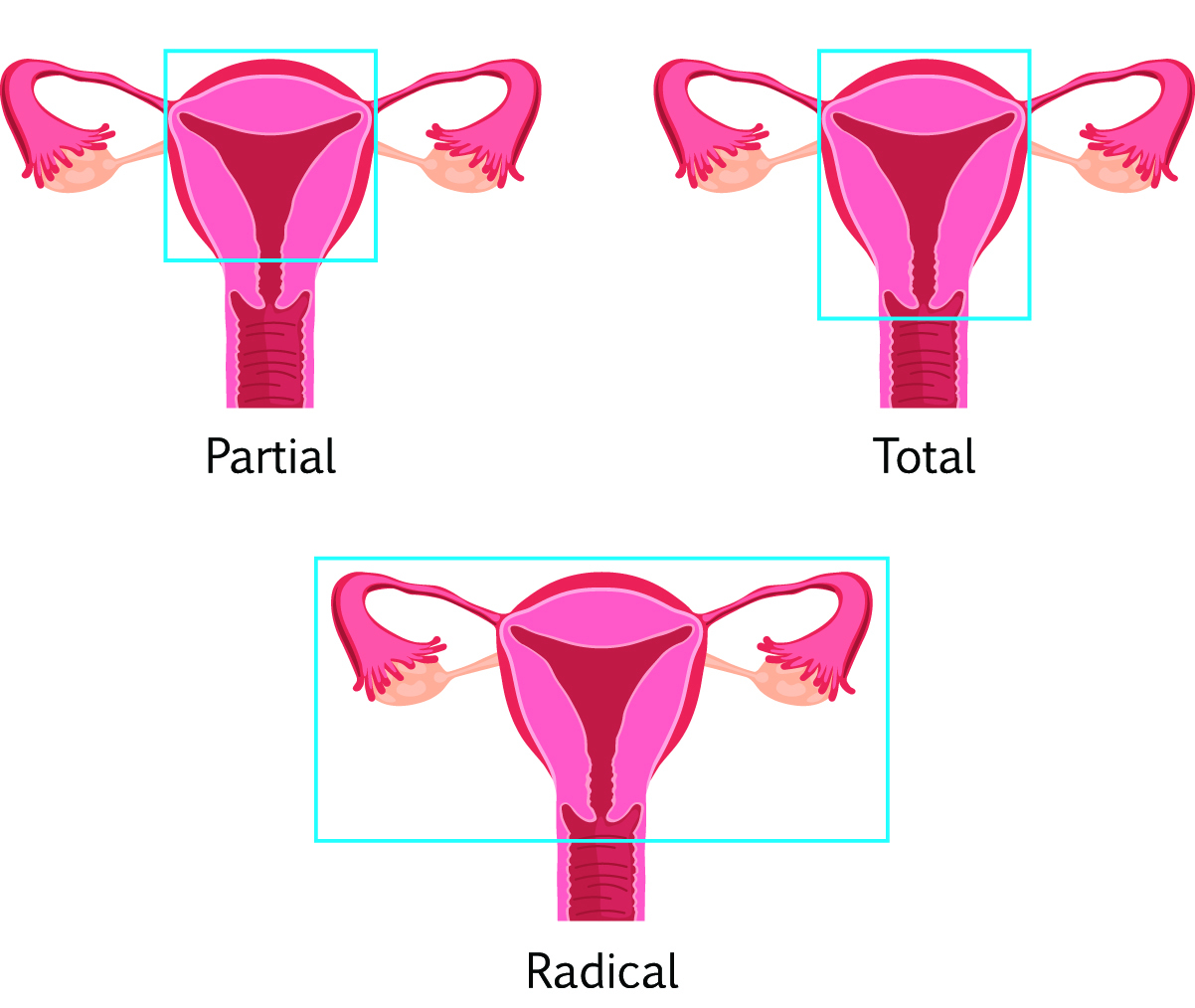 The common types of hysterectomy include;

Partially hysterectomy: The physician only removes a section of the uterus during a partial hysterectomy. They might leave the cervix in place.

Total hysterectomy: This involves the removal of the whole uterus as well as the fundus (the region of the uterus over the fallopian tube openings) and the cervix while leaving the ovaries intact.

Hysterectomy with bilateral oophorectomy: Apart from the uterus, one or the two ovaries, as well as the fallopian tubes, may be removed during this procedure.

A radical hysterectomy: The cervix, uterus, the upper part of the vagina, most of the tissue surrounding the cervix within the pelvic cavity, and the pelvic lymph nodes are all removed during this procedure. Doctors can perform the operation in certain cancer cases.

Supracervical hysterectomy: This is a type of hysterectomy to remove the upper portion of the uterus while the cervix remains intact.

Why is Hysterectomy performed?

The following conditions may require a hysterectomy:

Gynecologic cancer: A hysterectomy might be the best treatment alternative for patients with gynecologic cancer, including uterus or cervix cancer. Other options may include chemotherapy or radiation therapy, based on the type of cancer you have and the extent it has progressed.

Endometriosis: This is a condition in which the tissue that lines the inside of the uterus (endometrium) develops on the ovaries, fallopian tubes, or other pelvic or abdominal organs outside of the uterus. If medicine and conservative surgery don't help, you may require a hysterectomy for endometriosis. It basically includes removing the fallopian tubes and ovaries (bilateral salpingo-oophorectomy).

Fibroids: Fibroids are noncancerous uterine tumors that typically cause recurrent bleeding, pelvic pain, anemia, or bladder pressure. They may only be treated through a hysterectomy for fibroids. Fibroid nonsurgical therapies are an option based on your level of discomfort and the tumor size. Most women who have fibroids experience only minor symptoms and do not need any treatment.

Prolapse of the uterus: If the supportive ligaments, as well as tissues deteriorate, the uterus might descend into the vagina. Urinary incontinence, pelvic discomfort, and bowel movement difficulties can all occur due to uterine prolapse. A hysterectomy could thus be required to address the conditions.

Chronic pelvic pain: For women who have chronic pelvic pain in the uterus, surgery may be required as a final resort. A hysterectomy, on the other hand, does not provide relief from many types of pelvic discomfort. Besides, an unwanted hysterectomy can lead to new issues. Therefore, before undergoing such a procedure, have a thorough examination.

Abnormal bleeding of the vagina: If other treatments cannot manage vaginal bleeding and your periods are irregular, heavy, or extended in every cycle, a hysterectomy may provide relief.

What Happens before Hysterectomy Procedure?

The physician will discuss with you in detail the hysterectomy procedure and any potential risks and adverse effects. Also, he or she will respond to all your inquiries as well as any concerns.

Furthermore, you should expect the following;

How Hysterectomy Procedure is done

The doctor can perform a hysterectomy in a variety of methods. General or local anesthesia is necessary for all techniques.

The procedures of conducting a hysterectomy include;

The doctor will create a big incision in the abdomen during an abdominal hysterectomy and take out the uterus. The incision might be horizontal or vertical. These two types of cuts have a good proclivity for healing and leaving a small scar.

A vaginal hysterectomy involves removing the uterus via a small incision created on the inside of the vaginal. Doctors often use this procedure in situations such as uterine prolapsed or if the vagina corrections are required for associated disorders. There will be no apparent scars because the procedure does not involve any external cuts.

A laparoscopic hysterectomy is performed with the help of a tiny instrument known as a laparoscope. It is a long, narrow tube that has a front-mounted high-intensity light and a high-resolution camera.

The practitioner will implant the laparoscope through abdominal incisions. Instead of one huge incision, about three or four tiny ones are created. After getting a clear view of the uterus, he or she will break it into minute pieces and take them out one at a time.

The type of cut or incision made on the surgical area will depend on various factors such as;

In most cases, the doctor will conduct a hysterectomy for large fibroids, endometriosis, and gynecological tumors via a vertical incision.

You will spend about two to five days in the medical facility after the hysterectomy procedure. During this period, the healthcare team will provide pain medication while keeping an eye on the crucial signs, like heart rhythm and breathing.

The care team may also advise you to take a walk within the hospital setting as early as possible. These walks will help prevent the formation of blood clots in your legs.

If you undergo a vaginal hysterectomy, you will have gauze packed in the vagina to help manage the bleeding. This gauze will be removed after a few days following the operation. On the other hand, you might experience brown or bloody drainage coming from the vagina for up to ten days. You can thus wear a menstrual pad to avoid staining your clothes.

The doctor will recommend that you keep on walking around once you go back home. For instance, you can consider walking inside the house or even around the neighborhood. In addition, you should refrain from doing the following activities as you recover;

For laparoscopic and vaginal hysterectomy, you will likely resume most of the daily activities after three or four weeks. If you have undergone an abdominal hysterectomy, then the healing duration will take longer. However, you should recover completely in four to six weeks.

Risks and Complications of Hysterectomy

Generally, a hysterectomy is a safe surgical procedure. But just like all the other major surgeries, it is associated with several risks and complications. The common possible risks for some people include; 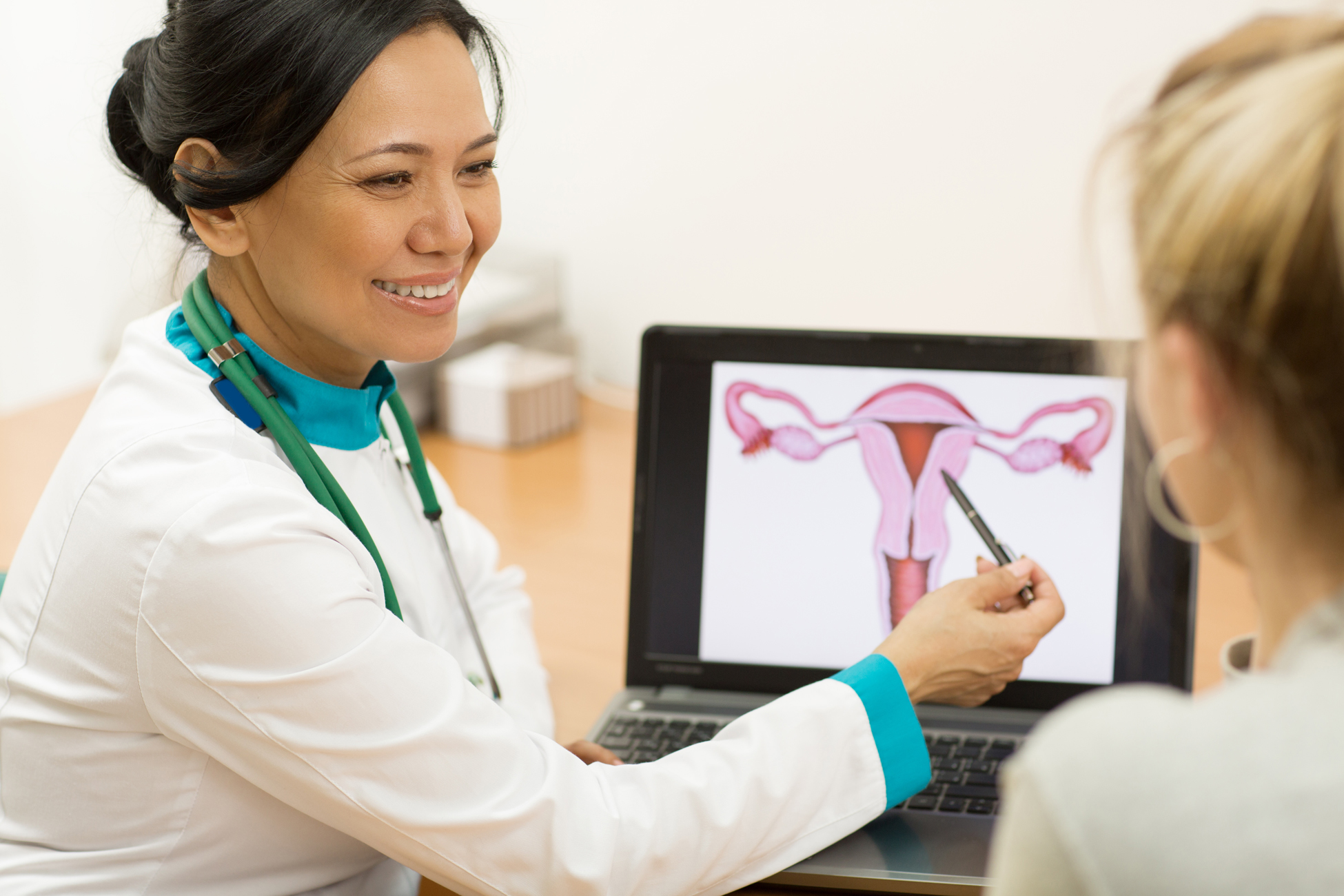 Hysterectomy is typically among the most prevalent surgeries done on women. Apart from being a safe procedure, it’s also considered a low-risk approach. Nonetheless, a hysterectomy might not always be the best alternative for all women.

Therefore, one should not undergo the procedure if she still wishes to have babies. This is unless there are no other available options. Fortunately, there are different treatment options for most of the conditions treated through a hysterectomy. For instance, the doctor can treat fibroids using other surgical procedures that do not affect the uterus. They can also address endometriosis with hormonal therapy.

However, in some cases, a hysterectomy is considered the best option. It is the only alternative for addressing cervical or uterus cancer. Your physician will thus discuss with you the available options and help determine the suitable one based on your condition.

Hysterectomy involves surgical removal of the uterus or womb, either with or without the cervix. It can also include removing the ovaries and the fallopian tube depending on the extent of the damage and the reason for the procedure.

Doctors can recommend hysterectomy for benign conditions if other treatment options are not successful. However, you will no longer have your menstrual periods or get pregnant after this procedure.