Myasthenia gravis is a neuromuscular condition that affects the neuromuscular junction. It appears as broad muscular weakness, which can affect the breathing muscles and result in a myasthenic crisis, which is a medical emergency. 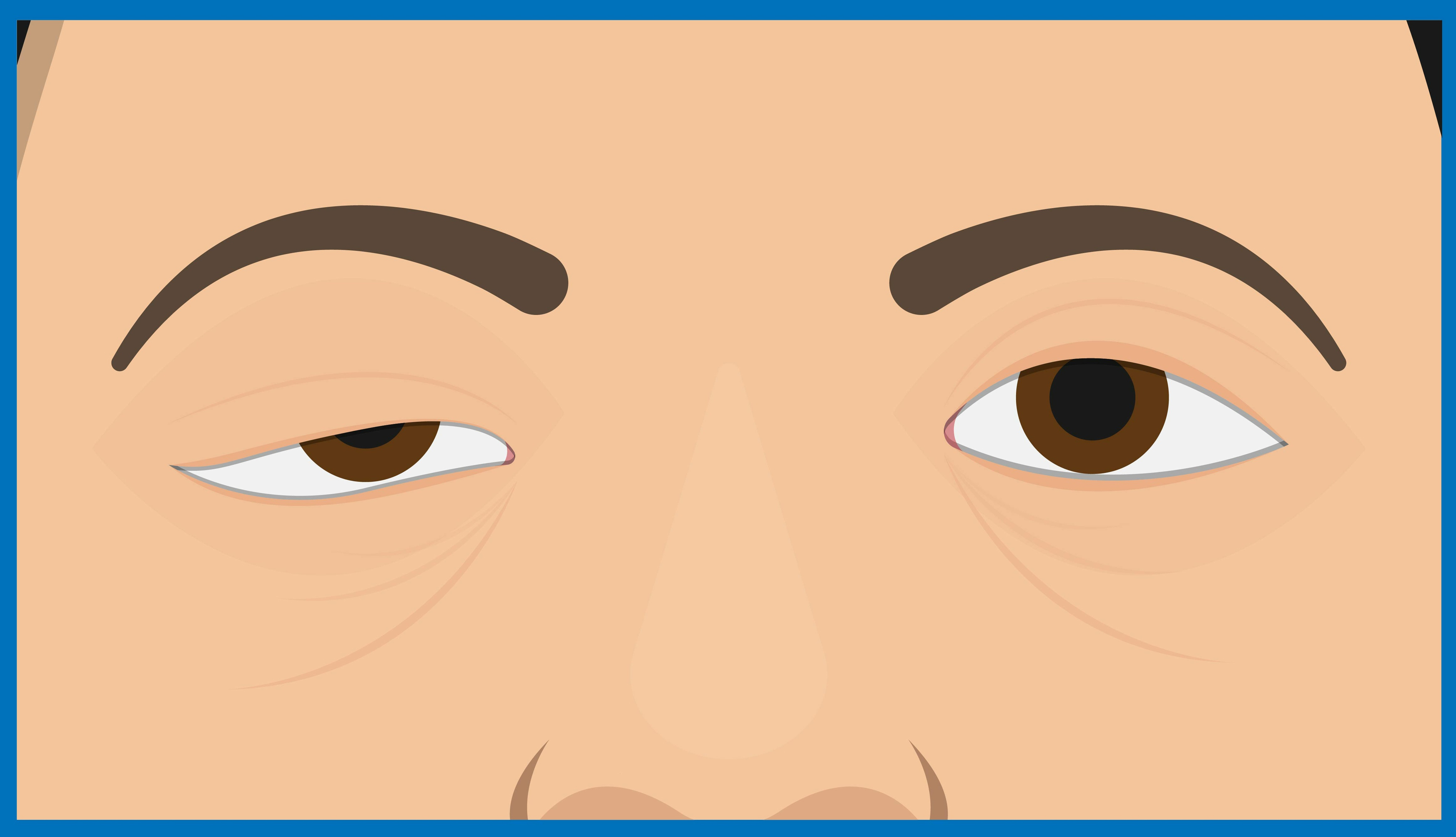 Myasthenia gravis (MG) is the most frequent condition affecting the skeletal muscles' neuromuscular junction (NMJ). The characteristic symptom is a fluctuating weakness that worsens in the afternoon. It often affects the muscles of the eyes, throat, and extremities. Muscle weakness results from the decreased passage of electrical impulses across the neuromuscular junction caused by the development of autoantibodies against certain postsynaptic membrane proteins. Infections, vaccination, surgery, and medicines are just a few of the things that might cause MG.

Myasthenia gravis is associated with a large range of problems. These include myasthenic crises, an acute respiratory paralysis that need urgent care, as well as long-term medication-related side effects such as opportunistic infections and lymphoproliferative cancers.

For improved patient care and results, a thorough knowledge of the pathophysiologic processes, clinical symptoms, therapeutic methods, and consequences of myasthenia gravis is required. 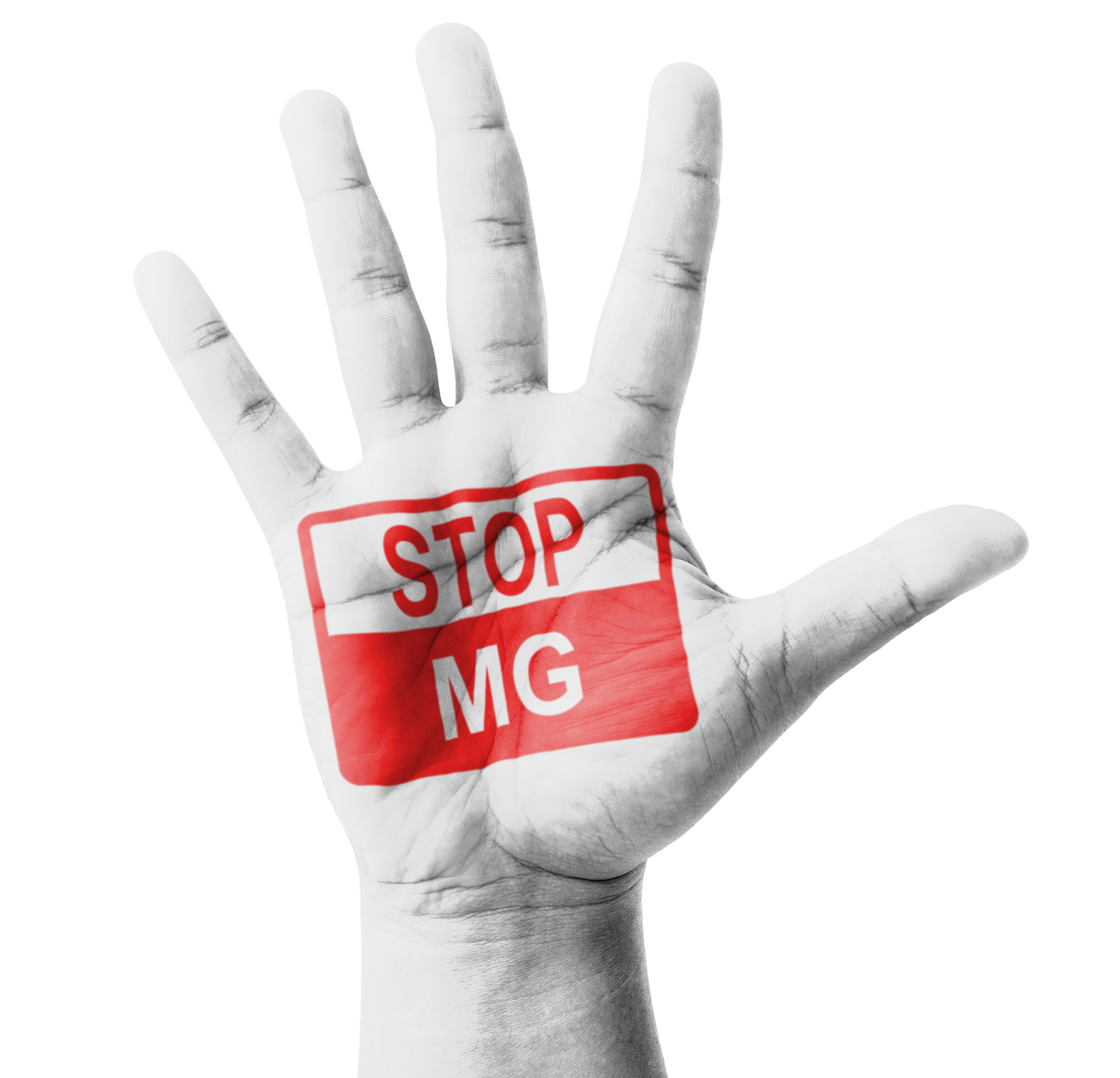 In the United States, the prevalence of myasthenia gravis is 20 per 100,000 people. It has a feminine majority in individuals under the age of 40 and a male predominance in those over the age of 50. Childhood MG is uncommon in Western societies, but it is widespread in Asian countries, with around half of patients under the age of 15 being affected. They are often characterized by indications of extraocular muscular weakness.

Myasthenia gravis, like other autoimmune illnesses, affects those who are genetically predisposed. Infections, vaccines, operations, and medicines are examples of precipitating causes.

The nicotinic acetylcholine receptors (n- AChR's), muscle-specific kinase (MuSK), and lipoprotein-related protein 4 are the most typically implicated proteins in the NMJ against which autoantibodies are formed (LPR4). A thymoma is seen in around 10% of MG patients and is linked to the generation of autoantibodies.

MG can be categorized into several subgroups based on the clinical characteristics and antibodies involved. Each group reacts differently to therapy and so has prognostic value: 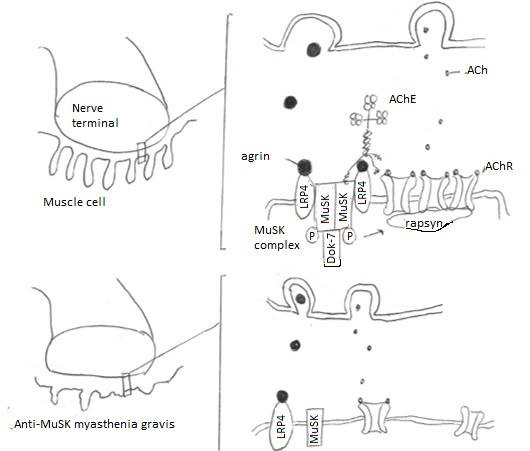 The kind of antibodies present influences the pathophysiologic pathways in MG.

The antibodies in n-AChR MG are of the IgG1 and IgG3 subtypes. They attach to the n-ACh receptor in the skeletal muscle postsynaptic membrane and activate the complement system, resulting in the development of the membrane attack complex MAC, which causes the receptors to be degraded. They may also work by functionally inhibiting ACh binding to its receptor or by increasing the endocytosis of the antibody-bound n-ACh receptor.

Due to a lack of n-ACh receptors, the ACh produced at the nerve terminal is unable to create the postsynaptic potential necessary to trigger an action potential in muscle, resulting in muscular weakening symptoms. Because frequent usage of a muscle group depletes the ACh storage in the NMJ, the weakening becomes more evident.

In current lab testing, around 15% of generalized MG patients do not exhibit anti-AChR antibodies. Antibodies to MuSK and another postsynaptic neuromuscular junction (NMJ) protein are identified in 40% of this subgroup. They exhibit uncommon clinical characteristics such as selective face, bulbar, neck, or respiratory muscular weakness with occasional significant muscle atrophy and relative sparing of the ocular muscles.

Respiratory crises are more prevalent when muscle groups such as the paraspinal and upper esophageal muscles are involved. It has also been observed that anticholinesterase drugs cause increased sensitivity, nonresponsiveness, or even clinical deterioration. With female preponderance, disease onset is sooner, and thymus histology is frequently normal.

Seronegative MG is characterized by the absence of both anti-AChR and anti-MuSK antibodies and comprises a clinically diverse group with exclusively ocular, moderate generalized, or severe generalized illness. Some individuals may have low-affinity anti-AChR antibodies that are undetectable with existing tests. In terms of clinical characteristics, pharmacological treatment response, and potentially even thymic abnormalities, they are virtually indistinguishable from individuals with anti-AChR antibodies.

These antibodies react with epitopes on the muscle proteins titin and ryanodine receptor, are associated with thymoma and late-onset myasthenia gravis, and may correlate with the severity of myasthenia gravis. These striational antibodies are typically present in the sera of MG patients and are only infrequently seen in AChR antibody-negative MG. 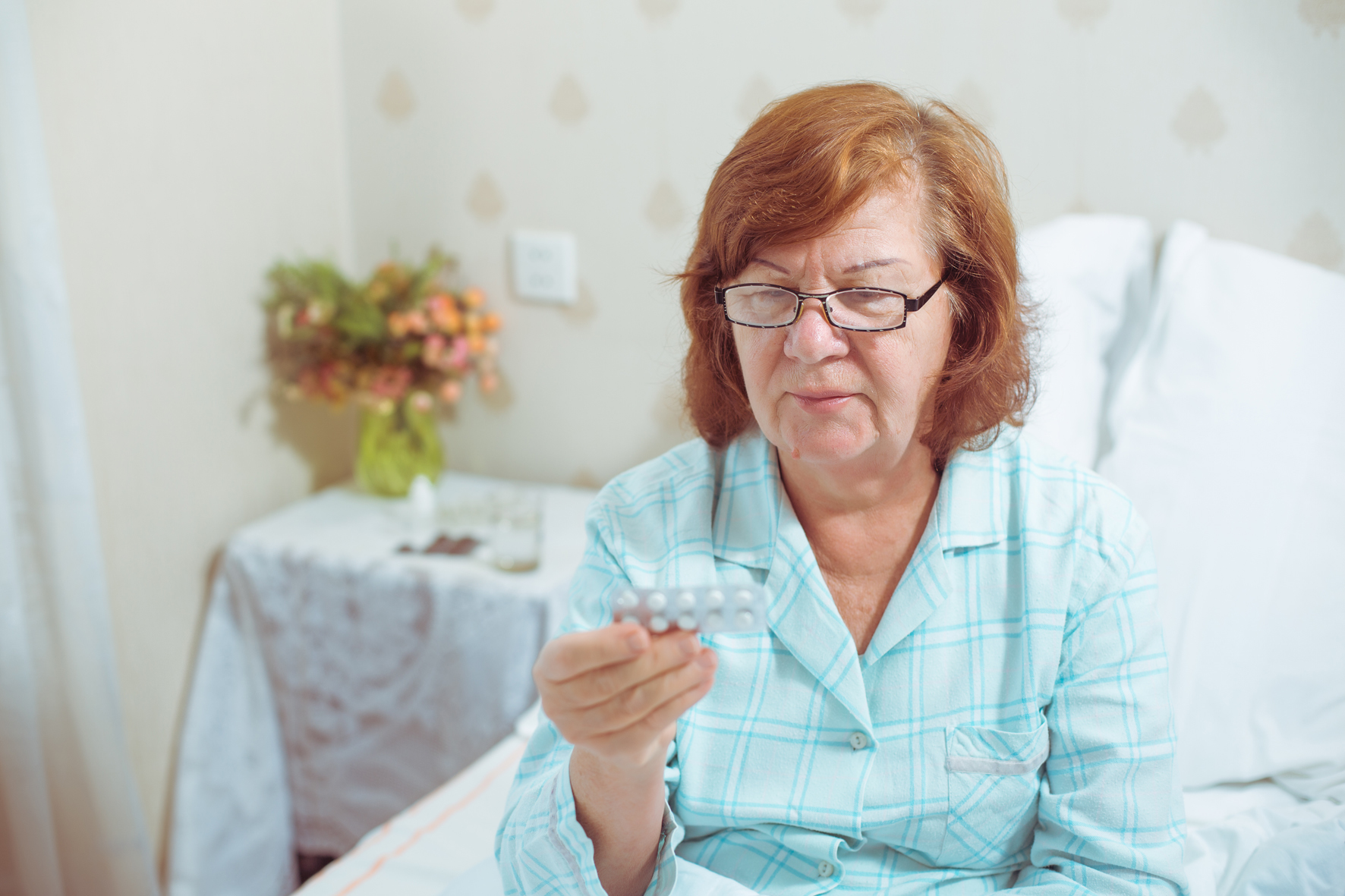 The variable muscular weakness that increases with physical exertion and recovers with rest is the clinical hallmark that distinguishes MG. Infections, surgery, vaccination, heat, mental stress, pregnancy, medicines, and the exacerbation of existing medical diseases can all cause it.

During the history-taking process, patients should be asked about the timing of the symptoms, when time of day the symptoms generally occur, and whether they improve with rest. Inquire about minor symptoms such as coughing after swallowing, taking longer to complete eating, hoarseness of the voice, easy fatiguability while ascending stairs, and sluggish and frequent errors in writing or typing; these symptoms are particularly noticeable at the end of the day or work shift.

The most common symptoms include the following:

Because MG exclusively affects nicotinic cholinergic receptors, there are no autonomic symptoms such as palpitations, bowel or bladder difficulties.

Because of the variable illness pattern, a physical examination may demonstrate normal muscular strength. Repeated or prolonged muscular contractions might reveal weakness in such instances. Rest or application of ice (ice-pack test) to the affected muscle group results in improvement. Pupil dilation, deep tendon reflexes, and sensory tests are all normal.

Ptosis can be unilateral or bilateral, fatigues with upgaze, and is generally induced by persistent upgaze for 30 seconds or more. If the ptosis is bilateral, it might completely obstruct vision.

The medial rectus is the most usually affected extraocular muscle. Typically, more than one extraocular muscle is weak with pupillary sparing on clinical examination. The weakness has no discernible pattern of nerve or muscle involvement, separating it from other illnesses such as vertical gaze paresis, oculomotor palsy, or internuclear ophthalmoplegia.

Clinical Classification: The clinical categorization of the Myasthenia Gravis Foundation of America (MGFA) separates MG into five primary divisions based on clinical characteristics and disease severity. Each class has a unique prognosis or response to therapy. 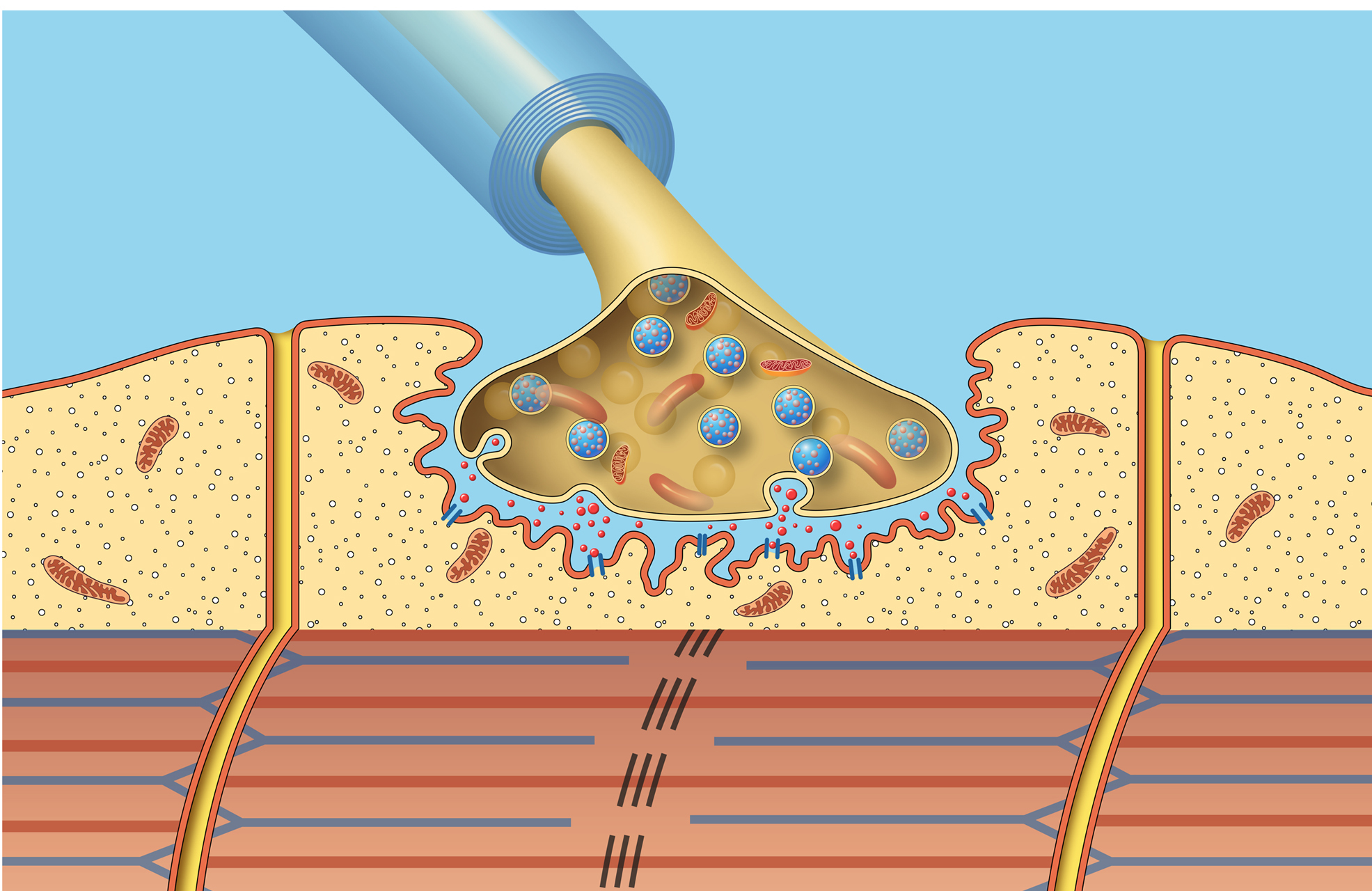 The diagnosis of MG is mostly clinical. The laboratory investigations and procedures usually aid the clinician in confirming the clinical findings.

The anti-AChR Ab test is very specific and confirms the diagnosis in individuals with traditional clinical symptoms. It is found in four-fifths of individuals with generalized MG but only in half of those with pure ocular MG. The remaining patients, about 5% to 10%, will have anti-MuSK antibodies.

Only a few rare cases have both anti-AChR and anti-MuSK antibodies been found in the same patient. Anti-LRP4 antibodies will be detected in 3–50% of the remaining individuals who are seronegative to either of these antibodies. Anti-striated muscle antibodies are found in 30% of MG patients. They are more helpful as a thymoma serologic marker, especially in younger individuals.

These are important in patients who test negative for antibodies. The repeated nerve stimulation (RNS) test and single-fiber electromyography are two commonly used tests for MG (SFEMG). Both tests examine the NMJ for conduction delays. Before doing these tests, routine nerve conduction investigations are routinely conducted to assess the function of the nerves and muscles.

Edrophonium is an acetylcholinesterase inhibitor with a short half-life that enhances the availability of ACh in the NMJ. This is especially important for ocular MG, where electrophysiologic testing is not possible. It is given intravenously, and the patient's symptoms of ptosis or diplopia are monitored for improvement. It has a sensitivity range of 71% to 95% for MG diagnosis.

When edrophonium testing is not possible, an ice-pack test can be used. This test necessitates the application of an ice pack to the eye for 2-5 minutes. Then, for any improvement in ptosis, an evaluation is performed. This test cannot be used to assess extraocular muscles.

Patients with MG should have a chest computed tomography (CT) or magnetic resonance imaging (MRI) to rule out thymoma. In cases of pure ocular MG, an MRI of the orbits and brain is required to rule out any localized mass lesions. 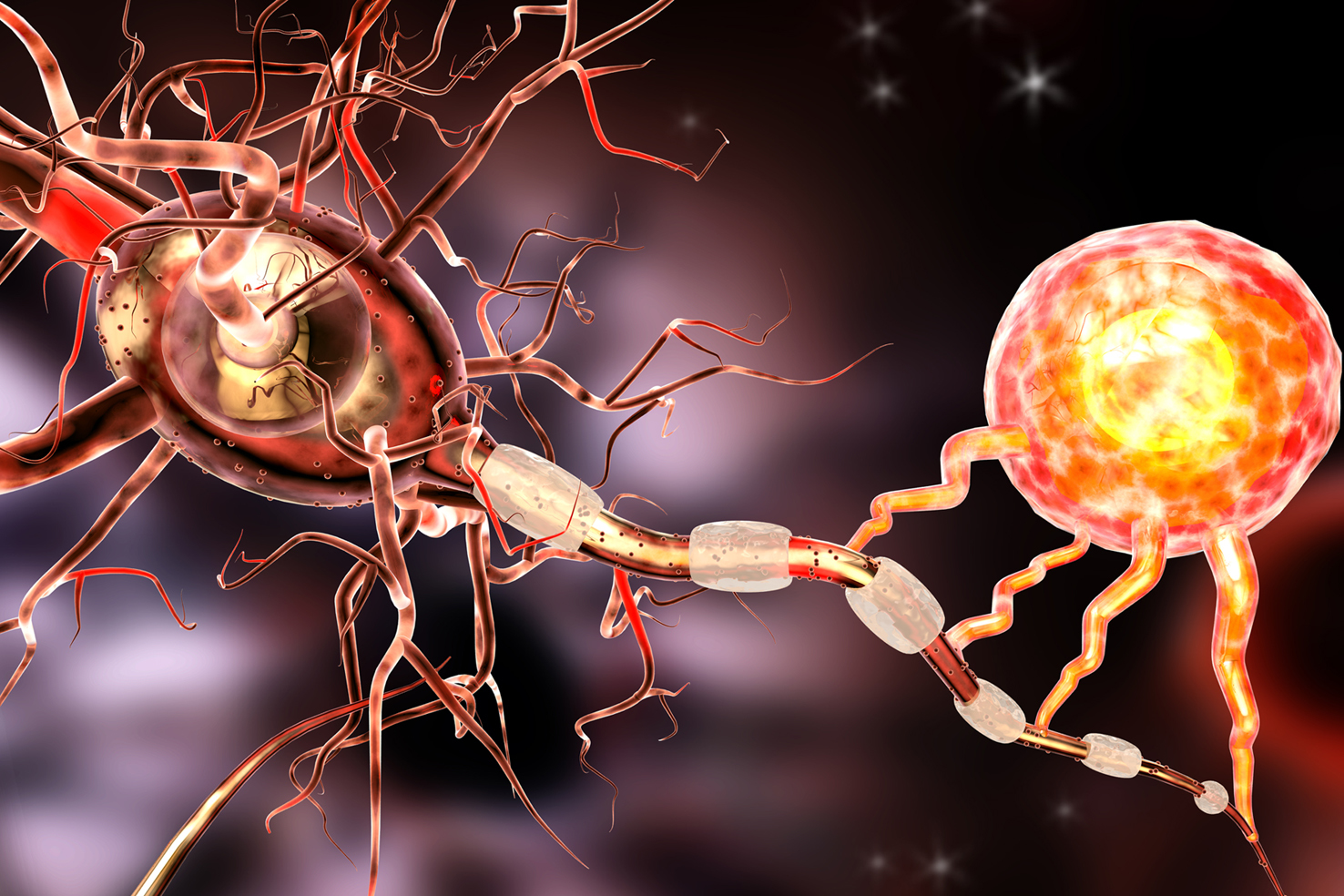 The treatment of MG should be tailored to the patient's specific needs and the severity of the condition. Based on the pathophysiology of the disease, there are two ways to managing MG. The first is to use an acetylcholinesterase inhibitor to increase the quantity of Cholinergic accessible to engage with the postsynaptic receptor, and the second is to use immunosuppressive drugs to decrease antibody binding to acetylcholine receptors.

There are four basic therapies used to treat MG:

Cholinesterase enzyme inhibitors and immunosuppressive medicines are the mainstays of MG therapy. Plasmapheresis or intravenous immunoglobulins can be utilized to treat symptoms that are resistant to initial treatment methods or those that require quick remission of symptoms (myasthenic crisis).

Management strategies in MG are based on the following four principles:

Symptomatic Treatment: Acetylcholinesterase inhibitors raise ACh levels at the NMJ by inhibiting enzymatic breakdown. Because of its extended duration of action, pyridostigmine bromide is favored over neostigmine. Ambenonium chloride can be utilized in those who have a bromide intolerance that causes gastrointestinal symptoms. Patients with MuSK MG have a poor response to these medications and may require greater doses.

Immunosuppressive Treatment: These are prescribed for people who continue to experience symptoms despite receiving pyridostigmine medication. The first-line immunosuppressive drugs used in the therapy of MG include glucocorticoids (prednisone, prednisolone, and methylprednisolone) and azathioprine. Cyclosporine, methotrexate, mycophenolate, cyclophosphamide, and tacrolimus are examples of second-line agents. When a patient is resistant to therapy, has a contraindication to treatment, or is intolerable to the use of first-line medications, they are utilized. Various monoclonal antibodies, including rituximab and eculizumab, have recently been used to treat drug-resistant MG, although clinical trial evidence on their effectiveness is still lacking.

Intravenous immunoglobulins (IVIG) / Plasmapheresis: This is advised during the perioperative phase to stabilize a patient before to an operation. It is also the therapy of choice for myasthenic crises due to its early start of action and is utilized in circumstances when immunosuppressive medications have failed.

This is indicated for the following:

The differential diagnosis for myasthenia gravis include the following: 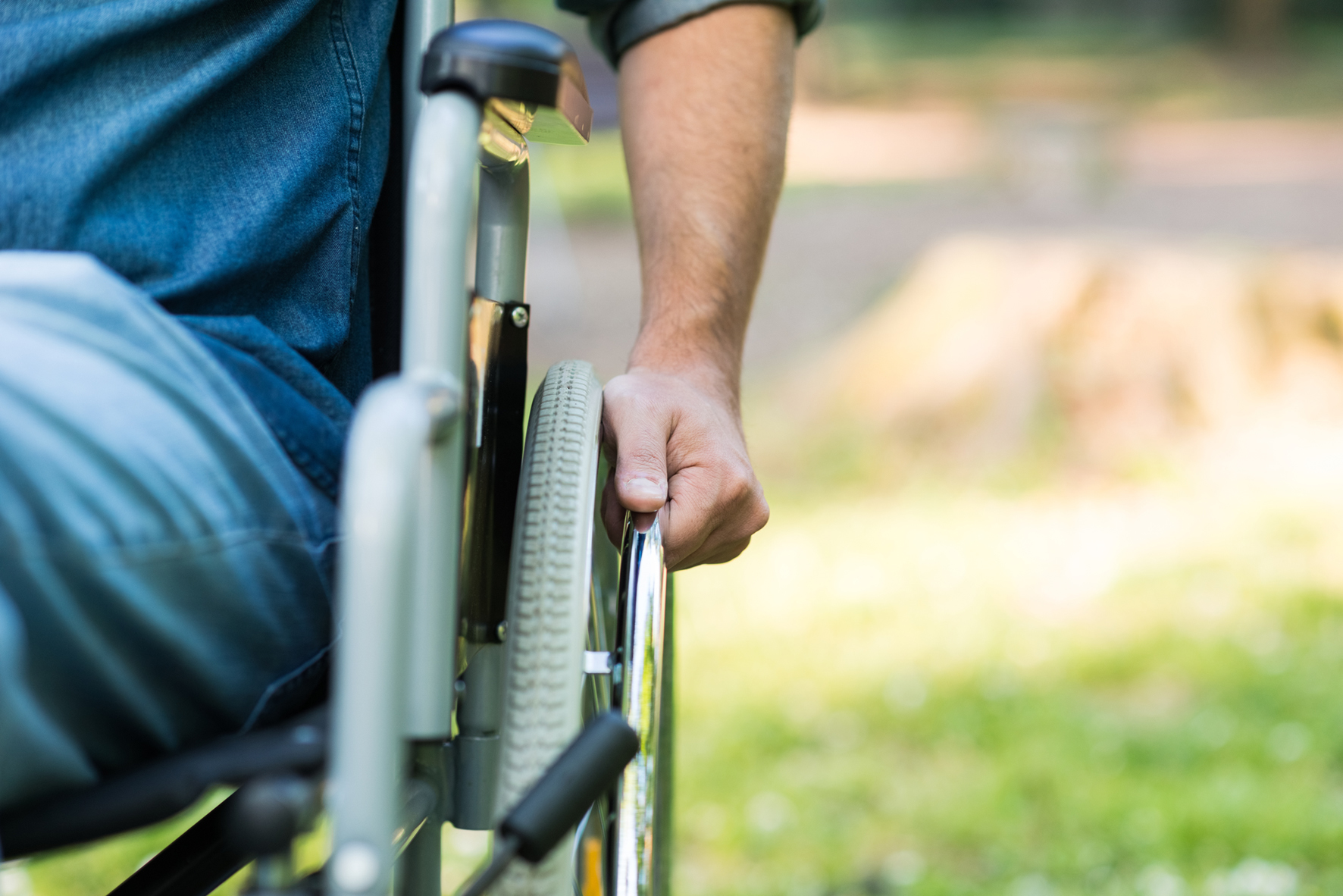 With current treatment techniques, most people with MG have a near-normal life expectancy. In myasthenic crises, the death rate was roughly 50% to 80% fifty years ago, but it has since dropped significantly to 4.47 percent. Morbidity is caused by occasional muscular weakness, which leads to aspiration pneumonia, as well as drug side effects.

Various clinical and laboratory/imaging findings in MG are also prognostic. Several studies have revealed the following:

Myasthenic crisis is a complication of myasthenia gravis that is mainly caused by infections, stress, or severe diseases.

Long-term steroid effects such as osteoporosis, hyperglycemia, cataracts, weight gain, hypertension, and avascular necrosis of the hip are among the treatment consequences. With continuous immunosuppressive medication, there is also a risk of lymphoproliferative cancers, as well as opportunistic infections such as systemic fungal infections, TB, and Pneumocystis carinii pneumonia.

Cholinergic crisis occurs as a result of an excess of ACh at nicotinic and muscarinic receptors caused by the use of cholinesterase inhibitors. Cramps, lacrimation, increased salivation, muscle weakness, muscular fasciculation, paralysis, diarrhea, and blurred vision are some of the symptoms.

Myasthenia gravis, like other autoimmune illnesses, affects genetically vulnerable people and has no known treatment. Current therapy methods attempt to decrease inflammation and improve symptoms in patients. For improved patient-centered management and outcomes, it is necessary for members of the interprofessional team, which comprises the primary care doctor, pharmacist, nurse, physiotherapist, and a neurologist, to work together professionally.

The primary care physician should educate the patient on the factors that might precipitate an attack, the treatment options available, and the long-term risks. The patient should be able to select from among the offered therapy options. Long-term therapy of myasthenia gravis necessitates that the patient be educated on the necessity of drug adherence. Once agreement is gained, family members may be included in the patient's treatment.