Obstetric ultrasonography, often known as prenatal ultrasound, is the use of medical ultrasonography during pregnancy to generate real-time visual pictures of the growing embryo or baby in the uterus using sound waves (womb). In many countries, the technique is a common aspect of prenatal care since it may give a range of information regarding the mother's health, the timing and progress of the pregnancy, and the health and development of the embryo or fetus.

The International Society of Ultrasound in Obstetrics and Gynecology (ISUOG) recommends that pregnant women have routine obstetric ultrasounds between 18 and 22 weeks' gestational age (the anatomy scan) to confirm pregnancy dating, measure the fetus so that growth abnormalities can be identified early in pregnancy, and assess for congenital malformations and multiple pregnancies (twins, etc).

According to research, routine obstetric ultrasonography before the age of 24 weeks can considerably minimize the chance of failing to identify multiple gestations and can enhance pregnancy dating to lower the risk of labor induction for post-dates pregnancy. However, there is no difference in prenatal mortality or poor newborn outcomes.

Anatomy and Physiology of the female reproductive system

When an intrauterine gestational sac with a yolk sac and/or a fetal heart beat is observed with an endomyometrial mantle larger than 7mm, an IUP is verified on ultrasound. The absence of any of these characteristics would be characterized as no definite intrauterine pregnancy (NDIUP). 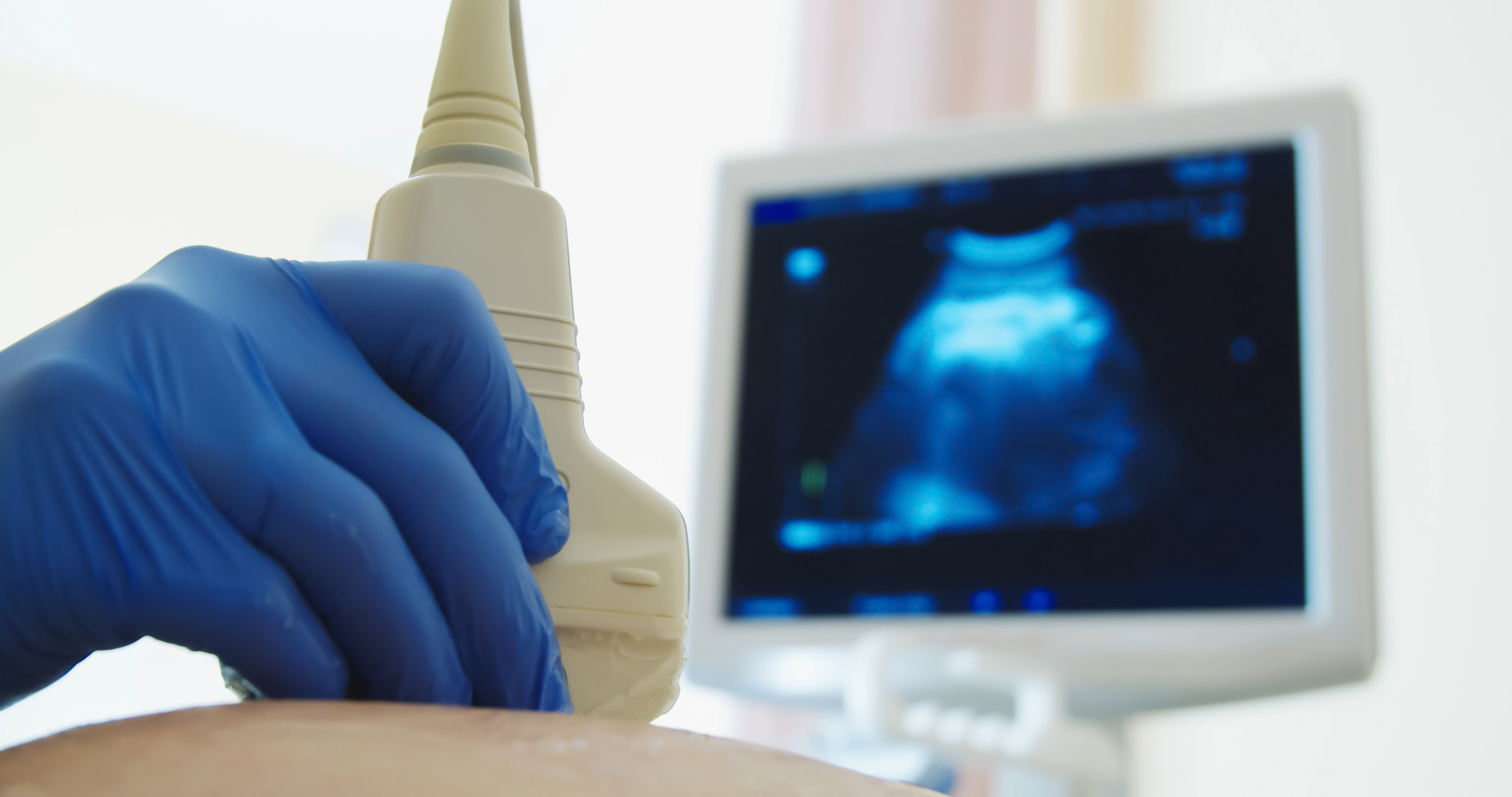 Emergency physicians are often the first providers to ultrasound first trimester pregnancies, as obstetricians will ask a patient to schedule her first appointment at approximately 8 weeks gestation according to her last menstrual period. For this reason, patients will often present to the ED after finding out they are pregnant from a home pregnancy test, sometimes for no other reason other than to formally diagnose the pregnancy.

In these cases, an ultrasound should be performed to establish the presence of an IUP and, if present, to date the pregnancy. While it was originally considered that the sooner a pregnancy was dated, the more accurate the gestational age would be, the difference may be too minor to warrant. However, dating the pregnancy using the "crown-rump-length" calculation (CRL) over the longest dimension of the fetal pole without including the yolk sac would be appropriate and important to communicate to the patient's obstetrician, especially if the patient missed her first obstetric appointment and ultrasound.

If an asymptomatic patient has NDIUP, a blood beta-hCG test should be conducted, and the patient should schedule a repeat test in 48 hours with obstetrician follow-up to confirm the hormone is increasing correctly.

A positive urine pregnancy test with free peritoneal fluid in Morison's pouch or the pelvis in a patient with an NDIUP is highly specific for an ectopic pregnancy necessitating surgical care.

A twin pregnancy or molar pregnancy might explain the severe nausea and vomiting.

Your doctor will be able to offer more precise prenatal care guidelines once your pregnancy timeline has been established. These scans also provide expectant couples an estimated due date, which, according to the Society of Obstetricians and Gynecologists of Canada, is generally accurate to within five days.

Dating ultrasounds give accurate crown-rump length (CRL) measurements that may be used to calculate gestational age and EDD. Because the fetus is in the optimal position for measuring, ultrasound scans taken within the 7- to 12-week period give the highest due date accuracy.

During this stage period, the fetus is in the most linear posture, developing fast but unable to twist or change its body position much. As a result, an ultrasound at this time period offers the most precise crown-to-rump measurement for predicting birth.

Between 11 and 13 weeks plus six days of pregnancy, NT ultrasound tests are conducted. Your sonographer will measure the fluid at the back of the Fetus's neck during an NT exam (called nuchal translucency). Every Fetus has some fluid here. Down syndrome fetuses are more likely to have an increased quantity of fluid.

Anatomy ultrasounds are performed throughout the second trimester, generally between the ages of 18 and 22 weeks. These scans are also known as a level-two ultrasound or a 20-week anatomy scan. The anatomy scan is usually the most memorable obstetric ultrasound for parents because it is the first time they get to see their baby.

Also, note that the fetus’s sex organs are not the primary area of interest during an anatomy scan. During this scan, the sonographer is looking for critical medical information such as heart rate, brain development, spinal structure, etc.

Sometimes fetal genitalia cannot be seen during an anatomy scan due to body position. If the fetus has its legs crossed or is facing away from the abdomen, it can be challenging to determine the gender.

A BPP ultrasound is usually done after 28 weeks of pregnancy, in the third trimester.

A BPP ultrasound is used to examine fetal well-being in the weeks leading up to the expected birth date. This preventative test checks your baby's oxygen supply. If your baby's oxygen levels are ever threatened, your doctor may induce labor or recommend a Caesarean surgery to safeguard the baby.

Healthcare provider may recommend you for a BPP if you:

When obstetric ultrasonography is contraindicated?

In early pregnancy, there are no absolute contraindications to performing a transabdominal pelvic ultrasonography. To minimize contamination and infection, avoid scanning over a cut or incision. In the presence of hypotension, a transvaginal ultrasonography is contraindicated. It is also advised to employ settings that expose the first-trimester fetus to as low as reasonably feasible (ALARA) frequencies during the exam by avoiding color and spectral Doppler. 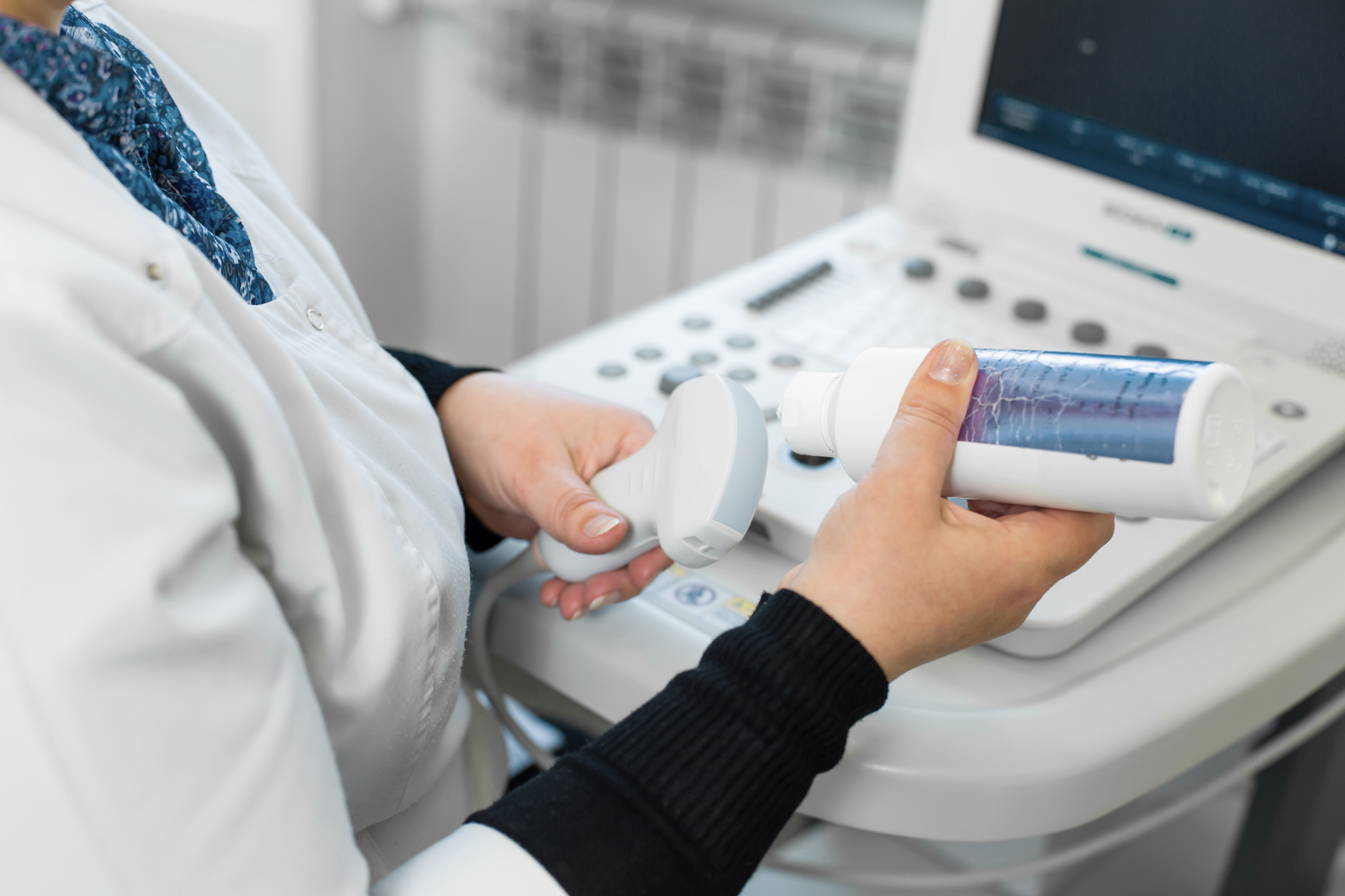 It is preferable if the patient's bladder is full, as this creates an auditory window for seeing the uterus. The patient should be lying supine on a stretcher with her abdomen exposed and towels wrapped around the gown and undergarment borders to protect the ultrasound gel from getting into her clothes. The ultrasound machine should be positioned to the patient's anatomic right, connected in (if applicable), and switched on for dominant right-hand operators. If feasible, the lights should be muted.

A transabdominal pelvic ultrasound should always be performed prior to a transvaginal ultrasound. Before doing a transvaginal ultrasound, the patient's bladder should be completely empty to allow the probe to go as close to the uterus and adnexa as possible. To provide optimal vision of an anteverted uterus, the patient should be placed in a stretcher with stirrups and her pelvis near the stretcher's edge, or her pelvis should be elevated 8 cm to 10 cm using an upside-down bedpan and two to three folded chucks.

How does the procedure work?

Ultrasound imaging works on the same principles as sonar, which is used by bats, ships, and fisherman. A sound wave bounces back or echoes when it strikes an item. It is possible to establish how far away an item is by analyzing its echo waves, as well as its size, shape, and consistency. This includes whether or if the thing is solid or fluid-filled.

Ultrasound is used by doctors to identify changes in the appearance of organs, tissues, and arteries, as well as abnormal structures such as tumors.

A transducer delivers sound waves and captures the echoing (returning) waves during an ultrasound test. When the transducer is pressed against the skin, it emits inaudible high-frequency sound waves into the body. As sound waves bounce off internal organs, fluids, and tissues, the transducer's sensitive receiver detects minute changes in pitch and direction. These characteristic waves are quickly measured by a computer and shown as real-time images on a monitor. Typically, the technician records one or more frames of the moving images as still photos. They may also preserve photos in brief video loops.

An ongoing ultrasound film shows the movement of the embryo or fetus and his or her heartbeat. Doppler, a particular application of ultrasound that analyzes echoes created by blood traveling through the fetal heart, blood vessels, and umbilical cord and converts them into audible sound, is also used by ultrasound devices. Patients have reported the sound as a whooshing noise.

Doppler ultrasound is a type of ultrasound that monitors the direction and speed of blood cells as they travel through vessels. The mobility of blood cells causes the pitch of reflected sound waves to alter (called the Doppler effect). A computer captures and analyses the noises, producing graphs or color images that depict the flow of blood via the blood vessels.

What happens during the obstetric ultrasound?

The sonographer will apply a warm, hypoallergenic ultrasonography gel to your abdomen and slide a transducer over it to get pictures of the fetus.

To collect pictures, the sonographer will move the transducer around the target region with moderate pressure. This pressure should not cause any discomfort. Please notify your sonographer if you are experiencing any pain.

Talk to your sonographer if you are having difficulty retaining your bladder or are in an uncomfortable position so that we can make modifications.

The sonographer will be focused on finishing your medical exam in a fast and coherent manner during your scan; thus, try to keep your questions until the conclusion of the session.

At the end of your exam, we will print some ultrasound images, and we can also send digital photos to your cell phone or email for maximum convenience.

A radiologist will review the images and send a detailed report to your doctor, usually within one day.

Current evidence indicates that diagnostic ultrasound is safe for the unborn child, unlike radiographs, which employ ionizing radiation. Randomized controlled trials have followed children up to ages 8–9, with no significant differences in vision, hearing, school performance, dyslexia, or speech and neurologic development by exposure to ultrasound. In one randomized trial, the children with greater exposure to ultrasound had a reduction in perinatal mortality, and was attributed to the increased detection of anomalies in the ultrasound group.

Despite the fact that it is the same technology used in hospitals, the FDA opposes its usage for non-medical purposes such as fetal keepsake videos and images.

Because of the acoustic intensity imparted to the fetus, the American Institute of Ultrasound in Medicine advises spectral Doppler only if M-mode sonography fails, and even then only briefly.

Ultrasound imaging is a noninvasive medical diagnostic that aids doctors in the diagnosis and treatment of medical disorders. It is risk-free and painless. It uses sound waves to create images of the interior of the body. Sonography is another name for ultrasound imaging. It employs a tiny probe known as a transducer and gel that is applied directly to the skin. High-frequency sound waves flow from the probe into the body via the gel. The noises that bounce back are collected by the probe. These sound waves are used by a computer to produce an image. Ultrasound examinations do not involve the use of radiation (x-rays). Because ultrasound images are captured in real time, they can reveal the structure and movement of the body's internal organs. Blood can also be seen flowing via blood vessels in the photos.

Obstetrical ultrasound shows an embryo or fetus inside a woman's uterus, as well as the mother's uterus and ovaries. Doppler ultrasonography is a kind of ultrasound that measures the movement of materials in the body. It lets the clinician to examine and analyze blood flow via the body's arteries and veins. During an obstetrical ultrasonography, the examiner may check blood flow in the umbilical cord or, in certain situations, the fetus or placenta.

Obstetric ultrasonography is not capable of detecting all fetal abnormalities. As a result, if a pregnant woman has clinical or laboratory suspicions of a possible abnormality, she may need to undergo nonradiologic testing such as a blood test or amniocentesis (the evaluation of fluid taken from the sac surrounding the fetus) or chorionic villus sampling (evaluation of placental tissue) to determine the health of the fetus, or she may be referred to a perinatologist by her primary care (an obstetrician specializing in high-risk pregnancies).