Pulmonary hypertension (PH ) is a disorder characterized by elevated blood pressure in the lungs' arteries. Shortness of breath, fainting, weariness, chest discomfort, leg edema, and a rapid heartbeat are all symptoms. Exercise may be difficult due to the condition. The onset is usually gradual.

If a patient's pulmonary mean arterial pressure is more than 25mmHg at rest or greater than 30mmHg during activity, he or she is diagnosed with pulmonary hypertension.

The diagnosis and treatment of severe types of PH, particularly pulmonary arterial hypertension and chronic thromboembolic pulmonary hypertension, are challenging and require close collaboration between the local physician and specialist facilities. 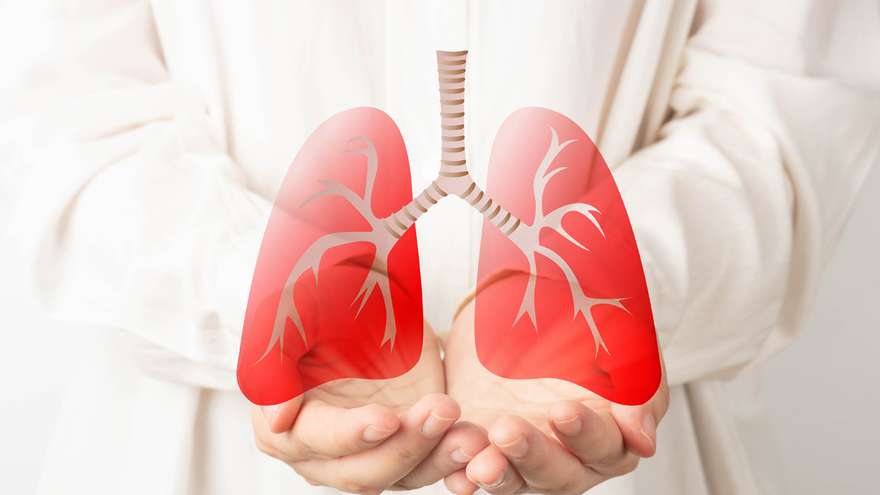 Pulmonary hypertension is not a diagnosis in and of itself, but rather a hemodynamic condition defined by a resting mean pulmonary artery pressure (PAPm) of 25 mm Hg.

PAH is a rather uncommon condition. The estimated prevalence ranges from 15 to 50 cases per million people. Idiopathic PAH is the most frequent kind of PAH, and it affects women more than males. Pulmonary hypertension caused by other conditions, such as chronic heart or lung disease, follows the same epidemiology as the linked disease.

The WHO classifies PH into five groups, with Group I (pulmonary arterial hypertension) further classified into Group I' and Group I" classes. The most recent WHO categorization system can be described as follows (with adaptations from more recent ESC/ERS standards noted in italics):

WHO Group I" – Persistent pulmonary hypertension of the newborn

WHO Group V – Pulmonary hypertension with unclear or multifactorial mechanisms 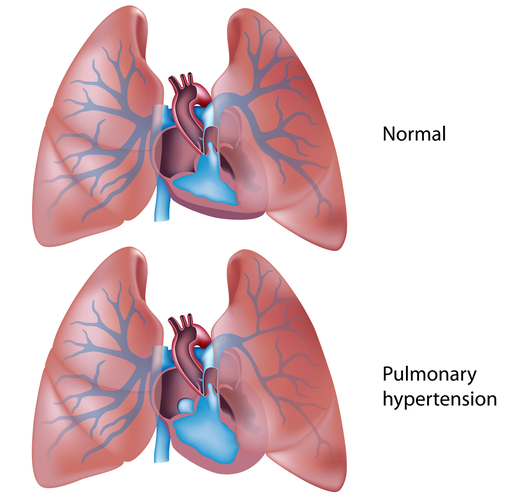 Pulmonary hypertension (PH) can be caused by a variety of factors. The World Health Organization (WHO) classified PH into five categories based on the etiology in 1998, and these categories were modified in 2013. Group 1 is characterized by primary pulmonary hypertension or pulmonary arterial hypertension (PAH). Idiopathic PAH is the most common cause among this group, with other reasons such as toxin-induced, connective tissue diseases, and other associated ailments being less common.

The second group includes PH caused by left heart disease, which is the most prevalent cause of PH. Lung illnesses such as chronic obstructive pulmonary disease and interstitial lung disease cause Group 3 PH. Group 4 PH is caused by chronic pulmonary thromboembolism, whereas group 5 PH is caused by unknown or multifactorial reasons.

The constriction of blood arteries connecting to and inside the lungs is involved in the pathophysiology of pulmonary arterial hypertension (WHO Group I). This makes it more difficult for the heart to pump blood via the lungs since it is far more difficult to force water down a small channel than a broad one. Fibrosis occurs when the damaged blood vessels stiffen and thicken over time.

This raises the blood pressure within the lungs and reduces blood flow. These modifications, like those seen in other kinds of pulmonary hypertension, increase the workload on the right side of the heart.

The left side of the heart receives less blood when blood flow to the lungs diminishes. This blood may also have a lower oxygen content than normal. As a result, it becomes increasingly difficult for the left side of the heart to pump enough oxygen to the rest of the body, especially during physical exercise. The Gaussian curvature and mean curvature of the right ventricular endocardial wall of PH patients were found to be substantially different from controls during the end-systolic volume phase of the cardiac cycle.

When a newborn baby's circulatory system fails to adjust to life outside the womb, he or she develops persistent pulmonary hypertension, which is characterized by high resistance to blood flow through the lungs, right-to-left cardiac shunting, and severe hypoxemia.

The pathogenesis of pulmonary hypertension caused by left heart disease (WHO Group II) is fundamentally different in that there is no constriction or damage to the pulmonary blood vessels. Instead, the left heart fails to properly pump blood, resulting in blood collecting in the lungs and back pressure inside the pulmonary system.

Pulmonary edema and pleural effusions result from this. The increased back pressure is known as 'isolated post-capillary pulmonary hypertension when there is no pulmonary blood vessel constriction .

Low amounts of oxygen in the alveoli (due to respiratory illness or living at high altitude) produce constriction of the pulmonary arteries in pulmonary hypertension caused by lung disorders and/or hypoxia (WHO Group III). This is known as hypoxic pulmonary vasoconstriction, and it is initially a defensive reaction aimed to prevent too much blood from going to parts of the lung that are injured and lack oxygen.

The initiating event in CTEPH (WHO Group IV) is thought to be unresolved blood clots blocking or narrowing the pulmonary blood vessels; these clots can lead to increased pressure and shear stress in the rest of the pulmonary circulation, precipitating structural changes in the vessel walls (remodeling) similar to those seen in other types of severe pulmonary hypertension. This combination of artery blockage and vascular remodeling raises the resistance to blood flow and, as a result, the pressure inside the system.

Progressive exercise dyspnea is the hallmark symptom of all forms of pulmonary hypertension, and it is frequently accompanied by weariness and exhaustion. Because the symptoms are vague, there is frequently a long period of time between the beginning of symptoms and the diagnosis. As the condition progresses, symptoms worsen and new ones emerge, such as dyspnea while bending down (bendopnea) and syncope, the latter especially during or soon after physical effort.

In individuals with pulmonary hypertension, recurrent syncope, even with minor effort, plainly indicates the existence of a potentially fatal condition. When a person suffers from cardiac decompensation, the right ventricular filling pressures rise, resulting in the classic triad of cervical venous congestion, ascites, and edema.

Physical examinations of patients with compensated pulmonary hypertension frequently show no abnormalities. The most common, and often subtle, signs are peripheral or central cyanosis (often only or more strongly during exercise), a pronounced pulmonary valve component of the second heart sound, and a systolic flow murmur reaching its maximum in tricuspid valve insufficiency at a left parasternal location.

The most frequent causes of pulmonary hypertension are left heart disease and lung disease.

The primary aims of diagnosis in pulmonary hypertension are early identification and exact illness categorization. In addition to a physical examination, the basic diagnostic tests in each instance of unclear or increasing exercise dyspnea should include an ECG and the detection of brain natriuretic peptide (BNP) or the N-terminal portion of its precursor (NT-proBNP). If neither of these tests reveal any abnormalities, pulmonary hypertension is exceedingly unlikely to be present.

Additional diagnostic tests are only needed if there is a strong clinical suspicion of pulmonary hypertension or if the results of the above-mentioned tests are uncertain. Pathologic ECG or BNP results unmistakably signal that additional cardiological evaluation is required. 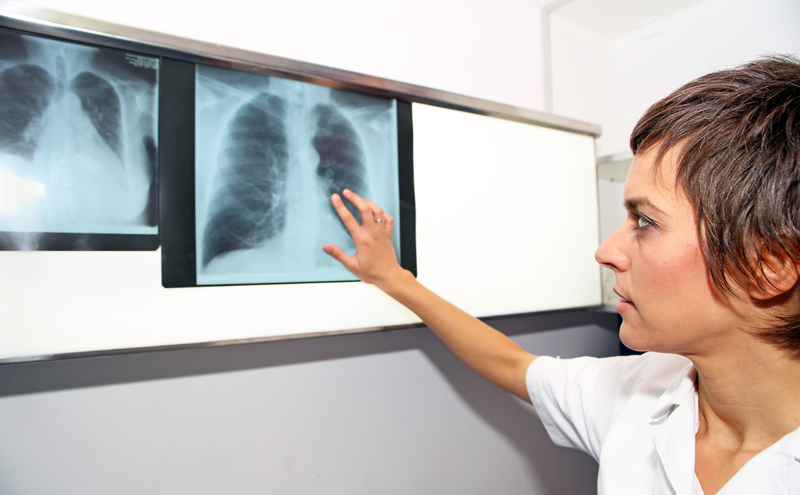 Biomarkers frequently assessed in the context of cardiac disease, such as brain natriuretic peptide (BNP) and troponin, are commonly tested in individuals suspected of having PH, however these tests have no well-proven significance in the diagnosis of PH. The 6-minute walk test is important for establishing a baseline of functional performance as well as monitoring illness development. A chest radiograph can be used to look for symptoms of cardiomegaly, enlarged right ventricular size, or pulmonary vascular congestion that can occur with left heart disease.

In group two PH, an electrocardiogram (ECG) may reveal symptoms of left heart illness such as left ventricular hypertrophy. Right axis deviation, as well as upright R waves in V1-V2 with deeper S waves in V5-V6, can be detected in PAH and may suggest right ventricular hypertrophy or right heart strain. On ECG, numerous premature atrial contractions and multifocal atrial tachycardia may be seen, similar to chronic lung disorders such as chronic obstructive pulmonary disease.

Transthoracic echocardiography is the preferred noninvasive screening technique. A pulmonary artery systolic pressure (PAS) more than 40 mm Hg or a mean pulmonary artery pressure (PAP) greater than 25 mm Hg should prompt additional assessment for pulmonary hypertension. Other noninvasive measurements, such as the Tei myocardial performance index, which assesses the efficiency of the RV, and the tricuspid annular plane systolic excursion (TAPSE), which decreases as the RV dilates and function degrades, may be employed as indirect indicators of PH.

Treatment of pulmonary hypertension related to other disorders (groups 2–4) should focus on the underlying condition, and there is no recognized use for PAH medicines in these patients. Group one PH therapy is a sequential approach that usually necessitates referral to a center qualified to diagnose, treat, and monitor PAH.

Endothelin receptor antagonists including ambrisentan, bosentan, and macitentan bind to endothelin and decrease vasoconstriction mediated by endothelin. These can be taken orally and are indicated for patients with mild to severe illness, as well as those in NYHA classes II and III. PDE-5 inhibitors (tadalafil, sildenafil, vardenafil) block enzymatic activities, resulting in increased cyclic guanosine monophosphate and pulmonary and systemic vasodilation.

Patients with PH caused by persistent thromboembolism should be referred for endovascular thrombectomy assessment. Heart-lung transplantation is the last resort for patients who have failed rigorous medical therapy.

The objective of treatment is disease containment, which means keeping the patient at a satisfactory clinical level (WHO functional class I or II) without evidence of right heart failure and, preferably, without disease development. This aim was met in 40% of participants in one randomized research utilizing first combination treatment.

The medicine used is determined in part by the severity of pulmonary arterial hypertension. The current recommendations advocate categorizing illness into low-, intermediate-, and high-risk categories based on the projected 1-year mortality rate. Patients with newly diagnosed "typical" pulmonary arterial hypertension who are at low or intermediate risk are given an endothelin receptor antagonist (ERA) in conjunction with a phosphodiesterase-5 (PDE5) inhibitor or a soluble guanylate cyclase (sGC) stimulator.

For high-risk individuals, a triple combination of an ERA, a PDE5 inhibitor or sGC stimulator, and an intravenously delivered prostacyclin analog is indicated as a first therapy.

Although survival time varies across people, PAH is considered a generally deadly sickness. Untreated, the prognosis of pulmonary arterial hypertension (WHO Group I) is 2–3 years following diagnosis, with right ventricular failure being the most common cause of death. The survival time is vary and is determined by a variety of factors.

A recent outcome study of patients who had begun therapy with bosentan (Tracleer) revealed that 89 percent of patients were still alive after two years. Survival rates are rising as a result of new medicines. From March 2006 to December 2009, 2,635 patients were recruited in The Registry to Evaluate Early and Long-term Pulmonary Arterial Hypertension Disease Management (REVEAL Registry), with 1-, 3-, 5-, and 7-year survival rates of 85 percent, 68 percent, 57 percent, and 49 percent, respectively.

Survival rates for individuals with idiopathic/familial PAH were 91 percent, 74 percent, 65 percent, and 59 percent, respectively. Pregnant women with severe pulmonary arterial hypertension have an extremely high death rate (WHO Group I). Pregnancy is sometimes considered as dangerous in these women.

Pulmonary hypertension is defined as a mean pulmonary arterial pressure greater than 25 mm Hg at rest or greater than 30 mm Hg during exercise, and it is frequently characterized by a progressive and sustained increase in pulmonary vascular resistance, which can eventually lead to right ventricular failure.

If left untreated, it can result in death. The treatment for pulmonary hypertension focuses on the underlying cause and its impact on the cardiovascular system, with success rates differing depending on the etiology. Novel therapeutic molecules, such as prostacyclin and others in clinical trials, have opened the door to the potential of a particular therapy for these hitherto incurable diseases.