Syringomyelia is a neurological disorder characterized by the existence of a fluid-filled cavity inside the parenchyma or central canal of the spinal cord. It is most commonly found in association with type 1 Chiari malformations (CMs). Spinal cord tumors, trauma, and post-traumatic or infectious adhesive arachnoiditis are also recognized etiologies.

Although syringomyelia can cause sensory signs like pain and temperature sensitivity, it is more usually discovered inadvertently. The growing use of magnetic resonance imaging (MRI) for evaluating neck or back discomfort has resulted in an increase in the identification of syringomyelia. Up to 5% of paraplegias are caused by syringomyelia. 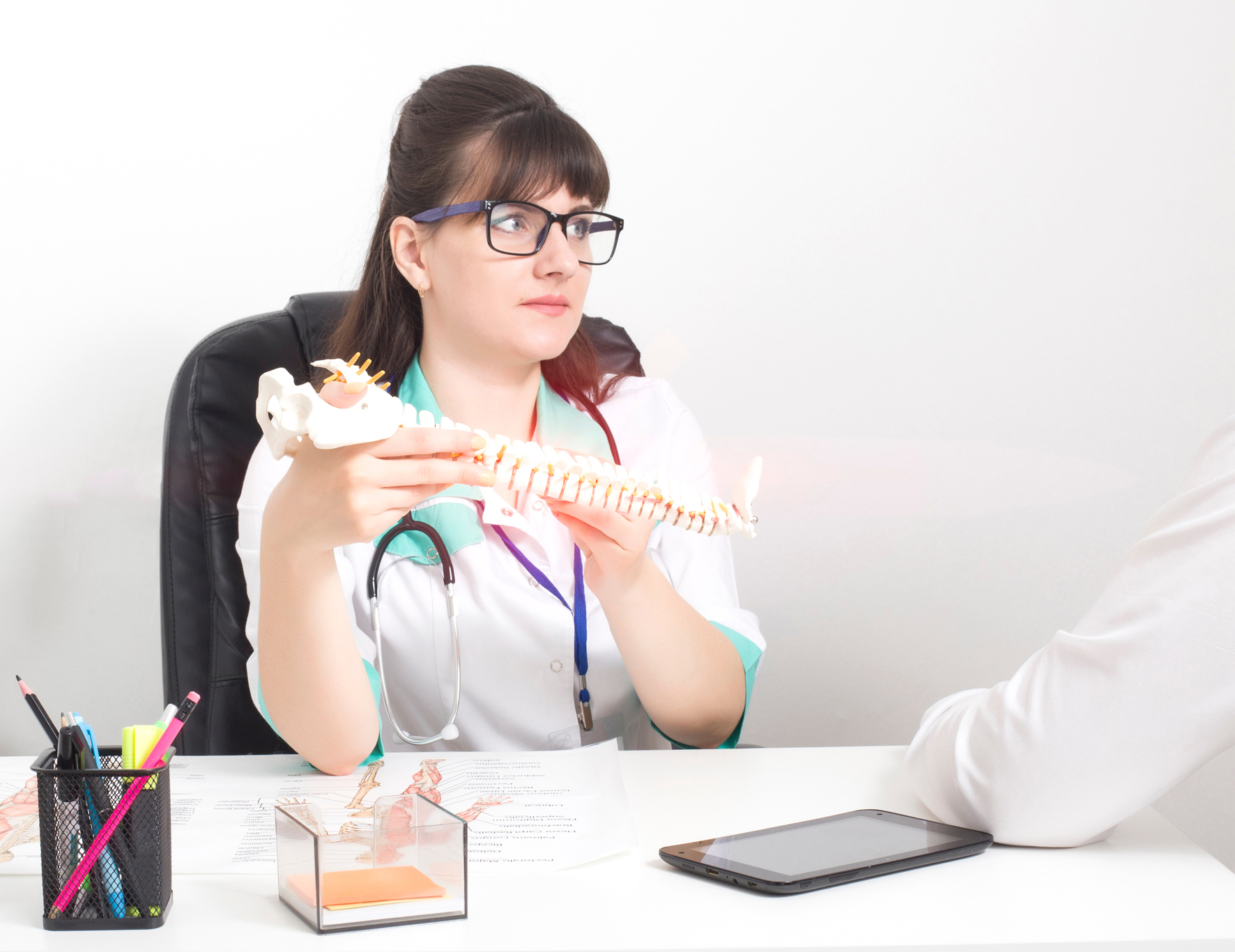 At its heart, syringomyelia is a condition of aberrant cerebrospinal fluid (CSF) circulation. A syrinx is a fluid-filled hollow located inside the spinal cord parenchyma or the central canal. This condition is most commonly related with CM-I, although other recognized causes include spinal cord tumors, trauma, and post-traumatic or infectious sticky arachnoiditis.

Although sensory complaints like as pain and temperature sensitivity are common in syringomyelia, they are usually an unintentional discovery. Because of the rising use of MRI in the regular examination of back and neck pain, the detection of syringomyelia is becoming more prevalent.

It is also known that a quick jolting of the head or a lengthy episode of coughing can produce a sudden start of symptoms in a previously asymptomatic patient, owing to an increase in tonsillar descent. Up to 5% of paraplegias are caused by syringomyelia. Patients with syringomyelia have a similar quality of life to those with heart failure or malignant neoplasms.

There is a scarcity of epidemiological data on syringomyelia. According to some research, the prevalence of syringomyelia ranges from 8.4/100,000 to 0.9/10,000, depending on ethnic and regional factors. The majority of patients are between the ages of 20 and 50. Twin studies, familial aggregation, and known genetic disorders related with CM1 and syringomyelia all point to a genetic component of transmission.

Conditions that change the physiologic CSF circulation dynamics are included in the etiology of syringomyelia. Most of the time, it is caused by a spinal subarachnoid space blockage. Etiology entails the following:

Syrinx in the absence of an identifiable cause

Syringomyelia with obstruction at the foramen magnum (developmental)

Syringomyelia with other diseases of the spinal cord (acquired)

Authors have proposed various theories to explain the origin and progression of syringomyelia.

Syringomyelia is characterized by a steadily increasing cavity in the central spinal canal. The spinothalamic tract neurons decussating in the anterior white commissure are compressed by this swelling CSF-filled "syrinx." The posterior columns, on the other hand, are unaffected since they are placed distally. As a result, pain and temperature sensations are lost but touch and vibratory senses are intact (segmental dissociated sensory loss). In a "cape-like" distribution, the upper limbs are primarily affected (sensory loss predominantly in the shoulder area).

The following are types of syringomyelia:

This kind of syringomyelia accounts for around 10% of all cases. On MRI, this communication may be seen. In rare circumstances, CSF circulation is obstructed. For certain individuals, a shunt procedure may be the best treatment choice.

Syringomyelia due to spinal cord injury

Fewer than 10% of syringomyelia cases are of this type. Mechanisms of injury include

Spinal dysraphism can produce syringomyelia by a number of processes, including those listed in the preceding three categories. The identification and treatment of related dysraphism has the greatest influence on halting syringomyelia development.

Syringomyelia due to intramedullary tumors

Fluid buildup is frequently induced by malignant cell secretion or bleeding. Ependymoma and hemangioblastoma are the most common tumors linked with syringomyelia. Because the mechanism of syrinx development involves an obstruction of the CSF system, extramedullary intradural and extradural tumors are examined separately under the second group.

Idiopathic syringomyelia has no known etiology and cannot be categorized under any of the preceding headings. Some individuals with severe neurologic deficits may benefit from surgical decompression.

Since syringomyelia is commonly associated with Chiari malformation type 1 (CM1), it is pertinent to look at clinical features directly related to Chiari Malformation 1.

Features caused by the syrinx will depend on its anatomical level and include:

The presentation varies greatly. Pain, muscular weakness and atrophy, particularly in the hands and arms, temperature insensitivity in the upper limb, spasticity or stiffness in the lower limbs, and increasing scoliosis are common complaints. The clinical course lasts months or years, with an initial fast decline that eventually slows. The cyst form, symptom duration, and severity all have a linear connection.

If Chiari Malformation 1 is present, patients may additionally have an occipital headache (caused by coughing, straining, or sneezing, among other things), neck discomfort, gait and balance issues, dizziness, hoarseness, swallowing difficulties, and sleep disorders such as snoring.

It has been reported that in individuals with syringomyelia related to foramen magnum blockage treated with simply a syringosubarachnoid or a thecoperitoneal shunt, spasticity improves despite impairment of other neurological functions. This shows that the stiffness in the limbs is caused by the mass of the syrinx rather than brainstem compression at the level of the foramen magnum. 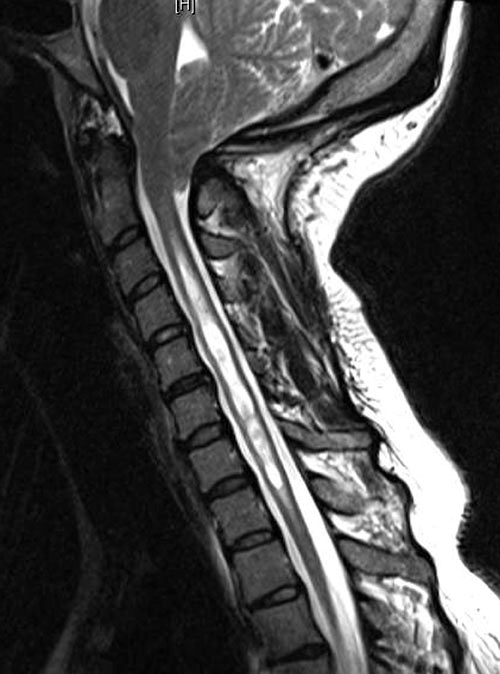 The preferred examination is MRI with and without contrast. It delineates pertinent anatomy and provides for proper viewing of the syrinx in both the sagittal and axial planes. The location, size, and extent of the syrinx cavity, as well as the degree of cerebellar tonsillar ectopia, are easily shown by MRI. Compression of retro-cerebellar CSF spaces is a common characteristic in patients with concomitant CM1.

MRI also aids in the diagnosis of cystic lesions and spinal malignancies. Infection is indicated by leptomeningeal enlargement. Any arachnoid scarring can also be shown by an MRI. The natural history of syringomyelia can also be documented by studying syrinx progression over months or years.

These are capable of non-invasively analyzing CSF hydrodynamics. It may detect CSF velocity/flow disturbances at the foramen magnum (especially in individuals with 5mm tonsillar ectopia), as well as see spinal cord wall motion and syrinx fluid motion at rest during cardiac systole and diastole. It is also beneficial for documenting postoperative changes in CSF flow and objective improvements.

This scan is suggested in cases where an MRI cannot be utilized (patients with metallic implants in the joints, cardiac pacemaker). Dye leeched into the syrinx cavity might be seen on delayed CT images. Some writers, however, have challenged CT myelography for its limited sensitivity in diagnosing CSF obstruction.

Although electromyography has no diagnostic value in syringomyelia, it can help rule out peripheral neuropathy as a cause of paresthesias.

There is no medical therapy for syringomyelia sufferers. A chronic, steady clinical course, on the other hand, is rather prevalent. It is critical to determine the underlying etiology of syrinx development. Surgical intervention is almost certainly required.

Neurorehabilitative care aids in the maintenance of remaining neurological functioning and the prevention of quadriparesis problems such as infection and decubitus ulcers.

The objective of treatment is to repair the underlying pathophysiology that is causing the problem. All current therapeutic options aim to improve CSF flow dynamics.

Suboccipital craniectomy, laminectomy of C1, C2, and possibly C3, and duraplasty are all part of this procedure.

Some writers claim microsurgical lysis of any adhesions, opening of the fourth ventricular outflow, and obex plugging (latter procedures are based on Gardner's hydrodynamic theory

Following decompression, the syrinx is drained into the subarachnoid space by a longitudinal incision in the dorsal root entrance zone (between the lateral and posterior columns), commonly at the C2-C3 level.

Incisions at the dorsal root entrance region had the lowest chance of worsening neurological impairment.

The following types of shunts may be indicated:

This approach is promoted as a feasible means of therapy; however, fast refilling of the hydromyelic cavity from the ventricular system occurs following fluid aspiration during surgery. Furthermore, a needle track is unlikely to remain open.

The terminal ventricle is a dilated part of the central canal that extends below the conus medullaris tip into the filum terminale. A laminectomy is done across the fluid sac's caudal boundary, and the filum is opened.

This technique is only appropriate for people who have syrinx symptoms but no Chiari malformation. It is ineffective when the hydromyelic cavity does not extend into the lumbar section of the spinal cord or into the filum terminale.

This method is very beneficial for assessing and treating numerous septate syrinxes.

The intramedullary cavity can be inspected with a fibroscope introduced through a minor myelotomy. Septa are fenestrated mechanically or with a laser. The cavity fluid is subsequently pushed into the subarachnoid area.

Surgical untethering in selected instances of posttraumatic tethering due to syringomyelia

Intraoperative ultrasonography can be used to confirm tonsil decompression and pulsatile cerebrospinal fluid flow near the craniovertebral junction. The length of sensory abnormalities best predicts post-surgery symptom recovery. According to studies, the shorter the length of the preoperative symptoms, the better the results. Early surgery reduces impairments.

Shunts are recommended for patients with idiopathic syringomyelia who have not responded to previous treatments. The most frequent type of shunt is a syringosubarachnoid shunt (SSAS). If this does not work, a syringoperitoneal shunt (SPS) may be utilized. While some research indicate that SSAS has better results than foramen magnum decompression, this is not widely accepted. Shunts are generally not recommended and are only used as a last option due to the high complication and failure rates, as well as the inability to resolve the underlying etiology.

Professionals still do not fully comprehend the natural history of syringomyelia; it is unexpected and very varied, making prognosis extremely difficult. Although the prognosis is dependent on the etiology, the degree of neurological dysfunction, and the location and size of the syrinx cavity, a syrinx diameter more than 5 mm and accompanying edema predicts a fast deterioration. The condition's rarity, varied natural history, and short follow-up make assessing therapy outcomes challenging. However, early surgery reduces impairments and improves outcomes.

The natural history of syringomyelia is still poorly known. Although past studies revealed that 20% of patients died at an average age of 47 years, death rates in today's patients are likely lower as a consequence of surgical treatments and improved management of comorbidities associated with substantial paresis, such as pulmonary embolism.

Myelopathy is one of the most serious consequences caused by the illness process. Spasticity can then proceed to paraplegia/quadriplegia, decubitus ulcers, recurrent pneumonia, and bowel and bladder dysfunction.

Cerebrospinal fluid (CSF) leaks, infection, bleeding, and recurrence of the syrinx are among neurological problems that can occur after surgery.

Complications due to myelopathy include the following:

Because of the rarity of syringomyelia, the diversity of presentation and natural history, and the relatively short follow-up in most studies, assessing treatment outcomes is challenging.

In one research, 50% of the syringomyelia patients remained clinically stable for several years.

Although an older research revealed that 20% of patients died at an average age of 47 years, death rates in today's patients are likely lower as a consequence of surgical interventions and improved management of comorbidities associated with substantial paresis, such as pulmonary embolism. 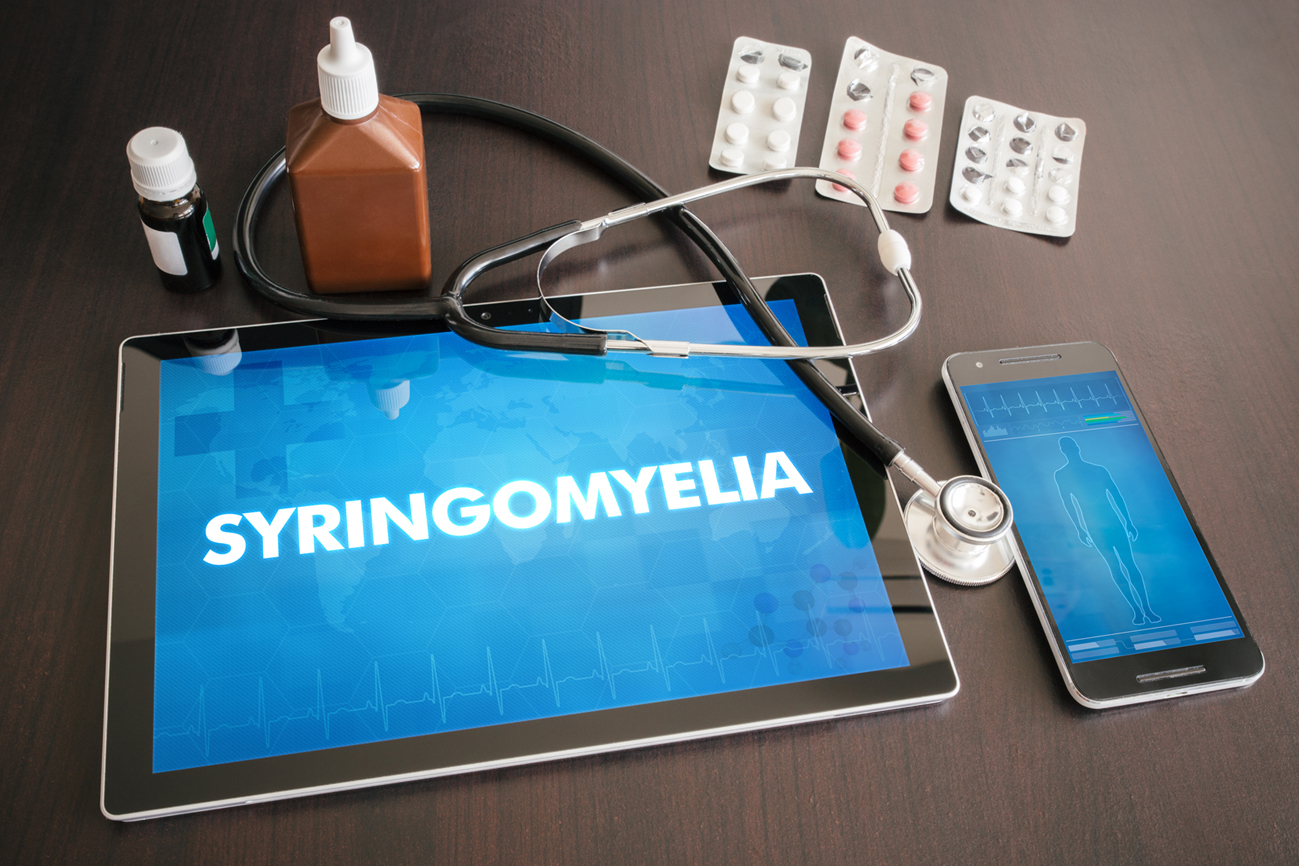 The formation of a fluid-filled cavity or syrinx within the spinal cord is known as syringomyelia. Hydromyelia is a dilatation of the central canal caused by cerebrospinal fluid (CSF) and may be considered syringomyelia.