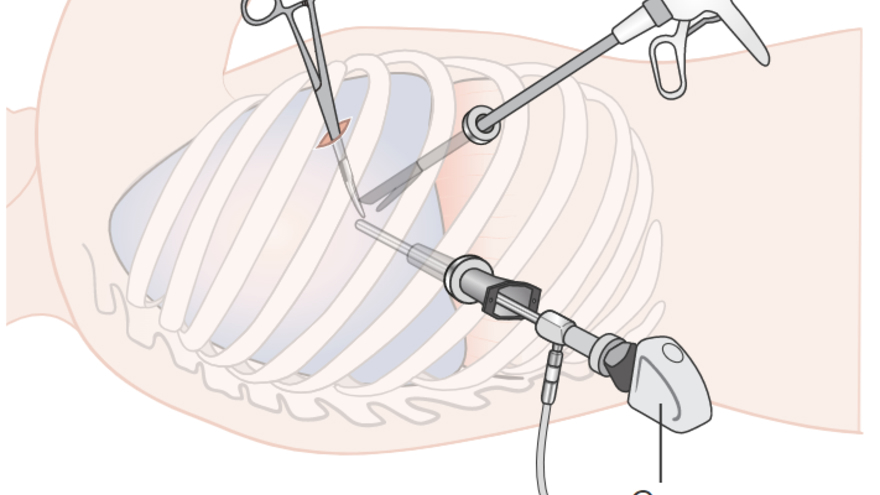 Video-assisted thoracoscopic surgery (VATS) is a minimally invasive surgical technique that has made great progress in the detection and treatment of a variety of pulmonary and cardiac problems during the last two decades.

Prior to this technique, the standard treatment for a thoracic pathology was a thoracotomy. Previously, the procedure was often used to evaluate and treat pleural effusions in patients with pulmonary tuberculosis. The development of fiber-optic light was a technical breakthrough that accelerated the advancement of all sorts of minimum access surgery.

The number of VATS surgeries conducted has grown over time as technological advances have made these treatments safer for the elderly and disabled. For example, the vast majority of doctors advocate VATS for lobectomies, which are often done under general anesthesia with One-Lung Ventilation.

Over the last two decades, video-assisted thoracoscopic surgery (VATS) has transformed the approach and therapy of numerous pulmonary and cardiac illnesses. Jacobeaus, a Swedish physician, was the first to undertake a thoracoscopic examination of the pleura while the patient was under local anesthetic. This method was often used to assess and treat pleural effusions in individuals with pulmonary TB.

A thoracotomy was the typical method to a thoracic pathology prior to this treatment. The creation of fiber-optic light was a technological breakthrough that ultimately resulted in the progress of all sorts of minimum access surgery. VATS uses have increased over the years as technology advances have made such operations safer for the elderly and weak patients.

The mature trachea is approximately 15 cm long. It begins at the lower end of the cricoid cartilage (C6) and separates into the right and left major bronchus at T5. The right bronchus is wider and closer to the trachea. It is divided into three lobe branches: upper, middle, and lower. The top and lower branches of the left bronchus are more horizontal. The lung lobes are separated into bronchopulmonary segments, each with its own segmental artery and bronchus. The veins go through the spaces between these segments. It is critical for the surgeon to understand these surgical components of the lung. 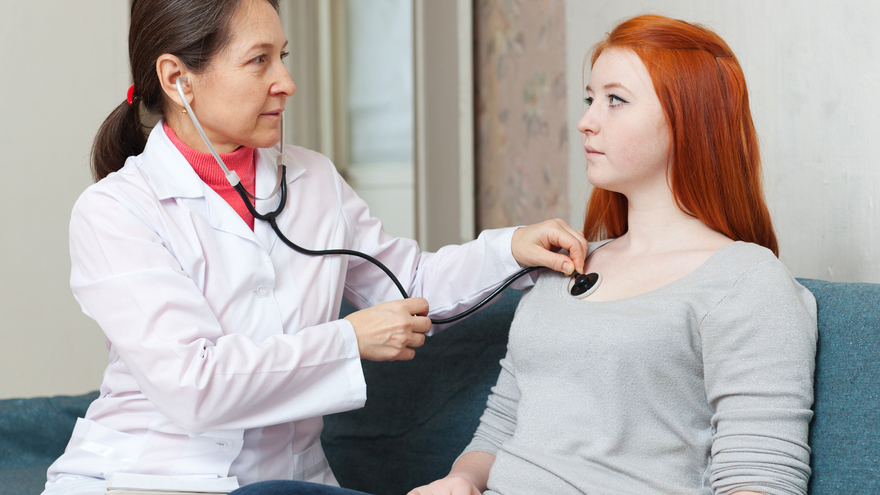 VATS has gradually replaced open thoracotomies in most thoracic surgical facilities around the world because to its improved safety profile in senior patients, better pain control, shorter recovery periods, and simpler hemorrhage control. It has been demonstrated to reduce hospital stay when compared to open thoracotomy. The shorter chest tube length, as reported by certain studies, might account for the majority of this, with removal rates of 54% in the VATS group on day 1 compared to 21% in open thoracotomies. Other investigations on lung cancer patients have found the same trend of fewer complications and decreased in-hospital mortality.

VATS patients required fewer blood transfusions than open thoracotomy patients. When compared to standard thoracotomies, they also had less postoperative discomfort and a higher quality of life. Long-term survival studies have revealed no statistically significant difference in overall 3-year survival in patients following thoracoscopic lobectomy versus those undergoing open lobectomy. VATS is still the standard of treatment for lobectomies, according to a consensus of doctors.

The advantages offered by VATS over conventional thoracotomy are: 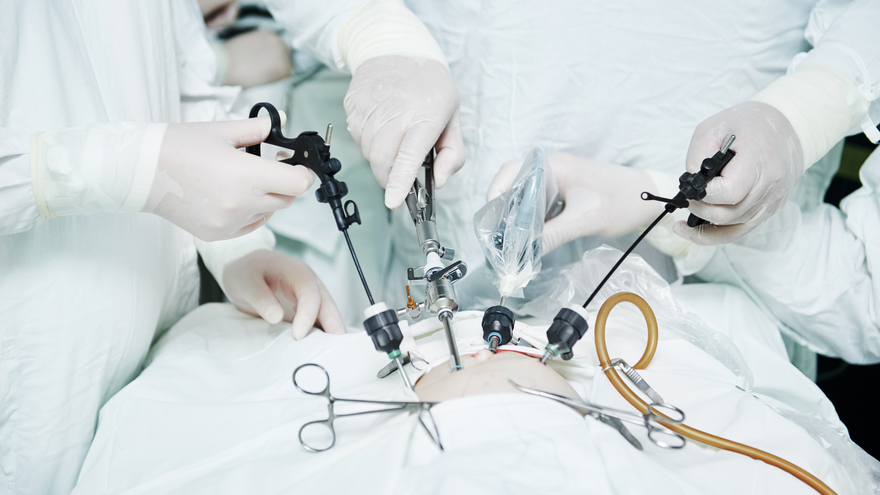 Patient selection is critical to achieving optimal surgical results. A thorough preoperative evaluation, with an emphasis on cardiac and respiratory function, is required to guarantee that the chosen candidates will tolerate one-lung breathing (OLV). Preoperative ASA physical status evaluation, spirometry, plethysmography, diffusing capacity of the lungs for carbon monoxide (DLCO) measurement, computed tomography (CT), and cardiopulmonary exercise testing (CPET) should all be examined.

Predicted postoperative FEV1 (ppo FEV1 %) is a popular predictor of postoperative pulmonary reserve. A FEV1 greater than 60% indicates that the patient will tolerate an anatomic lobe resection. If FEV1 is less than 60%, a ventilation-perfusion (VQ scan) scan can be utilized to determine the ppo FEV1. A ppo-FEV1 greater than 35%-40% is an excellent predictor of sufficient post-operative pulmonary reserve, and surgery can be performed. A FEV1 less than 30% indicated a need for a postoperative ventilator or supplementary oxygen.

Cardiopulmonary exercise testing is used to predict the reserve of the entire cardiopulmonary axis in cases where FEV1 and DLCO are borderline. The maximum oxygen consumption (VO2) is computed. To continue with surgery, a VO2 of more than 10ml/min/kg is essential.

A complete blood count may identify polycythemia caused by lung illnesses, as well as an increased white cell count indicating infection or inflammation. A chest x-ray and a CT scan offer the necessary anatomical data for the surgery. Arterial blood gases may aid in identifying individuals who are at a higher risk of postoperative problems. Patients with PaCO2 levels more than 50 mmHg or less than 60 mmHg are at risk.

Smoking cessation, treatment of underlying infections, and pulmonary rehabilitation may also be included in the preoperative optimization of patients receiving VATS.

Most VATS operations are performed under general anesthesia with selective single-lung breathing using a double-lumen endobronchial tube. Unless a left pneumonectomy is planned, intubation on the left side is normally performed. An appropriate alternative is a single-lumen endotracheal tube with a bronchial blocker.

Single-lung ventilation with modest tidal volumes is a superior alternative for treating pleural effusions and sympathectomy because it offers proper visibility of the pleural space. Furthermore, CO2 can be insufflated to promote partial lung collapse. A single-lumen tube is utilized for pediatric patients, with the tip inserted into the contralateral mainstem bronchus. Typed and crossmatched blood should be supplied for significant lung resections.

In addition, two large-bore intravenous lines and an arterial line should be inserted. Thoracoscopic examination of an awake, nonintubated, nonventilated patient in an ambulatory situation while under supervised anesthetic treatment has been documented. Nonintubated general anesthesia with spontaneous breathing with a supraglottic airway device was found to be a viable alternative to intubated general anesthesia. 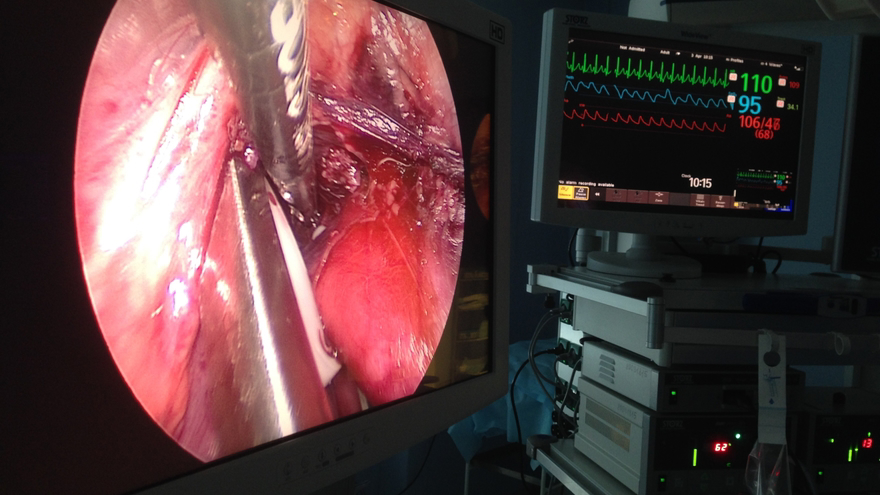 Most VATS patients must be in a lateral decubitus posture. This is followed by arching the table, which aids in separating the ribs for easier surgical access. This also alleviates any strain on the intercostal nerves. Most thoracic tissues, including the lungs, pleura, esophagus, pericardium, and other mediastinal structures, are accessible in the lateral decubitus posture. By suitably cushioning pressure sites, nerve damage may be avoided at all times.

The physiology of the lungs during anesthesia differs from that of the waking position due to the lateral decubitus posture, general anesthesia, artificial breathing, neuromuscular blockade, and surgical retraction. The blood flow sent to the non-ventilated lung will be the most important factor in oxygenation (intrapulmonary shunt). The shunt fraction is reduced by hypoxic pulmonary vasoconstriction, which lowers perfusion to the non-ventilated lung.

VATS is frequently conducted under general anesthesia and with OLV. During OLV, neuromuscular blockade and regulated ventilation are required to ensure appropriate oxygenation and a CO2 partial pressure comparable to double lung ventilation. Lower tidal volumes (5-7 ml/kg) and greater respiratory rates with a peak inflation pressure of less than 35 cm H2O are excellent for maintaining minute ventilation. By artificially compressing the nondependent lung, OLV enables surgical operations on the hemithorax.

This causes an intrapulmonary Right-to-Left shunt, which causes the Alveolar-arterial oxygen gradient to broaden, resulting in hypoxemia. OLV procedures may include the use of DLTs, single lumen tubes (SLTs) with built-in bronchial blockers, and independent bronchial blockers.

The employment of DLTs allows for the ventilation of either lung independently or concurrently. DLT implantation necessitates a unique approach, and it is best validated via a fiberoptic bronchoscope. Because tubes are prone to malpositioning and displacement, their location must be reconfirmed once the patient has been finally positioned for the surgery.

For thoracic procedures, apneic oxygenation or high-frequency positive pressure breathing may be employed instead. Because of growing respiratory acidosis and difficulties with surgery due to mediastinal bounce, the use of these procedures is limited. Shunting is the most prevalent cause of hypoxemia in OLV. Its prevalence has been estimated to be up to 5%. The first suggested step is a comprehensive check of the anesthetic circuit and apparatus. Any hypoxemia that develops during surgery should be treated by raising FiO2 to 100%.

The suctioning of the dependent lung is required. If an increase in FiO2 is insufficient to treat the hypoxemia, the anesthesiologist may switch to 2-lung ventilation. To enhance oxygenation, a recruitment technique followed by PEEP may be utilized on the ventilated lung's side. CPAP should be avoided as much as possible since it complicates surgery on the operational side.

The conventional VATS approach requires making 3 to 4 triangle incisions for scope and instrument insertion. VATS with a single port, on the other hand, has been described.

As sufficient analgesia has been found to expedite recovery and reduce respiratory problems, pain control is at the pinnacle of post-operative treatment. Thoracotomy is said to be one of the most painful surgical operations. Pain management begins intraoperatively and continues postoperatively. A mix of intravenous and localized methods is used to manage pain.

Intravenous analgesia in the form of systemic opioids and patient controlled analgesia (PCA) is the cornerstone of post-thoracotomy analgesic methods. NSAIDs have opioid-sparing properties and the added benefit of not causing respiratory depression. Epidural analgesia and intercostal nerve blocks can also be used to enhance the analgesic regimen. Improved analgesia correlates with improved respiratory function in the post-operative interval.

VATS is a surgical treatment that enables surgeons to view within the patient's chest and lungs. It is a type of 'keyhole' surgery that may be utilized for a variety of surgical operations. VATS may be recommended by your doctor to get access to your chest cavity, particularly the heart and lungs. They may do this to examine the region for issues such as tumors, to collect a tissue sample, or to do surgery.

A thoracoscope is placed through small incisions into the chest, and the surgeon can direct the camera to do a range of procedures on the interior of the chest, including as removing a section of the lung, draining fluid, or performing a surgery on the heart or lung. The length of time it will take you to recuperate is determined on the type of surgery you have. However, you will most likely need to rest at home for at least 1 to 2 weeks.