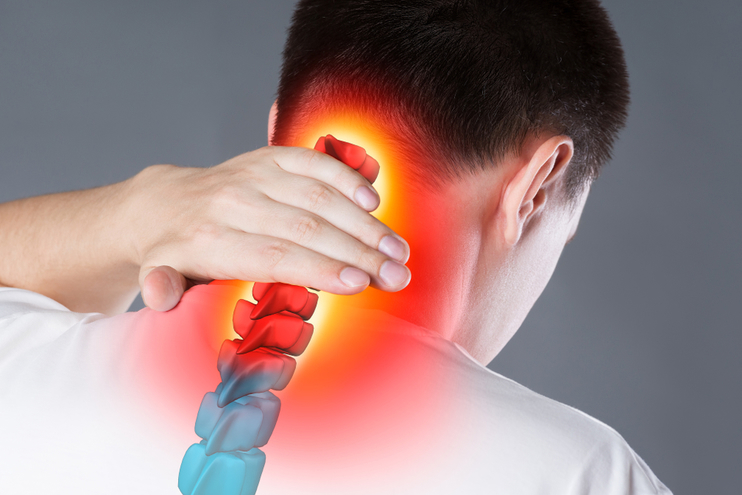 The vertebral column, often known as the spine, is made up of vertebrae and intervertebral discs. The cervical, thoracic, lumbar, and sacral areas are all included in this region, stretching from the skull’s base to the coccyx. The spine supports the body in several important ways, including providing structural support, safeguarding the spinal cord and branching spinal nerves, and allowing flexibility and mobility. The cartilaginous intervertebral discs between neighboring vertebrae act as shock-absorbing cushions to the axial loads of the body and support the spine.

Seven vertebral bodies make up the cervical spine, labeled C1 through C7, counting from the skull base to the thoracic spine. In contrast to the typical cervical vertebrae (C3 to C6) C1, C2, and C7 have different structural characteristics that set them apart from one another. The vertebral bodies, vertebral arches, and seven processes make up the anatomy of C3 to C6. The pedicles, bony processes that extend posteriorly from the vertebral body, and the lamina are the bone segments that make up the majority of the vertebral arch. The spinal canal, which houses the spinal cord, is surrounded by a ring formed by the pedicles and the lamina. Seven processes, including two superior and two inferior articular facets, one spinous process, and two transverse processes that permit the passage of the vertebral artery and vein, make up a normal vertebra.

The cervical area contains three unusual vertebrae. Due to its fusion with the C2 (axis) vertebrae, which serves as the atlas' pivot point, C1 (atlas), which articulates with the base of the skull, is unique in that it lacks a body. The presence of an odontoid process (dens), which rises from the superior part of the C2 vertebra's body and joins with the posterior surface of the anterior arch of C1, is the vertebra's most distinctive characteristic. In contrast to other cervical vertebrae, C7 differs from them in two key ways: first, the vertebral artery does not pass via its transverse foramina, and second, the spinous process is present, giving C7 the name vertebra prominens.

There are eight pairs of cervical nerves, called C1 to C8, in addition to the seven cervical vertebrae. Except for C8, which exits inferiorly to the C7 vertebra, each pair of cervical nerves emerges from the spinal cord superior to its corresponding vertebra. The nucleus pulposus of the intervertebral disc is displaced as a result of a cervical herniated nucleus, which may impinge on these crossing nerves as they leave the neural foramen or directly press the spinal cord inside the spinal canal. 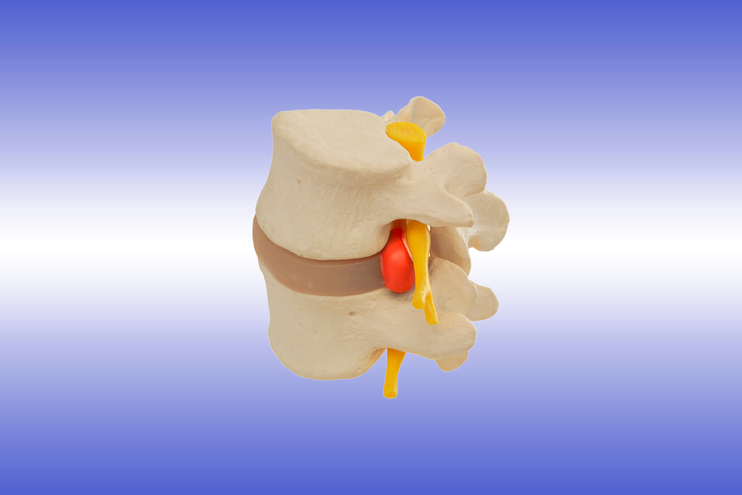 An intervertebral disc is a cartilaginous structure made up of three parts: endplates that attach the discs to neighboring vertebrae, an outer annulus fibrosus, and an inner nucleus pulposus. A nucleus herniation occurs when the nucleus pulposus partially or completely protrudes through the annulus fibrosus. Acute or chronic occurrences of this mechanism are also possible. Chronic herniations are caused by the intervertebral disc degenerating and drying out as a result of normal aging; these symptoms typically appear slowly or gradually and are usually less severe. Contrarily, acute herniations are typically produced by trauma, with the nucleus pulposus protruding via a tear in the annulus fibrosus as a result. When compared to the chronic cervical herniated nucleus, this injury typically results in a rapid onset of more severe symptoms.

Both in men and women, the prevalence of cervical herniated nucleus rises with age; it is most prevalent in adults in their third to fifth decades of life. More than 60% of cases are in females, who are more likely to experience it. Patients between the ages of 51 and 60 were those who were diagnosed as the most common for both sexes. 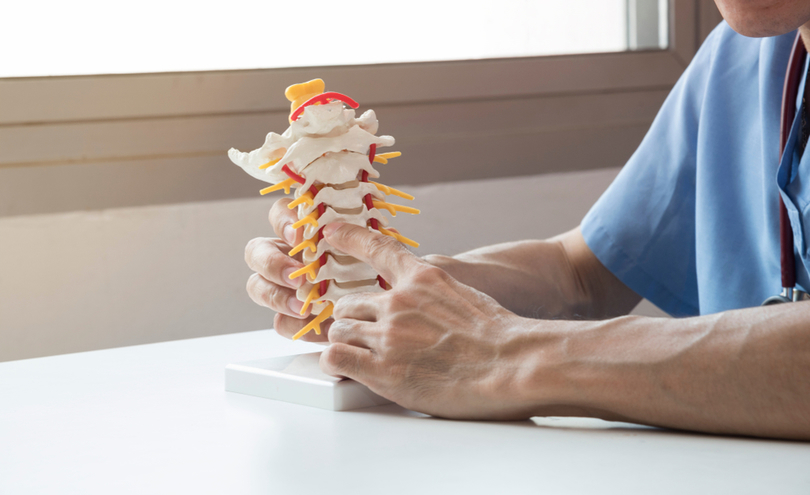 The pathogenesis of the cervical herniated nucleus is believed to involve both a localized increase in inflammatory cytokines and mechanical compression of the nerve by the protruding nucleus pulposus. Microvascular injury caused by compression forces can range in severity from minor blockage of venous flow that produces congestion and edema to a severe blockage that can lead to arterial ischemia. Inflammatory cytokines, such as interleukin (IL)-1 and IL-6, substance P, bradykinin, tumor necrosis factor-alpha, and prostaglandins, may be produced as a result of a herniated disc and nerve irritation. Stretching on the nerve root may play a further role in the recurrence of symptoms. The cervical nerve can be stretched in addition to being compressed by a herniation due to the trajectory it takes when it leaves the neural foramen. This arrangement might help explain why some patients feel pain alleviation when their arm is abducted since it reduces the nerve's stretch.

Posterolaterally, where the annulus fibrosus is weaker and doesn't have the posterior longitudinal ligament to provide structural support, herniations are more likely to happen. The cervical herniated nucleus that presses the cervical root as it leaves can cause radiculopathy in the accompanying dermatome due to its proximity to the traveling cervical nerve root. 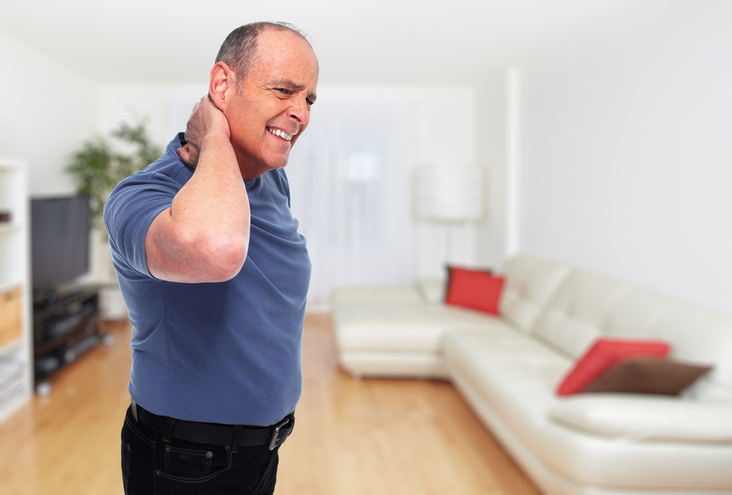 The C5-C6 and C6-C7 vertebral bodies are the ones where the cervical herniated nucleus most frequently happens. Symptoms will then develop at C6 and C7, respectively, as a result of this. In these patients, the history should include the main complaint, when symptoms first appeared, what relieved or aggravated them, whether they had radicular symptoms, and any previous treatments. Axial neck pain and ipsilateral arm pain or paresthesia in the related dermatomal distribution are the most frequent subjective complaints. It is crucial to spot several warning signs that could be symptoms of underlying inflammatory disorders, cancer, or infection as part of the assessment of neck pain. These consist of:

The patient's range of motion (ROM) should be evaluated by the doctor because it can reveal the degree of pain and deterioration. For the evaluation of sensory problems, motor weakness, and abnormalities in deep tendon reflexes, a comprehensive neurological examination is required. Any indication of spinal cord dysfunction should also receive careful consideration. Typical symptoms of single nerve lesions caused by cervical herniated nucleus compression include:

The Spurling test, Hoffman test, and Lhermitte sign are examples of provocative tests. Acute radiculopathy can be diagnosed with the Spurling test. In this test, the cervical spine is loaded axially by maximally extending the neck, rotating it towards the affected side, and compressing the head. As a result, the neuroforamen will close and the symptoms of radiculopathy may recur. Myelopathy and spinal cord compression can be detected using the Hoffman test and Lhermitte sign. Holding the long finger and flicking the distal tip downward is how the Hoffman test is carried out. Flexion and adduction of the thumb are positive signs. Flexing the patient's neck while performing the Lhermitte sign may cause an electrical sensation to go down their spine and into the extremities. 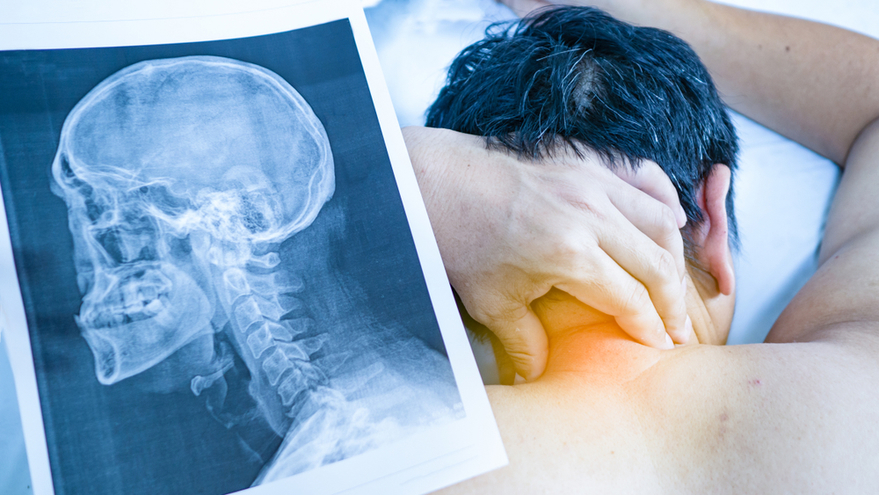 The majority of acute spinal injury or herniation patients will heal on their own during the first four weeks. Imaging during this time is often not advised because the treatment of these cases won't usually change. When there is a clinical suspicion of potentially dangerous pathology or when there is neurological deterioration, imaging during this time is advised. Additionally, after 4 to 6 weeks of conservative treatment, individuals who don't improve call for additional testing. Patients who exhibit any of the aforementioned red flag symptoms may also benefit from lab marker tests. These may consist of: 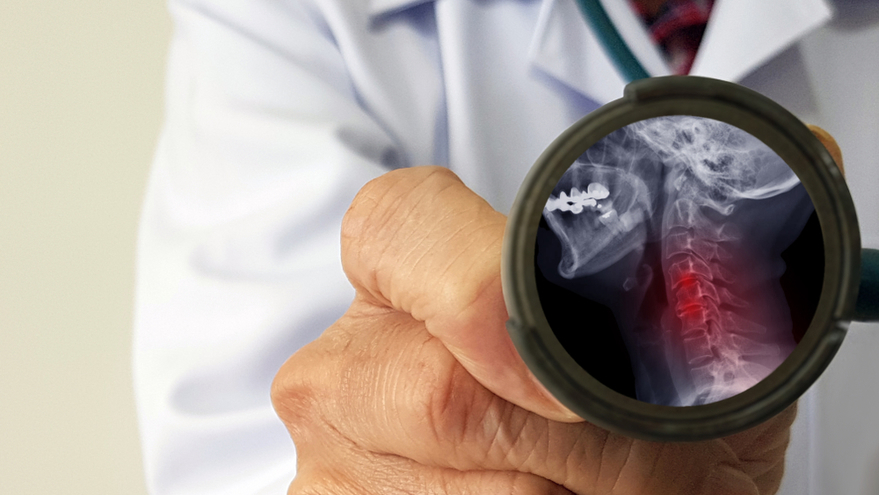 Conservative Treatments. The majority of individuals (between 70 and 90 percent) who have acute cervical radiculopathies caused by a herniated disc will get better with non-surgical treatment. Modalities that can be employed are as follows:

Interventional Treatments. A frequent non-surgical option is spinal steroid injections. With pathological confirmation by MRI, perineural injections (translaminar and epidurals, selective nerve root blocks) are choices. Under radiologic guidance, these procedures should be performed. Neuromodulation techniques have been heavily utilized in recent years to treat radicular pain brought on by the cervical herniated nucleus. These neuromodulatory treatments mostly use an intrathecal pain pump and a spinal cord stimulation device. These technologies provide minimally invasive, effective therapeutic choices for patients who are not amenable to treatment intervention.

Surgical Treatments. A significant degree of suffering that is resistant to non-operative treatments and severe or progressive neurological damage are indications for surgical intervention. Based on pathology, numerous approaches are described. The anterior cervical discectomy with fusion procedure continues to be the gold standard because it enables the pathology to be removed and prevents recurring neural compression by conducting a fusion. In individuals with anteromedial herniations, a posterior laminoforaminotomy may be an option. Total disc replacement is a newer treatment option with debatable indications. 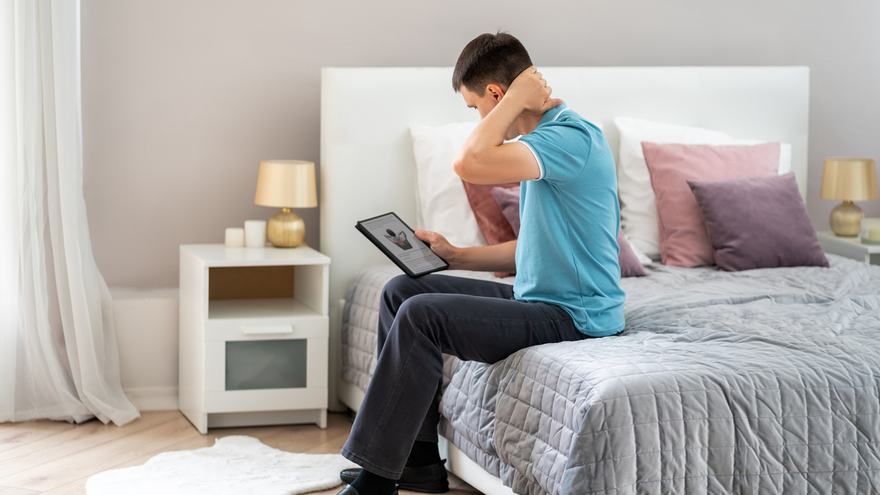 The prevalence of mild complications following steroid injections ranges from 5 to 35 percent of patients. Additional, more severe issues could be:

Surgical complications can include the following: 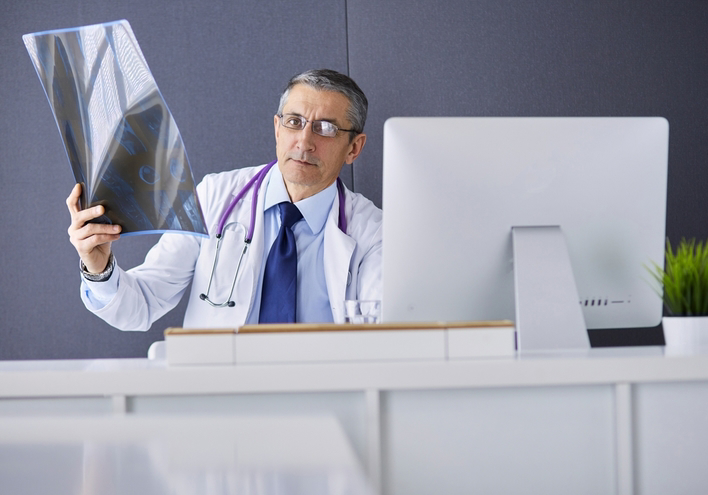 Due to enzyme resorption or phagocytosis of the cervical herniated nucleus material, the majority of patients' pain, limited motion, and radiculopathy usually go away on their own over six weeks. Additionally, there might be a shift in the extruded material's hydration or a decline in local edema, which would reduce pain and restore function.

Approximately one-third of individuals will continue to experience symptoms despite non-operative treatment. It becomes less likely that symptoms will go away on their own without requiring surgical intervention if they persist for longer than six weeks.

Similar to the filling of a jelly doughnut bursting through a weak spot in the strong outer wall, a herniated disc happens when the gel-like core of a spinal disc does so. When the disc material hits or compresses a spinal nerve, neck pain, arm pain, numbness, or tingling may develop. The first stage of recovery involves rest, painkillers, spinal injections, and physiotherapy. Most people get better in six weeks and resume their regular activities. If the symptoms persist, surgery can be suggested.